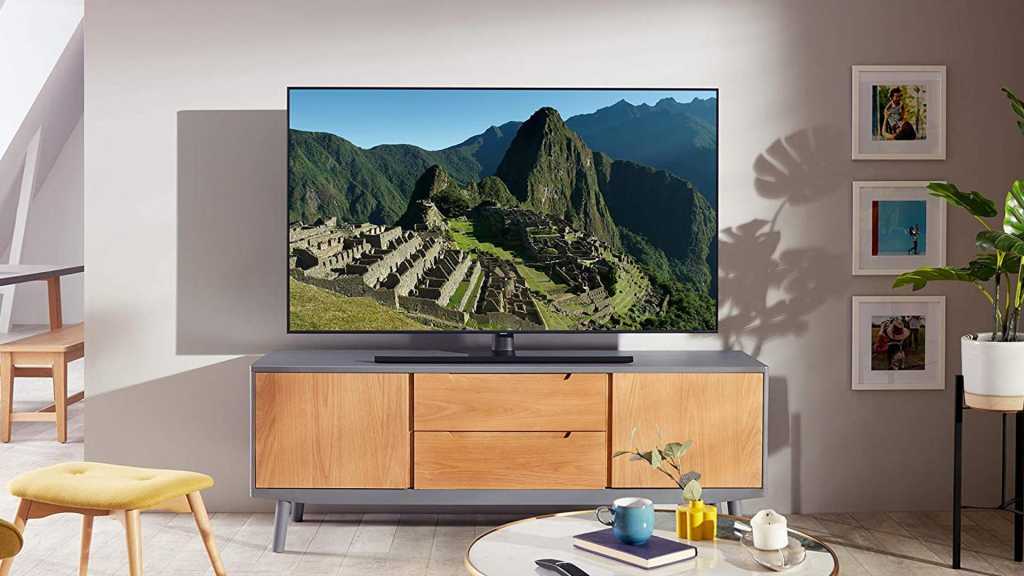 With high contrast HDR, 4K/120fps HDMI support and a versatile smart platform, this mid-range QLED screen could be the TV to tempt you away from OLED.

The Samsung Q70T is the cheapest QLED model in Samsung’s 2020 line-up to offer HDMI 2.1 for 120fps support, a big plus if you’re looking for a new 4K TV to partner either the PS5 or Xbox Series X.

As is typical, I’ve tested a 55in screen size (QE55Q70T) and the Q70T also offers bright, wide colour, Samsung’s advanced Tizen smart platform and support for dynamic HDR10+. That’s a lot of TV bang for your buck…

There may be differences behind the glass, but cosmetically the Q70T looks much like its QLED siblings including the Q90T flagship. The bezel is vanishingly thin, allowing the image to appear suspended in air above a central pedestal stand.

There are four HDMI inputs, one of which is eARC compatible, while the fourth is HDMI 2.1 promising that elusive 4K at 120fps support. All HDMI inputs support 4K 60fps.

Find out more in our Is my TV PS5 or Xbox Series X/S compatible? guide.

The Q70T comes with two remote controls, one a standard zapper, the other a simplified, slimmer stick.

As is Samsung’s wont, there’s no Freeview Play tuner on board (just regular Freeview HD), but we do get a full complement of mainstream catch-up services (BBC iPlayer, My5, All 4, ITV Hub), as well as Netflix, Amazon Prime Video, Disney+, Rakuten TV, Apple TV and YouTube, integrated into Samsung’s Tizen smart platform.

But it’s not just this smorgasbord of streamers that impresses and will mean you’re never without something to watch.

Mobile Multi-View with Casting allows you to watch two screens, namely the TV image and your smartphone, simultaneously on the screen. With your mobile as a POP (Picture Outside Picture), you can follow a YouTube tutorial, while playing a game, for example.

There’s also interoperability with SmartThings devices on your network – the screen can act as a control hub – and voice support. The set is compatible with Amazon Alexa and Google Assistant, as well as Samsung’s own Bixby.

Arguably Tizen’s coolest USP is Ambient mode, which effectively turns the Q70T into a huge digital photo frame. It also enables it to blend in with surrounding wallpaper design.

Vibrant, noise-free colour, pronounced contrast and clinical 4K detail have long been trademarks of Samsung QLED fleet – and that certainly applies to the Q70T.

New this season is an AI picture mode which automatically optimises the image, so you don’t need to manually toggle the usual picture presets, depending on what you watch.

This picture engine is an excellent up–scaler, and does a superb job when it comes to adding subjective detail to HD sources. Able to cross-reference content with an on-chip image database, it intelligently interpolates textures and detail, for astonishing clarity.

While the lack of Dolby Vision support continues to disappoint, the set does work with HDR10+ encoded content, as streamed by Amazon Prime Video – The Grand Tour looks stunning!

I measured HDR peak brightness at 600 nits. Enough for a discernible HDR experience, but not quite up there with the best QLEDs or OLEDS, which are closer to 1000 nits.

The Q70T’s lack of local dimming means it’s unable to offer really precise HDR, but that’s not quite as limiting as it sounds. You’ll see blooming around bright areas if you look hard enough, but it’s not intrusive, and you certainly don’t spot it when gaming.

Input lag is class-leading. There’s a choice of Game Motion Plus, which takes advantage of image processing to reduce blur and judder reduction, or a pure Game mode. They return figures of 19.8ms and 9.1ms (1080p/60fps) respectively.

Sonically, the set is a bit more perfunctory. It doesn’t have the brand’s OTS (Object Tracking Sound) seen on the Samsung Q80T, although it does boast Adaptive Sound which adjusts dynamically to combat ambient noises in your listening room.

The Q70T will bitstream Dolby Atmos out over ARC, so it’s ultimately worth partnering with an Atmos soundbar (Samsung has eARC models that are compatible).

The key difference between the Q70T and the step-up Q80T is that it lacks local dimming. Consequently, it doesn’t handle HDR quite as well as its more expensive stablemates.

But if you’re prioritising value, then the Q70T has the edge. The Q80T can be found at a similar price, but at a smaller 49in size.

Check our chart of the  best TVs to see what other options you have.

The Samsung Q70T is a sharp choice for buyers looking for a mid-range Ultra HD TV with excellent AI image processing.

I didn’t find myself overly distracted by the lack of local dimming, so it’s easy to rate this a good set for couch potatoes and movie fans alike.

For the price, it’s a hard package to beat.