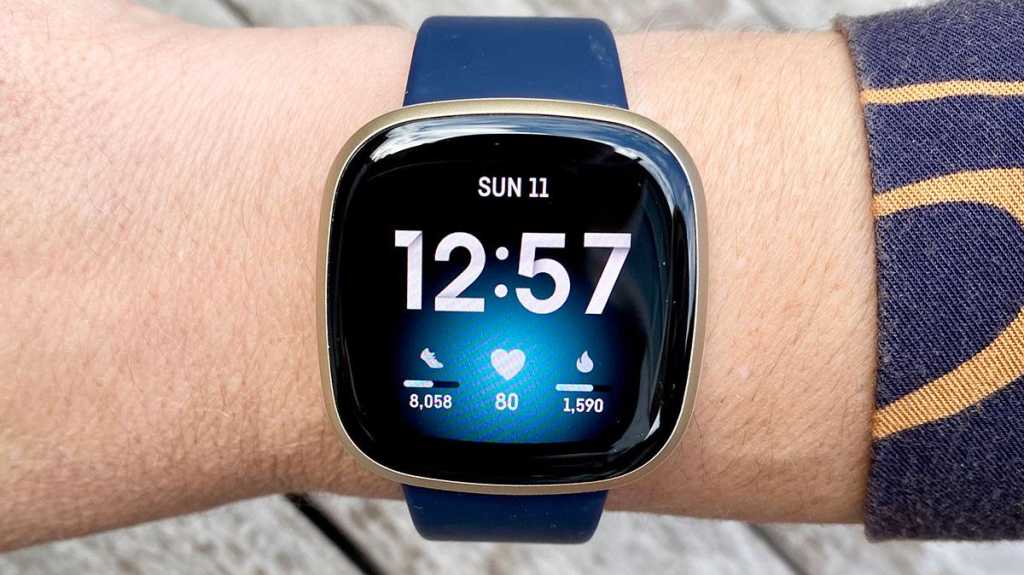 With the addition of a built-in GPS, fitness fanatics will enjoy the Versa 3 as a major upgrade to the previous Versa and Versa 2. And on-wrist calls mean Fitbit is catching up with the Apple Watch. It’s even better than the Versa 4!

The Versa 3 is Fitbit’s best fitness smartwatch, bested in its features only by the even more premium, health-focussed Fitbit Sense. It is even better than the Versa 4, which is supposed to replace it. Before we review the Versa 3, it’s worth looking at its value compared to newer and supposedly better Fitbit smartwatches.

The Fitbit Versa 4 might be newer but is actually inferior to the Versa 3 as it lacks some of its predecessor’s features, such as Google Assistant and music controls. Fitbit has also removed third-party apps such as Spotify. There weren’t many apps available but to remove them altogether does not make the Versa 4 a better smartwatch.

The Versa 4’s new tile-based interface also removes some basic features that remain with the superior Versa 3, which is $30/£30 cheaper into the bargain. One of my favorite metrics is the 250 steps an hour prompts. On the Versa 3 I can see how many steps I’ve completed in the current hour, where the Versa 4 doesn’t show this until 10 minutes before the hour’s up.

In summary, buy the Versa 3 over the Versa 4. It’s cheaper and boasts more features.

The Versa 2 is even cheaper but lacks the Versa 3’s built-in GPS, calls-on-wrist functionality and several other features, so the Versa 3 is the one to buy.

In terms of fitness features the Versa 3 and Sense are equals, but the Sense adds new health-related features including EDA stress management and ECG heart measurement. You’ll learn more in both our Fitbit Sense review and Fitbit Sense vs Fitbit Versa 3 comparison.

Fitbit has also hobbled its latest Sense 2 smartwatch, which has little over the original Sense—leaving us happy to still recommend the Versa 3 over both the Sense and Sense 2.

The Versa 3 boasts plenty of health features, too: in many ways it mirrors the Sense and Sense 2; it just doesn’t go into the rarified medical complexity you get with the upper-end smartwatch.

In some ways, this is a less-is-more advantage. The Versa 3 is less overwhelmed with medical features and focuses firmly on fitness, at two-thirds of the price.

The Versa 3 wins again. Read on for why we love it so.

The squircle (squared circle) Versa 3 boasts a bright AMOLED screen that is similar to the previous Versa screens, but larger—1.58in with a 336×336 resolution—and more curved, so it looks a little softer.

By comparison, the Versa 2’s screen measured 1.39in, with a 300×300 resolution. The larger screen means the Versa 3 is larger overall too, but only fractionally so.

You can opt to keep the display in a basic-face Always On mode, which is preferred when you need immediate access to your stats during workouts, runs, and bike rides for instance—but this will decrease the Versa 3’s battery life.

It’s impossible not to compare the Versa 3 with the Fitbit Sense because the two are so similar in design. The Versa 3 lacks the Sense’s stainless-steel ring that is used for the EDA stress and ECG heart measurements. Otherwise, they are pretty much identical looking except for colour options.

As the design is the same as the Sense, you can also buy from the same wide range of accessory straps: five Sport, six Woven, three Knit and four Leather bands, plus four choices of Infinity Band.

I’m not a big fan of the new Infinity Band that replaces the more secure tang-buckle strap found on the Versa and Versa 2. The Infinity Band’s peg-in-hole connection just doesn’t feel as strong as the buckle.

The bands are swappable, and thankfully this process is a hundred times easier than the Versa and Versa 2’s fiddly metal-bar arrangement. Now, you just push down on a raised tab and click the bands in and out.

Like the Sense, the Versa 3 features a vibrating solid-state haptic button rather than the physical button on the previous Versa models. It’s only really for powering on, as you navigate by swiping left or right or up and down. You can also set customisable shortcuts via button presses. These can go straight to apps such as the Alexa voice assistant, Music, Alarms and so on.

The watch itself and the silicone Infinity Band are water-resistant up to 50m, although some of the accessory wrist straps are less so.

What does the Fitbit Versa 3 do?

And it goes a lot further, motivating you to look beyond 10,000 steps as your goal, and push yourself harder with targets for Active Zone Minutes, where you earn points for moving into the recorded heart-rates zones: Fat Burn, Cardio and Peak.

All this is excellently displayed on the big, bright screen, and in more depth in the Fitbit mobile app.

Its hero new addition is the built-in GPS, which was lacking from earlier Versa models. More sporty fitness users will relish this as they no longer need to carry their phone around with them for GPS pace and distance stats and maps of their workout routes.

Fitbit’s SmartTrack feature will, after 15 minutes activity, automatically recognize and record most exercises if you don’t set them via the watch.

Fitbit is the world beater when it comes to sleep tracking, and you get detailed stats on not just the length of your sleep, but its quality (scored out of 100) and how long you are in each of the measured sleep stages: light, REM, and deep.

While it lacks the Sense’s stress-management score and tools and ECG app, Fitbit has hinted that the skin temperature feature will be added to the Versa at an unspecified date.

It also has a SpO2 monitor that measures blood oxygen levels that can indicate health issues such as allergies, asthma, or sleep apnea. This will be an indicator only, so if the Versa 3 data suggests low blood-oxygen levels you should consult a doctor and undergo more in-depth polysomnographic investigation.

Fitbit’s SpO2 tracking isn’t as sophisticated as Apple’s on-demand SpO2 readings on the Apple Watch or on the Withings ScanWatch. Fitbit takes its readings overnight only, and takes a while to show the score in the morning.

Fitbit used to require users to change the Versa 3’s clock face to the SpO2 setting that’s required to take a reading—but with the Fitbit OS 5.2 update, your nightly average SpO2 value and the range from your previous night’s sleep can be viewed on your Fitbit device.

Also, originally a Premium-only feature, Fitbit has now given Versa users access to their 7-day health trends in the on-app Health Metrics tab. Premium users get to see their 30-day trends, too.

Previously available only on the Fitbit Sense, Versa 3 users now get on-wrist and in-app notifications if their heart rate hits certain high or low levels—users set their own thresholds. If you receive a heart rate notification, you can take a survey in the Fitbit app to help you better understand what’s going on.

The Sense goes further, but that level of medical metrics might not be what you require from what is principally a fitness device. Some might find the Sense health feature set to be more than they care to use, and a lot of it also relies on subscribing to Fitbit’s £79/$79 annual Premium service.

Once you’ve checked a few times that you don’t have an irregular heartbeat or sleep apnea, do you really need the function again?

Read our full feature to learn more about all the Fitbit scores and measurements.

While it lacks the thousands of apps you’d have access to with an Apple or Wear OS smartwatch, the Fitbit Versa 3 is first and foremost a fitness tracker and excels on this level.

You do get the basic features that most smartwatches offer, including probably the most useful, notifications: Caller ID, texts, and popular messaging apps.

Apple keeps the best for its own Apple Watch, so only Android users get the Quick Replies and Voice Replies functions, as well as the ability to respond to text messages with voice-to-text commands.

That said, the new built-in speaker (plus microphone, of course) lets you take calls from your wrist via Bluetooth connection to your phone, as well as send incoming calls to voicemail and control volume, all from the watch.

This feature worked surprisingly well. Calls were clear at both ends.

The integrated voice assistants now allow audible replies. Like the Versa 2 before it, the Versa 3 features Amazon’s Alexa, and—in the US, UK and some other major English-speaking countries—Google’s voice-activated Assistant.

For example, you can check the weather, set reminders and alarms, control smart home devices and more, with real-time audible responses in addition to the existing speech to text on-screen.

Like the Versa 2 before it and the Sense above it, the Versa 3 features 2.5GB of storage space, although with the significant limitation that this works only with Pandora and Deezer for music. Fitbit’s music-storage capabilities actually appear to have gone backwards with the Versa 3 and Sense.

It does, however, let you control Spotify Premium music playlists via a nearby paired phone—and some basic controls when using Apple Music and Audible, which Fitbit doesn’t mention but they work fine.

This is nowhere near as accessible as on the Apple Watch. If you’re connected to Wi-Fi or mobile data, you can stream Apple Music, podcasts and audiobooks, even when away from your iPhone.

You get 6+ days battery life with the Fitbit Versa 3, just like you do with the Sense.

Battery life, of course, is dependent on your usage. Utilize the built-in GPS, and the battery will fade much faster. Switch on the always-on display feature, and battery life will halve despite the screen turning to lower-power features.

But six days is still an impressive battery performance, especially when you note that even the latest Apple Watch 6 has an 18-hour battery life—making things like sleep tracking a league below the level of Fitbit’s.

The Versa 3 also features Fitbit’s new fast-charging function that gets you 24 hours of battery life from just 12 minutes of charging—ideal if you wake up to a faded fitness tracker.

And the charger itself is magnetic and a lot smaller than the old chunky Versa/Versa 2 charging clasp. 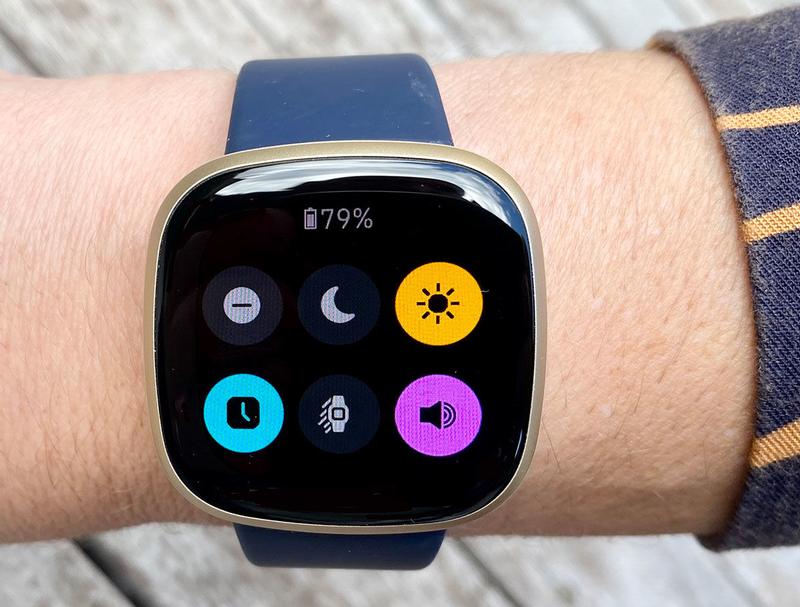 It’s cheaper than the Apple Watch SE. We prefer the Fitbit for all-round fitness tracking but Apple is getting closer and beating in other areas, although with a lamentable battery life that makes sleep tracking frustrating.

You can still buy the older model Versa 2 at a discount if you’re happy to live without the new built-in GPS, claimed more accurate heart-rate sensor, speaker, and Google voice assistant; for more details, read our Fitbit Versa 2 vs Versa 3 comparison.

Notably, the Versa 3 is noticeably cheaper than the top-end Sense. That $70/£80 price difference is a lot, and most of what you lose, we suspect you won’t miss after your first few experiments with the Sense’s extra micro-health features.

With the addition of a built-in GPS, sporty fitness fanatics will enjoy the Versa 3 as a major upgrade to the previous Versa and Versa 2. It’s even better than the Versa 4!

If you can live with running or biking using your phone’s connected GPS, there isn’t a huge imperative to upgrade from the Versa 2. But as a new fitness watch, it’s a compelling option, especially now it boasts both Alexa and Google voice assistants and phone calls from your wrist.

Where we think the Versa 3 really wins is being a third cheaper than the top-end Fitbit Sense, and so offers great value if your main priorities are fitness and core smart features rather than a ton of possibly overwhelming—and underused—health stats.