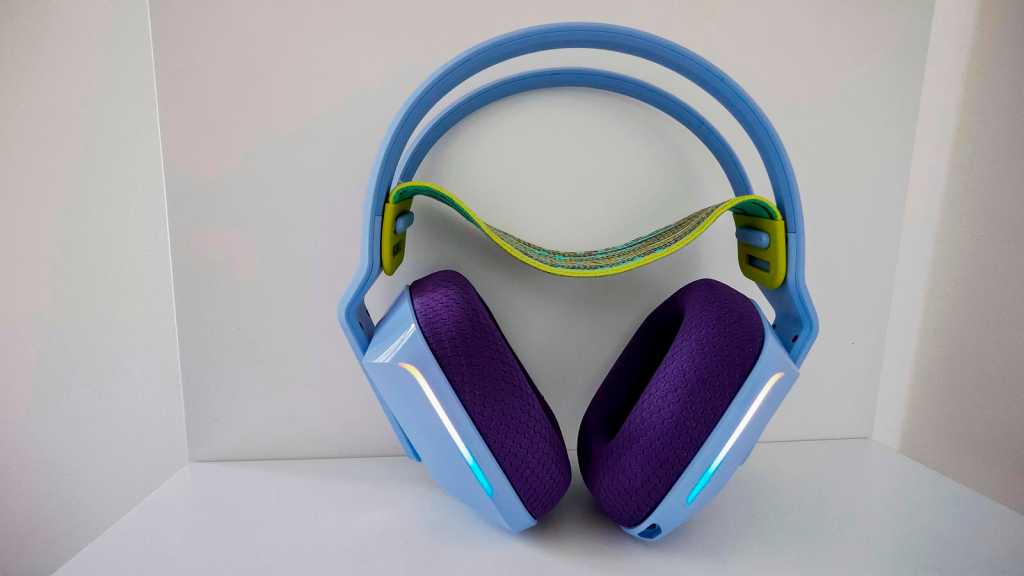 The Logitech G733 Lightspeed not only looks amazing, but it’s comfortable and produces some punchy audio – and it does it all for a desirable price tag.

Without a doubt, the Logitech G733 Lightspeed Wireless Headset is one of the most interesting and unique pairs of gaming headphones we’ve seen when it comes to design – finally a farewell to the same old rugged monochrome looks that have been repeated for years. But is the pretty exterior matched by equally powerful performance?

I’ve spent some time with this pair of headphones, using them for gaming, video calls, music and streaming. Read on for my full thoughts.

Alright, let’s get it out the way with – this is a lovely looking set of cans. That’s mainly down to the vivid colour selection that Logitech has on offer for the G733 Lightspeed Wireless Headphones. I tested the lilac pair, but you can also get the headset in blue, white and black.

The G733 comes equipped with a bright and contrasting fabric strap that’s designed to help the headphones sit better on your head. Each model comes with different colour combos – if you have several pairs you could even swap and change for various looks. 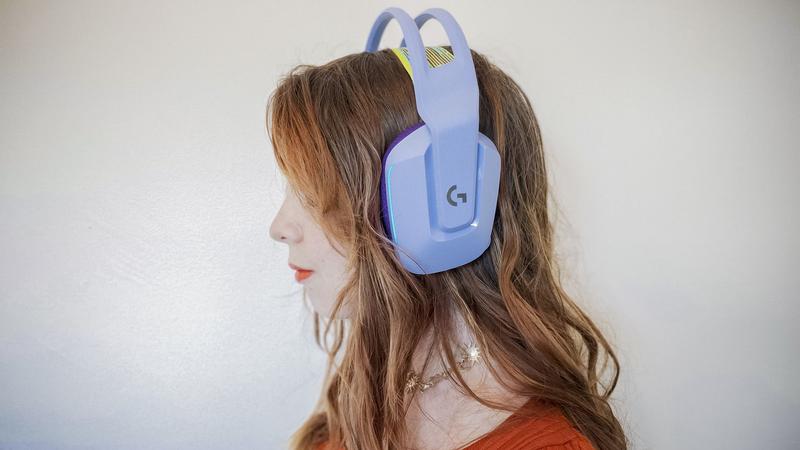 The headband itself can only be adjusted to one of two sizes. Whilst it sat comfortably on my noggin, I imagine that other people may struggle with the limited options. For future, I would suggest that Logitech investigate changing the mechanism to a ladder lock like those used on backpack straps so the user can adjust the tension to a custom length.

The frame is made of matt plastic, with two sturdy bands that sit on top of the head for a striking finish. The exterior of the earcups is made from the same material, bar the edges which have a shiny look instead. The fronts also feature LED multi-colour changing lights that can be altered for different patterns or turned off entirely for a more minimalist look.

The earcups are made from a breathable memory foam that creates a reasonably tight seal around the ear. These can also be adjusted up and down, but don’t swivel to easily pack them away.

Overall, the headset is extremely comfortable to wear, even for hours on end. I would say that when wearing glasses, I had to adjust the frames slightly to not dig in, but this only became noticeable after around a couple of hours’ use. It’s also lightweight, coming in at just 278g. 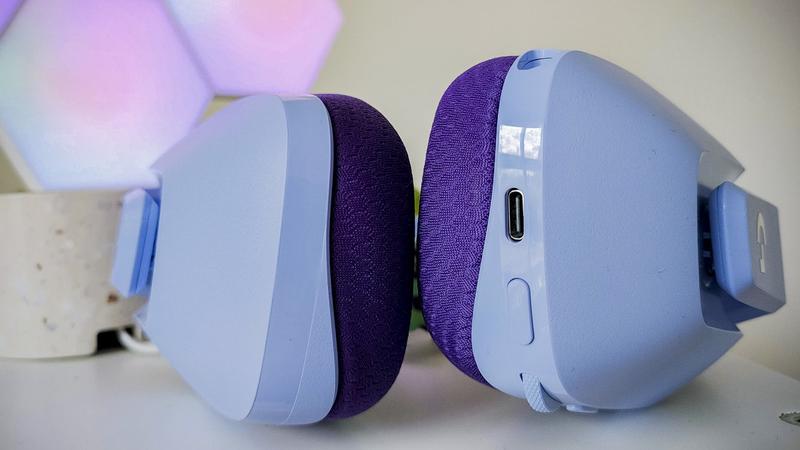 On the left earcup you get the power button, a volume dial, a mute button (though the function of this button can be altered in the Logitech software) and a jack for the accompanying – and removable – boom mic. The microphone itself is slightly bendy, which means you can shape it to suit your preferences, but the flexibility is limited.

The G733 runs on Logitech’s Pro-G 40mm driver, which produce rich and clear sound, along with thumping bass when playing action games or listening to electronic music. Of course, if the standard levels don’t suit your tastes, you can toggle with them further with the optional software from Logitech.

The Logitech G Hub software is where customisability over the audio comes into its own. Here you can turn on the DTS Headphone X 2.0 surround sound, which is where the audio truly shines. You can also adjust bass levels up and down – personally for the best gaming experience I recommend dialling this up to full. 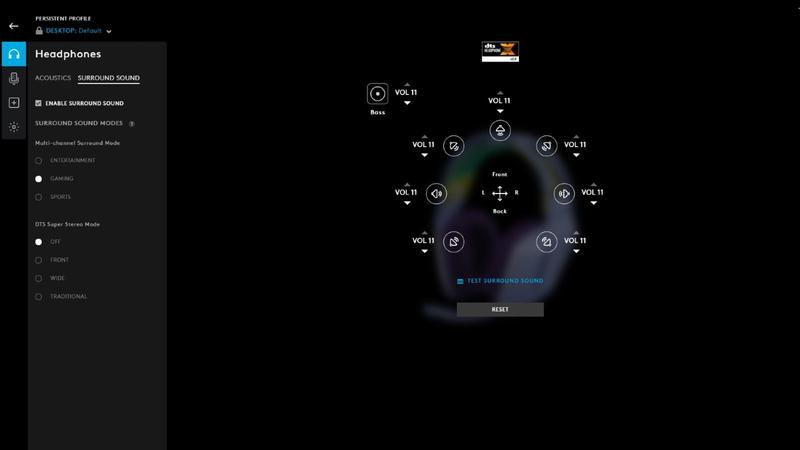 You do get the option of changing between set modes for entertainment, gaming and sports – but in all honesty it was hard to find discernable differences in the audio here. If full surround sound isn’t your bag, you can change the output points to your own preferred setup.

The seal on the cups isn’t completely tight, so you do get a little bit of outside noise coming in if you don’t have the audio blasting. However, the quality output is still detailed and rich enough to keep you immersed. 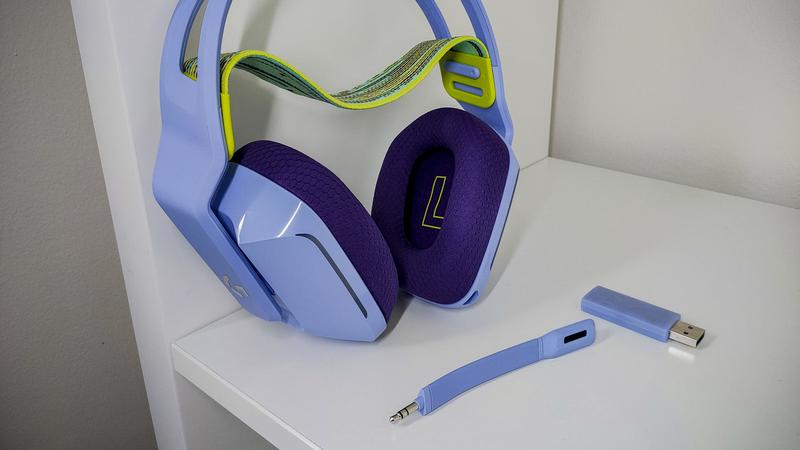 Some headsets must make a compromise somewhere, and here it’s with the boom microphone. Whilst you can still hear what you’re saying, the sound is fuzzy and generally not the best quality. However, despite being omnidirectional, the mic doesn’t pick up any background gaming noise, even when turned up high.

If you’re just using it for chatting during games then it will work fine, but if you’re streaming we suggest investing in a dedicated separate microphone for the best audio output.

Of course, you can still have some fun with the microphone. By enabling the Blue Voice software, you can alter the preset of your output audio, which essentially changes your voice – one setting makes you sound like an old-time radio presenter. It’s a neat little feature, and may prove useful for people such as YouTube creators. 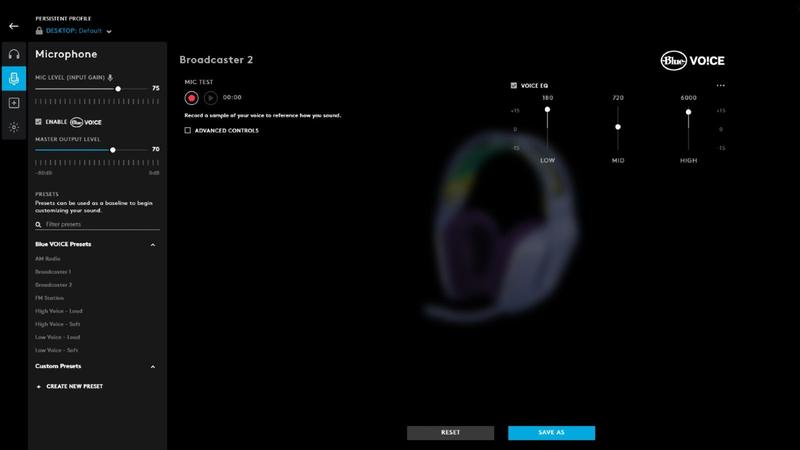 The battery life is also nothing to be sniffed at. Logitech claims 22+ hours on average, and testing seemed not far off this number. After around five and a half hours, the headset had dropped by around 24%. However, this was using the microphone and having the lights on consistently – so less demanding usage will drain it slower. 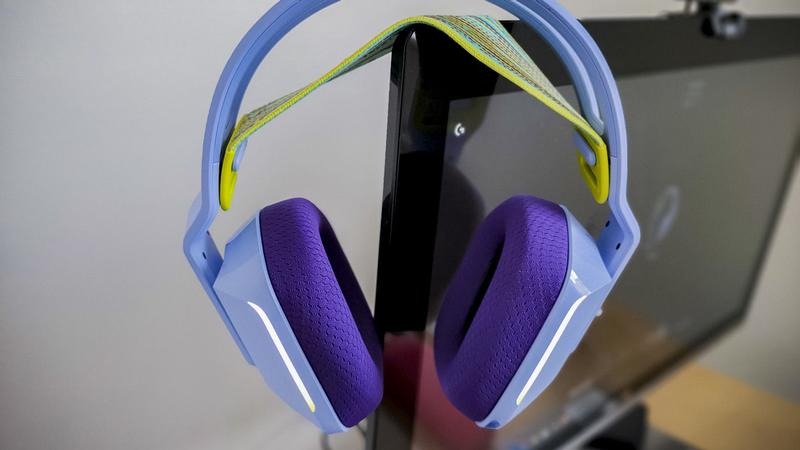 The G733 Lightspeed is compatible with PC, Mac, PlayStation 4 and the Nintendo Switch when docked. Sadly there’s no Xbox One combability, and the headset is wireless-only – there’s no way to connect it to a device for wired audio. In addition, the G Hub software (and thereby extra sound customisability) is only available on computers.

The striking design would have you think that this headset costs a lot, but the price is actually in line with other gaming rivals, at an RRP of £129.99/US$129.99.

In the UK, you can currently bag them directly from Logitech, or alternatively they are in stock on Amazon, Currys and GAME. In the US you can also get them from Logitech, as well as Amazon US and Best Buy.

Logitech also offers the G203 and G305 gaming mice and G915 TKL keyboard for those who wish to have a fully uniform PC setup.

Whilst this isn’t by any means cheap, it’s still competitive. If you’re not bothered about the colourful design and would prefer more customisable audio and compatibility with Xbox, then it’s worth looking at the Turtle Beach Elite Atlas Aero. You can see other options in our chart of the best gaming headsets. 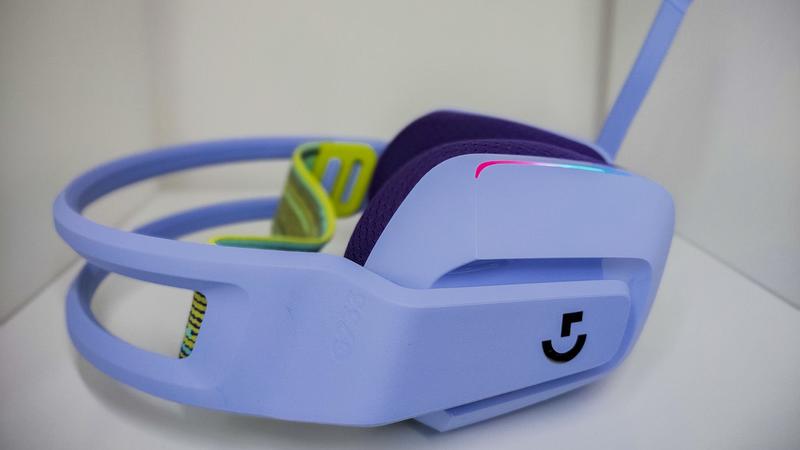 With a dreamy colour scheme and a desirable price, it’s hard to ignore the Logitech G733 Lightspeed Wireless Headset. Its shaking up the market when it comes to gaming peripherals.

But this isn’t completely a case of style over substance – you’ll still get a great gaming audio experience. However, be aware that the shape of the headset may not suit everybody, and the microphone isn’t the best.

All in all, if you’re after a pair of gaming headphones that make a statement and perform well without breaking the bank, these are the ones for you – especially if you’re a streamer or content creator.