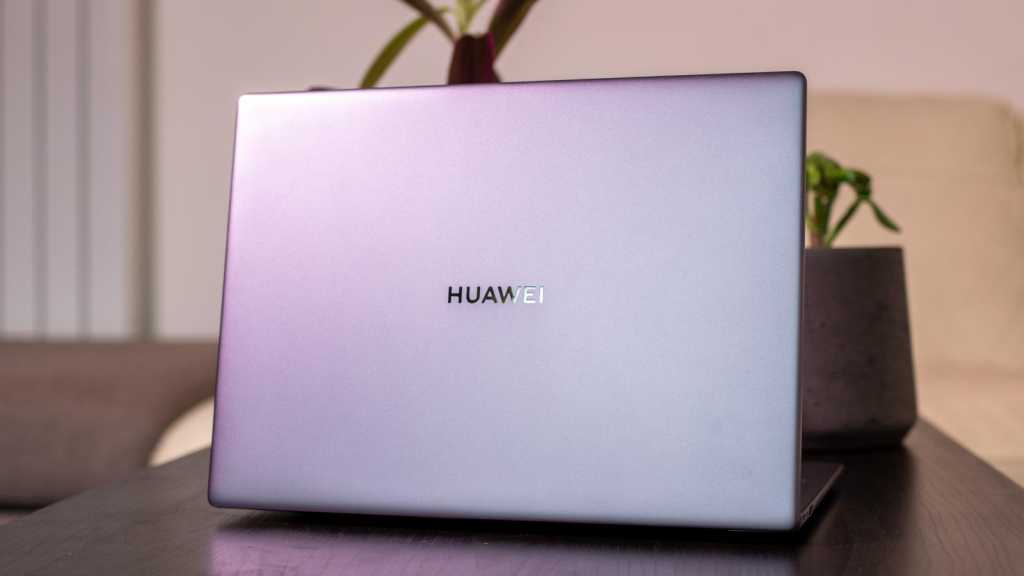 Huawei has once again delivered tremendous bang for your buck in the 2020 MateBook 14, especially in the UK’s overhauled AMD models, which will outpace some laptops at double the price – so long as you don’t need a GPU.

Ever since the first MateBooks arrived with strong specs and an attractive – if familiar – aesthetic, Huawei has been steadily refining the design and building up a range of laptops that are competitive at almost every price point. So we come to the 2020 MateBook 14, which looks much like last year’s model but packs in more power, jumps from Intel to AMD, and improves Huawei Share support.

Oh, and in case you were worried: yes, the MateBook 14 runs Windows 10, and you can access Google just fine.

Huawei has stuck to its tried and tested design language with the 2020 MateBook 14, which is basically an attractive, conservative design that still looks faintly like a MacBook.

The chassis is essentially unchanged from the 2019 model, though that’s no bad thing. It means you get a fairly slim, petite machine despite the 14in display, at just 15.9mm thick and a weight of around 1.5kg.

It’s not as slender or light as the company’s flagship MateBook X or X Pro, but it’s also substantially cheaper than either, and packs in more ports too. It does feel a little heavy though, especially compared to rival devices from Acer and Asus – likely thanks to Huawei’s choice of materials.

The bulk of the body is made out of an aluminium alloy (though the hinge and port covers are plastic), and it’s finished in a dark Space Grey (though some countries get a lighter Mystic Silver option), for an end result that isn’t exactly eye catching, but looks sleek and modern. It’s restrained enough to seem professional but slick enough that you’ll still want to show it off a bit.

If that resolution sounds a little odd, it’s because this screen is in the 3:2 aspect ratio, rather than the more familiar 16:9. It’s a taller, boxier display that gives you extra vertical real estate – a particular boon for productivity, which is really where the MateBook 14 feels focussed.

If you mostly want a laptop to watch Netflix the screen may frustrate, as you’ll always have black bars above and below whatever you watch, but if you spend your days on email and Excel – or even more demanding creative or technical software – the extra scrolling space will quickly become your favourite thing about this laptop.

The display itself is bright, with good contrast and colour range, though like Huawei’s other laptops it suffers from an especially reflective finish. That means that despite good peak brightness it still struggles in direct sunlight, as there’s not much you can do to avoid intense glare.

It helps that with slim bezels the screen almost always looks the part. There’s a 90% screen-to-body ratio, with particularly slim borders around the top and sides – though there’s a chunkier bottom bezel where the Huawei logo sits.

Huawei’s keyboards don’t quite reach the lofty highs of the best on the market – that’s the Dell XPS 13, for my money – but they’ve been quietly excellent for some time now, and the MateBook 14 is no exception.

The full-size keyboard reaches almost from edge to edge, and looks as sleek and simple as the rest of the design. Key travel is relatively short, but it’s comfortable, quiet, and satisfyingly tactile.

It also boasts what’s become a Huawei trademark: a hidden webcam. Huawei installs its webcam below a fake function key, which pops up when you press on it. A few years ago this felt like a smart way to save space on the display bezels and ensure privacy, hiding away a rarely used feature.

Things have changed though. For one, other manufacturers have shrunk webcams down to fit above screens without compromising the design; more importantly almost all of us now spend much more time on camera than we used to, and an upwards-facing webcam that gets blocked by your fingers when you type has gone from minor annoyance to genuine grievance.

The trackpad at least is an unmitigated joy, with an expansive surface area and multi-touch support. Huawei has also managed to move the Huawei Share tag underneath the trackpad, which saves you from an unsightly sticker and feels more streamlined. More on what that actually does down below.

Ports are another strong suit. You’ll find two USB-A 3.2 ports, one USB-C (used for charging), an HDMI port, and a 3.5mm headphone/microphone jack. It’s a shame there’s no microSD card slot, but otherwise you’re getting just about everything you could hope for in a laptop this size.

As for other connectivity, there’s Wi-Fi of course, but no support yet for the new Wi-Fi 6 standard. Bluetooth is also on the slightly older Bluetooth 5.0 standard, but that doesn’t matter so much.

A fingerprint sensor is embedded in the power button, and it can scan your print while you turn the machine on – so that theoretically, pushing the button once should both boot the PC and unlock it. This mostly works, though occasionally I did have to re-scan my finger to log into Windows.

As is fairly common in laptops, the speakers are located on the underside of the body. On a desk that’s fine, but if you’re using the MateBook 14 on your lap or in bed, audio quality noticeably suffers.

Under the hood is where things get more interesting. In the UK Huawei is only releasing an AMD-powered version of the 2020 MateBook 14, which is what I’ve been testing, though elsewhere in Europe you might have an Intel option.

If you’re opting for AMD, the choice is between the powerful H-series Ryzen 5 4600H or the Ryzen 7 4800H CPU, while Intel users get to pick between an i5-10210U and an i7-10510U. The AMD CPUs are undeniably stronger performers, but there is a tradeoff: if you opt for Intel you’ll get an Nvidia GeForce MX350 GPU too, while the AMD options are limited to integrated graphics only.

Either way, RAM is either 8GB or 16GB, though AMD models use DDR4 while the Intel models still use the slower DDR3 standard. Both models get up to 512GB of SSD storage.

I’ve been reviewing the top-spec UK model, with a Ryzen 7, 16GB of RAM, and 512GB storage. The bottom line is that performance is fantastic, especially considering the price, and the MateBook 14 will comfortably handle most things you throw at it.

AMD’s integrated graphics tech remains surprisingly robust, and so the MateBook even holds its own on the 3DMark graphics benchmark, but the limitations are clear – it was actually outperformed by last year’s model, with a Core i7 and MX250, despite comfortably beating that model on the PCMark computing test.

Huawei has also used the AMD chips as an excuse to redesign the MateBook 14’s cooling setup, and with impressive results. Even at full whack it runs quiet and cool, meaning there’s not much cause for concern around performance throttling – or around using it on your lap.

Ultimately, if you’re looking for a device for graphically intensive tasks – be that gaming, video editing, or complex 3D modelling – you should probably look elsewhere. But for just about anything else, you won’t find much more power than this in a laptop, and certainly not in one this compact.

The 56Wh battery in the MateBook 14, combined with the power efficiency of the AMD chips, basically makes it an all-day device. I’ve comfortably used it for a full day’s work without stressing about the power cable – though bear in mind that I would expect battery life on the Intel versions to be a little lower.

As for charging, the included 65W charger topped the battery back up by 45% in half an hour – so it would probably take an hour or so for a full day’s charge. Helpfully it’s a compact charger, no larger than most phone ones, and since it’s USB-C it will handily also charge most phones, saving you carrying around separate plugs.

As I said above, Huawei’s laptop line is currently unaffected by the ongoing US trade ban, thanks to a special exemption for Microsoft. That means the MateBook 14 ships with Windows 10 and it runs just like any other Windows laptop, with all the same software, security, and access to Google services.

You also get a little extra if you use other Huawei devices, as the company works hard to build up its hardware and software ecosystem, principally through Huawei Share.

As I mentioned above, this tech has now been moved under the trackpad. That means that if you own a compatible Huawei or Honor phone you can now hold it over the trackpad briefly to connect it to the laptop.

At that point you can drag and drop files between the two devices, work on phone files from the laptop, and mirror your phone’s display to the laptop screen so that you can actually use it like an app within Windows, using your mouse to click and your keyboard to type WhatsApp messages.

It’s a convenient touch, but of course only useful if you already use a Huawei or Honor phone. And since their latest handsets don’t support Google software, unfortunately the odds are that you don’t.

The 2020 MateBook 14 is available for either £749 or £949 in the UK, and you can buy it direct from Huawei, or from Amazon, Very, AO, or Littlewoods. Unfortunately, like all Huawei products, it’s not available in the US at all.

£749 gets you a Ryzen 5 with 8GB of RAM and 256GB storage, while £949 gets you the faster Ryzen 7 with double the RAM and storage – that’s the model I’ve been testing. If you can afford it, you’ll definitely see a noticeable performance bump from the pricier version, but both offer impressive value for money.

At this price, honestly the main competition is from Huawei itself. The MateBook D14 (note the ‘D’) is available from just £549. It sports a slightly slower U-series Ryzen processor, and the design and display are definitely less premium, but for many the D14 will suffice.

I think the design improvements and extra performance here justify the upgrade for those who can afford it though, especially anyone with serious productivity in mind – the combo of the H-series Ryzen chips and that 3:2 display are hard to beat.

For more options, check out our ranked guide to the best laptops we’ve reviewed.

Huawei has once again delivered tremendous bang for your buck in the 2020 MateBook 14, especially in the UK’s overhauled AMD models.

The H-series Ryzen chips deliver the best performance you can find in a laptop for the time being, and will outpace the silicon in some laptops at double the price.

The design is slick, modern, and unfussed, bolstered by an excellent display and a good array of ports, and it’s fairly thin – if a little heavy for a laptop its size.

The only real downsides are that unfortunate webcam placement, the lack of a GPU option in the AMD models, and the fact that its coolest software feature – Huawei Share – is inevitably of limited use since you’re probably unlikely to pair it with a new Huawei phone.