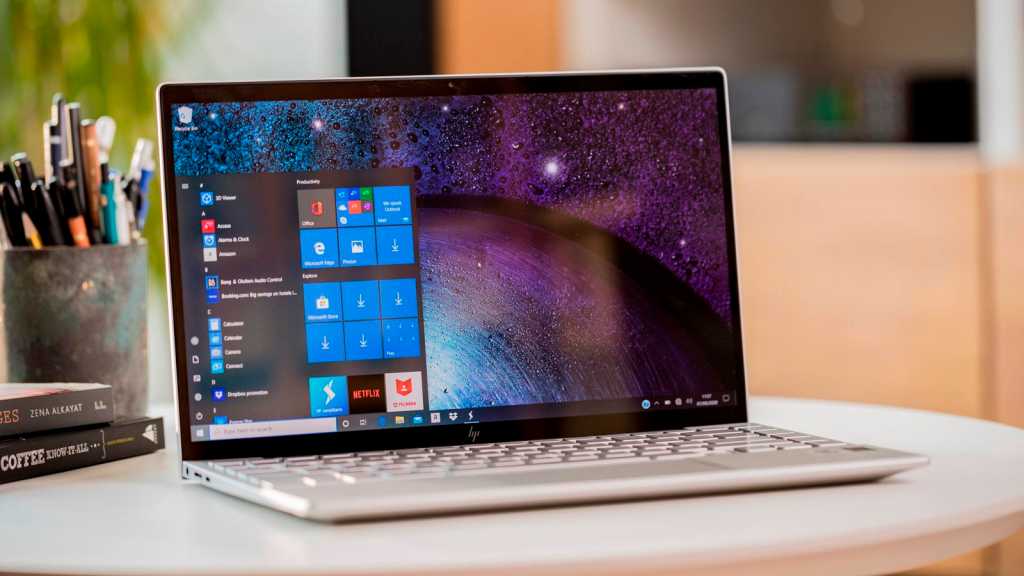 The HP Envy 13 (2020) is premium, powerful and portable – and minor niggles don’t detract from this great all-rounder laptop.

The HP Envy 13 (2020) is a true all-rounder laptop with a slim design, large display and lots of storage space. But whilst these figures look good on paper, how do they match up in real-life performance?

I spent some time with this laptop to see how it performs in everyday use – working from home, gaming and doing creative tasks such as video editing. Find out how the laptop holds up below:

The best thing about the design of the HP Envy 13 (2020) is undoubtedly the 13.3in Full HD (1920 x 1080) IPS LCD screen, which comes with slim bezels that provide an impressive 88% screen-to-body ratio. It’s enough to make this laptop perfect for anyone looking to stream Netflix or watch YouTube.

The rest of the laptop is clean and neat – if a little bland in comparison to some rivals. It’ll also feel familiar to HP fans, with a silver, sandblasted anodised finish and an easily portable size – weighing in at just 1.3kg.

The HP Envy 13 (2020) has a metal chassis that feels sturdy and durable. Like the 2019 variant of the HP Envy 13, the trackpad is made from plastic rather than glass, but it still looks neat and is responsive to touch and gestures.

On the keyboard you get an adjustable backlight – handy for working in those darker evenings. The keys themselves have a nice decompression and give a good bounce back – I had no issues typing. If I’m nit-picking, some of the keyboard shortcuts are in odd places (Print Screen was bundled onto the Shift Key below Enter, for example) but otherwise there’s no nasty surprises here.

The in-built fan system does keep the device cool when needed, but it’s noisy and sensitive. Even simple tasks such as downloading documents kickstarted the fan into action.

The HP Envy 13 features a Bang & Olufsen sound system, which is punchy and produces good levels of bass. The downside is that the speakers sit on the bottom of the laptop (on the previous year’s version, they were on top), so if you have the laptop on a bed it will muffle the sound.

One thing that may be a plus to users is the privacy settings included on the HP Envy 13. Not only do you get a dedicated fingerprint scanner, but you also get buttons to toggle off the webcam and microphone – in case you’re worried about them being hacked.

You also get an integrated privacy screen, which basically means that if you have information on the screen that you don’t want to share with people around you – such as bank details – you can tap a button and the screen will darken. This works best for text, rather than videos or images.

As built-in webcams go, the 720p one on the HP Envy 13 is relatively clear and the quality is good enough for any video meetings or calls you need to take. The audio on the built-in dual microphones is on the muddy side though – if this is a concern, I suggest either using a headset or a USB microphone.

Surprisingly, the laptop features an AC smart pin slot for charging, rather than USB-C. This means that if you’re carrying it around in your bag, you’ll have to carry a dedicated and bulky power adapter with you. There is still a Thunderbolt 3 USB-C slot, but this is for file exchanges and charging separate devices rather than juicing up the laptop itself.

Other ports include two USB-A slots, a headphone jack, and a microSD card reader. Sadly, there isn’t a HDMI port on this laptop.

The display is a touchscreen, which is useful for swiping for shortcuts – but does seem a little redundant considering that the Envy 13 isn’t a 2-in-1 device. You most likely won’t find a lot of use for the touch screen. In the UK 4K isn’t available, but you can get this in other markets, including the US.

The HP Envy 13 has an extremely bright display – with a max of up 1,000 nits. However, it’s a reflective panel so there’s plenty of glare, especially if you’re using this device outside under bright sunlight, which is a bit of a downside. In addition, turning the screen up to max brightness drains the battery life very quickly.

The HP Envy 13 (2020) is available in three different models in the UK, running on either an Intel i5 or i7 processor, with RAM between 8GB and 16GB, storage up to 1TB and the option of a dedicated Nvidia GeForce MX350 graphics card on the highest spec version.

In the US, specs are customisable depending on what you want – you have the option of omitting the touchscreen altogether, forgoing the privacy filters, including a dedicated graphics card and trading out the Full HD screen for a 4K one.

We tested the mid-level HP Envy 13 (HP Envy 13-ba0006na), which runs on Intel’s Core i7-1065G7 processor and houses integrated Intel Iris Plus Graphics. Combined with 8GB RAM and 1TB worth of storage, there’s plenty of room to download games and software and store documents over time.

The mid-spec laptop is basically a happy medium for those want a device that is capable of the odd game or editing, without sacrificing on a lightweight design. You can see how it performed in our internal benchmarks:

It is worth noting I used a basic video editing program (Adobe Premiere Rush) and had a few issues continuing to run it after several hours of continued use. Therefore, I’d suggest that if you wish to game regularly – or take on a heavy-duty task – it’s worth going for the highest spec HP Envy 13 which features a dedicated GPU that the lower versions do not.

I played Planet Zoo with the graphics set to ‘ultra’. Frame rates did drop during animated scenes, but once you were in the active gameplay it still managed to run relatively okay. Still, for the fastest gameplay its best to drop down to medium/low, as after all this isn’t a dedicated gaming machine. The laptop did also get hotter after around an hour’s worth of playtime.

The cheapest version doesn’t have the same capabilities as its two sister models due to the lower spec i5 processor – but if you don’t plan on gaming or using demanding software this is still a good option.

Battery life on this laptop is enough to keep you going throughout the day. Under our internal benchmarks, it achieved a respectable 10 hours and 12 minutes – very close to HP’s own estimate on average battery life.

Charging isn’t half-bad either, with just a quick 30 minutes taking it to 53%. Around an hour will take it from flat to full. You’ll also have no issues with connectivity with the HP Envy 13, as it comes with a combination of Wi-Fi 6 (2×2) and Bluetooth 5.0.

As it’s a HP laptop, there’s no surprises when it comes to software. You get Windows 10 Home as standard, so setting up the PC is rather straightforward. You also get HP apps for technical support, the basic version of McAfee LiveSafe and a one-month free trial of Microsoft 365 for new customers.

The HP Envy 13 range comes in at three price points in the UK. The base i5 model retails for £850, the mid-level i7 (the model we tested) costs £1,000, whilst the top-spec i7 with the dedicated GPU clocks in at a price of £1,150. You can currently purchase all three models from the HP UK online store and select models from John Lewis.

In the US, you can get the customisable version of the HP Envy 13 (2020) starting from US$1,049 from the US HP store. However, Amazon US is also offering a fixed spec version from as little as $949.

Even the cheapest variant is certainly an investment for users out there. Students should consider opting for the base model – providing they’re mainly looking for a productivity device. If you’re a creator or want a laptop that’s capable of some light gaming, then the mid and top specs are the better choices.

When looking at competitors, the two main ones are Dell’s XPS 13 9300, and Huawei’s MateBook X Pro. Both offer very similar specs to the Envy, but feature bolder designs and higher-res screen options for UK buyers.

However, both are more expensive than HP’s laptop, with Dell’s XPS starting from £1,399/$999, and the MateBook coming in at £1,399 for the base model. If you’re based in the US, you’ll only be able to get the MateBook via importing.

If you desperately want a 4K screen, then HP has confirmed that the 11th gen version of the HP Envy 13 is on the way and it should feature this display upgrade in the UK – along with Thunderbolt 4.

It’s also worth noting that HP is currently offering this device as part of its Laptops for Schools initiative, which means that with a purchase of the device, HP will donate £200 to a school of the buyer’s choice to put towards PC equipment.

You can take a look at how other rivals compare in our list of the best laptops.

HP is clearly going for the ‘if it ain’t broke, don’t fix it’ approach with the HP Envy 13. The design is in-keeping with both the 2018 and 2019 variants of the laptop, with the biggest changes being made to the display and keyboard set-up.

It’s not completely perfect. The fan is on the noisy side, the screen is prone to glare, and it’s a shame there’s no option for a 4K panel in the UK.

Nonetheless, in comparison to similarly specced rivals the price is extremely competitive, and the downsides don’t take away from the fact that this device strikes the right balance between being portable and powerful.