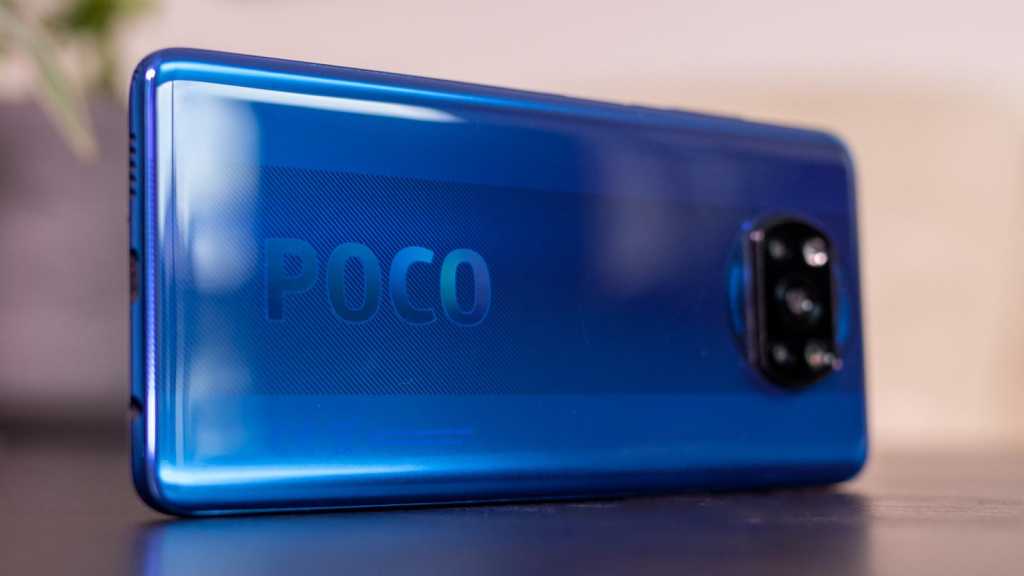 The Poco X3 packs in strong specs, an excellent camera, a beautiful display, and absolutely fantastic battery life. Getting all of that for just £199 makes the Poco X3 a shoo-in for the best budget phone of 2020.

Budget phones come with compromises – that’s inevitable. What matters is picking the right compromises, and with the Poco X3 Xiaomi has done exactly that.

By dropping 5G and building a little extra bulk onto the frame, Xiaomi has managed to squeeze strong specs, a 120Hz display, a solid camera, stereo speakers and an absolutely enormous battery into the Poco X3 while still somehow keeping the starting price below £200.

I’m really not sure how Xiaomi is making money selling these things, and frankly I don’t want to know.

Alright, let’s get the bad out of the way early. The Poco X3 – or Poco X3 NFC to give the phone its clunky full name – isn’t an ugly phone, but it isn’t exactly a looker.

Available in blue or grey, the first thing you’ll notice either way is the giant ‘POCO’ logo printed across the phone’s rear. It’s inlaid in a striking finish that catch’s the light in rainbow patterns, but this really only serves to draw more attention to a logo I simply wish wasn’t there. I don’t know why some phone brands have started plastering text across device’s rears, but I really want them to stop.

The rest of the rear is decorated with a grid of diagonal lines leading up to the unusually shaped camera module. I’ll admit that I don’t love how it looks, but it is at least something a little different. The Poco X3 looks like nothing else on the market, and there is something to be said for that, even if it isn’t to my taste.

The back is understandably finished in plastic, but the phone’s frame is aluminium and the big 6.67in screen is encased in Gorilla Glass 5. That large display makes the whole phone tall, but more than that it’s thick (9.4mm) and heavy (215g). That’s a tradeoff for the battery, among other features, but either way you can’t avoid the fact that this is a big, heavy phone.

An IP53 rating guarantees decent dust-resistance and some waterproofing – a rarity in a phone at this price, especially with a headphone jack in there too. Staying on audio, stereo speakers are another unexpected find in the budget space – I just reviewed a £700 phone that didn’t include stereo sound, so finding it on a £200 device is a welcome surprise.

Finally, along with the volume rocker you’ll find a recessed power button with a built-in fingerprint scanner on the right-hand side. This is another minor irritation – it too easily registers failed fingerprint attempts when you grab the phone the wrong way, and on the flipside frequently didn’t recognise my fingerprint when I did want to open the phone.

OK, so the Poco X3 is a mixed bag on build. But that’s only half of how a phone looks, and Xiaomi has absolutely nailed the other half.

Colours are bright and punchy, and the high refresh rate panel is an absolute steal at this price point – it’s hard to go back to a regular phone once you’ve tried one. Because it’s LCD the viewing angles and contrast suffer a little, but you won’t find an OLED anywhere else at this price, and certainly not at 120Hz.

The bezels are a touch chunky, especially below the screen, with an overall screen-to-body ratio of 84.6%. You’ll stop noticing this quickly enough though, and the central punch-hole selfie camera is small enough that it doesn’t detract either.

I’ll put it simply: right now this is the best phone screen you will find anywhere near this price point.

When it comes to the Poco X3’s internals, Xiaomi has made an interesting decision. It’s adopted Qualcomm’s new Snapdragon 732G chipset, one of the few new chips for 2020 that doesn’t support 5G connections.

That is, in a sense, an obvious downside: if you want 5G it just isn’t here. But 5G isn’t that great yet, and accessibility is limited in many countries and cities, so why pay extra for it if you’re unlikely to see the benefit?

By making the choice to ditch 5G Xiaomi is instead able to deliver stronger performance for the price. Paired with 6GB of RAM, the Poco X3 runs smoothly in almost everything you throw at it. It even just about keeps up with phones like the OnePlus Nord running the more expensive 765G processor in our benchmarks, and beating the Pixel 4a, which uses the slightly slower (but also non-5G) Snapdragon 730G.

If that all sounds like a mess of specs and jargon, then the long and short of it is this: the Poco X3 punches above its weight in raw processing power, making it a great choice for gamers on a budget or simply anyone trying to buy a phone that won’t slow to a crawl two years from now.

It comes with a choice of 64GB or 128GB storage. Normally I’d say that you should opt for the extra storage, but since the X3 also has a Micro SD slot you’re better off saving money with the 64GB model and buying the cheaper expandable storage – though note that this will fill the second SIM card slot, so dual-SIM users should grab the 128GB version.

In terms of networking you obviously don’t get 5G, but there is Bluetooth 5.1, an IR blaster, and – in case the name didn’t give it away – NFC support for contactless payments.

Xiaomi has fit a quad camera setup onto the back of the Poco X3, though the main lens is the clear star of the show.

This 64Mp, f/1.9 camera is an unexpectedly capable shooter for a phone of this price, delivering decent detail and vibrant colour. I won’t pretend that you can’t tell the difference between this camera and that of a flagship, but honestly the quality gap – in good lighting at least – is small enough that you likely won’t care.

Lowlight performance is definitely where the hardware shows its limits, and in dark settings detail and colour range drop dramatically. A decent night mode helps matters though, delivering genuinely excellent colour and dynamic range in night-time shots, though at the cost of introducing a fair amount of noise.

A 13Mp, f/2.2 ultrawide backs the main lens up, and while it’s less impressive it’s certainly still decent. It helps that Xiaomi has nailed the colour tuning here to deliver consistent results between the two lenses. The other two lenses are 2Mp a piece, with a depth sensor to help with portrait mode and a macro lens that, like the macros in most cheap phones, is best ignored entirely.

On the front you’ll find a 20Mp, f/2.2 selfie camera which also delivers much better results than most competitors at the same price. Despite only having a single lens it also offers portrait mode shots at similar quality to the rear cameras – both had a tendency to blur parts of my hair, but that’s really nitpicking.

As for video, the rear cameras can shoot HD at 60fps or 4K at 30fps, while the front camera is limited to HD at 30. There’s no OIS, but the electronic image stabilisation does a decent job at keeping video steady if you need it to.

Ultimately, the camera is another microcosm of the phone as a whole: undeniably imperfect, but for the most part better than it has any right to be for this price.

Remember how I said the Poco X3 is a bulky boi? Well, here’s the main reason why: it’s packing a giant 5160mAh battery – which jumps up to a silly 6000mAh in the Indian release, which ditches NFC instead.

Even with ‘just’ 5160mAh the Poco X3 makes it through two days of use with juice to spare, so even if the battery life degrades over time it’s likely that this will always be capable of lasting a full day and then some. In our battery life benchmark it delivered the best result we’ve seen from any phone in months, which doesn’t surprise me at all from my experience using the phone for a couple of weeks.

Unsurprisingly you don’t get wireless charging at this price, but the 33W wired charging topped up 59% in just 30 minutes, which is comfortably more than a day’s usage.

Let’s come full circle. After starting on the Poco X3’s one hardware flaw – its design – let’s end with its second issue: the software.

I’ll preface this with the disclaimer that more than any other part of the phone, software really comes down to taste, but I’m really not a fan of MIUI, Xiaomi’s Android skin.

It’s certainly not the worst offender in this space, but MIUI 12 – which runs on top of Android 10 – is far from my preferred Android experience. For one, it skews much closer to iOS in core design, with touches like swiping down on one side of the screen for notifications and the other for the control centre shortcuts clearly cribbed from Apple’s notes.

If you’re coming from an iPhone this might well lessen the learning curve, but other Android users will find the design confusing. I suspect anyone will find the settings menu obtuse, while there’s no defence for the sheer amount of bloatware – a mix of games, social networks, and Xiaomi’s own apps. These are at least almost all uninstallable, though there are a few hangers-on.

I may find MIUI 12 clunky, but it is at least stable and smooth, so once you get the hang of its oddities there’s probably not too much to complain about really.

The Xiaomi Poco X3 NFC starts from a mere £199 in the UK, which gets you 64GB of storage. The version with 128GB storage is £249, but since you can buy a microSD card for less than that, it probably makes sense to stick with the 64GB model.

You can buy either model direct from Xiaomi, or from Amazon, but check out our guide to the best Poco X3 deals to see if you could save any money.

The pricing puts the Poco X3 up against a variety of other great budget devices. The Realme 6 offers mostly similar specs – albeit with only a 90Hz refresh rate – from £219, and Xiaomi’s own Redmi Note 9S is the same price at £199 but has now fallen a bit behind on specs.

Check out the rest of our best budget phone chart for our other recommended phones around the same price.

The Poco X3 isn’t perfect. The big battery makes it bulky, I don’t love the aesthetic, and to my taste MIUI 12 leaves much to be desired.

For the most part these are small complaints though, especially when stacked up against the X3’s myriad strengths: strong specs, an excellent camera, a beautiful display, and absolutely fantastic battery life.

The fact that you can get all of that for just £199 is almost unbelievable, and makes the Poco X3 a shoo-in for the best budget phone of 2020.