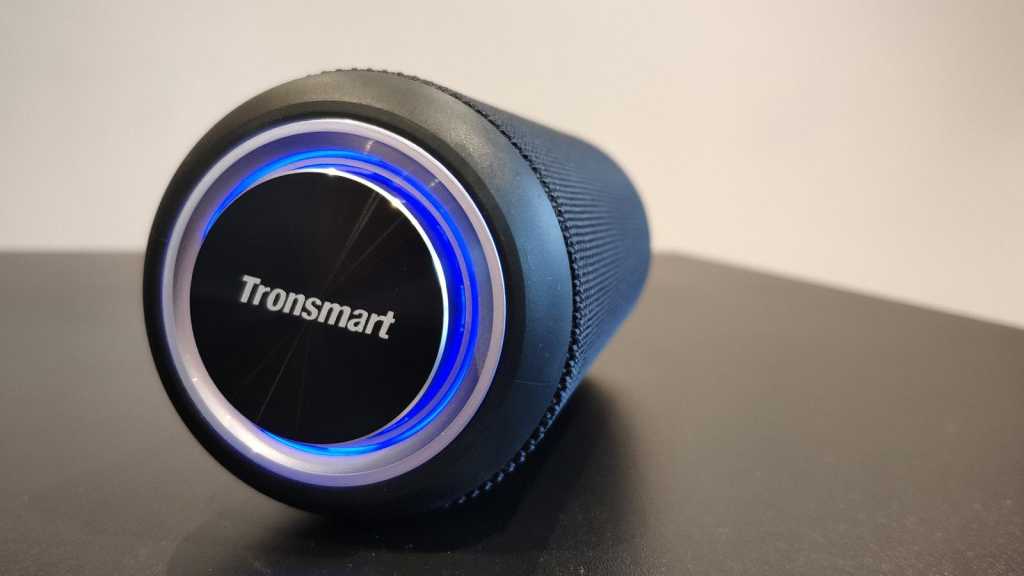 An excellent budget Bluetooth speaker that impresses on sound quality and connectivity.

As a sub-£100 Bluetooth speaker Tronsmart’s T6 Plus was already a decent offering, but a handful of tweaks make this upgraded version seriously worth your consideration.

It’s a simple trick, but one that significantly improves the audio performance: Tronsmart has taken one of the two 20W drivers inside the T6 Plus and repositioned it at the rear. With speakers now facing front and back, this upgraded version is much more capable of providing 360-degree audio, filling the room with sound.

The company has also added NFC, which makes pairing it with a smartphone as simple as tapping your phone on the front of the speaker. It will still pair over Bluetooth 5.0, but it’s a quicker and less fiddly solution than first navigating to your Bluetooth menu and then searching for and connecting to the T6 Plus.

The design has had a refresh, too, and this Bluetooth speaker is now fully cylindrical with buttons that are less springy and have a more tactile response. It does give it a somewhat less appealing side effect of continuously rolling along when you place it on its side on a flat surface, however.

This is not a smart speaker in that it does not have a voice assistant built-in, but one of its many ‘smarts’ is its ability to access the voice assistant on your smartphone. We were able to access Google Assistant by pressing and holding the volume button down for a couple of seconds. 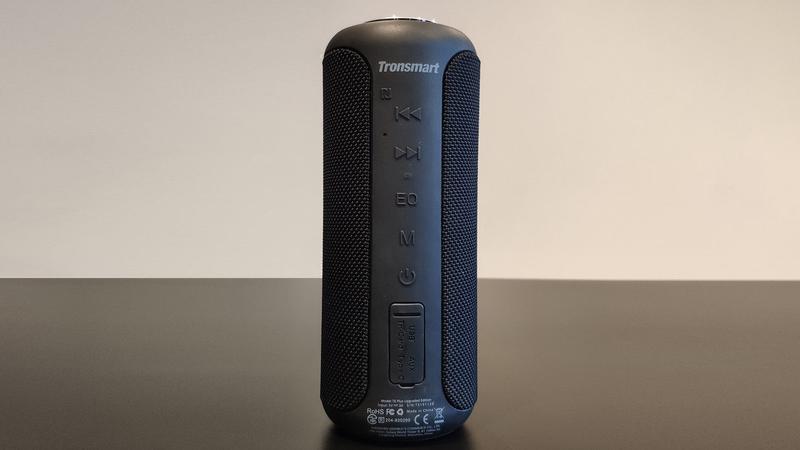 We tested the black version of the Tronsmart T6 Plus, but it’s also available and looks great in a two-tone black and red.

The Tronsmart is waterproof, rated IPX6, which means it is rainproof and splashproof rather than fully submergible. As such it has a rugged rather than elegant design, and feels built to last.

Here you’ll find: a Tronsmart logo; an NFC badge; skip back/rewind and skip forward/fast-forward buttons; a microphone; an EQ button for switching between the three audio modes; an M button for factory resetting the speaker, switching connections or unpairing devices; a power button; a rather ugly rubber flap that protects USB-A, USC-C, microSD and AUX ports from water ingress; and the necesssary but ugly blurb that covers power specifications, quality assurances and so forth.

Volume controls are found at the top, with an aluminium clickwheel that offers a satisfying click as you move up or down through each volume levels, maxing out with an audible beep. 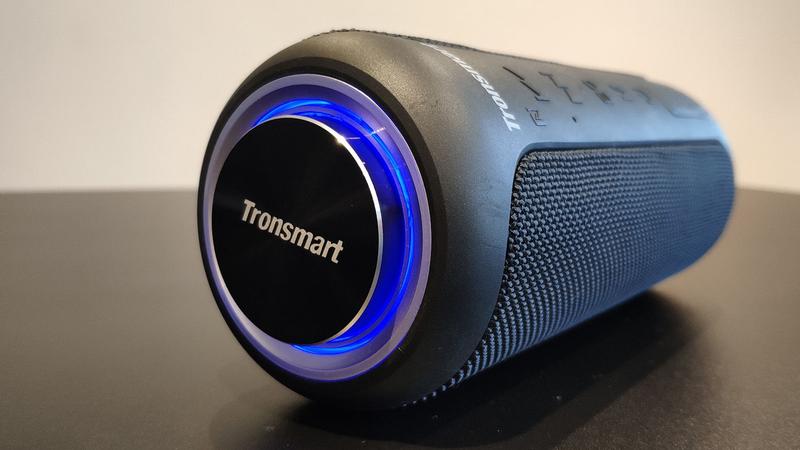 It’s from under this clickwheel that a LED glows blue to denote Bluetooth pairing, while the wheel itself is also used as a button for playing and pausing music, answering, ending, redialing and rejecting phone calls, or for activating the voice assistant on the paired device.

All that might sound complicated, but the T6 Plus is actually very intuitive to set up and use. The changes to the design in this upgraded model also seem mostly positive, and we can live with its desire to roll around a flat surface.

For a portable speaker it’s worth mentioning the Tronsmart’s size and weight: it is something of a beast at 750g and 210x84x84mm. 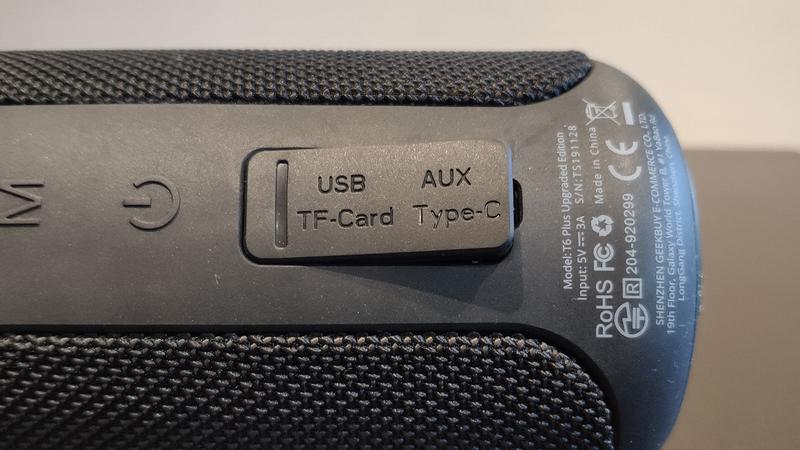 This is understandable when you consider there is a 6600mAh battery inside, actually two 3300mAh cells. And necessarily so: the T6 Plus can offer up to 15 hours audio playback (at 50% volume), and also functions as a power bank – albeit a slow one, delivering a charge to connected devices at just 5W, but it’s useful in emergencies. We’d be more impressed were it easier to tell how much power the speaker had left.

The USB-A port tucked away under the rubber flap has a secondary purpose, too, allowing you to connect a USB flash drive (up to 32GB) and play music stored on it. Combined with microSD support up to 32GB and Bluetooth streaming, getting your music to play on the speaker is simple. 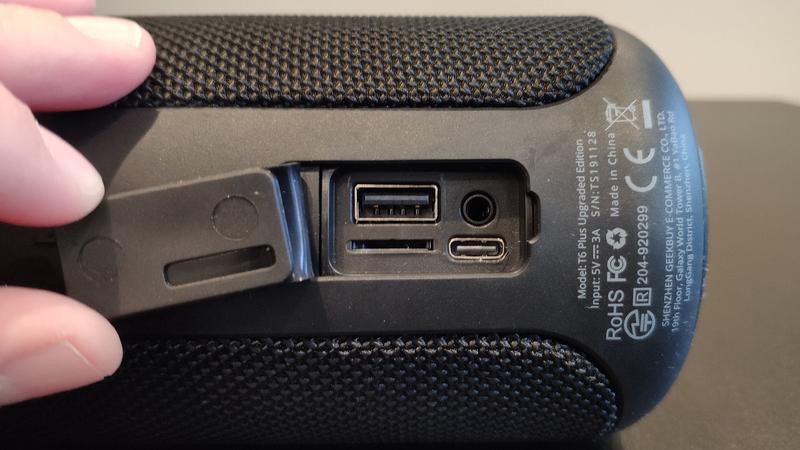 This T6 Plus speaker has Tronsmart’s own SoundPulse algorithm built-in. Portable speakers aren’t typically able to match fixed speakers on audio quality because they don’t have the same power output, but Tronsmart uses customised car-grade power cells to amplify the power supply to the speaker by a factor of five. Its SoundPulse algorithm then cleverly distributes this power, separately processing the different parts of the audio spectrum.

…Or at least that’s what the marketing blurb says.

In our own tests, we found the T6 Plus incredibly loud – at 50% it delivers 65dB. Even at max volume there is no hint of distortion or reduction in audio quality, though battery life will naturally deteriorate faster. Buy a second T6 Plus and you can connect the two as a stereo pair.

The new positioning front and rear of the two 20W speakers allows the Tronsmart to more consistently fire audio around the room, resulting in a rich audio experience no matter where you sit.

There are three sound modes – Balanced, 3D, and Deep Bass – and you actually can tell the difference between them, making some of our favourite tracks emminently more enjoyable. Bass is much punchier than we had expected, and the T6 Plus is also very capable when delivering warm and clear vocals.

Audio streaming is possible over Bluetooth 5.0, with the T6 Plus able to maintain the connection at up to 66ft distance. 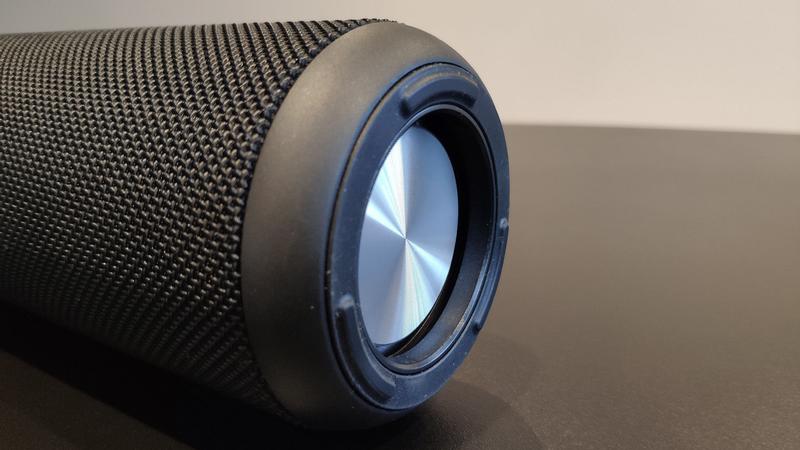 Where to buy Tronsmart T6 Plus Upgraded Edition

Official stockists of the Tronsmart T6 Plus include Amazon, Geekbuying and AliExpress.

The original T6 Plus remains on sale, so double-check before buying that you are buying the Upgraded Edition.

Amazon is currently the cheapest option, with a discount reducing the price to £53.54.

A carry case is available, but is not supplied with the T6 Plus unless you buy from AliExpress and select this option. 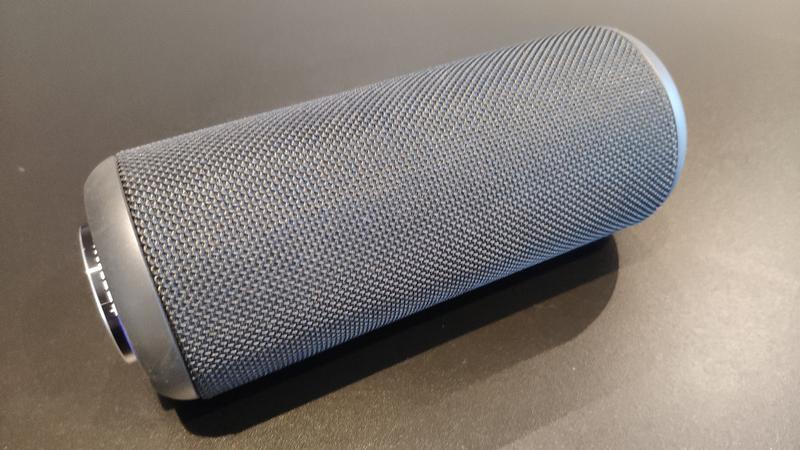 Tronsmart’s T6 Plus (Upgraded Edition) is one of the smartest non-smart budget Bluetooth speakers we’ve tested. Not only is this rugged waterproof speaker capable of pumping out room-filling, 360-degree audio from its two 20W drivers, it can also function as a 6600mAh power bank for emergency recharging of your phone or other USB device, and let you connect to your phone’s voice assistant with a tap of its clickwheel.

For the money sound quality is outstanding, benefiting from Tronsmart’s own SoundPulse algorithm and a dual-passive radiator to deliver balanced and clearly defined audio, with no sign of distortion. And getting audio to the speaker couldn’t be easier, with support for microSD, USB flash drives and Bluetooth streaming.

This upgraded model adds NFC connectivity, taking all the hassle out of pairing your smartphone. Battery life is also decent, offering up to 15 hours playback at 50% volume.

Buy two and you can take advantage of wireless stereo pairing.