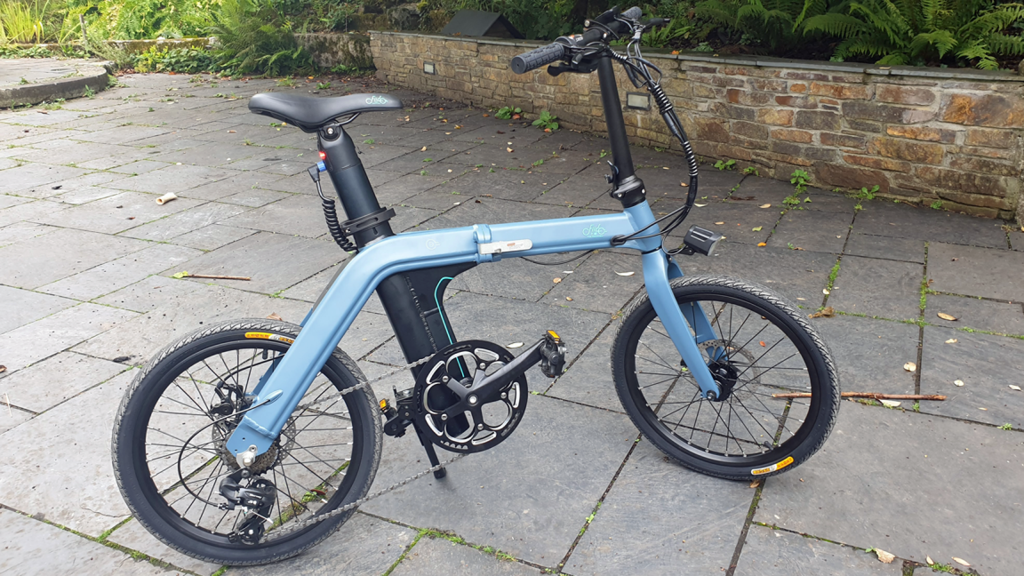 If you want a foldable bike for commuting from the train station to the office, or simply prefer to pop around town without having to expend too much energy, then the Fiido D11 is an excellent option. Should your adventures take you into more rugged terrain, then it can lose its appeal rather rapidly. Stick to the roads and you’ll be very happy.

Fiido might sound like a dog from the 1970s, but these days it’s a name that’s quickly becoming associated with electric bikes. We’ve already reviewed the Fiido M1 off-roader, but the Chinese company’s latest foldable bike has a laser focus on urban environments. We take it for a spin to see if it can be man’s (or woman’s) best friend.

The Fiido D11 arrives in a large rectangular box that makes you think three things: there’s going to be some assembly required, it’s unlikely to have large wheels, and that it should be quite light.

In fact, assembly is minimal, requiring just the unfolding of the frame, securing the clasp on the cross beam to hold it all firmly in place, then doing the same for the handlebar column. The only need for the included tools is to attach the pedals. The final part of the process is to slide the saddle column into its slot and fasten it in place with the quick-release clip.

The seat post hides a nifty feature: it’s also home to the rechargeable battery that powers the Xiongda brand 36V, 250W motor. Just below the saddle itself are the charging port, power button and rear light, plus the cable that connects the battery.

It’s a shame the cable and manual connection are needed: it’s not the neatest solution, but it’s a novel approach.

It’s the first electric bike we know of to take this approach, and in many ways it’s a neat solution, especially as it’s quick to remove so you can charge it or store in indoors.

On the flip side, there’s no locking mechanism, so you can’t really leave it in place if you have to leave your Fiido D11 locked up in a bike rack somewhere public: it’s far too tempting and easy to steal. It’s another good reason why you should definitely have electric bike insurance.

With everything set up, the Fiido D11 is a good- if slightly odd-looking machine. With no chainstays, you’d think it would flex and wobble, but it’s surprisingly rigid overall.

The slate blue and black colour scheme gives it a smart and understated aesthetic. Some of the welding spoils the appearance though, due to its rather industrial look. As well as the rear light, there’s also a front one, but no mudguards to keep your office wear pristine.

My first impressions when the box arrived were also proven correct, as the bike is fitted with two 20in wheels and isn’t too heavy. Fiido claims that it weighs a feathery 12.9kg, but that’s without the battery and – clearly – quite a few other essential bits and pieces. In reality, it weighs about 18.5kg.

Folding the bike back down again is only a matter of releasing a couple of clamps, which can be done in seconds. So, getting it in and out of the car will be a doddle. When collapsed, it measures 80cm x 74cm x 40cm, compared to the 148cm x 110 cm x 40cm when ready to ride.

One thing it does lack is a way to secure the folded frame together or any kind of carrying handle. But keeping a bungie in your bag will solve the former, while holding it by the cross-beam seems stable enough for short trips.

There’s quite a lot of scope in how high the saddle can be set (min and max markings help you stay within the limits), making it ideal for our family to share. My wife, daughters and myself come in various shapes and sizes, but we were able to find comfortable heights whether it ranged from a 5ft 9in chap weighing in around 12 stone or a 5ft 1 lady who won’t tell me how much the scales reveal (but it’s a lot less than when I stand on them).

You can adjust the tilt on the handlebars via a clasp that loosens to allow you to spin it back and forth, this also helps adjust the angle of the electronic display that tells you your speed and the current level of battery charge. It’s the same as found on the M1, showing four bars rather than a percentage. Speed is measured in km/h and I couldn’t find an obvious way to change it to MPH, the unit used in the UK and US. That’s largely because no manual was supplied.

There’s also a button for toggling between the three different levels of assistance on offer from the motor.

Next to the right handle-grip are two levers for changing gears up or down. They’re not easy to see and throughout my time with the Fiido D11 I did find that I pressed the wrong one on several occasions, selecting an inappropriate gear and causing frantic adjustments to get back in a rhythm. You can see which gear is selected via a small, mechanical panel just above the grip, so there was no hiding from my mistakes.

There’s also a thumb-lever above the right grip, which you depress to kick in the motor. It’s well placed and easy to use, which is something I was very grateful for when trying to make it up the large hills that dominate the part of Cornwall in which I live.

The brake levers operate mechanical disc brakes on the front and back wheels, both of which proved to be very sharp at bringing the bike to a halt. A light touch is definitely advised.

A seven-speed Shimano Tourney gear system is in place on the rear wheel, offering a ratio of 52:12 which gives you enough options to ease down flat streets or attempt those hill climbs.

You won’t want to try too much off-roading though, as the slim 1.75in CTS tires are for asphalt rather than muddy tracks, plus the lack of any suspension will give you a sore bottom before long. The odd gravel path should be navigable, but the D11 is aimed squarely at commuters.

The Fiido D11 is a comfortable ride when on smoother surfaces. The saddle didn’t feel like it was trying to carve new crevices into my body, unlike some other bikes I’ve tried, and the seated position is one that could certainly suit an afternoon’s leisurely cycling or a commute from the train station to the office.

While on the roads, the ride was pleasant enough, with a few rattles here and there. As with any new bike, there will be a riding in period where the mechanics settle, so if you do purchase a D11 then be prepared to give it a quick check and tighten-up after a week or two’s riding.

Riding up a modest hill provided the chance to test the motor’s torque, with very pleasing results. As a cadence sensor is used, there is a small jolt when the motor kicks in, but ultimately it was welcome as I could feel the burden being taken over by the bike. To see what the D11 was really made of, I made my way to a more challenging slope, one that’s hard to even walk up.

In the lower assistance mode, there didn’t feel like much advantage to using the motor but switching up to full power came as blessed relief. With the motor’s full power, I was able to make short work of the ascent, while keeping my efforts to a more civilised level.

The throttle is a real advantage when pulling away from a stop on a hill, taking a lot of the effort away from your legs. Fiido claims that the D11’s battery will last up to 100km (60 miles) but this will depend upon the assistance level you use, the terrain and even temperature.

Using the D11 on flatter routes obviously proved less challenging for the battery, but again we’d prefer a more accurate display of battery charge before being totally confident of taking it on long rides. Recharging from empty takes around seven hours, but you do get the option to simply remove the saddle column and plug it into the included charger, rather than needing the whole bike.

A downside came in the form of the brakes. There’s no problem with their stopping power, but after only a very short while they became very noisy, squeaking and hollering when applied on steeper declines. There was also the feeling that the slim, compact wheels and lack of suspension made the ride a bit uncomfortable and unsteady once I hit the rugged tracks that led to home. This is fair enough though, because the foldable nature of the D11, along with its design, means that its primary habitat is sure to cities and towns, where I feel it would absolutely excel.

The Fiido D11 isn’t yet available locally in the UK or US, but you can order one from Geekbuying which, at the time of writing, will cost you £1045.67 when dispatched from its European warehouse. This means you don’t have to worry about import charges or long delivery times from China, as Geekbuying has already incorporated those factors, alongside VAT, into the price.

The recommended price in the US is $1299 and again it can be purchased from Geekbuying.

Of course, if you want to see what’s on offer from other manufacturers, check out our guide to the best electric bikes.

There’s no shortage of folding electric bikes designed for commuters. The Fiido D11 doesn’t take the crown for being the best, but it has a lot going for it: a very light weight, a low price, seven gears and the easily removable battery.

There’s an argument – if you live in the UK – to spend a little more and get the MiRider One as you’ll get a UK warranty and local support. But if that doesn’t bother you and you prefer the D11’s advantages, it’s a sensible choice.