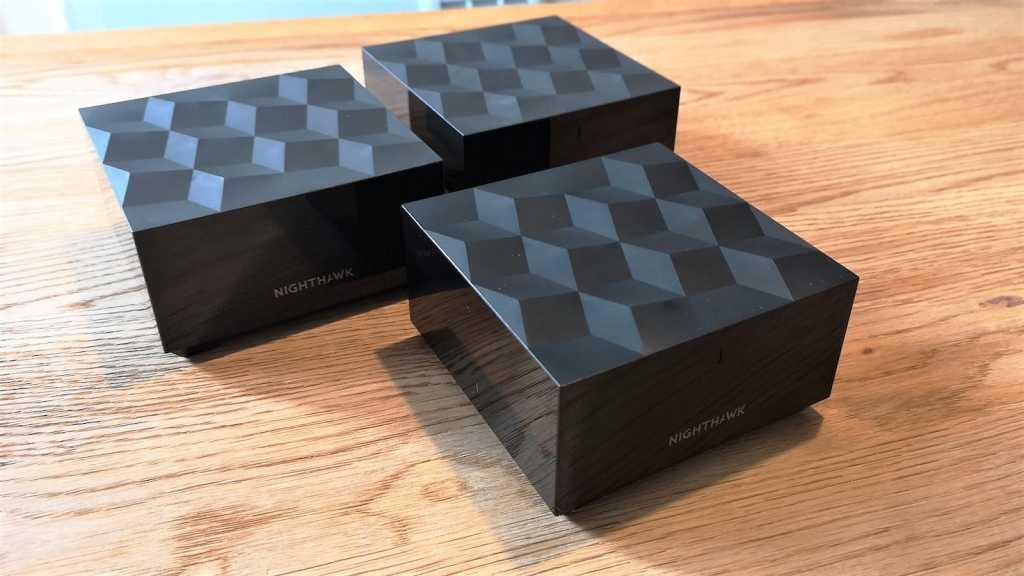 The Nighthawk Mesh WiFi 6 System is the cheapest Wi-Fi 6 ready system going so far, is simple to set up and use, and its reach can be expanded easily, by adding more satellites.

WiFi 6 (aka 802.11ax) is the latest WiFi standard, promising much faster speeds, lower latency, as well as stronger, less-congested signals than the previous generation, Wi-Fi 5 (aka 802.11ac).

With more and more phones, like the  One Plus 8 Pro and  Samsung Galaxy S10, and more and more laptops like the  Microsoft Surface Pro 7 and the  Dell XPS 13 (2020) featuring Wi-Fi 6-compliant radios, there’s never been a better time to invest in a Wi-Fi 6 router or mesh system for your home.

The problem is, mesh networks that are Wi-Fi 6-ready have been expensive – look at the prices for the latest Orbi (RBK850), for example. With the Nighthawk Mesh WiFi 6 System, Netgear promises to make next-gen home networking affordable for us mere mortals.

The Netgear AX1800 Nighthawk Whole Home Mesh WiFi 6 System MK60 – to give this product its full name – is the cheapest WiFi 6 mesh system we’ve seen to date, and directly competes with Amazon’s  Eero mesh Wi-Fi system in terms of price and ease-of-use. It also represents an alternative to the aforementioned Netgear Orbi devices, and other mesh Wi-Fi offerings, like the  Google Nest WiFi and the  TP-Link Deco P9.

The Nighthawk Mesh WiFi 6 System units are sturdy-looking reflective black mesas with snazzy angular undulating designs on the top. The look and colour scheme is consistent with Netgear’s gaming-centric brand of routers, though there are no large posable antennas jutting out at the sides – all of the radios are neatly tucked away and hidden inside the 122 x 122 x 64mm plastic bodies.

I tested out a three-unit pack for this review; one router and two satellites. They’re virtually identical in appearance and specifications, the one key difference being that the MR60 router has two gigabit Ethernet ports – one to connect to your modem, and the other to connect to other devices.

That doesn’t give you much in the way of flexibility for wired connections – even the Eero gives you two Ethernet ports per device. They’re not as small as the Eero units either, which measure a dinky 60 x 98 x 98mm. The lack of ports means that you’ll likely want to invest in a network switch, especially if you have lots of devices with Ethernet ports in your living room.

Weighing around 287g each, the Mesh WiFi 6 units are lightweight as well. It’s easy to shunt them around on shelves, desktops, window sills, wherever you need to position them in the home.

The Mesh WiFi 6 System is a dual-band system 2.4GHz and 5GHz. There is no wireless backhaul like there is on Netgear Orbi systems, which makes for a more reliable whole-home network, but what you can do is run an Ethernet cable from the router to the satellites to create wired backhaul. This is recommended if one of the satellites is just out of range of the router’s Wi-Fi signal.

You’ll need to download the Nighthawk app (iOS, Android app) for set up. Connect the MR60 router to the modem, and then follow the on-screen prompts. Once the router’s up and running and you’ve changed the SSID, network and the admin passwords, you’ll then need to set up your satellite(s).

These should work out of the box as they’ve been pre-paired, but if there are any problems, you can pair the devices with the touch of the Sync button on the rear.

When everything is connected and up and running, the Nighthawk app gives you an overview of your network map. Tapping on each device in your network lets you see which devices are connected, see at a glance how much bandwidth each device is eating up, and disconnect any devices, should you wish to manually enforce some homework time. You can name the router and satellites, to make it easier to see what devices are connected in which rooms.

From the mobile app, you can also perform speed tests, and switch from WPA/WPA2, to WPA2, or WPA3, if any of your devices support that. Netgear Armor, Bitdefender-powered security software, also actively scans your system for threats and prompts you to do things like change passwords, and create Guest WiFi networks, instead of sharing security details with visiting friends.

The Nighthawk app is fairly rudimentary, however. If you want to dig deep and enable things like QoS bandwidth distribution, port forwarding, or change the wireless channels, you’ll need to use the desktop admin console.

I tested out the Netgear Nighthawk Mesh WiFi 6 System in a three-bedroom terraced house in south London, setting up the router in the living room, one satellite in the kitchen – one room away from the router – and another in the back office, one floor up and two rooms away.

The results below are averages based on multiple link speed tests taken throughout the day, using a phone with an older Wi-Fi 5 radio (a Huawei Mate 10 Pro):

In the case of the first two results with the Nighthawk Mesh WiFi 6, the test client device was connected to the Living Room router’s 5GHz channel. Even with a wall in the way, it’d stick to 5GHz, which accounts for the speed drop. Normally, I’d be bumped down to 2.4GHz, so it was impressive that the Nighthawk Mesh WiFi 6’s aggressive band steering was able to keep us on 5GHz.

Moving upstairs, I was automatically hopped over to the Office satellite, again, hopping on 5GHz. Out in the garden, I was connected to the Kitchen satellite, and again, was able to connect via the 5GHz band.

While that’s pretty impressive, to really see what the Nighthawk Mesh WiFi 6 is capable of, I needed to use a Wi-Fi 6 device, and so I ran the same tests again from the same locations, this time using a RealMe X50 Pro:

If you were in any doubt about the benefits of Wi-Fi 6, these numbers speak for themselves.

Hopping on, or hopping off?

While the great majority of the time I was able to walk between rooms with laptops, or work out in the garden (weather permitting), I found that on the Huawei Mate 10 Pro, that hopping between access points, which should happen almost as soon as you move within range of the strongest signal, would sometimes take an ice age, to the point where it was far quicker to turn WiFi off on that phone, wait a few seconds, turn WiFi back on, and have the phone immediately connect to the access point it should have in the first place.

I didn’t notice this issue with any other device, mind – I also used a 2013 MacBook Pro, a 2015 MacBook Air, an iPhone 8, and a Realme X50 Pro – so it’s likely a bug that’s specific to this Huawei phone. If you encounter something similar, I’d recommend the old fashioned turn it off and on again method.

A Netgear Nighthawk Mesh WiFi 6 system consists of a single router and however many satellite devices you need to increase coverage throughout your home.

For reference, Netgear says that a single device promises roughly 140 square metres (1500 square feet) of wireless coverage, while two will kick this up to 185 sq.m (2000 sq.f), and three devices increases this to approximately 300 sq.m (3250 sq.f). Your mileage, of course, may vary depending on the size and layout of your home.

The basic option is the 2-pack deal (MK62), which sees you getting one router (Netgear MR60) and one satellite (Netgear MS60), which costs £229 directly from Netgear’s UK store. Other merchants including  Scan UK,  Currys PC World and  Amazon UK sell it for the same price, sometimes a little less.

Likewise, readers in the US can buy straight from  Netgear or shop around on  Amazon, for $229.

The more expensive 3-pack deal (MK63) – which is what I tested here – costs either £299 or $300, and includes one router and two satellites. You can pick this up from Netgear’s UK and  US sites, or you can shop around elsewhere.

Few places outside of the official Netgear channels are selling single NS60 satellites (£120/$130) at the time of writing, with the exception of Amazon UK and  Amazon US.

Read our  best mesh Wi-Fi kits and  best routers round-ups for a better idea of where the Netgear Nighthawk Mesh WiFi 6 System sits.

At such a low price, something’s got to give thought, and that’s the absence of wireless backhaul and just one free Ethernet port on each device. Both issues can be mitigated somewhat if you’ve got a network switch and several metres of Ethernet cable you can run about the house, but that solution’s not going to be ideal for everyone.

For a lot of buyers after an inexpensive whole-home solution, the Nighthawk Mesh WiFi 6 is very good value for money and will be an excellent solution.