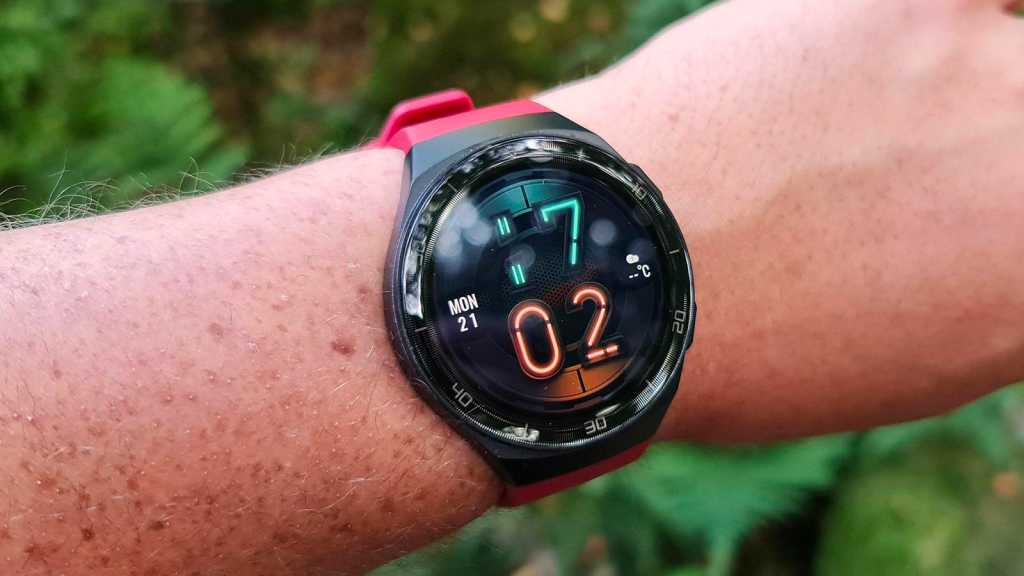 More fitness tracker than smartwatch. The Huawei Watch GT 2e is packed with sensors to quantify your workouts and track your sleep but doesn’t offer a premium enough experience to contend with more full-featured smartwatches.

Launching alongside Huawei’s P40 Series smartphones, the Watch GT 2e is more of a reimagining than a true successor to last years Huawei Watch GT 2 duo.

The GT 2e comes based on the same fundamental internals and feature set as the 46mm GT 2, albeit with a new design and a couple of hardware tweaks that cumulatively render this new smartwatch markedly more affordable than the company’s 2019 efforts.

The biggest departure from the standard Watch GT 2 is the 2e’s design language. Similarly to Samsung’s decision to fork its Gear S2 smartwatch into both modern and traditional forms – with the Gear S2 Classic – the GT 2e is definitely more contemporary in its aesthetic. 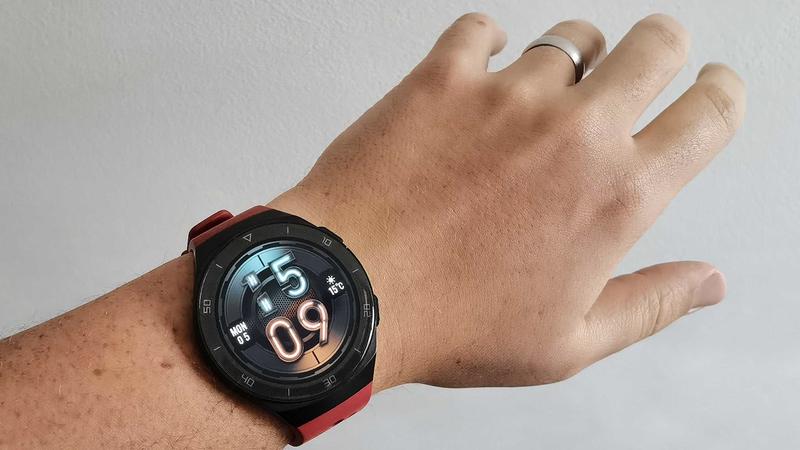 It looks like wearable technology, rather than trying to conceal itself as a more traditional timepiece; so that’s something to bear in mind if you typically avoid sportier-looking watches.

Of the four colourways that the GT 2e is available in, the Graphite Black and Lava Red (pictured) options sport a black stainless steel body, while the Mint Green and Icy White finishes feature a silver casing – all of which are the same size, at 53mm by 46.8mm. 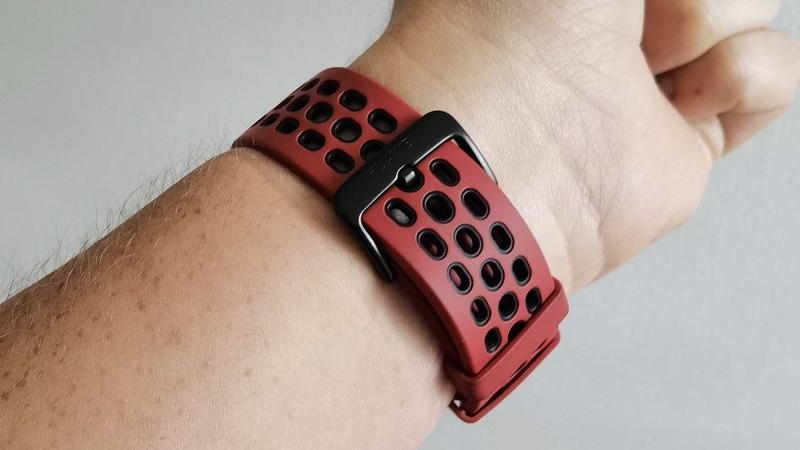 The casing is technically thicker and heavier (43 versus 41 grams) than the 46mm Watch GT 2 but the GT 2e still feels fairly unobtrusive on the wrist and, in testing, caused zero irritation after weeks of wear.

The bands on the GT 2e integrate quick-release pins, so can be chopped and changed as desired, however, their design is such that they follow the geometry of the casing. As a result, while you can technically swap out the bands with any other suitably-sized strap, only official GT 2e bands will marry up with the casing’s contours properly.

It’s also worth noting that the Graphite Black and Icy White options feature a solid fluoroelastomer strap, while the Lava Red and Mint Green variants feature perforated two-tone TPU straps; not dissimilar from Nike’s Sport Bands for the Apple Watch. Extended wear resulted in some staining on the strap, but this can be cleaned off with a little care.

Just two hardware buttons reside on the watch’s right side, while the back plastic plays host to both the ‘Truseen 3.5’ heart rate monitor and the watch’s charging contacts. It’s important to note that the casing is also hardy enough to support swim-proofing up to 5 ATM.

While by default the buttons serve to offer quick access to the GT 2e’s apps and workout menus respectively, most user interaction happens via the watch’s 1.39in circular AMOLED touchscreen. 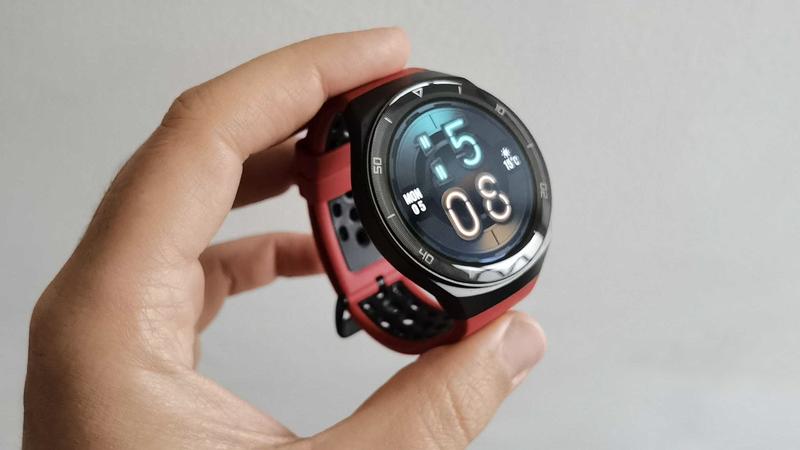 I had reservations about leaning too heavily on a touch interface for workout situations; with physical button-driven interaction being far easier to operate when you’re sweating and jiggling around. That said, the display on the GT 2e is large enough and bright enough (up to 1000nits) to manage basic interactions during a workout, even in bright sunlight.

As well as pleasing contrast – thanks to the use of that OLED display tech – the GT 2e’s screen also doles out rich colours and crisp detail, on par with the likes of the Apple Watch (they both share a pixel density of 326ppi). Touch response is also good, albeit hindered by minor performance lag on occasion.

The GT 2e is a fitness tracker first and foremost but also features a number of smartwatch staples too.

Some functions can operate under standalone conditions, like its inbuilt stopwatch, flashlight and alarms (the GT 2e lacks a speaker, so these are silent, vibration-based alarms), while other features, like notifications, weather and remote camera shutter control, are only possible when connected to your smartphone. 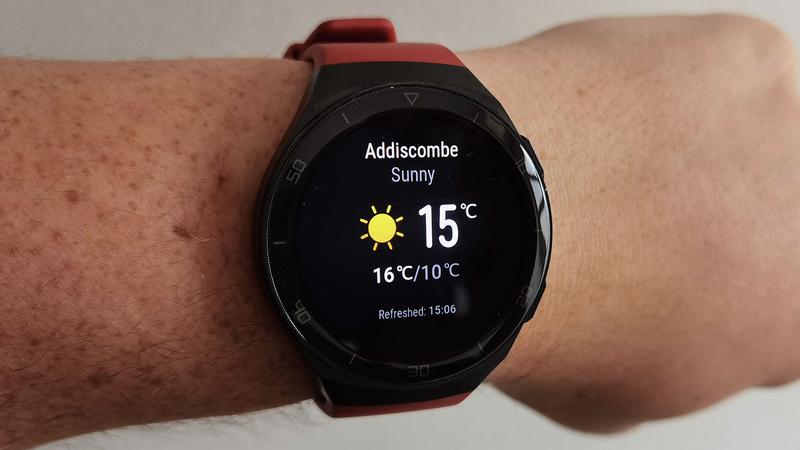 Huawei’s included support for an impressive 100 workout modes; broken down into 15 professional and 85 custom modes. The term “professional” here really means ‘with greater accuracy’ than the other 85, leveraging the full gamut of the GT 2e’s onboard sensors (GPS, heart rate, accelerometer, gyroscope and more) to offer more consistent and precise results.

Supported professional-grade workouts include both indoor and outdoor pursuits, such as running, mountain climbing, hiking, swimming and even triathlons, while across all 100 workout modes the watch can provide insight on aspects like steps taken, active minutes, active heart rate, calories burned and floors climbed.

During a workout (in this example, running) you’re presented with a myriad of information points. So many in fact that they’re spread across multiple screens that the user needs to swipe through if you’re looking for something specific. While most of this data is available to view after the fact, those after real-time insights might find it a hassle to try and scroll through multiple screens while in the middle of their workout. 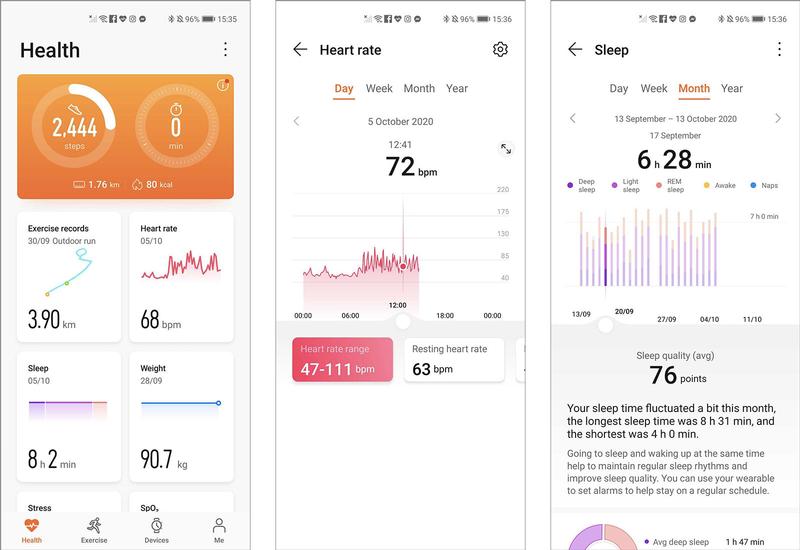 Real-time data includes everything from heart rate to distance, pace, steps, calories, cadence, elevation and even training effect – a score on how much your current exercise should help improve your fitness. My favourite inclusion, however, is the intensity meter, which ranges from basic aerobic, to advanced aerobic, lactic acid, anaerobic, extreme intensity states. This is a great way to better quantify your effort and energy levels and can serve as a useful motivator during particularly challenging sections of a workout session.

The Huawei Health app is how the GT 2e communicates with your smartphone and it’s a fairly easy-to-understand user experience, once you tapped around its various screens a few times. Syncing with the watch is responsive, meaning that I can get back from a run, having left my phone at home, and by the time I’ve unlocked it and loaded the app up, the newest fitness data is available to view within a matter of seconds. 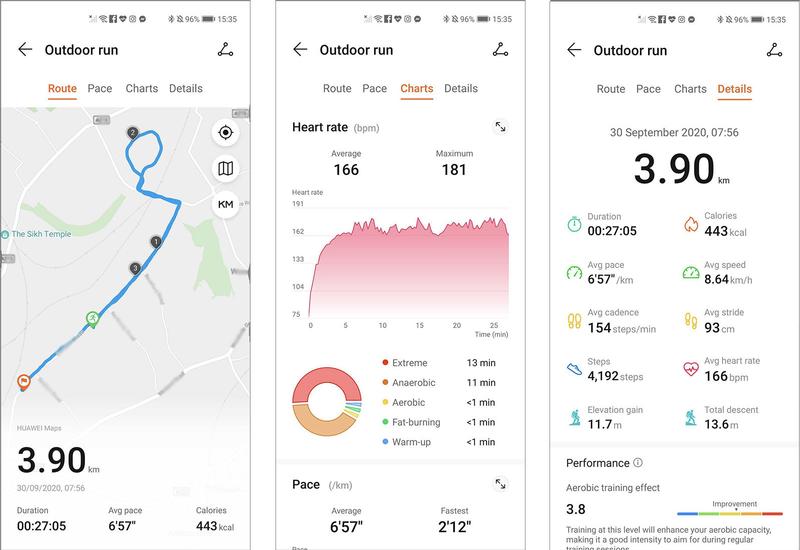 The GT 2e supplements its activity-tracking feature set with wellness features too; namely sleep and stress tracking, as well as inbuilt guided breathing, stand reminders and a few other extras.

The reports automatically generated from sleep data feature a sleep score, as well as suggestions on better sleep practices, with properly cited references for all of the recommendations that inform this portion of the Health app.

As a workout companion, the GT 2e proves pleasingly-reliable, with consistent pace, GPS and heart rate results across repeat workouts.

One of my biggest scepticisms was the watch’s ability to auto-detect certain activities; to the point where three minutes into my run, I had to stop to check whether the feature was actually switched on (it was). Sure enough, I should have just stuck at it, as a further three minutes in, the GT 2e detected that I’d gone for a run and retroactively incorporated the previous few minutes of exercise into its tracking data, so none of my efforts went untracked. 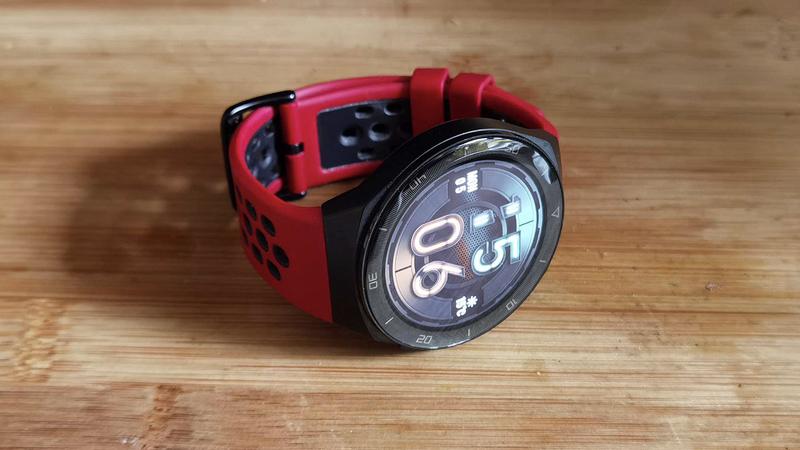 The watch comes pre-loaded with guided workouts (such as running courses) and, generally speaking, these are a great way to add structure to your personal fitness. The watch will vibrate and relay on-screen updates on what to do or how far you’re progressing through a workout, without becoming too intrusive.

Huawei’s Kirin A1 chip can be found in across a myriad of its wearables – not just its smartwatches – and that includes the GT 2e. In this instance, it’s paired with 4GB of storage (for local music playback, if desired) and 16MB of RAM.

While performance is smoother than the likes of Amazfit’s circular-faced fitness trackers, the small amount of memory means fluidity just isn’t on-par with the slickest smartwatches out there, Apple and Samsung’s latest offerings.

The 455mAh battery found inside the GT 2e is unchanged in capacity from the standard GT 2. Huawei promises up to 14-days use per charge but in testing the 2e falls short of the mark. I consistently landed at about 12 days of use between charges, without any fitness tracking on top, which is still respectable but doesn’t quite live up to the promised hype. 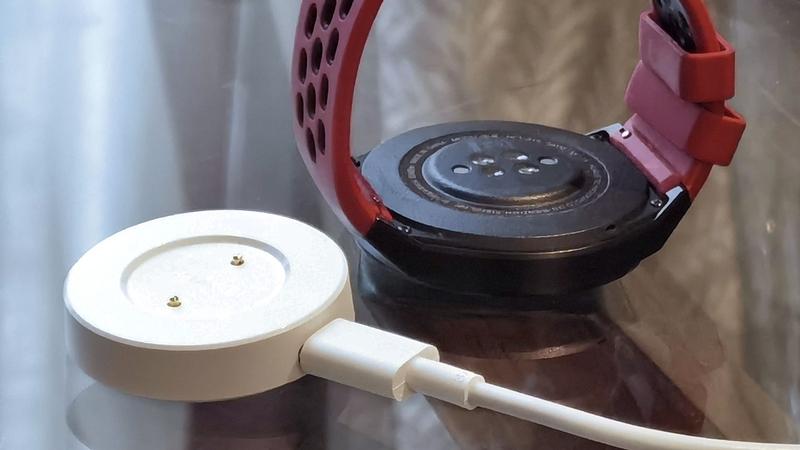 For reference, a 30-minute run with GPS tracking and heart rate monitoring sipped up 5% of the GT 2e’s battery.

As for charging, the GT 2e is thankfully quick, reaching 48% charge in 30 minutes and a full recharge in just over an hour.

The Huawei Watch GT 2e went on sale in April 2020 and is available from Huawei’s own site for £159.99 in the UK. It’s also available from the likes of Amazon UK and Currys for a notable discount.

The Huawei Watch GT 2e delivers on the majority of the promises it makes and serves as a more fitness-focused entry in the company’s GT 2 smartwatch family, especially in terms of design. Its lower price comes as a result of a weaker user experience but its actual fitness capabilities aren’t really impacted all that much.

Huawei Health offers a pleasingly-deep amount of insight for those who enjoy the notion of ‘the quantified self’, which helps elevate the GT 2e above some of the most competitively-priced smartwatch-style fitness trackers out there, namely from the likes of Huami/Amazfit/Zepp.

If you’re not convinced by the line the GT 2e walks, save yourself a little cash and buy a dedicated tracker, like the Fitbit Charge 4, or move in the other direction for a more robust smartwatch experience by jumping up to the whichever of Samsung’s Galaxy Watch or Watch Active entries falls within your budget.