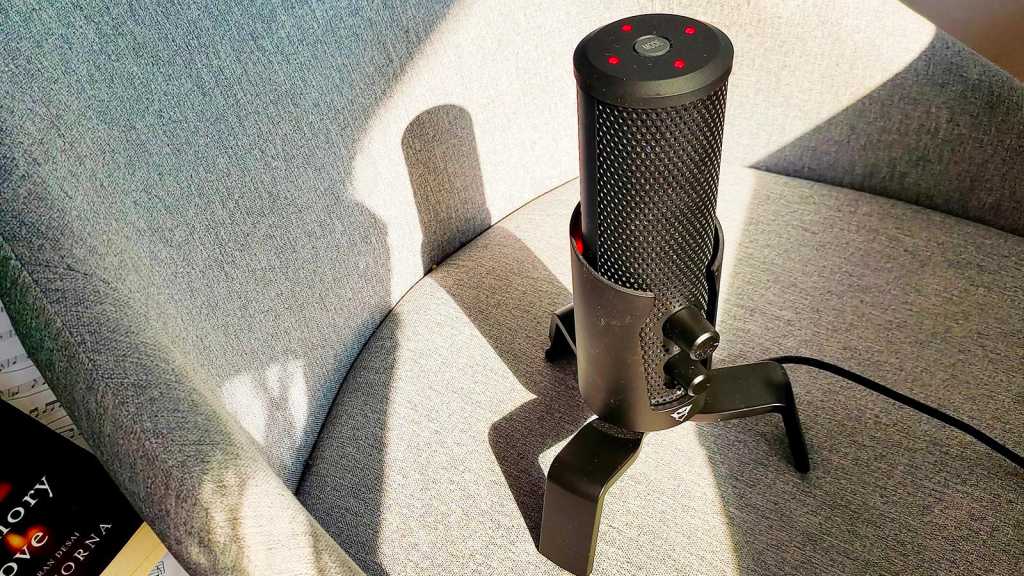 Trust Fyru GXT 258 is a solid, good-looking mic that lights up in a delightful range of colours, but crucially, also delivers clear recording quality in four versatile modes.

The Trust brand name may not immediately spring to mind when thinking of microphones, among the Yeti, Shure or Sennheisers of this world, yet the Dutch company has been manufacturing affordable electronics since 1983.

You might, of course, recognize the brand from its other gaming accessories like the Trust GXT 310 gaming headset.

The Trust Gaming GXT 258 Fyru streaming microphone joins the company’s GXT gaming range as an affordable yet versatile mic for everyday recording. Here’s what we think.

Okay, first impressions: the GXT 258 looks impressive and rugged. The matte black unit screws into a sturdy three-legged tripod base which is sure to keep the mic stable on any desk. The only drawback is it’s heavy at 1.03kg – but the weight certainly helps with the sturdiness.

But even if you’re tight on space, the GXT 258 is a mic you won’t mind showing off on video – especially if you’re an aspiring Twitch streamer – given its quirky backlight. You can easily shuffle through five colour accents using an inconspicuous button on the base (keep in mind, you can’t actually turn the lighting off though).

LED lights at the top also indicate the mic’s recording mode, which you can shuffle through pressing the Mode button. You get four options: cardioid (for one person), bidirectional (for two people), stereo (for instruments and vocals), and omnidirectional (for four people).

The GTX 258 offers a basic set up on the whole. You can plug it in and start using it right away. Though that also means it doesn’t come with additional equalizing software, apps, or buttons to adjust recording levels. You’ll have to do this in post-production if needed.

What you get on the mic itself is a 3.5mm audio out connection and two dials at the front: one to control the recording volume (again, not the levels), and another to control the monitoring volume if you’re listening to yourself live.

As for connectivity, the GTX 258 comes with a 1.8m USB-C to USB 3.0 cable, allowing plenty of room to move the mic around. You can connect it to your PC, laptop or PS4.

Audio recorded on the GTX 258 is crisp. Plus, the zero-latency promised on the box is difficult to question – you can hear yourself back clearly, though most noticeably in stereo mode.

The audio isn’t very loud on initial playback if you look at the sound profile on your recording software, for instance, but it does retain detail. If you’re recording for a podcast, you will need to normalize and perhaps amplify the recording.

In my experience, the cardioid mode on the GTX 258 did a great job isolating my voice. I could only hear the sound of my laptop fan faintly whirring in the background if I turned up the gain to full whack on Audacity but in no way did this damage the vocal recording itself.

The reality is you’ll like need to do a light audio clean up in post-production, but you would need to do that with most microphones anyway, so it really shouldn’t be dealbreaker. Just make sure to keep ambient sounds to a minimum. Another benefit to the GTX 258 is that it comes with built-in pop filters which really do keep plosives at bay.

In terms of the audio quality itself, it sits in the middle to high range, making it ideal for vocals. And though the bass isn’t too booming, the audio is still warm to the ear, with great clarity.

The studio mode, aimed towards musical recordings, can be quite sensitive, so you’re likely to pick up background sounds.

In my tests, the GTX 258 picked up the sound of clanging pots from the kitchen which is a floor above my room, along with the sounds of children playing outside – though admittedly, my window was open. You’ll have to ensure you’re sealed off in silence before you start recording.

Ideally, the mic should be placed in front of you if you’re recording in cardioid mode, but the beauty of a 360-degree mic is that even if you move it to the side it still picks up the sounds with clarity. Just be sure to turn up the recording volume to full using the front dial.

The Trust Gaming GXT 258 Fyru mic costs £119.99 but you can pick it up for  on around £100 Amazon. The price point makes it a great option for burgeoning vloggers and game streamers who want a versatile mic without breaking the bank.

For more, take a look at our selection of the best microphones for streaming and podcasting.

Not only is the GXT 258 Fyru affordable, it also offers an excellent recording quality. Yes, it lacks additional software support which means you might have to do a bit of clean-up in your chosen recording software, but that can be said of most microphones.

The GXT 258 Fyru is also easy to use, making it ideal for anyone stepping into podcasting, game streaming, or music recording for the first time. If you don’t want to spend hundreds on a new mic, the Trust Gaming GXT 258 Fyru is a sure winner.