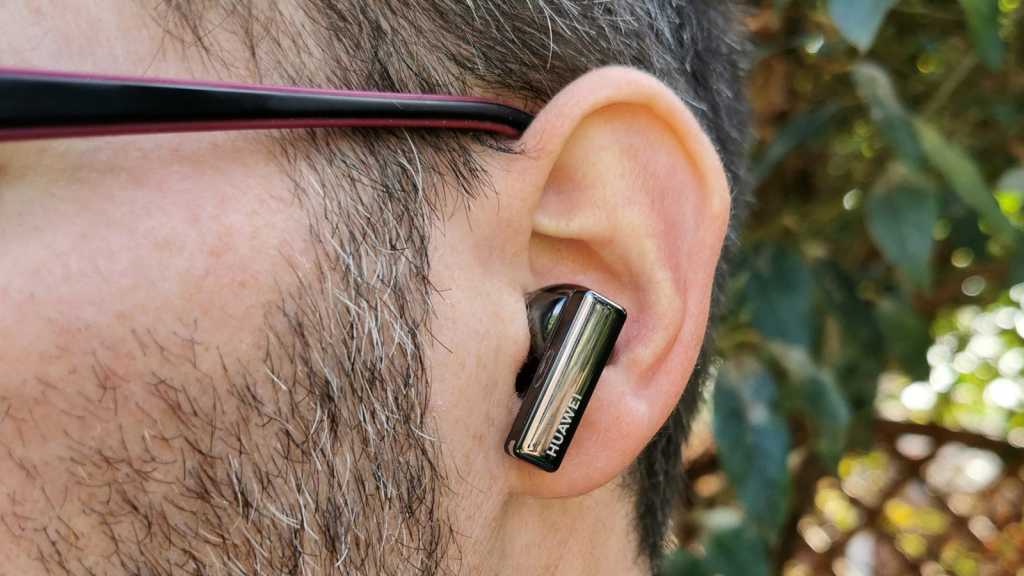 Huawei launched its FreeBuds 3 – open-fit true wireless earbuds – before Apple took the wraps off the AirPods Pro. Both have active noise cancelling, but the open design of the FreeBuds meant noise cancelling wasn’t all that effective in really noisy environments.

It wasn’t a huge surprise that the company followed up with the FreeBuds 3i which were a closed-fit design. But they weren’t really an answer for AirPods Pro: they were a budget option for those wanting noise cancelling without spending the heady £249/$249 required for a pair of Apple’s finest.

Now, though, the FreeBuds Pro have arrived. And the name should give you a strong hint about where Huawei is pitching these true wireless buds.

Design-wise, there are a few similarities but the squarish stalk design aims to make the FreeBuds Pro look as different as possible. Plus, where the AirPods come in white only, the FreeBuds Pro are available in white, black and a new Silver Frost colour that looks a bit like a darkened chrome finish. 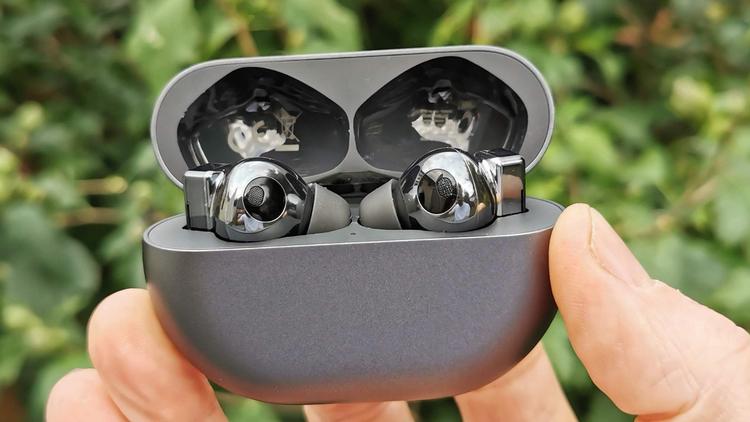 The case doesn’t: it’s matte grey and – like the FreeBuds 3 – supports wireless charging. Total battery life is 30 hours, just over double that offered by the FreeBuds 3i.

As you can guess, that’s without noise cancelling enabled. And the same goes for the seven-hour battery life between charges for the buds. Listening to music with ANC will reduce that to about 3.5-4.5 hours, and it’s 2.5 hours for phone calls.

Inside each bud is an 11mm driver which is suspended in Huawei’s custom-designed stabiliser. It says this is to eliminate distortion and ensure that only the intended movement of the driver produces the sound you hear.

There are three mics in each bud, one inside by the driver and two facing externally. They have various functions besides picking up your voice for phone calls, such as active noise cancellation, wind reduction and also for the awareness mode which allows you to hear what people are saying or background sounds when you need to be focused on things other than listening to music. 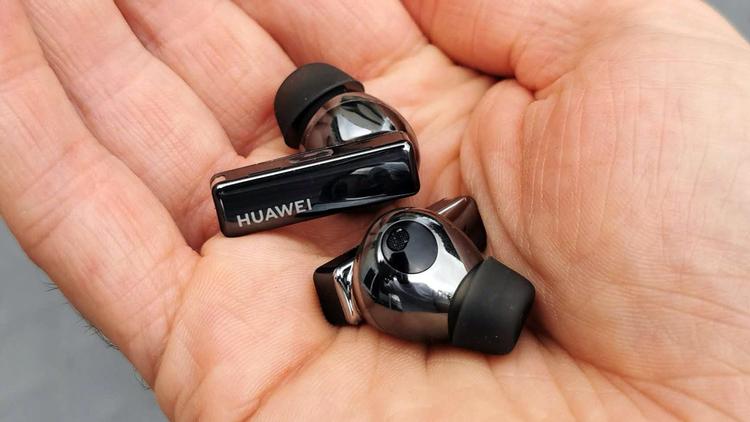 The headline feature is dynamic noise cancelling, which goes one better than the FreeBuds 3 (and 3i) by detecting the type of environment you’re in – using microphones, the IR sensor and machine learning – to automatically switch between three ANC modes: Cosy, General, Ultra.

In simple terms, these determine how much noise reduction is applied, with up to 40db in Ultra mode – intended for flights and other places where there’s a lot of background noise.

A lot of wireless earbuds use tap gestures to control playback and other functions. This tends to be unreliable which is, presumably, why Apple switched to a squeeze gesture for the AirPods Pro. And so it is here: you pinch the stalk to play or pause, and pinch and hold for a couple of seconds to toggle through the ANC modes you’ve ticked in the companion app, AI Life. 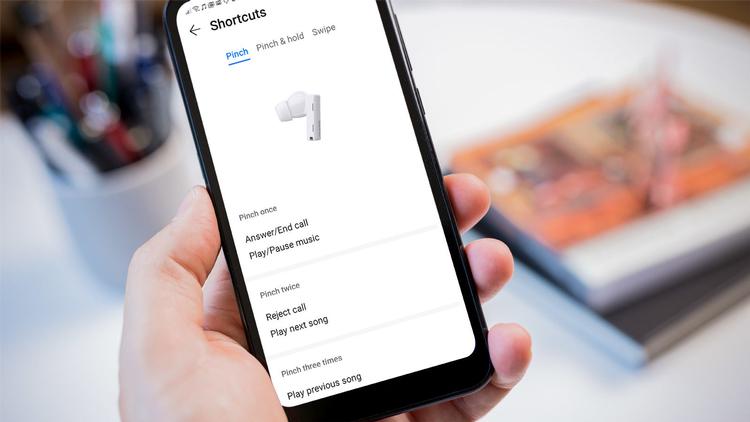 You can disable the ‘off’ mode, for example so that pinching and holding switches between dynamic ANC and awareness mode. And for most people, this setup will make the most sense as there’s not much point in having an ‘off’ mode except to save a little battery power.

That’s because the silicone tips form a seal in your ear canal which blocks out a lot of noise without ANC. The mediums are installed, and you can fit small or large tips if you need to. In the app, you can test the fit and it will play a short clip of music and use the mics to figure out if it’s a good seal or not.

A bonus feature is the ability to connect the FreeBuds Pro to two devices at the same time. This is different from pairing them with multiple devices: you can have these earbuds connected to, say, a laptop and your phone simultaneously.

You can’t hear audio from both together, but the buds can switch between the two instantly, so if you phone rings, you don’t have to faff around disconnecting the FreeBuds from Bluetooth on your laptop first: the call will take priority over audio from the laptop.

The FreeBuds Pro sound great. The 11mm driver is smaller than in the Freebuds 3 and larger than the 3i’s.

Huawei says that it’s not just the driver responsible for improved quality. It’s a combination of various components: the stabiliser, the internal mic and the Kirin A1 processor which all work together to ensure you hear the clearest sound with as little external noise as possible.

Obviously, sound quality is subjective, but to my ears, the FreeBuds Pro succeed on that goal. Vocals are clear, there’s good separation between instruments and deep, controlled bass.

I paired them with my trusty P30 Pro, which meant I could try out the various Dolby Atmos modes as well as the Kirin-specific modes such as 3D sound, bass boost and others.

Even without these enabled and leaving all EQ settings at their defaults, the buds offer nicely balanced audio. If I’m being critical, I’d say they lack a bit of top-end – high frequencies are a little muted.

Noise cancelling is excellent. Even in ‘cosy’ mode, the whir of my PC fans is completely eliminated, and in Ultra, the system does a very good job of cutting out air conditioning sound in a car. I’ve not been able to do the ultimate test of wearing them on a flight, unfortunately.

I did test sound quality of phone calls, both using the FreeBuds Pro as the caller and also asking someone else to wear them so I could listen to how the bone sensor and mics picked up their voice.

In both cases, quality is good, though perhaps not noticeably any different from a standard phone call using the phone’s microphone.

You might find you want to enable Awareness mode for phone calls as it’s a strange feeling to hear you voice only inside your head when speaking to someone with ANC enabled. 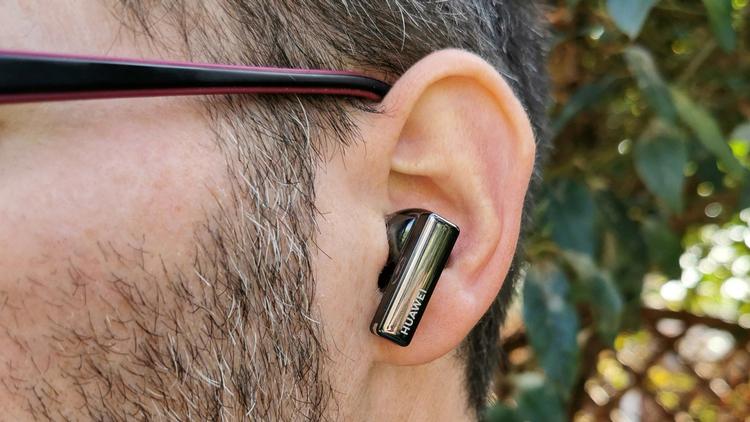 Awareness works pretty well, using the mics to feed external sounds to your ears through the driver. It’s something you can get used to, and it’s great for talking quickly to someone – or hearing an announcement – without removing the buds.

An Enhance voices which can only be enabled and disabled via the AI life app, is meant to suppress ambient noise and make voices clearer. This is the only feature that’s disappointing: if anything, it makes voices less clear. Maybe Huawei can address this with a software update, and you should note that I was testing with an unreleased version of AI Life.

Finally, audio lag is minimal. I’ve had problems in the past with even Huawei’s own TWS earbuds having lag significant enough to make it painful to watch videos where lips are out of sync with voices. But there’s barely any with the FreeBuds Pro – certainly a lot less than 100ms.

The pinch and slide gestures work well, and are better than tap gestures. You don’t have to pinch hard at all, and like the AirPods Pro, there’s a ‘fake’ click sound that tells you the pressure has been registered.

My only gripe is that you have to pinch and then hold for what feels like too long to toggle between ANC modes. And you can’t swap pinch gestures with pinch-and-hold gestures in the app. For the latter, your options are ‘Noise control’ or ‘Voice assistant’, so you can’t toggle between ANC and awareness faster by making it a pinch-only gesture.

You can change what the gestures do for left and right buds independently, so you could set the right to voice assistant and left to noise control.

For pinching, you have the same options as tapping on previous FreeBuds, so pinching once plays/pauses playback or answers/ends a call. Pinching twice rejects a call or plays the next song, and three times plays the previous song.

Although there’s a section in the app for the swipe gesture, there’s no option other than adjusting volume.

The final feature to note is wear detection, which pauses playback if you remove one or both buds. But as with other FreeBuds, this works only if you have a phone running EMUI 10 or later, which basically means you need a Huawei or Honor phone.

One niggle is that it’s difficult to get hold of the buds to remove them from the case because there’s hardly anything to get hold of and the magnets holding them in place are quite strong.

The 2W wireless charging feature is nice to have, but I struggled to get the case to charge using the three chargers I had available. Huawei’s own Wireless Charger Stand was no good because the case sat too low on it.

Really you need a flat charger, but even with the one I have, the case has to be in precisely the right position before the charging light will come on. In fact, it took so long to successfully get the case charging wirelessly I thought there might have been a mistake in the specs and that the case didn’t have wireless charging after all.

The buds charge quickest using a USB-C cable, and if you carry a USB power bank, you won’t have to wait long at all to recharge them enough to finish your journey if they do run out mid-way through it.

At £169.99, the FreeBuds Pro are well prices. You can buy them direct from Huawei and if you do so before (or on) 20 October, you’ll get a free Huawei Band 4 Pro, via a redemption offer.

If you have a Huawei or Honor phone and want some high-end true wireless earbuds, the FreeBuds Pro should be well up there on your shortlist.