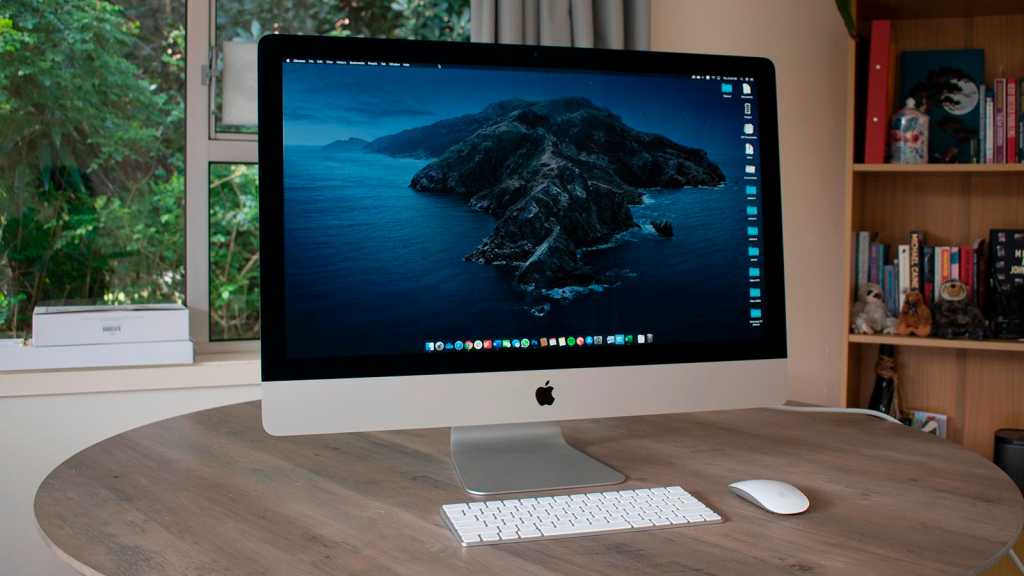 What could be the last Intel iMac is a refined lesson in how to execute a performant, attractive, long lasting, but admittedly expensive desktop option.

If this is the last Intel iMac then I won’t be too sad, because it’s a mighty fine computer. Apple may be moving on to use its own CPUs in the coming months, but this swansong for the 27in iMac design of the last decade is not only one of the best iMacs ever, it’s one of the best desktop computers around.

I’ll concede that when you’re spending this much it might be nice to have an updated design, but bezels matter less on desktop computers than on laptops. The iMac design is a classic, and with a display this good on a machine with no tower unit is alright in my book.

Apple has said it will continue to support this and older Intel Macs with software updates, and after a good month with the 2020 iMac I have no hesitation in recommending it to anyone.

If you have seen or used an iMac in the last five years, then you will know what you’re getting here. Some critics have pushed this as a downside, but I honestly don’t see it as one when the design is this good.

The excellent space-saving advantage of not needing a traditional tower with cables trailing all over the place can’t be overstated and it’s still crazy that the entire guts of the iMac is behind the display.

The power cable in the box is the only cable you need to run the machine, though it’s still annoying you can’t move the display up and down – it only tilts to offer different angles.Apple is all but certain to update the iMac design with the next version that uses its own silicon, so if that bothers you then you should wait.

Big black bezels surround the display but who cares when the display is this good? The 5K (5120 x 2880) screen is the best part of this computer, with superb colour reproduction and P3 wide colour. Brightness is extremely good (as are the auto-brightness settings) and you get True Tone on an iMac for the first time.

This senses ambient light and adjusts the screen to emit less blue light, a tech trick borrowed from iPhones, iPads, and MacBooks. I left it turned on, but professionals who need colour accuracy will need to turn it off.

Unfortunately, my review unit did not come with Apple’s new nano-texture glass option. A £500/$500 add-on at point of sale and is the same process used on Apple’s Pro Display XDR. It’s not a coating but rather a process that etches the entire display itself to create an anti-glare effect and very low reflectively.

I can’t speak to its effectiveness then, but I will say that I didn’t ever wish I had it. If your desk or office space is right next to or opposite a sunny window, then you might want to consider it.

The iMac ships with the wireless Magic Keyboard, a thin low-travel keyboard in a laptop-style that I personally get on with very well but won’t be to everyone’s taste.

Much worse is the wireless Magic Mouse 2, an absurdly low-profile mouse that you can’t use when charging (the port is on the underside). I quickly switch to my Logitech MX Master 3 instead.

Better is the – finally – 1080p HD webcam. This is unbelievably the first iMac with a camera over 720p and it’s a shame that Apple might only have done it because of all the pandemic-induced video calls we are now all doing.

Also improved are the microphones and speakers, which actually might be my favourite upgrade of the lot. I wouldn’t go so far as to christen the mics “studio-quality” as Apple boldly claims, but they were good enough for me to record acoustic guitar into Garageband and not cringe at the results.

I also found myself not using my headphones for Zoom calls such was the good pairing of the three mics with the speakers, the latter’s EQ controlled intelligently by the T2 with better response and bass. It makes the iMac a great device to stream films and TV on, too.

Apple has only updated this 27in model with Intel’s 10th-gen CPUs, so the 21.5in carries on with 8th-gen – a shame for those wanting a smaller display.

Since its release, Intel has rolled out its 11th-gen Tiger Like CPUs but this 10th-gen iMac is a very good performer, so you shouldn’t worry about it being technically not the newest. It is the last Intel Mac, after all.

It’s the most expensive of three base configurations Apple offers, with the cheapest model offering a 3.1GHz 6-core i5 with 256GB SSD, and mid-range option with 3.3GHz 6-core i5 and 512GB SSD. See below for full pricing.

HP sells its All-in-One 27-dp0041na with Core i7-1065G7 but it’s only a 1.3GHz base frequency. It can Turbo Boost up to 3.9GHz though, and the £1,000 model comes with 16GB RAM ad 512GB SSD, with a wired keyboard and mouse thrown in. The design isn’t as elegant or premium as the iMac, but if you don’t push your desktop too hard and would prefer a Windows machine, this isn’t a bad alternative.

All the 27in iMac models support Apple’s Hyper-Threading, so each processor core can run two threads simultaneously, helping to improve intense workloads and increase the performance of each core.

You can upgrade the components at the point of purchase on any model, and Apple now offers up to a Core i9, 128GB RAM, and 8TB storage, though you’ll pay a premium if you want to kit it up. This is not a cheap endeavour, and it’s also the first time the 27in iMac only offers SSD. The hybrid Fusion Drive is no more.

For most mid-level computing tasks, the base model should be fine, and my top-end review unit performed excellently. RAM management was very good even at the lowest 8GB option while the i7 paired with it to easily crunch through tasks as a flitted between Chrome (the notorious RAM-hog), Photoshop, Word, Spotify, Todoist, Slack, Pocket Casts, and other apps. This is a whip-fast computer, there’s no doubt about that.

My main complaint is the lack of upgradability with only the RAM accessible to the user to change. But if you’re worried about that, you probably won’t be buying an iMac in the first place.

It almost goes without saying, but this is not a gaming machine. Yet for high-end photo processing, the model I reviewed was more than adequate, and I’d wager that only a small bump in RAM would be all you’d need for smooth video editing projects in Final Cut. It can Turbo Boost up to a heady 5.0GHz when the going gets tough.

The port situation around the back of the iMac is also generous for all but the most peripheral-obsessed. You get a 3.5mm headphone jack, full-size UHS-II high-speed SD card slot, 4x USB 3, 2x Thunderbolt 3 USB-C and a gigabit Ethernet port.

Benchmarks below compare the iMac I tested to other iMac and MacBook models from this and last year. Impressively, this Core i7 more than holds its own against 2019’s 8th-gen Core i9 when it comes to raw CPU power.

I tested the iMac running macOS Catalina 10.15.6, and it’s a fine interpretation of macOS that is very similar to the last four or so years of the operating system.

There’s not much new here, and not much to surprise a seasoned Mac user. The best compliment I can give it is it immediately got out the way and let me be productive.

Like High Sierra that preceded it, Catalina is a version where older 32-bit apps will not run properly as Apple encourages the full move to 64-bit. This did not affect me personally but if you’re using any older software you might find it doesn’t play nice with Catalina.

Some of Catalina’s notable new features only affect MacBooks, such as a battery health manager.

Starting at £1,799/$1,799, the 2020 iMac is not the cheapest computer going but as far as all in one desktops go it’s still my pick above anything on the Windows side. The draw of Windows PC building is the upgradability – all in one attitude suits the Mac far better.

You can buy any of the three below configurations direct from Apple. I reviewed the third spec:

You can make upgrades to the components if you purchase online.

While many won’t consider it because it’s expensive and runs macOS that doesn’t mean this isn’t a superb desktop computer. It’s the best iMac ever made, technically speaking, and has done well as the send-off to Intel that it has become.

Aside from the initial disappointment you might feel about the lack of design change, the 2020 iMac delivers excellent performance and a stunning 5K screen in a machine that can be as simplistic or as hard-working as you want it to be.

Windows PC die-hards might not be swayed, but for anyone who is OS-agnostic and wants a sleek all in one for everyday computing with a bit of media consumption or photo editing thrown in, it’s a fine buy that should last many years.