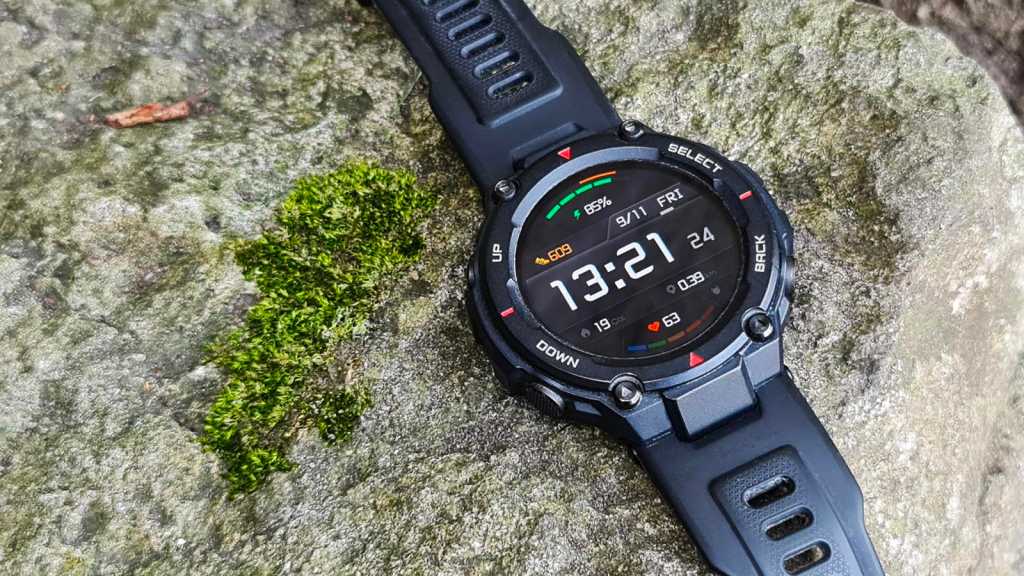 A competent effort from Huami that fills basic fitness-tracking and smartwatch needs at a low price. The Amazfit T-Rex boasts a hardy design and great reliability, thanks to its long battery life.

Borrowing from the likes of the Amazfit GTR and Amazfit Stratos 3, the T-Rex is another of the company’s circular-faced smartwatches, however, this time it’s encased in a toughened polycarbonate body and boasts MIL-STD-810G certification, as well as extensive battery life that’s rated for up to 20-days of regular use.

Considering the T-Rex is meant for wear during activities like hiking and climbing in the wilds, it certainly looks the part. The choice of polycarbonate over stainless steel or titanium obviously keeps costs down but also ensures the watch remains (maybe too) lightweight and yet surprisingly hard-wearing – repelling visible scratches and dings after an extended period of wear.

The flip side is that this plastic build just isn’t as premium as what’s available on rivals from the likes of Suunto or Garmin, giving it a toy-like appearance to some degree, similar to that of Casio’s G-Shock G100, for example.

The four etched metal hardware buttons (two on either side of the casing) feature a slight click that’s pronounced enough to feel through thick gloves, which is appreciated, while the back is more polycarbonate, although in contrast to the angular exterior it’s rounded to sit more comfortably against the wrist.

That MIL-STD-810G certification means Huami has tested to T-Rex and proven that it can continue to function in both very hot (up to 70°C) and cold (down to -40°C) environments, as well as withstand high humidity and pressurised salt-water jets for extended periods.

Perhaps one of the strangest aspects of the T-Rex’s design is its strap. The fact that it uses both a proprietary design and that it’s non-removable isn’t ideal (even if it does feel secure), but it’s the material chosen that really stands out. 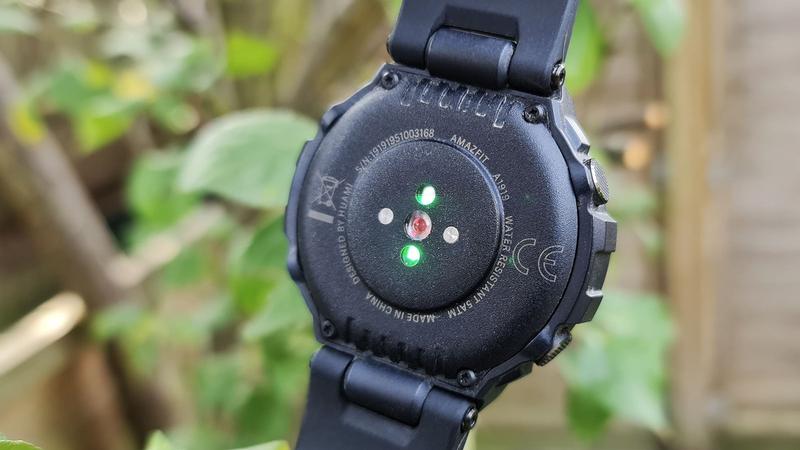 The silicone at play features a surprising amount of elasticity, so much so that it comes across as cheap on first impressions, but in practice offers outstanding comfort and flexibility in exactly the sorts of situations the T-Rex was meant for. Whether you’re scaling a rock face or simply working hard on the elliptical at the gym, for such a bulky watch, the T-Rex feels deceptively unobtrusive and comfortable on the wrist.

There’s no microphone or speaker setup on the T-Rex, so voice assistant support isn’t on the table, however, an integrated vibration motor does allow for silent alarms, which prove useful.

Huami has leant into the T-Rex’s rugged aesthetics when it comes to colour options, with the Rock Black model we tested being just one of five colourways to choose from. All feature a black bezel around the watch’s circular display but come with matching casing and strap combinations otherwise.

There’s also Gun Grey, Khaki and Army Green – if you fancy a flat colour – or there’s Camo Green, which as its name suggests, features a light green grey/brown camouflage print against a white base.

The convex bezel helps protect the watch’s 1.3in circular screen from glancing blows, should you catch it, while the display itself is covered by Gorilla Glass 3; which after long-term wear only shows signs of micro-abrasions, meaning it’s still wholly visible and useable months after being unboxed.

Colours, contrast, resolution and, most importantly, brightness are well suited to strongly-sunlit days and it only takes a swipe and a tap to adjust brightness or toggle the watch’s auto-brightness feature on or off. 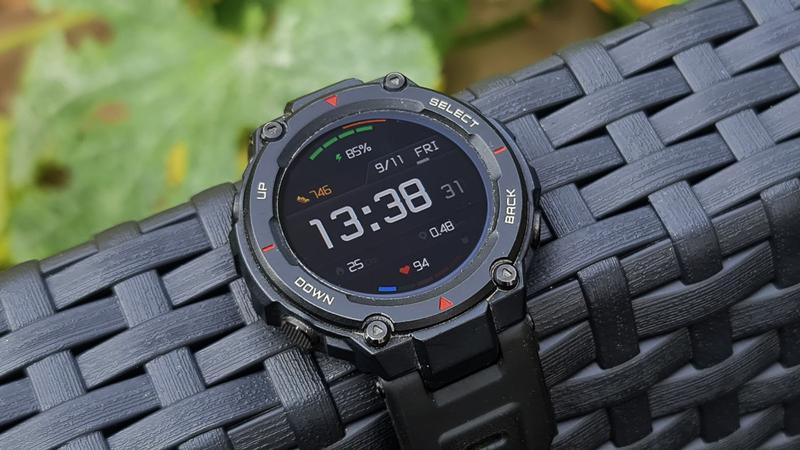 There’s also a flashlight feature, which maximises the display’s brightness while showing a completely white screen – a tool that saw more use than expected in real-world testing.

The use of AMOLED technology also lends itself well to offering always-on functionality. While the T-Rex’s default tilt-to-wake system seemed perfectly responsive (and can be made more sensitive, if desired), for those who never want to wait for the display to fire up and are happy with the added battery drain, the watch can permanently show the time, battery level and your step count.

It’s just a shame that considering there are about 30 different watch faces to choose from, the always-on watch face is always the same, regardless of what you choose.

Huami’s proprietary user experience is simple but effective, sharing some similarities with the likes of Wear OS with regards to its touchscreen-based directional user navigation.

By default, you’re met with your chosen watch face, which you can change with a long-press or via the watch’s companion Android or iOS app. Swiping up or down takes you through a carousel of features including quick settings (where you can enable the flashlight, power saving mode, Do Not Disturb, control brightness and lock-off touch input), steps and calories – relative to your daily goal and heart rate. 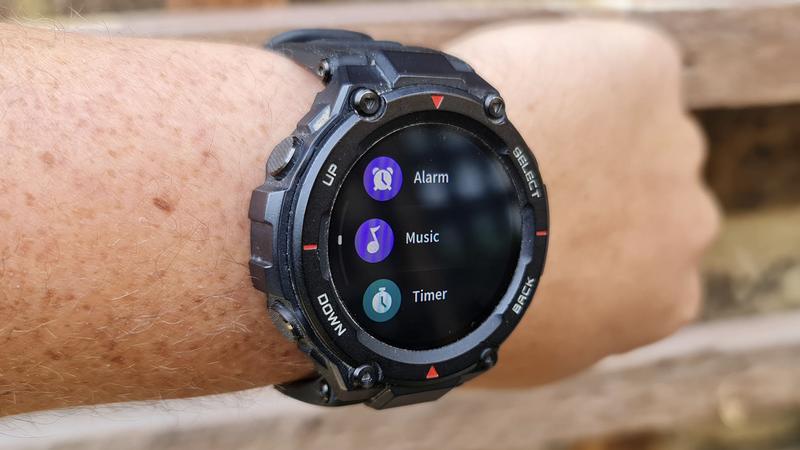 Left lets you view and dismiss notifications mirrored from your phone (there’s little else in the way of interaction here), while on the right is the watch’s main function menu; where everything from the T-Rex’s workouts to weather, Find My Phone and Settings all live.

Confusingly, pressing the top-right hardware button (labelled Select) from the main watch face also brings in a menu from the right, but a different one – acting as a shortcut to the watch’s 14 workout modes. 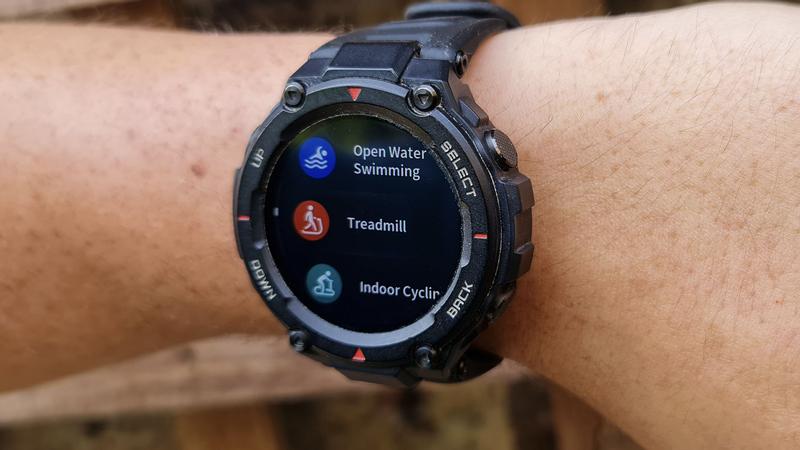 We’ve already covered a few of the T-Rex’s supported workout modes, like hiking and elliptical routines, and although the overall pool of 14 modes seems relatively small, it covers common outdoor pursuits (walking, running, cycling) as well as more unorthodox ones; such as skiing, triathlons, plus separate pool and open-water swim tracking (it’s swim-proof up to 5ATM).

Another quirk of the T-Rex’s user experience is that some aspects, like feature order or the ability to schedule when tilt-to-wake is active, are only accessible from the companion app – meaning it’s worthwhile exploring both the watch and app interfaces to make sure you’re able to get the most out of what the T-Rex has to offer.

As for tracking data – best accessed via the companion app – the T-Rex keeps tabs on steps, kcal, heart rate and sleep by default. It also features a metric called PAI, which scales depending on your other fitness metrics, designed to serve as a general fitness score over the course of a seven-day period. 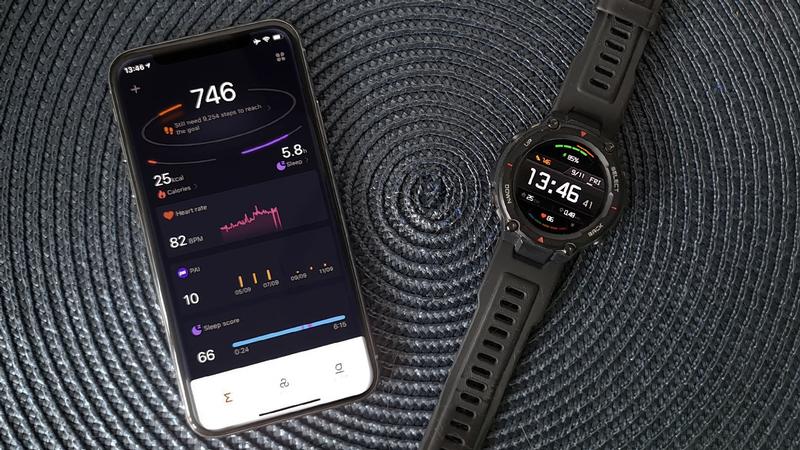 You can drill down on aspects like sleep to see information such as sleep duration, sleep state and receive a sleep score; as well as some general advice. It’s not particularly in-depth, nor does it appear to be dynamic, should your habits change, but it’s still an appreciated inclusion, despite its simplicity.

Heart rate and distance measurement proved reliably consistent over multiple sessions (tested by running the same routes over a number of weeks), as well as against pricier wearables, like the Huawei Watch GT 2e and Apple Watch. It did, however, sometimes take a second to adjust to sudden shifts in pace and heart rate.

As for user interaction – navigating around the T-Rex’s UI is a little inconsistent, with dropped frames or stutter and lag-prone touch input from time-to-time, while fluidity was more forthcoming at others. Know that you’re not going to get Apple Watch or Samsung Galaxy Watch 3-levels of UI smoothness here.

The T-Rex’s 390mAh battery is quoted at offering up to 20 days of use based on always-on heart rate and sleep monitoring, active GPS for 13 minutes a day, receiving 150 daily notifications that activate the screen daily, 30 wrist-raised screen activations a day and five minutes of ‘other’ usage per day.

Real-world longevity understandably depends on how heavily you lean on the T-Rex’s activity-tracking capabilities – especially when using features like GPS.

As a watch first and foremost – pushing notifications, using the flashlight and checking the time – it usually lasted around five to six weeks on a charge, while regular workouts (running for 30 minutes, three times a week with GPS enabled), drained the T-Rex in (at their quickest) three weeks. Hiking for an hour with GPS on saps around 4% to 5% charge.

When it comes to recharging the T-Rex, there are two POGO pins on either side of that BioTracker heart rate sensor on its back. These attached to a proprietary USB adapter using strong magnets and is easy to align and attach without issue. It doesn’t sit well on a flat surface while charging, making it a poor nightstand clock when not being worn.

The T-Rex reaches 41% charge after 30 minutes charge time, 87% after an hour and reaches full charge in just under 90 minutes. While these speeds aren’t blistering, considering how infrequently the T-Rex requires charging, it’s a minor inconvenience at best.

The Amazfit T-Rex hits the nail on the head with regards to its intentions as a rugged fitness-centric smartwatch that’s built to withstand challenging outdoor conditions whilst also not breaking the bank.

It balances smartwatch fundamentals with a bevvy of fitness-tracking features. You can’t drill particularly deep with the metrics that the T-Rex provides, there’s no compatibility with third-party apps, should you want to share your fitness data around and user interaction could be smoother but for the price, there’s are acceptable omissions – so long as you’re aware of them beforehand.

If you’re into its rugged aesthetics and humble feature-set as a competitively-priced fitness-tracking smartwatch, the Amazfit T-Rex is certainly worth consideration.