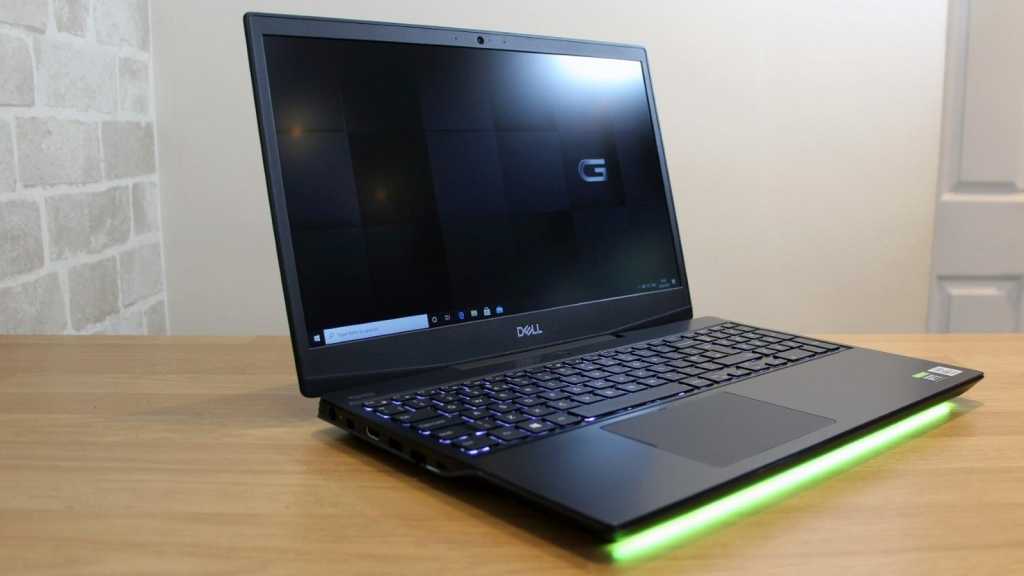 The Dell G5 15 has good gaming pace and solid components elsewhere, and it also has great battery life and a decent price. However, the washed-out screen, poor ergonomics, chunky exterior and mediocre connectivity all its prospects when stacked up against other RTX 2060 notebooks.

The Dell G5 15 Gaming (5550) is the latest gaming laptop to emerge from the Texan computing behemoth, and this heavyweight contender combines tempting technology with relatively affordable pricing.

In other words, an alternative for those who can’t afford one of Dell’s Alienware laptops.

The Dell G5 is finished in a shade called “Interstellar Black” – in reality, the black plastic is coated with glitter. It’s not always over the top – indeed, from some angles it looks like the lid is sand-blasted – but it makes the Dell stand out. There are sizeable air vents at the rear, and the base includes RGB LEDs that make the desk glow.

The G5 is 25mm thick and weighs 2.34kg, so it’s hardly slim or light. The pricier MSI GS66 Stealth and the cheaper Acer Predator Helios 300 are both 15.6in machines that are slimmer and lighter.

And if you really want to slim down, the 14in Asus ROG Zephyrus G14 only weighs 1.6kg and deploys an 18mm body.

The G5 15 Gaming is mediocre elsewhere too. There’s a little give in the base, and the single-hinged lid has too much movement.

It’s got a USB 3.2 Gen 1 port and a Type-C connection that supports DisplayPort, but there’s no faster USB 3.2 Gen 2 support and its two additional full-size ports only support USB 2.0.

The Dell’s power button doubles as a fingerprint reader, but it’s too soft. There’s a 720p webcam which has middling quality and no Windows Hello support.

The keyboard’s layout is fine, with a numberpad, a double-height Return key and separate cursor buttons, and it’s got RGB LEDs that can be customised with effects and different colours in four zones.

That’s good but the keyboard performance is disappointing. The keys are too small and spaced slightly too far apart, and they’ve not got enough travel. They feel underwhelming beneath the fingers – hollow and cheap.

The trackpad isn’t great, either: the corners require too much force to register a click, and the pad sits too far over on the left of the machine, so it can get in the way when using the WASD buttons.

Ultimately, the G5 15 Gaming typing and pointing gear is only suitable for everyday use and casual gaming – it’s not good enough for anyone who takes gaming seriously. Rivals have more to offer here, particularly the keyboard assuming you’ll plug in a gaming mouse for gaming sessions.

This laptop has a Full HD VA display with a 144Hz refresh rate, but there’s no syncing. Nevertheless, that’s good enough to provide a crisp, smooth experience in single-player titles and eSports games.

The brightness level of 325 nits is good enough for all indoor scenarios, and its black point of 0.27cd/m2 is reasonable. The contrast ratio of 1,204:1 is also good, providing loads of punch and depth.

The good contrast is undermined by mediocre colours. The colour temperature of 7,970K is too chilly, and the display only rendered a middling 83.9% of the sRGB gamut. The Delta E of 2.63 is reasonable, but the temperature and gamut figures mean that the G5’s display looks washed out, and it struggles to bring out the subtlest differences between similar shades.

The Dell’s panel is good enough for everyday gaming – its contrast and brightness measurements see to that. It’s better than the Acer Helios 300 here. However, the MSI is punchier, with superior benchmark results and a 240Hz refresh rate.

The speakers have good volume, and their mid-range is crisp – but the weak bass and slightly tinny top-end undermine that. This audio gear is fine for eSports, casual gaming and mainstream media duties, but that’s it, and a gaming headset would be far better.

The G5 15 Gaming we’ve reviewed uses some of the most popular gaming laptop hardware of the moment – an Nvidia GeForce RTX 2060 graphics card and an Intel Core i7-10750H processor.

The specification is rounded out by 16GB of memory, Wi-Fi 6 and Gigabit Ethernet. There’s a 512GB SSD with decent read and write speeds of 2,308MB/s and 1,270MB/s, but no secondary hard disk.

The RTX 2060 is a decent performer. In Far Cry New Dawn and Wolfenstein it returned Ultra settings framerates of 79fps and 98fps – the former score is better than any rival, while the latter sits between the MSI and Acer. In Sky Diver, the G5 scored 36,071, which is marginally better than both competitors.

There’s enough speed to play single-player games smoothly at demanding settings, and eSports titles will easily run at the pace required for that 144Hz screen.

The Intel CPU delivers good pace in benchmarks – it’s quicker than the Acer and MSI machines in Geekbench and PC Mark. The Dell can handle everyday computing, loads of browser tabs, Office applications and mainstream photo-editing without issue.

If you want to work, though, AMD chips are better. The Ryzen 7 4800H included in the Asus was significantly faster in Geekbench and PC Mark thanks to its extra cores, and it’s better for video-editing, multi-threaded work and multi-tasking. Even the AMD Ryzen 5 4600H, which is used in cheaper versions of the G5, is faster than the Intel chip.

The Dell is a middling thermal performer. When gaming the noise levels are low, especially if you’re running less-demanding titles – and even at full tilt, a headset will easily mask the noise. However, the area above the keyboard and the base panel both become warm.

The underside will be uncomfortable if you’re using it on your lap. It’s a little louder and hotter when running work tools, too. This laptop is better for gaming than for work – and it’s at its best when sat at a desk.

Dell fights back with impressive battery life. In our video playback benchmark it lasted for just over eight hours, and it handled six hours of work – if you’re careful, this machine will see out a full day at the office. Its gaming lifespan of one hour and forty-three minutes is more conventional, but overall it’s level with the MSI, not far behind the tiny Asus, and miles better than the Acer.

Their prices range between £1,149 and £1,549, with the differences found in other key areas: more affordable models include the GTX 1660 Ti, which is an esports-capable GPU that omits Ray-Tracing, while spending more nets you an RTX 2070 Max-Q. Pricier versions of the machine also include 16GB of memory and a 1TB SSD.

The G5 is more affordable in the US. The entry-level model costs $839 and includes a Core i5-10300H processor, modest GTX 1650 Ti graphics and a 60Hz display. Further models mimic the UK’s range, with Core i7 silicon available alongside 144Hz displays and more powerful GPUs.

The American machines can be customised with different storage capacities, too, and pricier models can also be fitted with 240Hz displays. Sadly, Dell lists an $879 AMD-based Special Edition machine in the US with the superb Ryzen 7 4800H processor and Radeon RX 5600M graphics.

Dell G5 15 Gaming laptop is a fast machine for games, decent in applications and has good battery life, but it’s also mediocre in lots of key areas – the keyboard and trackpad are underwhelming, it’s thicker and heavier than its rivals, and the screen is pallid.

If you’re looking for an RTX 2060-based laptop, the Dell shouldn’t be your first choice. Indeed, it only makes sense if you’re going to opt for one of its cheaper configurations.

If you want a GTX 1650 Ti or GTX 1660 Ti-based laptop for esports or mainstream games, it’s a reasonable option that’s just as good as competitors at this more affordable end of the market, where its obvious flaws are more forgivable.