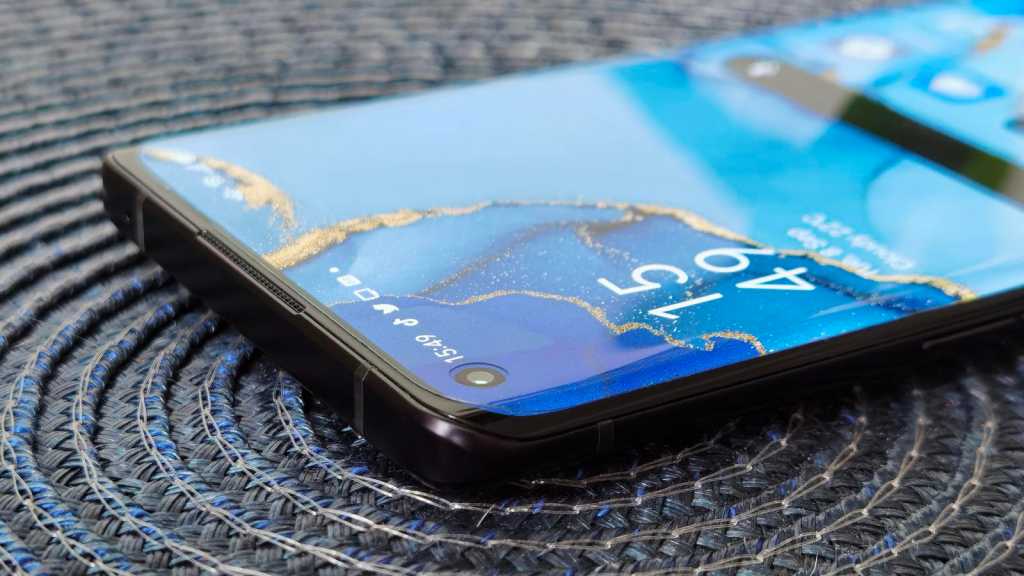 One of the world’s thinnest 5G phones, you’d be forgiven for mistaking the Find X2 Neo for a fully-fledged flagship; with a stunning display, versatile cameras, great fast-charging and more. Considering what else is out there, it’s a little on the pricey side, but if it’s a thin, stylish design you’re after the Neo should serve you well for a long time.

While each model offers a little more ‘special sauce’ than the last, the Lite and Neo are bound by their premium mid-range Qualcomm Snapdragon 765G chipset in the same way that the Find X2 and Find X2 Pro both run on true flagship-class silicon, in the form of the Snapdragon 865.

With this distinction in mind, the Find X2 Neo is to the Find X2 Lite what the Find X2 Pro is to the standard Find X2 – an enhanced take on strong underpinnings that incorporates more premium features meant to elevate the underlying experience.

While the Find X2 Neo boasts a number of great qualities, its design is arguably one of its most impressive traits.

It’s bittersweet to say that for a brief time, the Neo was the world’s thinnest 5G phone, at just 7.7mm; that was until the Vivo X50 showed up soon after, with its 7.49mm waistline. Provided you’re not choosing a phone solely for its accolades though, this still renders the Find X2 Neo an impressively thin smartphone.

While the unit tested spent a lot of its time in the included TPU case, whenever it was case-free the Neo was a pleasure to wield.

That narrow profile, paired with solid build quality, tight tolerances and premium materials all help give the impression that this is a flagship-class handset. The curved glass front and back present a great hand feel, while the aluminium frame surrounding the edge is squared off slightly to improve grip.

The Moonlight Black colourway (as pictured) is understated and sophisticated but the glossy finish is a nightmare for fingerprints. Meanwhile, the Starry Blue alternative is a more vivacious and less smudge-prone option.

The camera bump is subtle and while there’s no certified water resistance or a headphone jack, we can forgive the Neo because it comes across as such a sleek and well-made device.

Toting a 6.55in display, the Neo treads the line between maximising the viewing experience and just being too darn big. There is a one-handed mode built into the software experience but Oppo doesn’t make it easy to access, so if you get a chance to handle this device before you buy, it would be worthwhile to make sure this fits comfortably in your hands before committing.

Like the design, the display quality would feel just as much at home on a flagship phone as it does here on the Neo. Full HD+ visuals seem perfectly sharp in real-world use and the choice of AMOLED tech guarantees better colours, contrast and power efficiency than equivalent LCD viewing.

While not quite rivalling Samsung’s S20 Series, the Neo does boast a 90Hz high refresh rate; meaning you get to enjoy buttery-smooth visuals as you zip around the UI or scroll through apps like Instagram and TikTok. It’s one of those additions that is best experienced to be appreciated.

Curved edges, a hole-punch front camera and those narrow bezels all help provide a near-uninterrupted viewing experience and further sell the premium feel this phone has been designed to offer.

Moving from the physical to the virtual, Oppo’s own ColorOS 7 user experience can be found running atop Android 10 on the Neo.

While credit goes to ColorOS’ software engineers for reining in some of older revisions’ more unique quirks, there are still some that might give even long-standing Android users a moment to get their heads around.

The aforementioned one-handed mode is only accessible from the notifications shade (which, problematically, is difficult to reach with one hand) and isn’t even searchable within the phone’s settings. You have the option to dismiss notifications by swiping left OR right but not both directions, as on most other Android phones, and on more than one occasion the phone would lock-up momentarily, sometimes becoming unresponsive for up to about 20 seconds, even after tapping the power key.

There’s also a small degree of bloatware (which will likely vary depending on where you pick up the phone), consisting of both first and third-party apps that not everyone will find use in.

Thankfully, said quirks are all actionable via the likes of software updates and Oppo has already demonstrated a willingness to tweak and change its user experience to better suit Western tastes and preferences. Hopefully, that continues as ColorOS keeps evolving.

ColorOS 7 does also have some nice features that deviate from standard Android, like a Dark Mode (turning many UI elements from light to dark in order to reduce eye strain and benefit from greater power efficiency) that can be scheduled, Game Space, which offers useful information and control over pertinent features – like notifications – while gaming, and the Smart Sidebar, which lets you access an ever-present shortlist of favourited apps and tools (this would be a great place to allow one-handed mode, Oppo).

With the same chipset at their hearts, one of the biggest differentiators between the Find X2 Neo and Find X2 Lite are their camera setups. The extra money spent on the Neo affords you a more robust set of sensors with greater versatility; letting you take a wider range of useable photos against more challenging conditions than the Lite would be able to handle.

As such, you’ll find the same 32Mp front-facer on both devices but the Neo’s quad rear camera setup plays host to a 48Mp primary sensor with OIS (optical image stabilisation), a 13Mp 2x telephoto zoom lens, an 8Mp ultrawide sensor with a 115˚ field-of-view and a 2Mp black and white sensor, which is primarily used for depth sensing.

Oppo has undoubtedly given Huawei a run for its money in the image processing department and the Find X2 Neo – while not as capable as its 865-powered Find X2 siblings – still delivers a solid photographic experience, that makes it an acceptable alternative to devices like the OnePlus Nord.

The first thing that stands out when shooting with the Neo is how surprisingly-good the main sensor’s dynamic range is; meaning brightly back-lit shots aren’t off the table. The same can’t be said for the phone’s secondary snappers but this is to be expected and provided you’re working with plenty of light – they all take great images with only minor inconsistencies in colour balance and contrast.

When the lights drop down, those inconsistencies become more pronounced, pushing you to lean more heavily on that 48Mp main sensor, but shooting with Night mode will yield pleasing results; so long as you’re able to hold the phone still and there’s some (even small) light source still present.

You can capture well-stabilised video too, relying on the OIS system when shooting with the main sensor and switching to EIS (electronic image stabilisation) automatically as you pull out to the ultrawide sensor.

While there’s an established difference in the hardware powering the various members of the Find X2 family, it’s interesting to see how they compare against one another and, in some cases, how small the gap is between the Snapdragon 765G-powered X2 Lite and Neo, versus the standard Find X2 and X2 Pro with their 865 chipsets.

In artificial testing, there’s little that suggests the Neo lags behind any similarly-specced Snapdragon 765G-toting smartphone (we compared it against the Find X2 Lite, OnePlus Nord and Motorola Edge in this regard).

So long as Oppo addresses the software instabilities mentioned earlier, there’s little real-world indication that the Neo can’t handle everything from everyday usage to high-fidelity gaming.

A generous 12GB of RAM and 256GB of non-expandable storage (that’s 4GB more RAM and twice the storage of the X2 Lite) ensures that the Neo has enough headroom to last you through a minimum two years without becoming sluggish too.

A battery with a 4025mAh capacity doesn’t sound particularly impressive in its own right but when you factor in that Oppo’s managed to squeeze such a large cell into the Neo’s svelte frame and that, better yet, it supports 30W fast charging, the Neo’s battery setup seems all the more formidable.

As longevity goes, the phone fared will in our artificial tests – on-par or surpassing its Snapdragon 765G-powered and Find X2-branded alternatives. In real-world usage, the phone delivered around 4.5 hours of screen-on time; less than expected based on the benchmarking results but still plenty to see most people through a day’s use, without worry.

That 30W fast charging also means that if you find yourself with low or no battery, the phone only takes a few minutes to replenish enough juice to last you several hours usage. In testing it regained 39% charge from flat after just 15 minutes, hit 71% at the 30-minute mark and was fully charged in just under an hour (with 97% charge at 45 minutes).

The Oppo Find X2 Neo is available now, up for grabs in the UK from retailers like Amazon, Carphone Warehouse, Currys PC World and John Lewis & Partners, with an RRP of £599.

For comparisons’ sake, the Find X2 Lite and standard Find X2, which sit either side of the Neo, cost £399 and (approximately) £799, respectively.

If you want to pick the Neo up with a new 5G tariff, in the UK, EE recommends its £47-a-month, 24-month Essential Plan; which includes 10GB of 5G data per month, unlimited minutes and texts, the ability to gift your spare data to your family, inclusive roaming across 48 European destinations and requires a £30 handset cost upfront.

Oppo is looking to progressively make 5G more accessible for mass-adoption and offering up 765G-powered phones like the Neo is a great way to push its agenda.

While it’s technically a premium mid-ranger, you’d be forgiven for thinking the Neo is a true flagship-class handset after handling one for a short time. The design, fit and finish are all top-shelf, not to mention performance is superb and the camera system is impressively capable.

The biggest challenge that the Neo faces is the price point that Oppo has dressed it with. While it’s a seemingly justified price-tag, based on what the Neo offers – the mid-range market has become the true battleground in the current smartphone landscape.

Phones like the OnePlus Nord, which offer a surprisingly similar feature-set, undercutting devices like the Neo by some margin (even the higher RAM/Storage SKU of Nord, which more closely matches the Neo, is still over £100 less expensive).

The Realme X50 Pro, meanwhile, suffers from more bulk and weaker cameras but embraces a flagship-class Snapdragon 865 and outstanding 65W ‘Super Dart’ fast charging – all for £30 less than the Neo’s asking price.