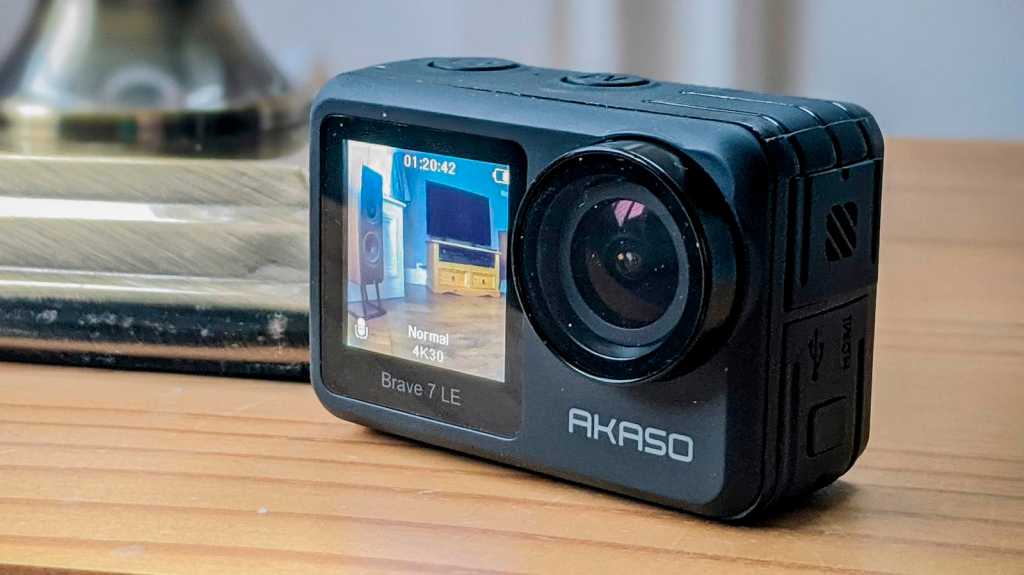 The Akaso Brave 7 LE offers dual screens and 4K on a budget, but the accompanying app leaves something to be desired.

The Akaso Brave 7 LE is marketed as a more affordable action camera to those from GoPro, coming in sub-£140/$140 and boasting a screen on both back and front that’ll prove useful for travel vloggers and content creators.

But what are the ups and downs of this budget alternative? I spent some time with it to find out – read on for my full review.

The design of this camera is clean and refined, with a large circular lens. There are screens on both the front and rear of the camera which you can switch between depending on how you’re filming. At a weight of 75g, you can use it one-handed with ease and slip it into a coat pocket or small compartment within a bag for travelling.

The front-facing screen is smaller than the rear screen, but still usable for anyone who is vlogging or taking selfies. The rear screen is a touchscreen, but you can also control settings using the buttons on the device. 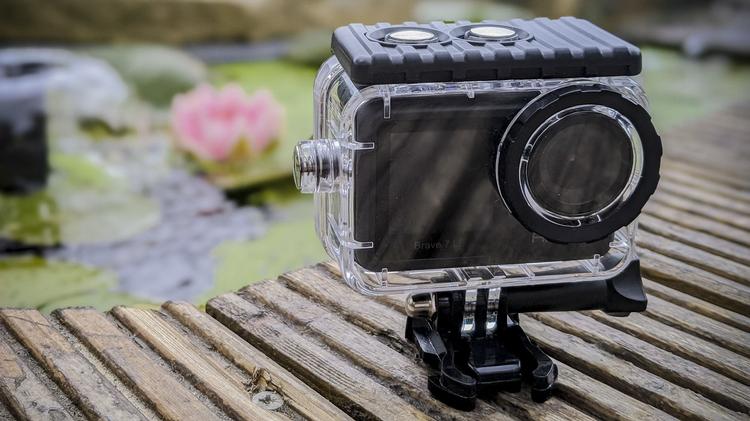 The Akaso Brave 7 LE comes with a waterproof case that’s easy enough to attach and take off and allows you to use the camera up to 40m underwater. Without it, the camera only has a IPX7 rating, making it water-resistant to the odd splash of water here and there. If you want a waterproof camera without the inconvenience of having to use a separate waterproof housing, you’ll have the fork out for something a little pricier.

In the box you get the camera and range of accessories including that housing, a range of different mounts, two batteries, a charging cable and lens cleaners. All of these additional parts are compatible with GoPros and other action cameras, just as you might expect.

If you’re mounting your camera to a bike or helmet for the first time and need some pointers, there are some easy tutorials to follow over on the Akaso YouTube channel that work for most action cameras in the range. 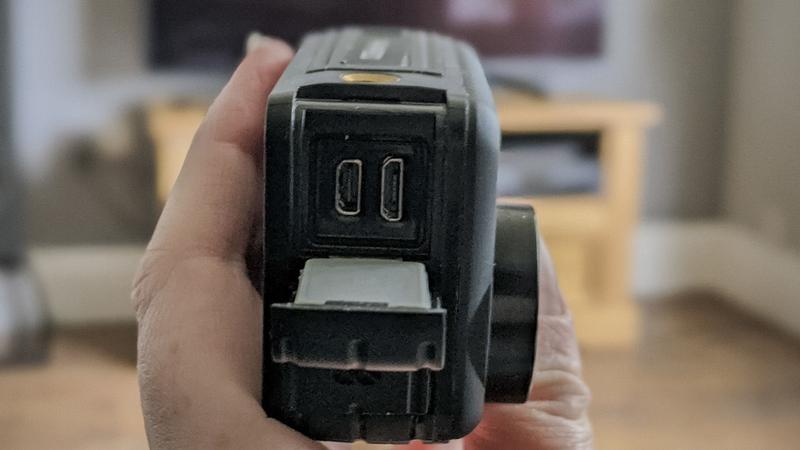 The Akaso Brave supports microUSB charging and connection and can also link up directly to a TV via its microHDMI slot – though a cable for this is not provided in the box. For accessing these slots, you must use a push mechanism, which is a little fiddly but does keep the ports hidden away nice and neatly.

For a budget camera, the Akaso Brave 7 LE captures video extremely well under bright and light conditions, especially on the highest 4K setting. You can choose between nine different manual combinations of resolutions and frame rates depending on your needs – from 720p at 240fps all the way up to 4K at 30fps.

There’s also the option to pick four different zoom options depending on how much scenery you wish to capture within the shot. As for additional shooting options, you can create both time-lapse videos and photos, fast and slow motion, looping videos and burst photos. 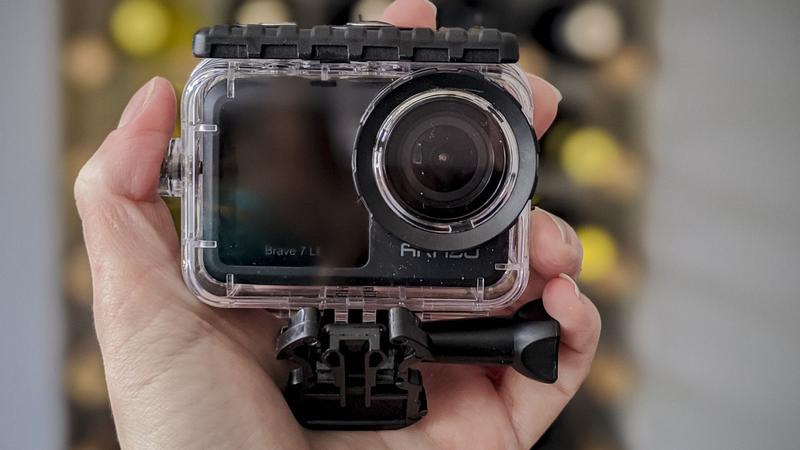 There are no modes for low light/night shooting, but that’s to be expected on an action camera of this price point. That does sadly mean however that shooting in darker conditions loses details and creates quite a poorly contrasting and blurred image.

There’s 6-axis image stabilsation on this camera – software-based rather than optical – which I tested out on a bike. The resulting footage is slightly smoother that you’d get without this feature enabled, but it isn’t anywhere near as good as the likes of the GoPro Hero 8. If you’re looking for a camera to capture extreme sports without the vomit-inducing wobble and shake when viewed back on a big TV, it’s worth looking at something with better stabilisation.

You can find the test footage below – which was taken on the highest setting (4K at 30fps) with image stabilisation and wind-noise reduction on. The footage definitely has issues with glare from the sunlight, and despite being in 4K isn’t quite as crisp as we’ve seen on more premium rivals.

Not that you’ll likely take many, but photos from the Akaso Brave 7 LE are pretty good, with a resolution of up to 20Mp. Colours are bright, there’s good contrast and details are nice and sharp. If you want a lower-quality snap, you can also choose between 16Mp, 14Mp, 10Mp, 8Mp and 5Mp.

The built-in microphone picks up sounds relatively well – though it is a little on the sensitive side if you’re manually moving the device around. For the best audio quality when filming outdoors, you ideally want to use this camera mounted and with the wind-reduction feature turned on. The camera records records 4K at 50Mbps, which isn’t bad for the price. 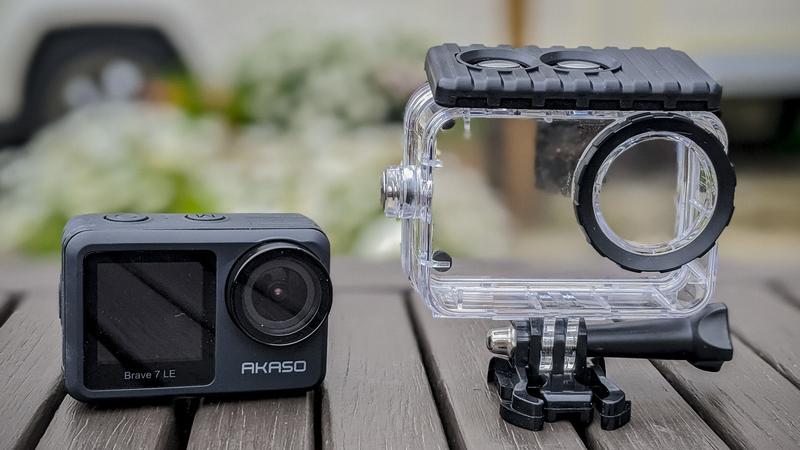 Battery life on the Akaso Brave 7 LE is decent, partly because you get two 1,350mAh rechargeable batteries in the box. I managed to record for on and off for around an hour in total in 4K without grabbing my charger. Putting on a quick 30-minute charge topped it up by around 20%, and it takes around two and half hours to get it to full. The batteries are removable, and can be charged simultaneously on the included battery charger if you prefer.

If you want to remotely control a recording, you can either do this with the handy wrist strap included within the box, or via the companion app. Both worked successfully when testing – however the app was a little slow to start.

In general, the app was poor quality. It was quite a struggle to pair it with the 7 LE the first place, and when navigating it to access photos and videos, it froze several times. Therefore, if you want photos/videos off the camera, the best way to do it is through a USB cable (or card reader) rather than through the app.

You can buy the Akaso Brave 7 LE either directly from Akaso’s website, or via Amazon UK/ Amazon US depending on where you are based.

For comparison, the cheapest GoPro with this resolution is the Hero 7 White which currently costs £179.99/US$£199.99 and doesn’t offer 4K recording, nor does it have a second screen. 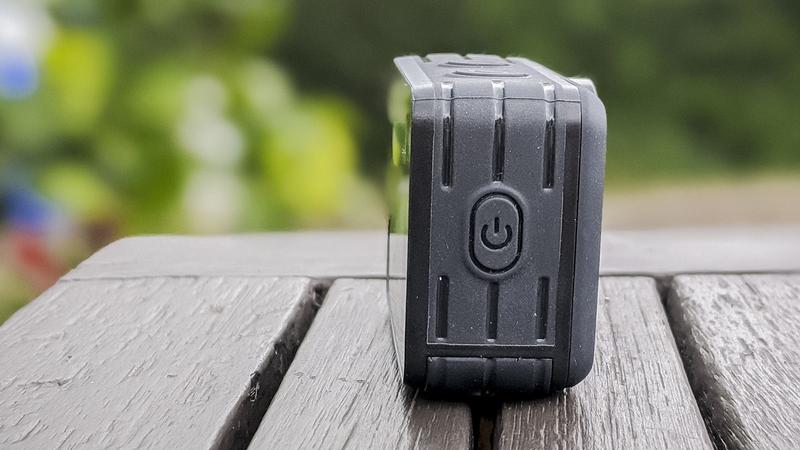 Nonetheless, there are sacrifices to be made by going with a lesser-known brand. For one, the dedicated app from Akaso is just not slick and had issues connecting with my phone and loading pictures on there – whilst GoPro have had a lot of time refining their own software.

It is also worth keeping in mind that a microSD card does not come included with the Brave 7 LE – so this will be an extra cost on top.

If you’re looking for another 4K action camera outside of the GoPro range, then we recommend taking a look at the DJI Osmo Action – which also features two screens. However, it is pricier than the Akaso Brave 7 LE.

For other rivals, you can take a look at our list of the best GoPros and action camera alternatives.

You get a lot for your money with the Akaso Brave 7 LE action camera – 4K video, 20Mp photography, dual screens and a minimalist design, all for an affordable price.

There are improvements to be made with this device, especially when it comes to the companion app which should run a lot smoother and be more user-friendly in general. The lack of waterproofing without a case may also be a disappointment to any keen swimmers out there.

However, if you put those niggles aside, this a compelling budget action camera choice that’s perfect for travel vloggers on a budget, as it doesn’t cost anywhere near the same amount of money as it would for a GoPro with equivalent features.