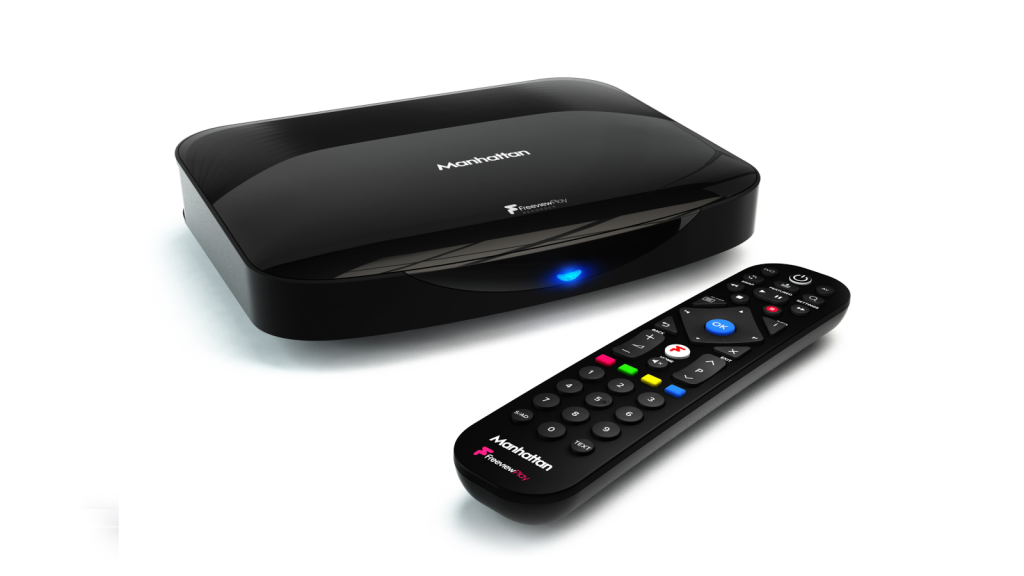 The Manhattan T3-R is the perfect upgrade for those looking for a smarter Freeview experience, complete with UK-focused on-demand apps and PVR capabilities.

In a world seemingly dominated by streaming services like Netflix and Amazon Prime Video, there are still a lot of people that prefer to watch terrestrial TV. The problem is that most Freeview boxes are frustratingly slow, confusing to use or are just a bit ‘dumb’ compared to smart media streamers like the  Roku Streaming Stick+ and  Nvidia Shield. Manhattan is looking to change that with the release of the Manhattan T3-R, offering a premium Freeview Play experience without the monthly subscription you’ll get from the likes of Sky and Virgin Media.

Offering the ability to pause and record live TV, watch a suite of on-demand content from UK broadcasters including BBC, ITV, Channel 4 and Channel 5 and the cleanest user interface I’ve seen in a long time, the Manhattan T3-R offers a great TV-watching experience.

The Manhattan T3-R is a fairly nondescript set-top box, but that’s not necessarily a bad thing given you’ll probably want it to blend into your TV setup, rather than draw attention to itself. It’s a combination of glossy and matte black, with rounded corners and a single front-facing LED to indicate the current status of the box. At 265mm x 207mm x 53mm, it’s certainly not the biggest set-top box I’ve ever seen, and it should fit snugly into most TV setups.

On the rear, you’ll find Aerial in, Loop Out (to use an internal TV tuner), Ethernet, HDMI, Optical and USB ports, but the latter is only for offline software updates and power, so it won’t play content from your memory stick.

It should come as no surprise that the T3-R comes bundled with a remote, but what is handy about the remote – aside from the shortcuts to various smart functions of the box – is its ability to control your TV’s power and audio system too. It means you’ll only need a single remote for your TV setup, rather than switching between two depending on what you want to do.

When it comes to Freeview set-top boxes, the UIs are usually sluggish, unintuitive and generally frustrating to use, but that can’t be said of the T3-R.

The Freeview Play interface offers quick access to many of the core functions of the box, like your watchlists, TV guide, on-demand content and recorded content, and the EPG is both easy to navigate (up to seven days in the past and future) and packed full of useful information about what’s on TV.

There’s not a hint of stutter either, a refreshing change from my Philips Ambilight TV’s built-in (and frustratingly slow) EPG.

The Manhattan T3-R supports 4K, but don’t expect to get 4K when watching old episodes of Top Gear on Dave. There are 85 channels currently available via Freeview, but only 15 are HD – the majority are output in standard definition. That’s not a complaint of the set-top box though; it’s a limitation of Freeview in general, and without 4K on premium TV services, that won’t be changing on the free-to-view service anytime soon.

So, where does the 4K HDR content come from? It’s primarily available via on-demand apps like YouTube and BBC iPlayer where available, although without dedicated Netflix and Amazon Prime Video apps, there’s a gaping hole in the T3-R’s 4K offering.

But with that being said, the Freeview Play set-top box does offer a wide selection of UK catch-up apps. In fact, with BBC iPlayer, ITV Hub, All4, My5, UKTV Play, BBC News & Sports, CBS Catch-up, YouTube Kids and Horror Bites, it offers comprehensive coverage of UK-focused content.

This is the main strength of the Freeview Play system, as the selection of on-demand apps allows you to go back up to seven days in the T3-R’s rolling TV guide and use the streaming services to catch-up on shows you might’ve missed. Selecting an available BBC program will open the show in iPlayer, for example. You can even create custom watchlists comprised of on-demand content from the various on-demand apps, and that’s a feature not offered by any other Freeview Play box on the market right now.

As well as the suite of catch-up services, you’ve also got the option of recording your own content from TV – think of it like Sky Q without the monthly subscription – and is perfect for those shows not available on UK streaming services.

As well as being able to pause and rewind live TV, you’ll be able to record shows on two channels simultaneously while you’re watching a third. Manhattan is also looking into offering three-channel recording capabilities, but in the meantime, the box is smart enough to suggest alternative broadcasts to make recording content from more than two channels possible.

The set-top box is available in 500GB and 1TB configurations, offering 300 and 600 hours of SD capture respectively. It’s more than likely that you’ll be capturing SD footage with the ratio of SD and HD channels available via Freeview, but it’s worth noting that it’ll be captured in whatever quality the source is, so if you’ve got a choice of recording BBC1 or BBC1 HD, I’d go with the latter.

HD channels are sharp and artefact-free, matching broadcast quality, while SD channels don’t quite offer the same level of detail – but again, it’s what was shown on TV, so it’s not technically a fault of the T3-R.

Resolution output ranges from 720p to 2160p, and the system offers a Match Frame Rate setting to make sure you’re enjoying the original 24, 30 or 60 frames per second of the content being shown. It should help avoid stuttering, especially when it comes to higher frame rate content.

On the audio front, you’ll find support for Dolby Digital Plus and stereo sound, which should be fine for most, but it may not be enough to entice cinema fans.

It may seem obvious, but it’s worth noting you’ll need an active internet connection well as an aerial connection to make use of both the Freeview and on-demand TV of the Manhattan T3-R, with the former available via Wi-Fi and a wired Ethernet connection. Wi-Fi seems stable enough to stream on-demand content in my testing, but depending on your setup, you may need to opt for an Ethernet connection.

You can pick up the Manhattan T3-R at £169.99 for the 500GB model from  Amazon and  Currys, while those that want the larger 1TB model can head to  Amazon and pick it up for £199. It’s more expensive than many Freeview boxes on the market, but with premium features like pausing and recording live TV, it’s a worthy purchase if you watch a lot of TV. It boasts a similar set of features to Sky and Virgin Media, although there is a much more limited selection in terms of channels compared to the premium options.

If that’s a little too much for your budget, take a look at our selection of the  best media streamers for more inspiration.

The Manhattan T3-R is a great 4K PVR without the need for a monthly subscription, and it’s slick in operation too. It offers the full Freeview catalogue of 85 channels, with 15 HD channels included, and thanks to the inclusion of a suite of UK-focused on-demand apps, you’ll be able to scroll back up to 7 days on your EPG catch up on shows you might’ve missed. There isn’t any Netflix or Amazon Prime Video though, the only hole in an otherwise near-perfect offering of streaming apps.

If you can’t find the TV show you want to watch via on-demand apps, you’ve also got the option of recording it live, and you can record two channels simultaneously while watching a third, perfect for TV fanatics. The Freeview Play interface is a joy to use, and there’s not a hint of stutter anywhere.

Essentially, if you’re looking to upgrade from the standard Freeview experience to something a little smarter, the Manhattan T3-R is a strong contender.