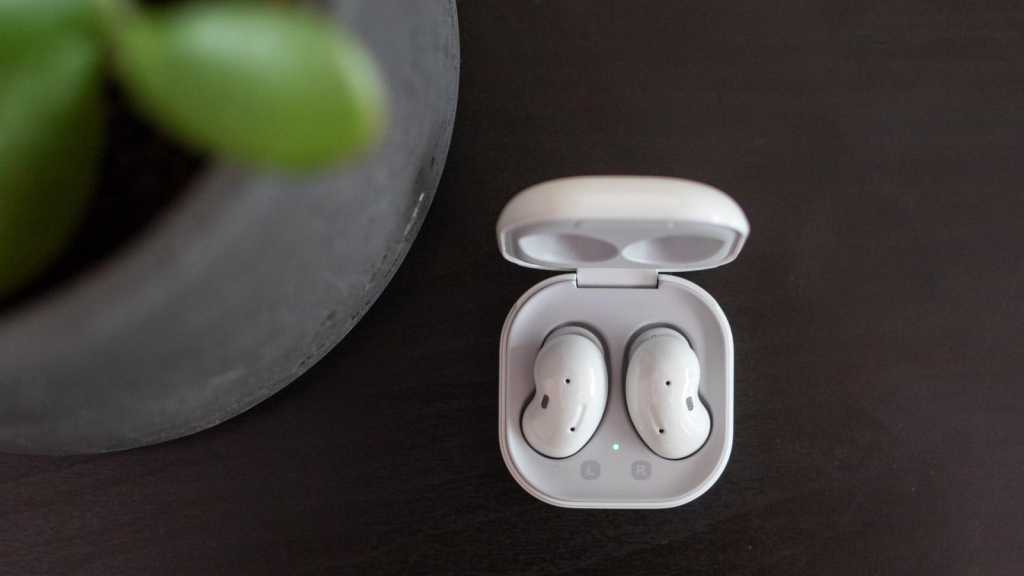 Samsung deserves credit for taking the risk on a weird new design with the Buds Live, not least because for the most part these deliver on their promise. They’re extremely comfortable, surprisingly stable, and honestly after a while you do sort of forget the whole beans bit.

Now that’s out of the way, let’s get on with reviewing the damn things. Samsung’s latest true wireless buds may have an unorthodox design, but don’t write them off just because of that. With wireless charging and active noise-cancelling these deliver a few premium features while nailing the basics like sound quality and battery life along the way.

The design will be divisive – and has its pros and cons – but for some the Galaxy Buds Live will be the true wireless headphones to bean – sorry, beat.

Samsung’s next wireless earbuds will be the Galaxy Buds Pro.

The Buds Live don’t look like any other headphones out there, and for the most part I mean that as a compliment. 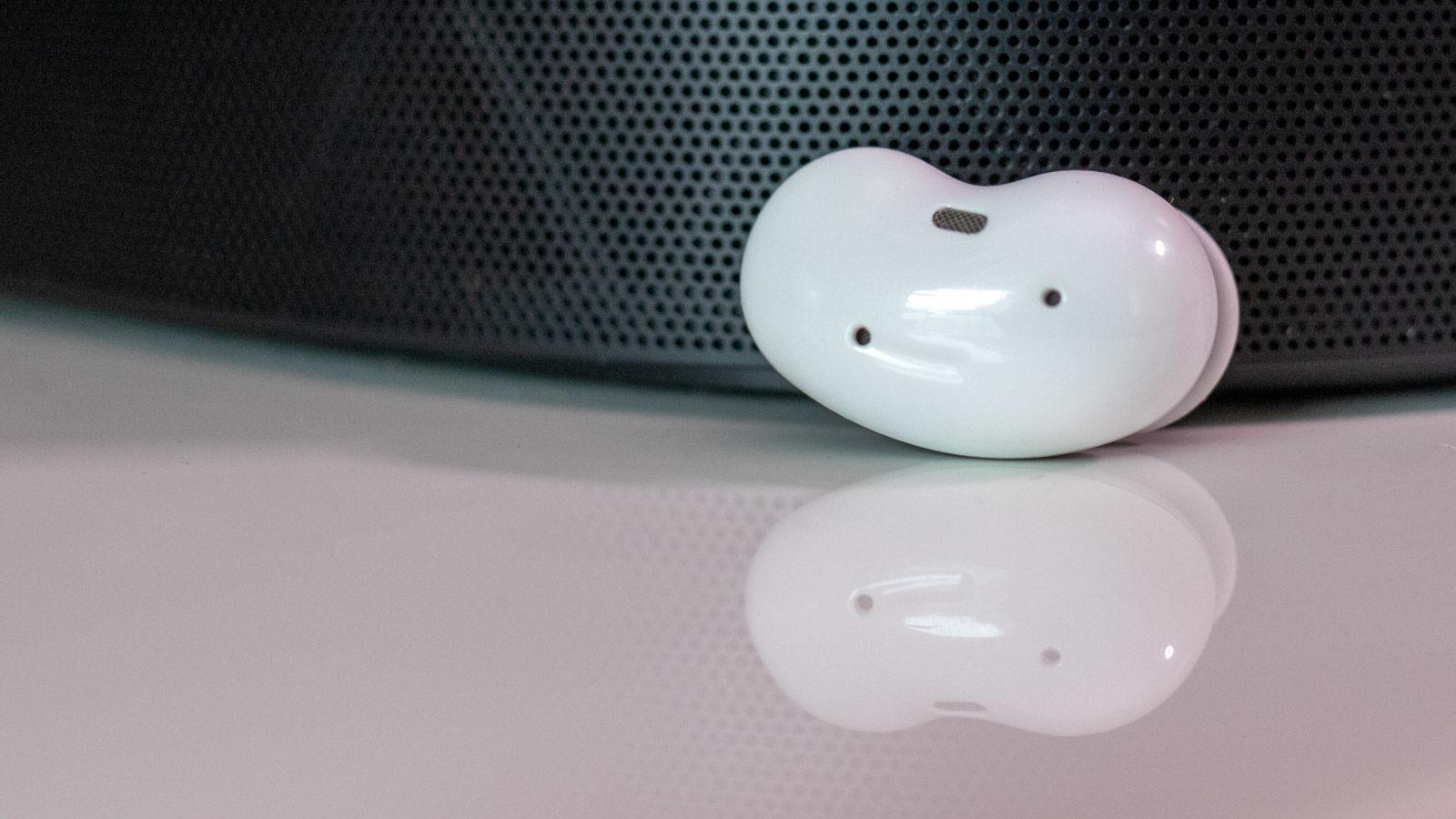 The curved, rounded design is meant to fit snugly into the outer part of your ear, combining the best elements of both schools of earbud designs: there’s nothing left sticking out or dangling down, but equally they sit comfortably without placing any pressure on your ear canal.

They may look a little odd outside the case, but they’re surprisingly sleek and stylish when worn – I’m surprised to admit that, aesthetically at least, these are now among my favourite earbuds out there. I’ve been testing them out in ‘Mystic White’, but they’re also available in black, bronze, and blue if those are more your vibe. My only mild niggle here is that I think the glossy, reflective plastic Samsung uses looks a little cheap – I’d love to see a pair of these in a matt finish.

The speakers are based at the bottom of the buds, and will nestle comfortably into your ear, without needing to actually be inserted into the ear canal. A silicone pad at the top of the bud is then what holds it in place. Samsung only provides two size options here though. I found the larger size suited my ears well, but I do worry that with only two options some people might be caught out with no good fit. 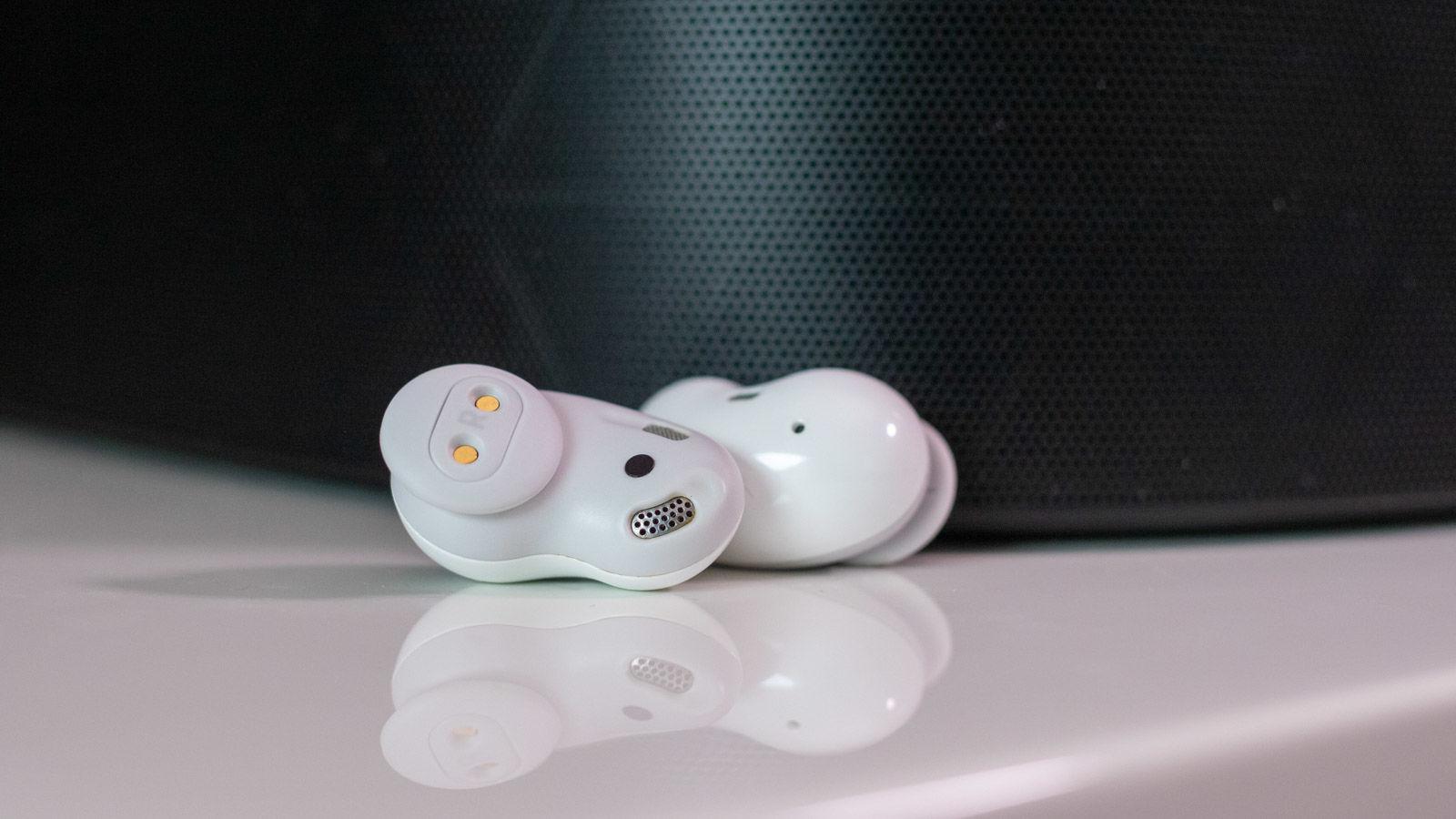 They look like they won’t be stable, but they do hold up pretty well. I’d be sceptical about taking them out on a run or other exercise, but for day-to-day usage you don’t really need to worry about them falling out. And one perk of the design is that because no part of the Buds Live stick out of your ears, there’s nothing to knock or catch on bag straps or jackets.

So what’s the downside of the design? Well, compared to the likes of AirPods, nothing – these are a clear improvement in most respects. But earbuds with silicone tips offer a snugger fit and, as a result, will block out much more external noise. More on that later. 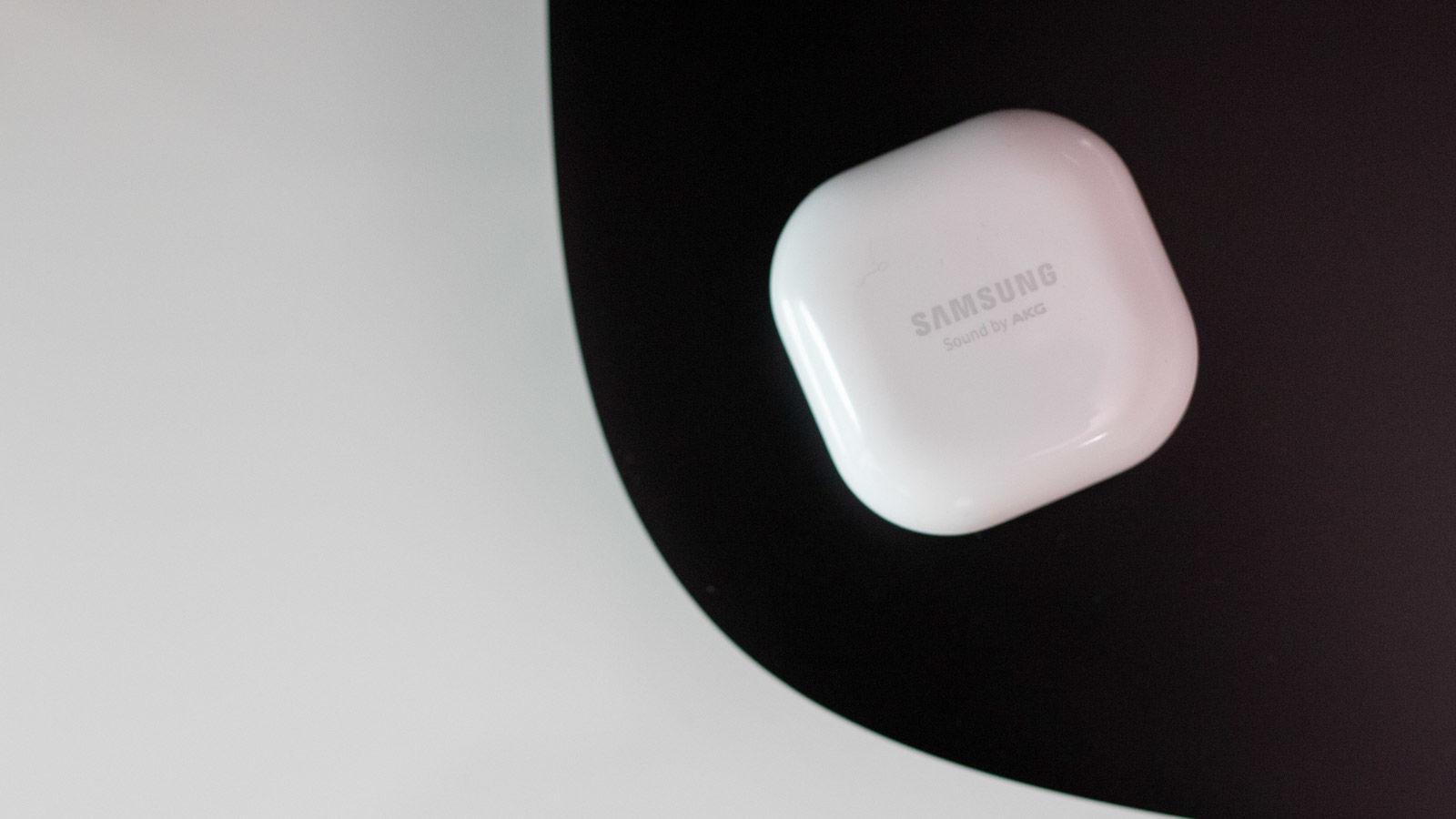 As with all true wireless earbuds, the Buds Live ship with a portable battery case. This is one of the smaller battery cases I’ve seen yet – another perk of the flat design of the buds themselves, I suspect – with a compact square design that’s easily pocketable.

Audio quality is one area where I can’t really fault the Buds Live, especially at this price. Tuned by the Samsung-owned audio brand AKG, the Buds Live are capable of delivering unexpectedly robust audio.

The open design contributes to an expansive soundstage that leaves space for every instrument to stand out. Crisp mids and trebles leave the Buds Live best suited to pop and rock, but the bass will hold its own if you really need it to – just don’t expect anything earth-shattering if you listen to a lot of hip hop or house. 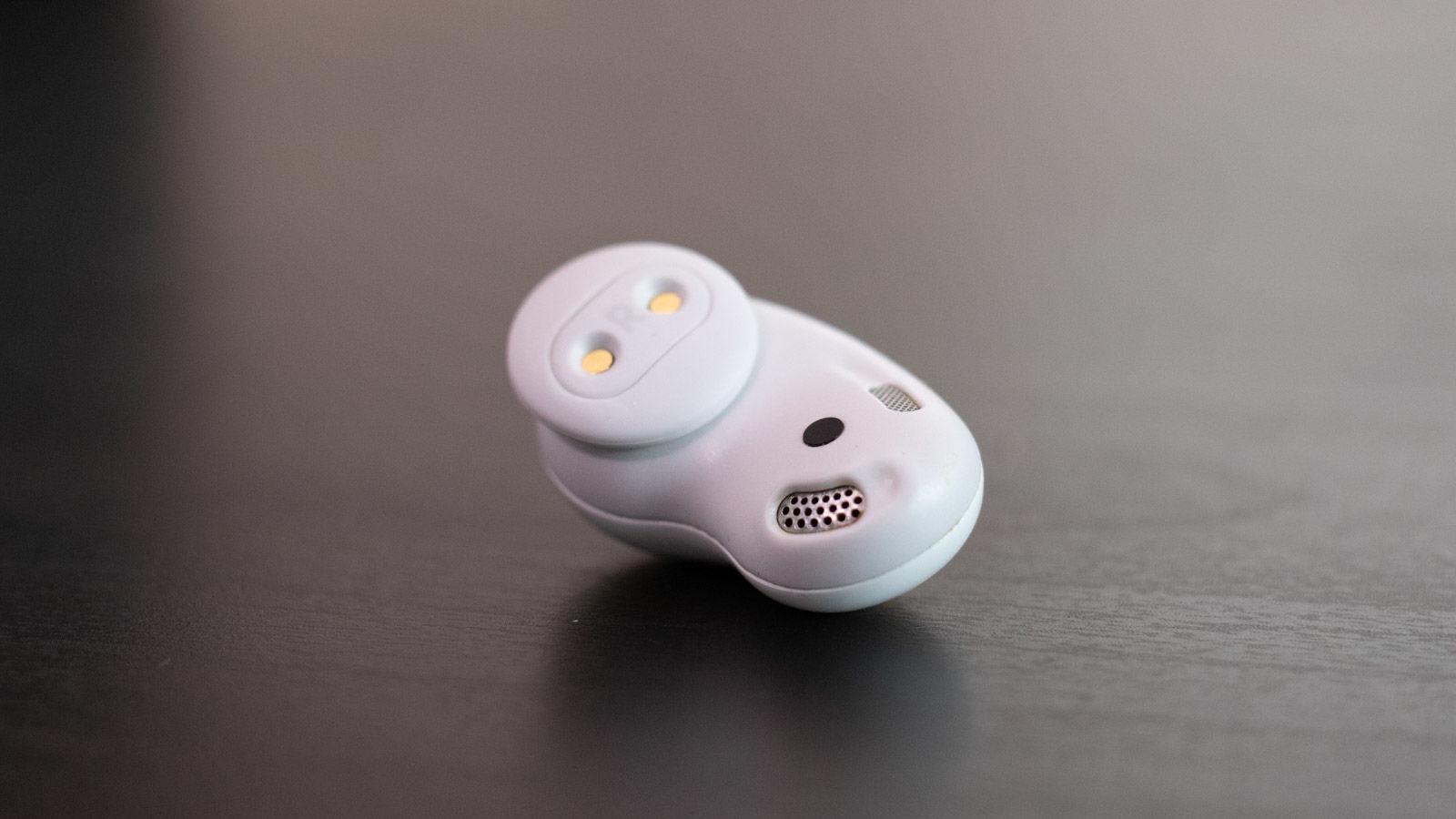 I’ve already said that the open design leaves plenty of noise leak, and you will hear a lot of the outside world creeping in while you listen. Samsung has done its best to combat this with active noise-cancelling, with mixed results.

The ANC here is pretty decent at tuning at persistent noises – the hum of a fan, the rattle of a train – but can’t keep up with less consistent interruptions. To be fair, that essentially suits Samsung’s pitch: you can tune out enough of the world to stop it getting in the way of your music, without blocking out the things you might want to hear, like traffic or someone trying to talk to you.

If you’re really looking for total isolation these will not deliver it. Few true wireless buds will, to be fair, but the Sony WF-1000XM3 buds are your best bet, with the AirPods Pro probably coming in second. But if you’d rather stay aware of your surroundings while still drowning out the worst offenders, the Buds Live aren’t bad.

Controls are handled by touch, with the entire outer surface of each bud being touch-sensitive. That makes the touch controls a little too easy to activate – you better hope you get a good fit, because any attempt to adjust the buds’ position is almost certain to pause your music or skip a track whether you like it or not. Then at other times when trying to hit the controls I’d get no response at all, which is just as irritating in the opposite direction. 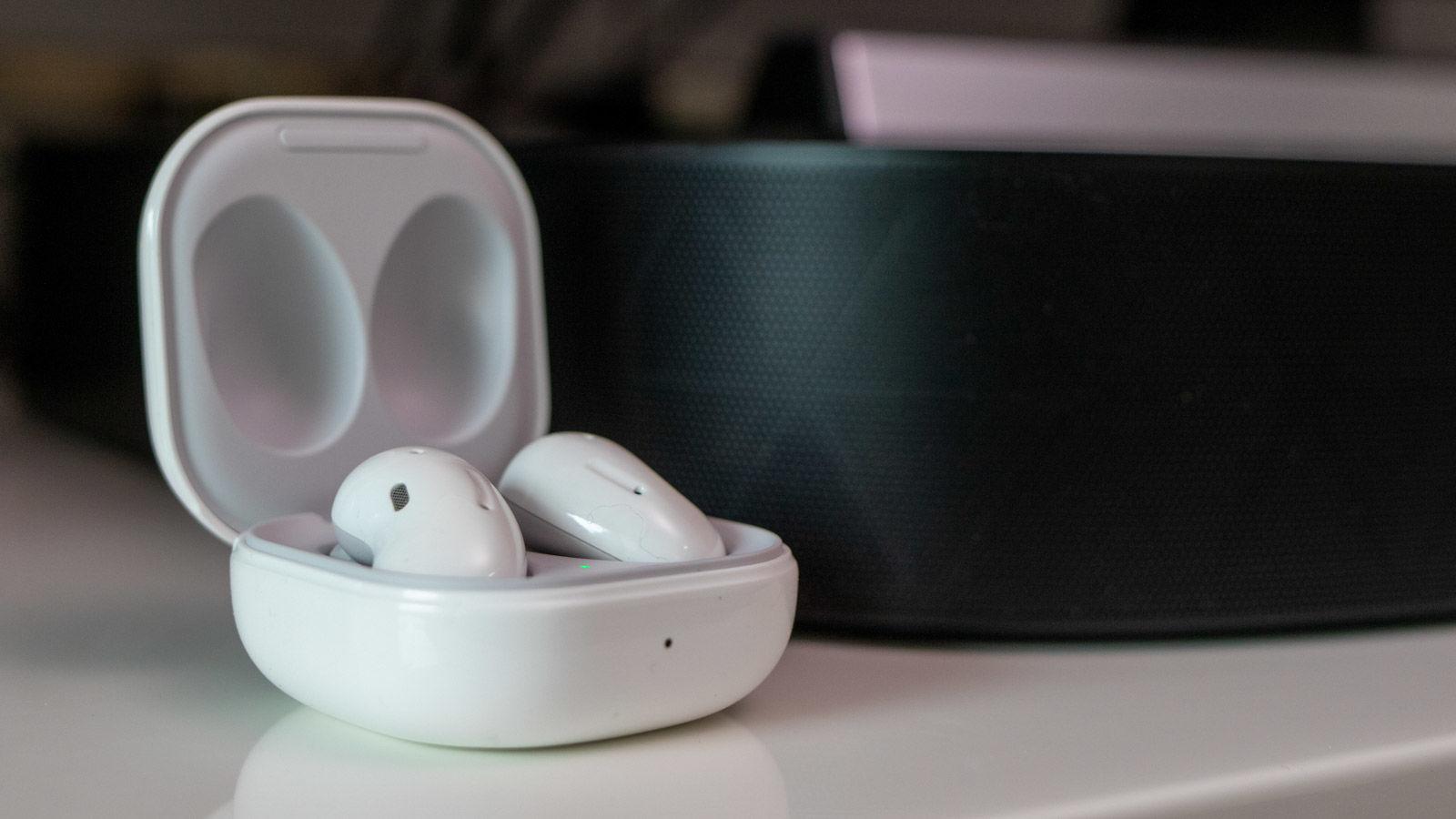 Controls and other settings can be customised in the official Samsung app, which is available on any Android phones and now iOS too, making the Buds Live a solid choice whether you’re a Galaxy phone owner or not.

Fast pairing will help you connect the Buds Live a little quicker to a Samsung phone, though the tech is also there for Windows PCs now. Samsung owners will also be able to connect two pairs of Buds Live to one phone to share audio, but I can’t imagine many people will find themselves making use of that.

The only other Samsung-specific perk is the option to use the Buds Live’s microphones as your audio source when recording video with the Note 20 Ultra, but I haven’t been able to test that myself anyway. 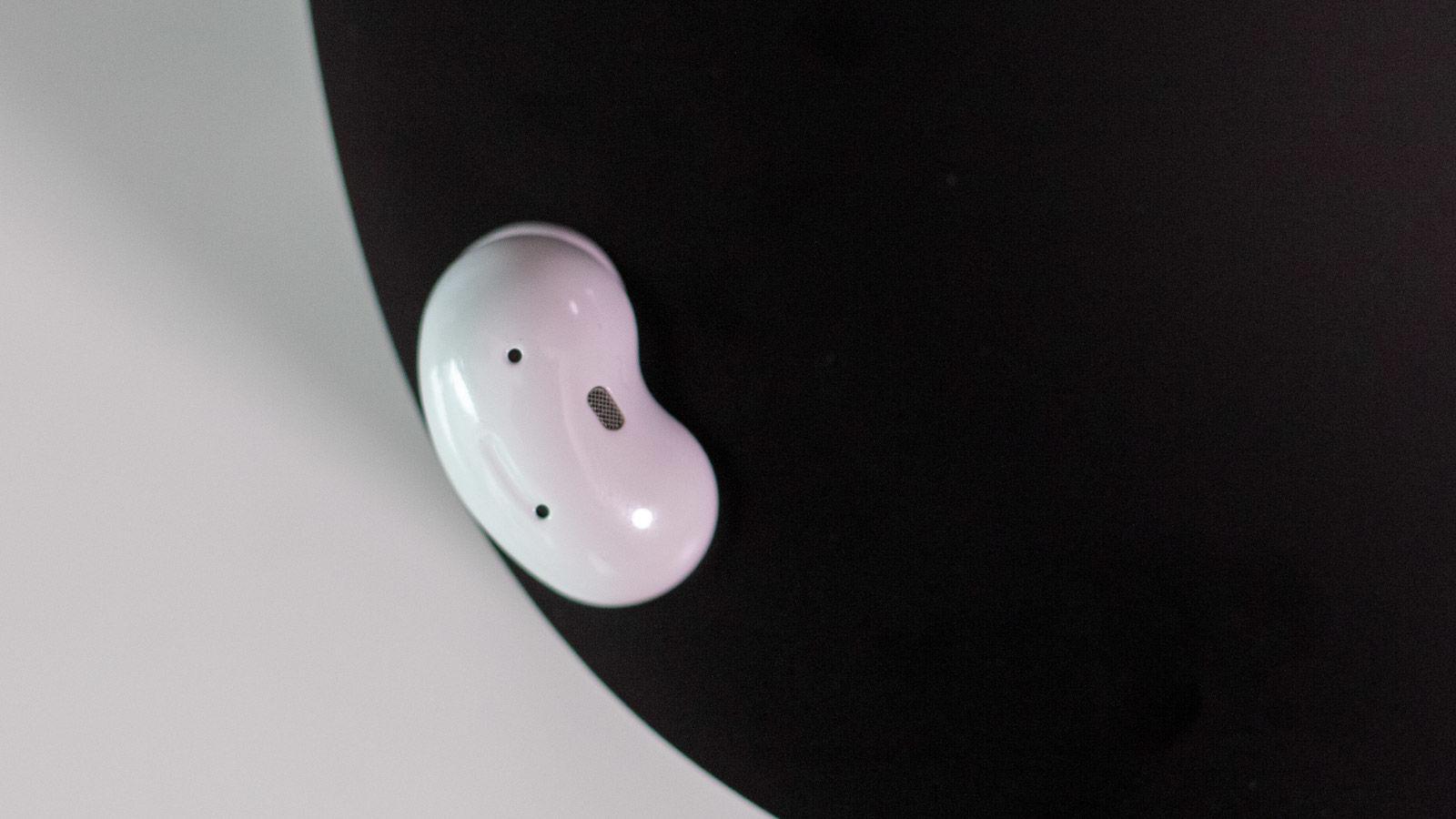 The microphones aren’t bad otherwise, with decent call quality and some noise-cancelling on your voice. It’s nothing special, but I had no complaints about call quality while testing the Buds Live, and people should be able to hear you well enough in most environments.

Samsung quotes a battery time of six hours from the Buds Live, with a total of 21 hours once you include the case.

Bear in mind that this will drop a little once you factor in the ANC, which I tended to leave on most of the time. With ANC active I found the Buds Live would last four or five hours – not bad if you’ll mostly be using them out and about or for your commute, but you might not want to rely on them for a long journey. 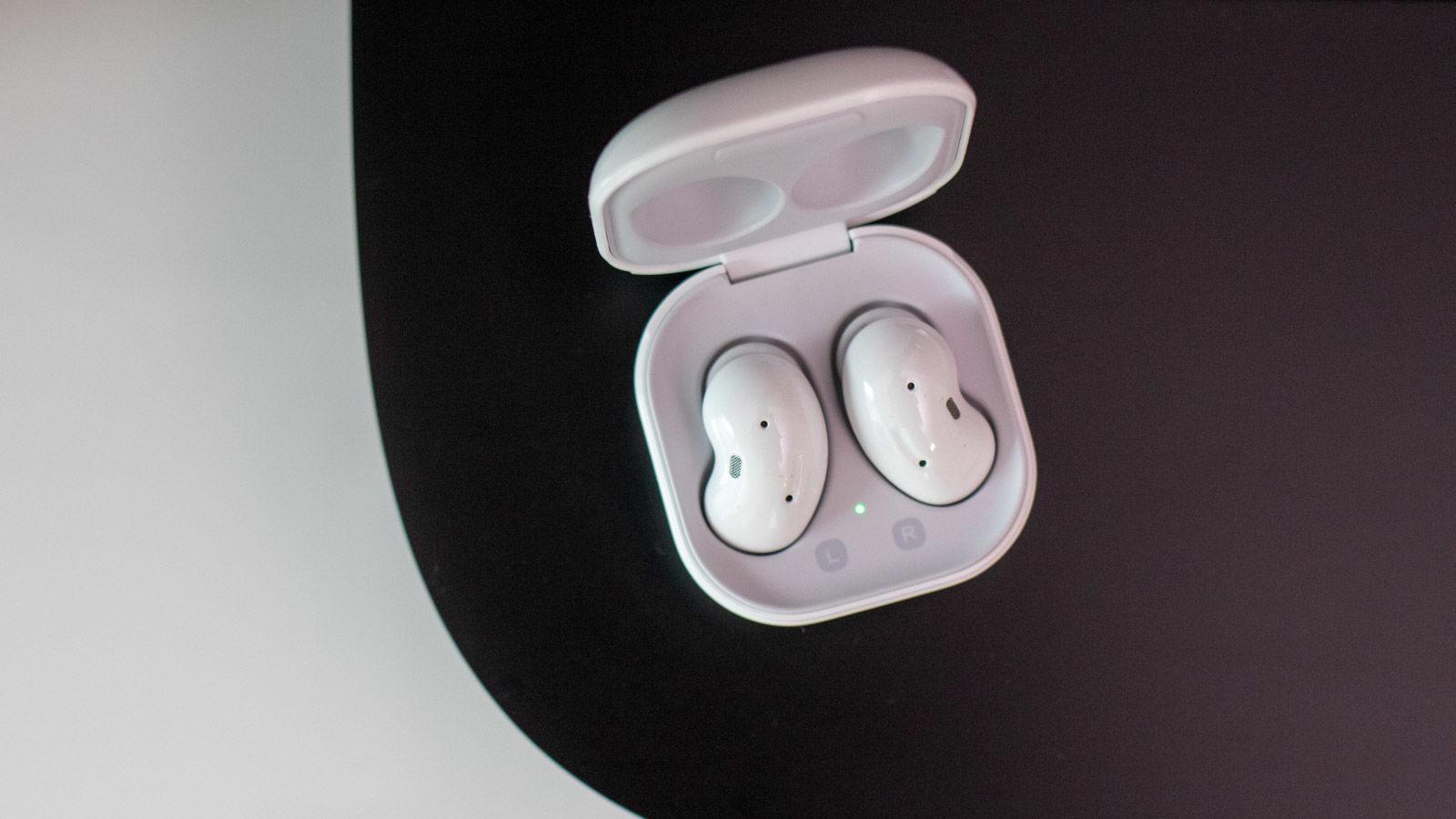 The lower battery life on the buds themselves is a shame after the whopping 11 hours delivered by the Galaxy Buds+ earlier this year – still my preferred Galaxy headphones – bringing these back in line with the competition for the most part. There’s longer battery life in the case here though, which for many will be the more important element.

It helps at least that there’s wireless charging to supplement the USB-C port, so as long as you have a wireless charger – or a phone with reverse charging – you can top the case itself up pretty conveniently.

A pair of colour-changing LEDs on the case indicate battery life of the case and buds, with red, yellow, and green to give you a (very) rough idea of how much life is left in them.

The Galaxy Buds Live are out now for £179/$169. You can grab them directly from Samsung or most third-party retailers, including Amazon. 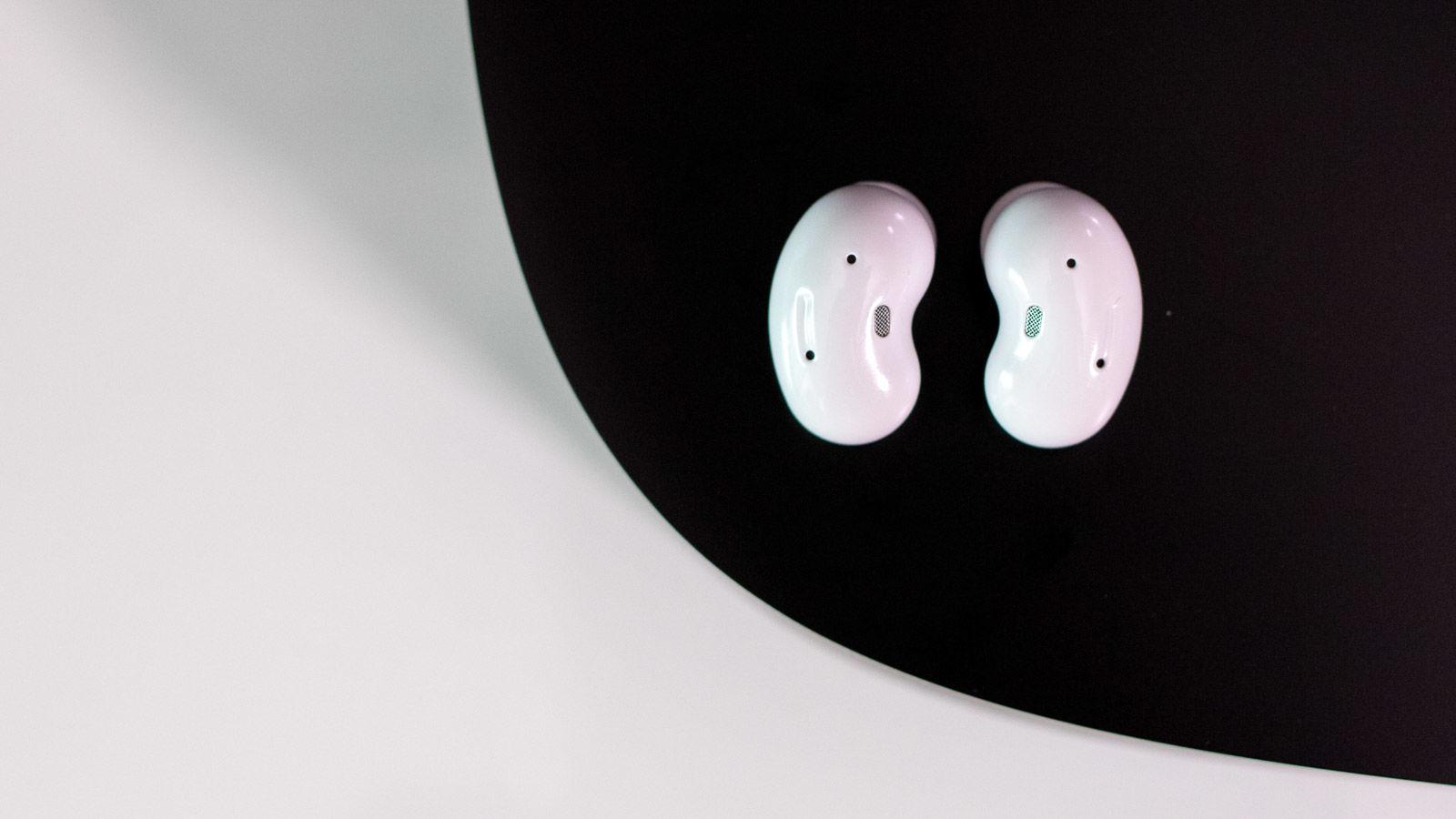 That makes them significantly cheaper than Apple’s £249/$249 AirPods Pro, though if you know you’re set on noise-cancelling you might be better off with the Sony WF-1000XM3, which are officially £219/$229 but now available for a similar price to the Buds Live from most retailers.

The other odd comparison is Samsung’s own Galaxy Buds+. These have now dropped to £159/$119, but will likely suit most people better. They have similar audio quality, and while there’s no ANC the passive noise isolation will actually deliver similar results. Throw in the much better battery on the buds and the lower price, and I know I’d pick the Buds+ any day.

Samsung deserves credit for taking the risk on a weird new design with the Buds Live, not least because for the most part these deliver on their promise. They’re extremely comfortable, surprisingly stable, and honestly after a while you do sort of forget the whole beans bit.

Audio quality is strong, but don’t get drawn in by the promise of active noise cancellation: the tech is here, but for the most part it’s just playing catch-up to make up for the complete lack of passive noise blocking.