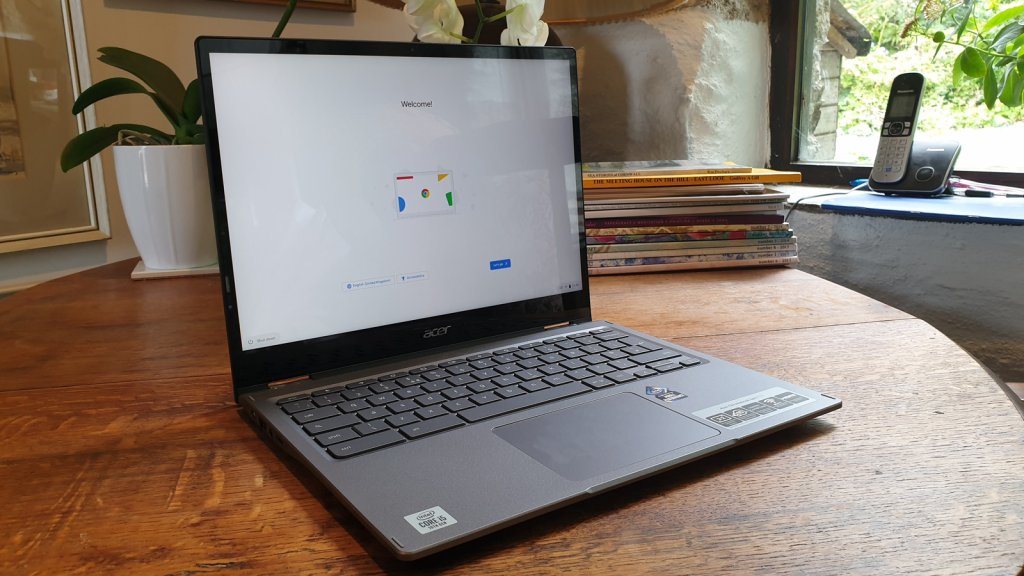 Acer has hit upon a winning formula with its latest Chromebook offering. The Spin 713 marries excellent components, powerful performance, that 3:2 display and futureproof connectivity with a sensible price.

Acer is a company that has consistently supported the Chromebook platform and over the years it’s released some excellent models.

Now, a new mid-to-high-end version has arrived, with a taller display, Intel Core processors and bang-up-to-date Wi-Fi connectivity. I take a look at the Spin 713 to see if all that practice has made perfect.

I’ve tested the top-end Core i5 model but you can also get the 713 in Core i3 and Pentium Gold SKUs.

The initial aesthetic of the Spin 713 is that of a business laptop, mainly due to the minimalistic silvery grey livery and bevelled lid edges that lend it a premium quality.

Running a hand along the sides of the device reveals slight curvatures that go inwards once past the ports, but the most obvious difference to standard Chromebooks (or indeed most laptops) is the taller nature of the metal chassis.

Two thick hinges support the ability to fold the display back through 360 degrees, all of which is made more useful due to the touch screen capabilities.

So, if you want a makeshift tablet, the Spin 713 can do that so long as you don’t want to hold it for too long, as the 1.37kg/3lb weight makes it a bit of a handful. You can also prop it in other orientations when you only need to use the screen.

Corning Gorilla Glass also means that the screen should endure continued use without picking up chips or scratches.

There’s a decent island-style, backlit keyboard on the Spin 713, albeit one that feels a little hollow when typing with any passion on your lap. It’s not chassis flex, as everything feels robust, just a slightly empty feel at times.

Existential quandaries aside, the keys are accurate and provide a comfortable platform for long typing sessions, especially when used on a desk or table.

This is accompanied by a solid and responsive trackpad, as we’ve come to expect with Chromebooks in general.

ChromeOS supports a range of multi-touch gestures now, so you can swipe through open tabs, quickly view all open apps on the device, plus zoom in and out all from the trackpad.

What is that? Well, instead of a widescreen layout that’s great for watching video content but a little squat for working on documents or browsing the web, the vertical axis of this display is higher, meaning you see more content on the screen.

This isn’t a new idea, as Google has been using the layout on all of its premium Chromebooks, going back to the Chromebook Pixel and maintained up to the recent Pixelbook (although sadly missing on the Pixelbook Go).

The display here offers a resolution of 2256 x 1504, with a lovely IPS panel that renders crisp text and gorgeous graphics with rich, but not oversaturated, colours. I like the increased real-estate offered by the 3:2 ratio and wonder what’s taking other manufacturers so long to adopt the format?

For websites, it seems a natural fit, and working on documents (such as this review) definitely benefits from the taller layout. Yes, if you spend the majority of your time streaming movies on your laptop then you might not enjoy the increased letterboxing effect, but for all other uses, it’s a winner.

The only downside is that it can be quite reflective, so if you plan to use it out in the garden when the sun is shining, you may need to find a bit of shade. If you do, the impressive 550 nits of brightness will give you enough illumination to get things done.

A touch screen comes as standard, and while many may question why you need one on a Chromebook, it comes in surprisingly handy when navigating websites and playing games.

Sound is channelled through twin downward-firing speakers fitted under the palm rest area, which produce good audio with a maximum volume that can fill a small room all while keeping separation and balance between frequencies.

You’re not going to hold a drum ‘n’ bass party with this as your PA, but I admit that seems a niche activity for a device like this.

Acer keeps up the long-held tradition of equipping Chromebooks with an impressive array of ports, as the Spin 713 boasts HDMI, 2x USB-C, USB 3.0, microSD and the good old headphone jack. Not bad at all.

Various stickers adorning the palm rests let you know that this is a device that comes with an Intel processor, as does the occasional fan-noise.

There are two variants available, a 10th generation 2.1GHz Core i3-1011OU with and a 1.6GHz Core i5-1021OU, with the latter installed on our test machine. Acer has since released a Pentium Gold model available via Amazon.

It’s a decent spec for a Chromebook, which traditionally don’t come with powerful chips due to the fact that it’s unlikely that users will require that much oomph as they won’t be doing video-editing or graphically demanding tasks.

Of course, you won’t be doing much of that, even with these processors, but you will enjoy the fast and fluid nature of the Spin 713, which runs apps easily and without any noticeable slowdown even when there are several windows open with tasks running in the background.

Putting the Chromebook through a range of benchmarks tests returned scores of 112.5 on Jetstream, 722.11 for Basemark 3.0, and using the Android app Geekbench 5 I saw a single-core score of 972 while the multi-core managed 3201.

All of these are very respectable metrics, making this one of the fastest Chromebooks we’ve tested.

A decent 8GB of DDR4 RAM helps keep things sprightly and we were pleasantly surprised to find 128GB of SSD storage available. This is more than usually offered on this type of device, with the standard capacities often in the 32GB or 64GB range.

This can be extended further by the use of the microSD card slot, although at the time of writing we weren’t able to confirm the maximum size of card it can accept.

These specs put the Spin 713 directly in competition with Google’s own Pixelbook Go, but as the baseline model of that machine sports an Intel m3 processor you’ll need to move up in power and price to the Intel i5 variant, which will set you back £829/$849.

Even then you’ll still find that it’s an 8th-generation chip rather than the 10th-generation in the Spin 713. So it seems that Acer has definitely got Google’s number with this device.

Wi-Fi 6 capabilities makes this a thoroughly modern laptop. If you’re not familiar with the new wireless standard, you can read our What is Wi-Fi 6? guide, but the thing you really need to know is that it is much faster than Wi-Fi 5 or 802.11ac as it’s also known.

Now, there is a caveat with this, as you’ll need a Wi-Fi 6 router to gain those speed boosts at home, otherwise it will utilise the normal 802.11ac speeds. Admittedly these are thin on the ground at the moment, but when it comes to future-proofing the Spin 713 is well equipped.

Other forms of connectivity are also up to snuff, as Bluetooth 5 means there should be strong and stable signals between the Chromebook and other accessories.

In our new post-Covid reality, webcams have become an essential part of any laptop. The 720p camera here is acceptable if not brilliant. In good light you’ll get a usable  likeness of yourself, albeit with the slight addition of grain, but in darker rooms the quality falls off rapidly.

This isn’t unusual, as even Apple MacBooks and high-end Windows machines often come with average cameras, but it still seems a shame when so much of the Acer Spin 713 is hitting above normal Chromebook standards.

On the box Acer claims a 10 hour battery life for the Spin 713, but our tests returned different results. Surprisingly, I got an increased amount of time rather than the usual shortfall that can happen when checking the accuracy of a manufacturer’s claims.

In our standard test, where we stream continuous HD video with screen brightness at around 60% and sound at around 50%, the device kept going for an impressive 11 hours and 10 minutes.

This means that the Spin 713 should have enough power to last most people’s working day and still have enough left in the tank for watching Netflix on the way home.

ChromeOS is now a fully-fledged operating system, with plenty of capabilities for the general user. While it remains a primarily internet-focussed experience, you can run a number of apps offline as well as most Android apps.

I’ve alway liked it’s simplicity and ease of use (if you’re familiar with the Chrome browser then you’re going to take to ChromeOS in an instant), plus the format makes working from home or using the device for more than just streaming and social media a better experience than on a tablet.

If you’re reliant on particular apps on your existing machine, it’s best to check whether they have equivalents on a Chomebook as the device can’t run Windows or macOS software, but usually there is even if it’s an online web version.

One of the prime advantages of using Chromebooks is that you don’t really have to worry about viruses, not to mention that they are great for technophobes in your family for whom you usually end up providing IT support.

Both of which are now available to purchase from Argos, Currys PC World, Insight and Box. You can also get a Pentium Gold powered model exclusively from Amazon.

US customers have more options, with the following models now available;

View them all at Acer and check our best Chromebook chart to see what else is available.

Laptops have seen an increase in price over the past couple of years and Chromebooks are no exception.

The idea of paying the best part of £700/US$700 for a device of this type (other than Google’s flagship examples) only a short while ago would have seemed like a hard idea to sell.

Now, as ChromeOS matures and good Windows laptops often are found above the £1,000/US$1,000 mark, it seems that Acer has put together a very enticing proposition.

The build quality is good, the components and connectivity are excellent, but the star of the show is the display with its touchscreen capabilities and 3:2 ratio.

This is the format that we’d like to see adopted universally by Chromebook manufacturers, and it also means that with the Spin 713 Acer has now set the standard.