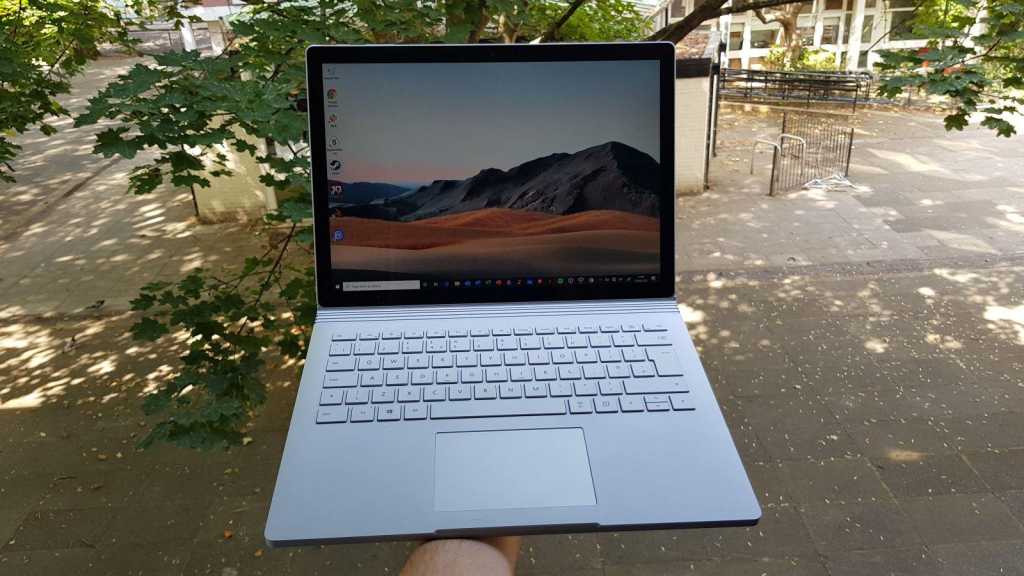 The Surface Book is a minor upgrade over its predecessor, and some clear shortcomings mean it’s starting to look a bit dated when compared to the competition.

The original Surface Book was released back in 2015, at a time when Microsoft’s range of computers was rapidly expanding.

While there was a two-year gap between the first two generations, we’ve had to wait a little longer for the Surface Book 3 to arrive.

While there are few aesthetic changes of note, various upgrades under the hood make it the most powerful laptop that Microsoft has ever made. But is it able to justify that high price tag?

The Surface Book 3 is a classic example of prioritising function over form. It’s not unattractive per se, but its industrial design certainly won’t be for everyone. That’s emphasised by the single silver colour option, which only draws attention to this more imposing look.

Nonetheless, the most noticeable design element is the so-called ‘fulcrum hinge’, which has been an ever-present on the Surface Book line since it launched. The design of the hinge means it can comfortably support the weight of a heavy screen, while at the same time ensuring there are no accidental presses of the touchscreen while typing. It’s also a surefire way for the Book 3 to stand out from the competition.

Speaking of typing, the keyboard is undoubtedly one of the highlights of the Surface Book 3. On the 15in model I tested, it offers a truly excellent typing experience, with the tactile, responsive keys offering an excellent amount of travel. It’s among the most impressive laptop keyboards I’ve tried, and it doesn’t feel like you’re losing out on much when compared to the full desktop experience.

Below the keyboard is a similarly impressive trackpad. While the Book 3 is compatible with the Surface Mouse or any other Bluetooth mouse, I was more than content to use it to navigate around the device. Its large surface area doesn’t come at a cost to comfort though, with there still being plenty of room to rest your hands.

However, as you may have noticed from some of the photos, there’s no fingerprint scanner on the Surface Book 3. While Windows Hello offers a quick and effective alternative method for unlocking your device, there’s no logical reason why both couldn’t be included. At this price point, it’s a strange omission that’s hard to excuse.

The face unlock is made possible by a 5Mp front-facing camera, which is capable of Full 1080p video. It offers a decent level of detail that is superior to what you’ll find on most built-in webcams but seriously struggles in low lighting conditions.

The 8Mp rear camera adds autofocus, but it’s only worth using for document scanning or points or visual reminders. While it’s rare to see a rear camera on a laptop, this doesn’t mean you should use it for any serious photography!

The Book 3 is relatively well-stocked by ports, with 2 USB-A, 1 USB-C a headphone jack and full-size SD card slot. The latter makes a lot of sense when you consider the device’s target market, with many photographers and filmmakers want to seamlessly move files between camera equipment and their PC.

These ports are split between the keyboard and screen, to allow for full functionality when in tablet mode. This means there are two separate Surface Connect ports, as Microsoft continues to stubbornly stick with its proprietary charging method.

The top of the screen is where you’ll also find the power button, as well as a dedicated volume rocker. However, having to position the speakers on the side does mean sound quality suffers. They offer great clarity for voices, but the volume and bass are lacking when it comes to music. For anything more than casual use, I’d recommend taking advantage of the Bluetooth 5.0 to connect some wireless headphones.

The Book 3 is compatible with accessories, including the Surface Pen and Surface Dial, but I wasn’t able to test them so can’t comment on their effectiveness.

The Surface Book 3 is among the sturdiest 2-in-1s on the market, and it’s far from obvious that the screen is detachable at all. The detach and you’ll be prompted to remove the screen from its base.

While it suffers from the same software limitations as other Windows tablets, the experience in tablet mode is a lot more intuitive for touch input. The fact that Microsoft’s most powerful laptop ever can also be a tablet is hugely impressive, although there are some limitations on what it can do.

If you’re using the Book 3 for a task which requires the device’s full processing power, such as video editing or graphics-intensive gaming, it will not allow you to detach the screen. That’s because the device requires the processing power located under the keyboard to function effectively. However, it’s not too much hassle, and you quickly realise what you can and can’t do with the screen detached.

That includes holding it in one hand for an extended period, with most of the 1.9kg total weight being within the tablet. That makes it a little cumbersome to use, so it’s clear that this is a useful alternative as opposed to a genuine everyday use case.

The Surface Book 3’s screen is excellent regardless of which model you choose, although the resolution does very slightly. The 15in model I tested comes with a 3240×2140 ‘PixelSense’ display, while the 13.5in version is a minor step down, at a resolution of 3000×2000.

Neither are full 4K, but it’s unlikely you’ll notice a difference on screens of this size. What you will be aware of is excellent detail and rich colours that the display offers. I also recorded an impressive 340 nits of brightness with the SpyderX Pro, meaning it can handle direct sunlight without too much issue.

If the resolution didn’t give it away, the Book 3 also retains the 3:2 aspect ratio which is becoming increasingly common across the Surface range. This gives it a boxier feel than the traditional 16:9, which will take some adjusting to if you’ve not tried it before.

However, the lack of changes does mean that the Surface Book 3 is still sporting sizeable bezels. The desire for bezel-less laptops is nothing like the same as on smartphones, but the Surface Pro X has proven that Microsoft could go further in this regard. It’s by no means a dealbreaker, but another compromise you’ll have to be content with.

The Surface Book has championed the latest Intel Core processors since it first launched at that’s no different here. You get a choice of i5 or i7 processors on the 13.5in model, but there are only i7 variants of the 15in version. How well it performs will vary greatly depending on the amount of RAM that you choose to pair with it.

I can only comment on the 15in, 16GB model I tested, which will set you back more than £2,199 in the UK. Performance on most tasks is solid, with the Book 3 able to manage multiple open windows and multitasking without a hitch.

However, despite Microsoft specifically promoting the Book 3’s suitability for “immersive gaming”, that proved to be its main weakness. Far Cry New Dawn is undoubtedly a graphically intensive title, but even the Nvidia GTX 1660 wasn’t up to the task. Even when set to maximise performance, the game lagged throughout my testing, to the extent that it wasn’t at all enjoyable to play. I’m sure it would be fine for more casual games, but those serious about gaming on a laptop should look elsewhere.

Nonetheless, in terms of benchmarks, the Surface Book 3 is more than a match for the best laptops on the market.

Although not always the most accurate indicator of real-world performance, it shows just how well the Book 3 performs in nearly all circumstances. This makes the device’s shortcomings in gaming performance even more frustrating.

It doesn’t quite merit its own section, but it’s worth adding that the Surface Book 3 comes running Windows 10 Home out of the box. Considering Microsoft develops Windows, there are no software tweaks to report, and Surface devices don’t seem to be prioritised when it comes to OS updates.

The Surface Book 3 has two batteries, with an estimated 22Wh in the tablet 63Wh in the base combining for a total capacity of around 85Wh. Microsoft claims this will get you around 17.5 hours of usage when the two are connected.

Its performance in our 720p video loop test suggests it falls well short. With the brightness set to around 120 nits via the SpyderX Pro, I recorded 9 hours and 13 minutes before the device put itself to sleep.

While a video might not be typical of everyday usage, I was still struggling to get through a full 8-hour workday without reaching for the charger.

As was mentioned previously, there’s a Surface Connect port in both the base and the screen, which makes for a confusing experience. Technically, the device only charged 15% in 30 minutes from off using the 125W adapter, although the tablet’s battery charged 30% and the one in the keyboard by 11%. Make of that what you will!

As I’ve alluded to in previous sections, the Surface Book 3 doesn’t come cheap.

Even the most expensive entries in our best laptop chart can undercut it on price, and many of those devices offer more of what the everyday consumer is looking for.

The Book 3 might not have mainstream appeal, that high price tag is hard to justify for most people.

Despite sporting only minimal upgrades, the Book 3 is another solid addition to the Microsoft Surface family.

However, performance is seriously mixed. The Book 3 copes just fine in most situations but is a serious letdown when it comes to gaming performance. That wouldn’t usually be much of an issue, but Microsoft has specifically advertised its suitability for gaming.

That’s far from the only drawback, with chunky bezels, mediocre speakers and lack of fingerprint scanner among the most prominent.

At this price point, these shortcomings are hard to look beyond.