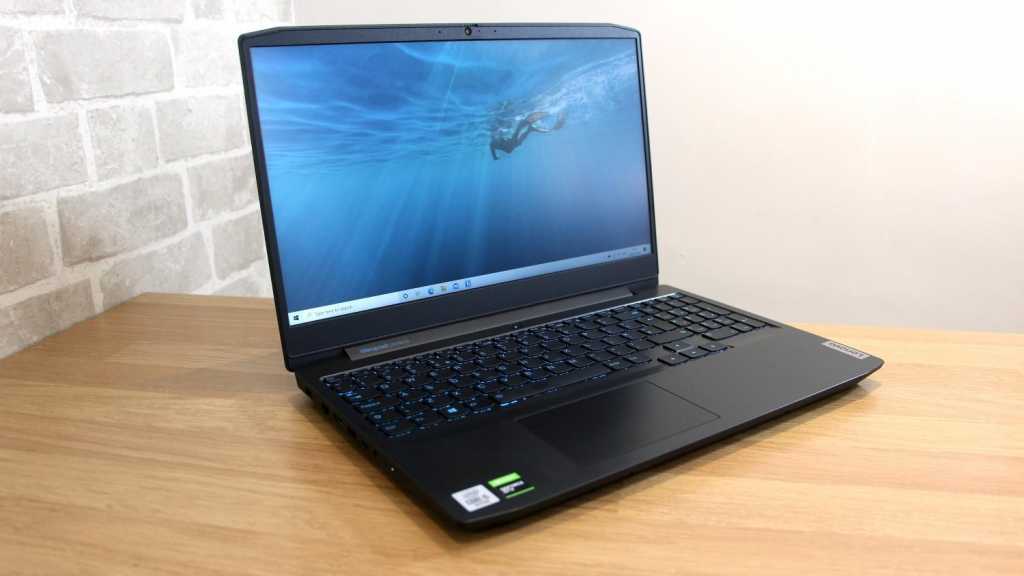 If you want a gaming laptop on the cheap, the Lenovo IdeaPad Gaming 3i is affordable and has enough power for mainstream gaming, eSports and computing. It’s even 120Hz but the screen is washed out and there are some other compromises to consider.

The Lenovo IdeaPad Gaming 3i is one of the most affordable gaming laptops you can buy anywhere thanks to a bargain-basement price of £699/US$719. That’s certainly low enough to prove tempting, but at this level there’s always a danger that too much has been compromised to meet the budget.

If that’s the kind of money you have to spend on a gaming laptop, here’s what you can get for your cash.

Happily, the Lenovo looks good so we’re off to a good start. The matt black exterior is made from plastic, and the lid is enhanced at the corners with subtle angled sections. On the inside, the attractive blue backlight is paired with a smart logo finished in the same shade.

The IdeaPad Gaming 3i is easily the match of pricier portables aesthetically, but hands-on time reveals weaknesses. The screen flexes too much and the base section has too much movement in its material.

It’s strong enough to be taken out of the house, but it’s worth bearing in mind. It’s not particularly slim and light either, with a 25mm body that weighs 2.2kg. At this part of the market, those are entirely ordinary measurements though.

The Lenovo has two USB 3.2 Gen 1 ports and a Type-C connection, but the former ports don’t support the faster USB 3.2 Gen 2 standard and the latter doesn’t handle DisplayPort or Thunderbolt.

Another full-size USB port would have been welcome, too – plug in a mouse and an external hard drive and you’re almost out of options so a USB-C hub might be a good idea. Elsewhere there’s an HDMI port and an audio jack but no SD card reader.

The IdeaPad Gaming 3i has Gigabit Ethernet and dual-band 802.11ac wireless, but no Wi-Fi 6. It’s got a 720p webcam with a privacy shield, but there’s no Windows Hello login support and the image quality is underwhelming.

On the inside, you’ll find a spare memory slot and a vacant NVMe connector. The latter can only be used if you remove the 2.5in bay, which is redundant because it has no SATA connector.

Lenovo has a hard-earned reputation for good keyboards, partly thanks to its ThinkPad range, and the IdeaPad doesn’t disappoint. The keys have reasonable travel and a good typing action – it’s fast and consistent, with a noticeable point of actuation. The keyboard is fast and crisp – certainly snappier than the typing units included on most gaming laptops, especially at this price.

The action is easily good enough for mainstream gaming and for long typing sessions. There are only minor downsides: the numberpad is a little narrow, and the backlight is only blue.

The trackpad is disappointing. Its buttons are too soft – they’re not crisp enough for fast-paced gameplay. The pad is also installed on the left of the machine, which makes it awkward to alongside the WASD keys. A USB gaming mouse would be far better, of course.

The Full HD IPS display has a 120Hz refresh rate, but without Nvidia G-Sync. That’s fine for a machine like this: the resolution is ideal, and the refresh rate is high enough to deliver smooth motion in single-player games and mainstream esports titles.

You’ll only want to move to 144Hz or beyond if you play particularly fast-paced games or if you’re a keen esports player. If that’s the case, you’ll need a more powerful GPU – and that will involve spending at least £900 or $900.

The IdeaPad Gaming 3i’s brightness level of 314 nits is good enough for indoor use, but not outside. The black level of 0.23 nits is decent. Those figures create a contrast ratio of 1,356:1, which is good for an IPS display – it helps darker areas deliver proper depth, and there’s good nuance throughout.

The contrast is undermined by colour figures, though. The colour temperature of 7,015K is cool and the Delta E of 5.74 is poor. The Lenovo’s panel also only rendered a measly 56% of the sRGB colour gamut, which is extremely low.

The panel can’t display many of the shades needed to provide a vibrant experience – which means the colours look washed-out and lifeless. The display can still be used for mainstream gaming and media, but it lacks punch, even when compared to other screens in this price range.

The speakers are mediocre, too – they’ve got reasonable mid-range clarity, but there’s no bass, so the Lenovo’s audio lacks depth. Get a gaming headset if you’re serious about gaming.

The IdeaPad Gaming 3i is underpinned by a GeForce GTX 1650 – an entry-level Nvidia graphics card with a modest 4GB of memory, 896 stream processors and no Ray-Tracing.

The Intel Core i5-10300H is a mid-range CPU with four multi-threaded cores, a base speed of 2.5GHz and a Turbo peak of 4.5GHz. It uses the Comet Lake architecture, but there’s little difference between this CPU and the Core i5-9300H used inside older machines.

The 256GB Toshiba BG4 SSD delivered mid-range read and write speeds of 2,345MB/s and 1,522MB/s, which keeps the laptop responsive, but the drive isn’t capacious and there’s no secondary hard disk.

There’s 8GB of DDR4 memory, which is the bare minimum for a consumer laptop, and it’s only installed in single-channel configuration – so performance will be hindered.

Despite that, the GPU played Far Cry New Dawn and Wolfenstein at framerates beyond 30fps at Ultra settings. You’ll only have to tinker with settings in top single-player titles if you want them running at 60fps, or at faster framerates to properly make use of the 120Hz display.

The GTX 1650 has no issue with eSports – it’ll play any top title at triple-figure framerates.

There’s little difference between the Core i5-10300H and its predecessor, which is found in the Helios 300 – the newer chip was faster in Geekbench but a little slower in PC Mark 10.

Still, it’s enough power to handle day-to-day browsing, Office tasks and games – you won’t encounter issues until you try to run loads of apps at once, or tackle photo-editing.

More power is available elsewhere, though. Laptops with the AMD Ryzen 5 4600H are only around £100 or $100 more than the IdeaPad Gaming 3i, and that chip is ten thousand points faster in Geekbench. If you want a laptop that can handle tougher applications, it’s worth seeking out AMD silicon.

The Lenovo’s modest components mean this laptop is a solid thermal performer. Its peak CPU and GPU temperatures of 81 and 66 degrees are fine, and it’s quieter than most gaming laptops. The base panel does become a little warm after extended gaming, but it never gets hot enough to be uncomfortable.

This machine is middling when it comes to battery life. In our video playback test, it lasted for a decent six hours and 13 minutes, but in gaming, it barely managed 90 minutes.

That’s expected for an affordable laptop, and you’ll need to double the budget if you want better longevity.

The Lenovo reviewed here is the cheapest model available in the UK at just £699.

The cheapest version of the Lenovo IdeaPad Gaming 3i is the best – affordable, and with enough graphics power to handle mainstream single-player gaming and any esports title.

The CPU is good enough for daily use, and the Lenovo is quiet, with a good-looking chassis and a decent keyboard.

Just be aware that the IdeaPad’s price involves compromises. The screen is pallid, the trackpad is underwhelming, the port selection is a little limited, and the Lenovo is saddled with single-channel memory and a relatively small SSD.

These are pretty understandable at the price so if you’re on a tight budget, the Lenovo makes plenty of sense – it looks decent, it’s not disastrous in any particular area and it’s fast enough for everyday computing and gaming.