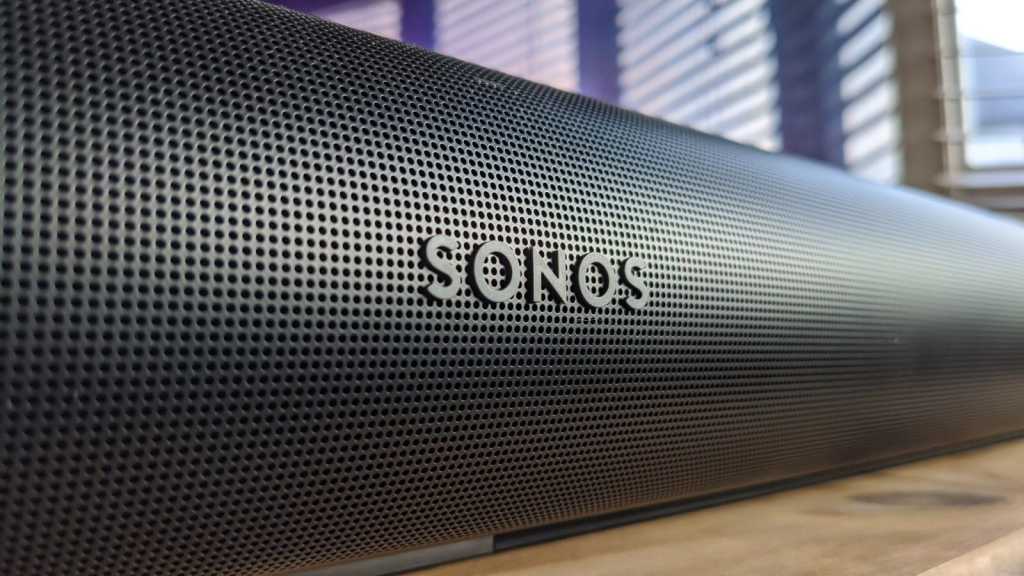 The Sonos Arc is easily one of the best soundbars money can buy with amazingly immersive sound and smart features. It’s only hampered by HDMI issues.

It’s taken a long long while, but Sonos has finally replaced its original soundbar, the Playbar, with a new model. The Arc is here with an impressive set of upgrades and new features which will surely tempt any potential buyer – if you can afford it anyway.

Sonos has, of course, released other soundbar products including the Playbase and the compact Beam. Both excellent in their own ways but the 2013 Playbar was overdue a successor so the Arc is a very welcome addition to the line-up.

The Playbar and Playbase have been discontinued so the Arc is now the flagship soundbar, while the Beam remains as a smaller and cheaper alternative.

At a glance, you wouldn’t particularly know the Arc is related to the Playbar but that’s not a problem. Although the fabric cover of the original is gone meaning the Arc has a harder finish, it does mean it’s easier to clean and will last longer.

The rectangle shape of the Playbar has been ditched for a more oval contour. It looks great, although in some ways I personally prefer the style of the Playbar.

The Arc has slightly concave ends behind which sit side-facing drivers. Being a modern Sonos product, there are touch-sensitive controls on top rather than physical buttons.

There’s a small section for ports at the back in the middle and a hidden LED sits above the Sonos logo on the front. The only other thing to note is the microphone icon and accompanying LED on the far right as, like the Beam, the Arc is a smart speaker too.

Although the Arc looks and feels great, it is rather large and quite heavy too. It’s mainly very long at over 1m so I would suggest measuring to see if you have space for it first. You can buy it in black or white.

Despite its heft, you can wall-mount the Arc if you like as Sonos sells a bracket for a further £99.

Setting up the Arc is a breeze, especially if you already have other Sonos products. And if you do, you’ve probably already swapped over to the new S2 app. This new system is needed to support products like the Arc but is incompatible with some (much) older devices.

After saying they would be essentially bricked and stop working, Sonos did a u-turn and you can now run them in a parallel system. You can find more details about the S2 upgrade and criteria here if you’re worried. 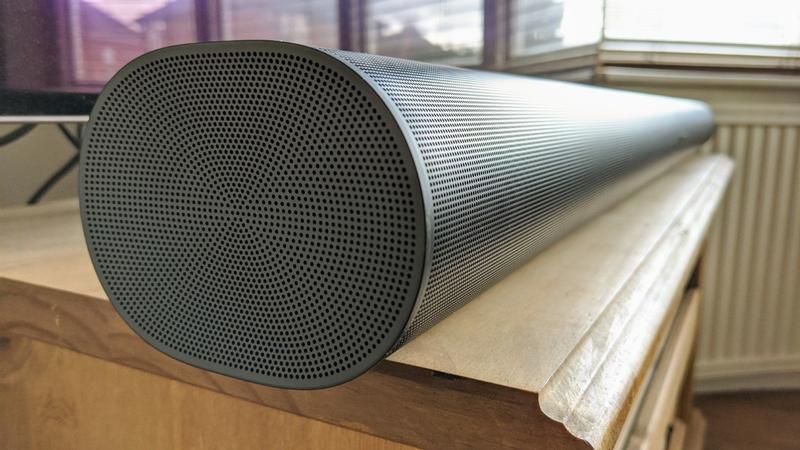 S2 aside, the Arc is essentially a case of plugging the soundbar into the mains and then your TV. You have a choice of classic optical or HDMI with eARC. Note that I’ve tested with the former as my Philips TV doesn’t support eARC.

eARC (Enhanced Audio Return Channel) is one of the new features of the Arc but is also pretty new to TVs so it’s quite possible your telly won’t have a compatible HDMI 2.1 port. If it does, or you plan to upgrade, it can make setting up products easier as well as offering more bandwidth for higher bitrates and therefore higher quality audio.

With no pass-through HDMI port on the Arc itself, you might easily run out of HDMI ports on your TV to plug in all your set-top boxes, consoles and the like.

HDMI issues aside, I found the Arc to be the best sounding soundbar I’ve ever tested.

It might be pretty huge, but Sonos hasn’t wasted all that space inside the Arc. Quite the opposite in fact, as it has a total of 11 drivers consisting of eight elliptical woofers and three silk-dome tweeters. As you can see from the image, many are forward-facing then you have the ones at the ends and then a pair are up-firing.

Really these are what set the Arc apart from other Sonos soundbars as well as many rivals. It supports Dolby Atmos, the audio brand’s 3D sound technology but note that you will need a TV with HDMI-ARC for this to work, along with a service that offers it (there are currently more than 25 video streaming services like Netflix).

If you’re unsure, look for the Atmos confirmation on the “Now Playing” screen in the Sonos app.

Even without Atmos coming through, the Arc sounds incredible with an absolutely huge soundstage that fills the room like gas leaves no part of a vessel untouched.

Sonos says “The upwards-firing drivers create a multi-dimensional soundstage” while “advanced processing creates five horizontal phased-array channels that masterfully deliver sound to your ears from all directions at exactly the right moment.”

And that’s not just marketing guff. Spacial is the best word to describe the Arc’s sound as you really can hear content coming from all around in a very similar way to the sound you’ll have experienced at the cinema. 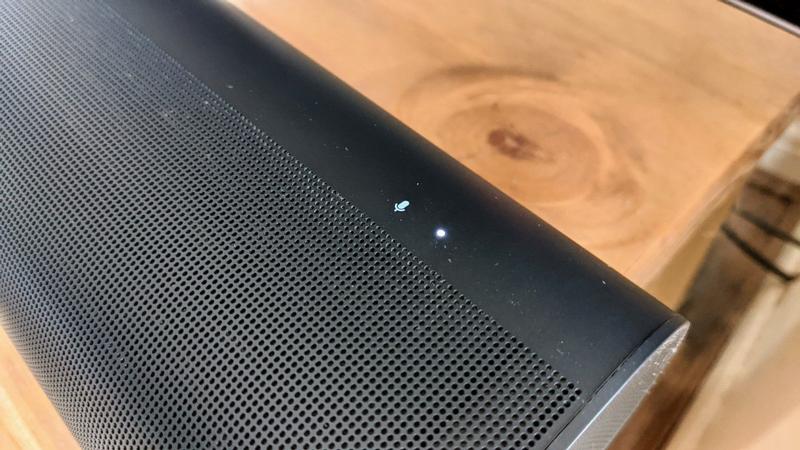 You can pair the Arc with rear satellite speakers like the Sonos One SL if you like but there’s probably no need considering how good this tech is. There’s also the option to add the Sub (now upgraded to Gen 3 with some fairly minor upgrades) but again, the subwoofer will be overkill for the average UK home.

The bass available on the Arc is powerful and rich and I’m often turning it down in fear of annoying the neighbours.

When you’re not watching an immersive film, the Arc is an excellent speaker to have in the house for music or listening to podcasts etc. As I’ve come to expect from Sonos over the years, the sound quality is absolutely top-notch and won’t fail to please your ears.

Beyond this, you get a set of features you’d probably expect from a Sonos product that costs this much. That is to say, it has support for Alexa, Google Assistant, AirPlay 2, you can use your TV remote to control volume and it automatically knows whether it’s wall-mounted or not.

Either way, Sonos’ Trueplay means the speaker will tune the sound to the acoustics of the room you put it in. 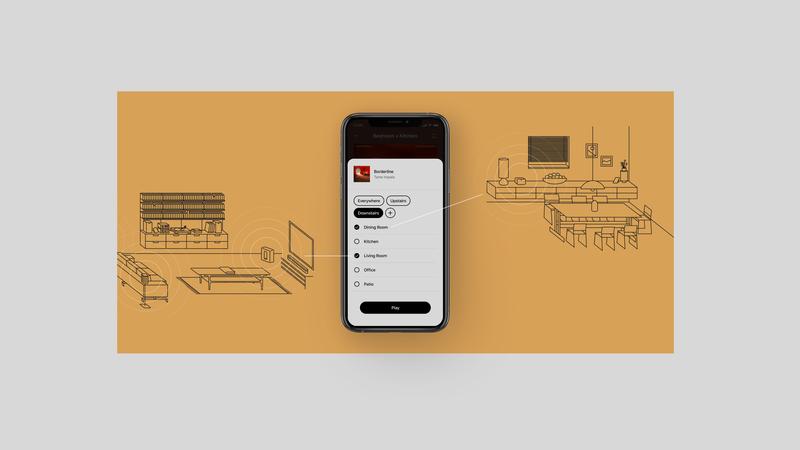 Upgrading to the new S2 app might be a small pain for existing Sonos users but the already good experience is now even better, making it easier to find content etc. I particularly like the ability to save room groups.

As is often the case with Sonos products, the Arc is excellent but may well be out of reach for many consumers due to its price tag. And as of September 2021, the price has been hiked with little explanation as to why.

The Arc will now cost you £899 or US$899, (up 100 for each from the original price) which makes it one of the most expensive soundbars you can buy – although somehow there are some, like the LG GX, that fetch an even higher price.

You can buy it directly from Sonos or a range of retailers including Amazon, John Lewis and Currys PC World.

In the US you can also buy it directly as well as the likes of Newegg, Amazon, Best Buy and Walmart. 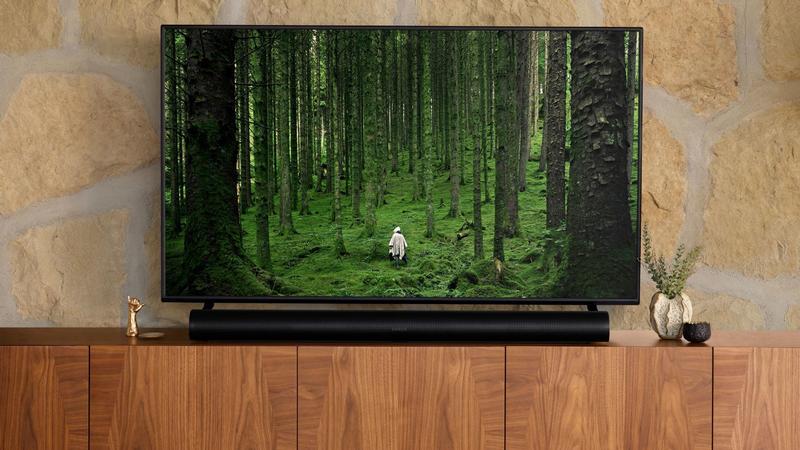 You are getting a very high-quality product, though, so it’s something of an investment. I still have the Playbar which even after 7 years of use still looks and sounds near mint.

Still, it’s possible to get soundbars with decent sound and features for a lot less if the Arc is simply too much. Check our best soundbar chart to see what alternatives there are.

The Sonos Arc is an incredible piece of tech and if you’re in the market for a premium soundbar then you’re very unlikely to be disappointed.

As long as you can afford it and have space for it, the Arc offers a seriously impressive set of features and sound performance. Even if you don’t use the microphone for voice control or AirPlay, the Arc is one of the best ways to get a surround sound experience from a single soundbar.

Performance is so good that you’ll probably find you won’t even be tempted to add in rear surround speakers and the Sub for a proper 5.1.2 experience.

The main downside apart from the pretty high price tag is complications around HDMI and eARC, so you’ll need a compatible TV for the Arc to output Dolby Atmos and there’s no HDMI pass-through so it takes up a valuable port.