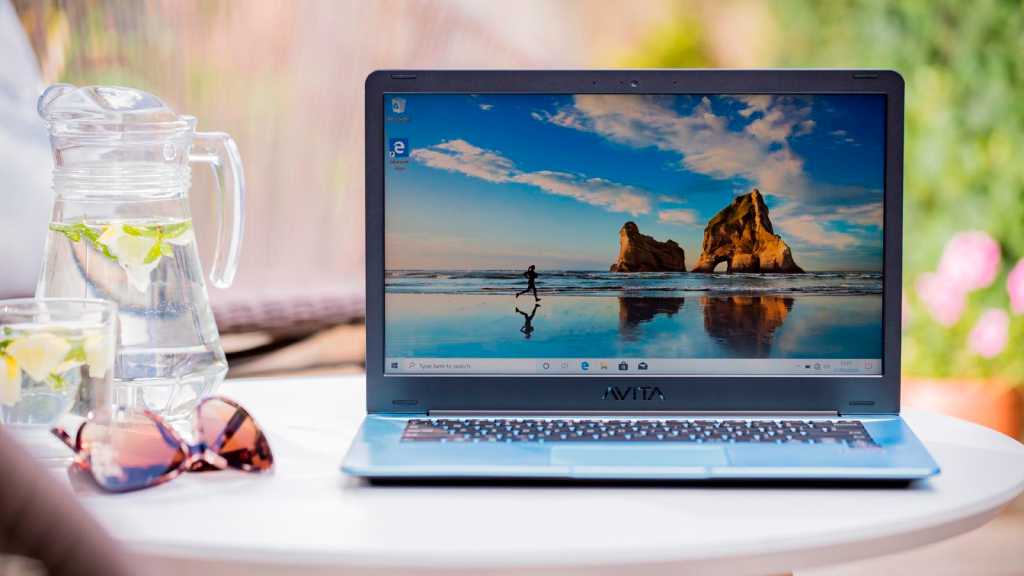 The Avita Pura, is attractive and budget-friendly, but slow performance and a mediocre display makes it difficult to recommend.

US lifestyle brand Avita makes a comeback with the 14in Avita Pura as a follow up to last year’s sleek, premium-looking but budget Avita Liber. How does the Pura compare? We try it out.

Though it’s a budget device, there’s no disappointment when it comes to looks. While I loved the full metal finish on the Liber, the plastic chassis on the Pura convincingly pulls off looking like brushed metal in an eye-catching Crystal Blue.

The Pura isn’t featherlight but at 1.3Kg it’s not far off. It’s bulk-free with a thin profile, which means it can slide into bags and backpacks with ease. Like a MacBook Air, the Avita tapers in shape, getting thinner at the front.

You get a good assortment of ports with two USB-A, one USB-C, HDMI, a 3.5mm headphone jack and a microSD card slot. Bluetooth connectivity is restricted to Bluetooth 4.2, but that shouldn’t really be an issue unless you’re used to connecting multiple devices at once with  Bluetooth 5.0 support.

The bezels look more like budget plastic in comparison to the chassis, with half an inch around the 14in TFT display and an inch along the bottom. If you don’t know what TFT is, it’s short for Thin-film-transistor, which is a type of LCD screen, so no glossy IPS panel like the Avita Liber here, but you do get a Full HD resolution at 1920×1080 and a 16:9 screen ratio.

The matt finish on the Pura’s screen keeps it glare-free, but can seem quite dull, especially if you’re in a battery-saving mode or out in bright lighting. While the Pura wasn’t as memorably dim as the Lenovo V330 workhorse (from £399.99), which mustered a total of 180 nits at its brightest, it was only slightly brighter at around 190 nits at full whack.

Despite being dingy, the Pura has good contrast and can pop with saturated colours depending on what you’re watching. In other words, it’s not very consistent. You also don’t get that super crisp detail which you might on a more premium display.

Of course, this probably isn’t a deal-breaker unless you’re after a laptop that will double up as a media hub.

The Pura’s keyboard layout feels a tad too broad, with keys spaced further apart than what’s comfortable. I felt I needed to stretch my fingers more than I usually do.

Of course, this is a matter of preference and just takes some getting used to. Some might even prefer this spacing – but it is worth noting if you’re someone with smaller hands.

While there isn’t much travel to the keys, it helps to press them with a certain amount of decisiveness. This makes typing slightly louder if you’re naturally a heavy-handed. Students in the library beware.

There isn’t a num pad, which might feel slightly restricting but is normal for a laptop this size.

You do get a decent size trackpad that’s comfortably close to the keyboard, but the whole palm rest feels, again, slightly too broad, as though you have to reach over to access the keys.

Sure, the keyboard takes some getting used to, and the screen isn’t quite an Apple True Tone Retina display. I can live with that. However, where the Pura tests patience is performance.

The option I reviewed offers 4GB RAM and a dual-core AMD Ryzen 3 3200U chip, which is on the lower end of the spectrum in terms of performance – but that’s also what keeps the price low.

During testing, the Pura struggled to do multiple tasks at once – which is how most people use laptops, especially students who use it as both a work and entertainment hub.

The Pura strained opening Spotify while I had an open browser. I also found that the bottom started to get quite warm, and the fan became pretty loud, even though I wasn’t doing anything too demanding. The overheating likely restricted the processor performance causing it to act slowly.

You can see its middling performance reflected in the benchmarks, which suggests you are better off with the Ryzen 5 model. While the Pura Ryzen 3’s processing power is marginally better than the Lenovo IdeaPad S340 which shares the same Ryzen 3 processor, it still greatly underperforms compared against the Lenovo V330 and Acer Aspire 3, both of which use Ryzen 5 and Core i5 processors, respectively.

Avita’s Liber model from last year also outperforms the Pura, which had a stronger Core i5 processor.

In some instances the Pura was so overwhelmed doing simple tasks, like changing between windows, the cursor started to lag. Twice, the Pura became totally unresponsive and I had to force it to restart.

While videos on YouTube look decent, if you’re a gamer you will struggle on the Pura. You can also forget using graphics-heavy software like Photoshop or Illustrator.

In our 3D Mark graphics benchmarking tests, the Pura scored 5688 which is still behind other budget options like the Lenovo V330 and Acer Aspire 3. Don’t attempt to do anything too demanding.

In our PC Mark 10 test, which measures how well the machine can handle day-to-day tasks like word processing and video conferences, the Pura simply couldn’t finish, quitting after just a few minutes of starting the test.

The Pura R3 is best for word processing, social media browsing, and light entertainment. If you prefer a budget laptop that’s better suited to gaming, you’re better off with the Acer Aspire 3, which comes packed with an 8th-gen Intel Core i5 processor, something you’d find on more expensive machines given the Aspire 3’s £499 price tag.

While Avita claims an eight-hour battery life. However, in our battery test where we play a film on loop at 120 nits brightness, the Pura lasted nearly 6 hours.

In real-world conditions, you’ll probably squeeze around 5 hours – or less if you’re gaming.

The Pura operates in Windows 10 Home in S Mode. If you’re wondering what that is, Microsoft defines it as “a version of Windows 10 that’s streamlined for security and performance, while providing a familiar Windows experience.”

While that sounds great, it also means you can’t install apps outside the Microsoft ecosystem.

As Microsoft continues, “To increase security, it allows only apps from the Microsoft Store, and requires Microsoft Edge for safe browsing.” In other words: no, you can’t use Chrome.

You can opt-out but Microsoft threatens you with the loss of additional security features. I opted out to run benchmarks and let’s face it: we’re all creatures of habit, and my habit is Google instead of Bing. Sorry, Bing.

While the Pura is a budget-range laptop, you can get better performance out of the much cheaper Lenovo IdeaPad S340 (from £279) which sits in the top spot in our best budget laptop chart.

The dance between looks, performance, and price is a complex one.

The Pura ticks off two from that list with solid looks and appealing price but struggles when it comes to performance – which makes it difficult to recommend to anyone who wants to multitask work and play on the same machine.

The Pura should meet your needs if you primarily intend to use it for light streaming, emails and casual browsing. But overheating appears to hamper things badly.

Though if you are truly tempted to buy this range, it would make sense to pay slightly more and opt for the stronger Ryzen 5 processor – but at that price, you can just buy a laptop from a more established brand.