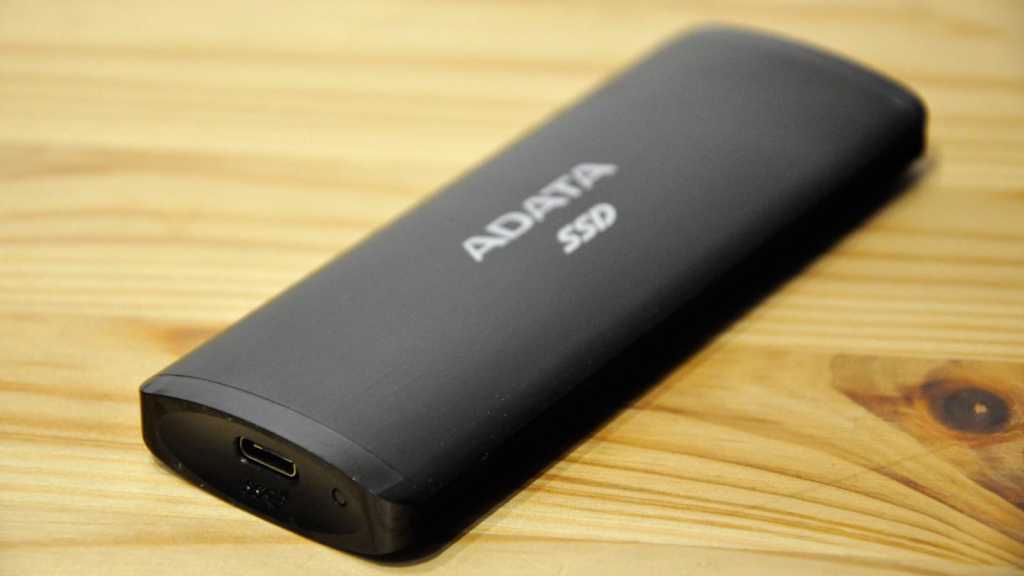 A fast and agile storage device with plenty of capacity that’s easy to pocket. It’s like the Crucial X8, but even more affordable for those that have USB 3.2 Gen 2 ports and NVMe internal drives.

The first portable SSD technology available was based on SATA technology, capping the speeds that these devices could operate. But as more users have transitioned to desktop and laptop systems that utilise NVMe PCIe storage, the need for comparable external drives has bloomed.

Initially, these new high-performance devices were expensive, had limited capacities and required Thunderbolt connections to have sufficient bandwidth. But with the advent of USB Type-C 3.1 Gen 2 ports, and the reducing cost and increasing scale of NVMe storage, we’ve seen a slew of affordable NVMe based external drives.

These include the Crucial X8, Samsung T7 and SanDisk Extreme PRO. And, now swelling their ranks is the Adata SE760, a drive that promises to deliver both on performance and price.

It’s hard not to notice the similarities between this and the Crucial X8, since they both use a lozenge metal tube encasing an NVMe storage device.

Putting them alongside each other, the SE760 is 12.2mm longer, 3.5mm thicker but 9mm narrower.

Where crucial went with a two-part cable that segments for different port types, Adata instead includes both USB Type-A and Type-C cables – although both are only 21cm long so longer cables would be appreciated.

Each cable terminates at the SE760 with a Type-C port, and a small LED indicator there indicates drive activity. To use this with a computer it needs a minimum USB 2.0 with a Type-A port, but to experience the full performance envelope USB 3.2 Gen 2 Type-C is the preferred interface. 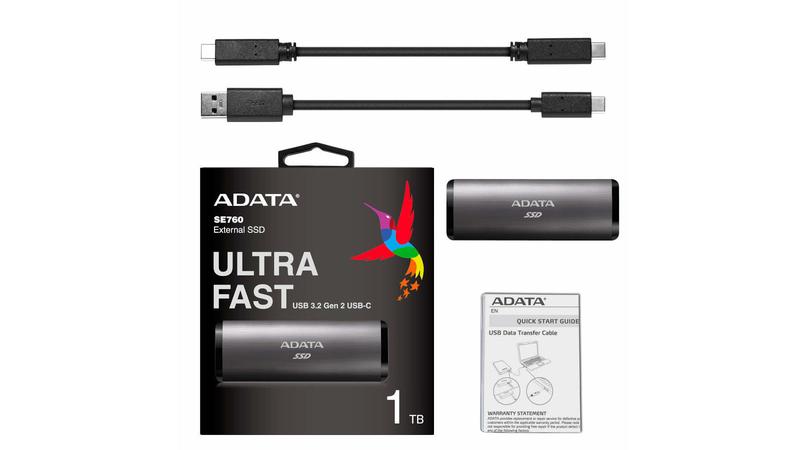 The top surface sports the Adata and SSD logos, and on the rear is the capacity, manufacturing standards and a serial number. This review drive was manufactured in Taiwan according to the markings.

Available in both Black and Titanium Grey, the SE760 is available in 256GB, 500GB and 1TB capacities.

The drive contains no software, but you are directed by the Quick Start Guide to the Adata website where you can download some basic software that we’ll discuss later.

It’s important to realise when shopping for external SSDs that they’re not all created equal, and the relative performance you might experience is dependent on a number of internal and external factors.

Internally this drive uses NVMe (Non-Volatile Memory Express) technology, the same as M.2 NVMe drives that are the standard storage devices for current PCs. Because of the bandwidth available through NVMe, these drives can be up to six times faster than SATA SSDs that hit their limit at about 550MB/s.

The SE760 isn’t that quick, because it’s limited to a degree by USB connection technology that has a theoretical limit of 10Mbit/s or around 1200MB/s. When some of that bandwidth is used for control and error correction, the best possible speeds it can achieve are in the 1000MB/s range, even if the internal NVMe technology could go faster.

If you are looking for even faster external storage, then you need to explore Thunderbolt 3 connections that have double the bandwidth of USB 3.2 Gen 2. 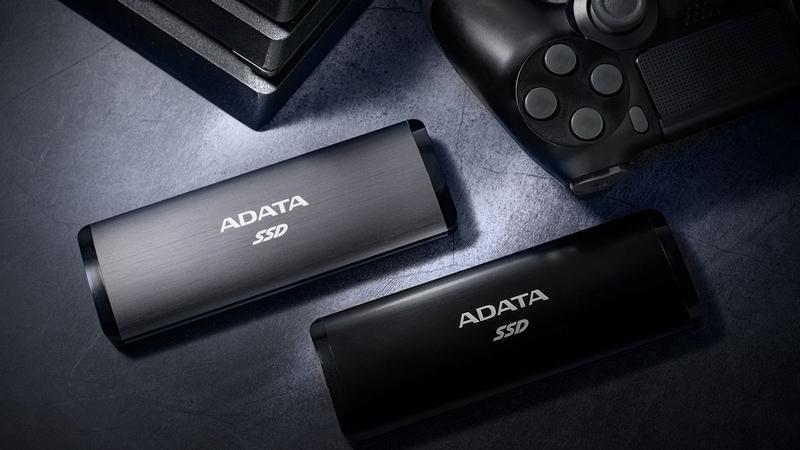 Therefore, the SE760 is delivering the best performance it can with the connection technology it has, and if you only have USB 3.1 Gen 1 connection, you should expect around 500MB/s.

You should expect this drive to function like any other piece of USB connected storage, as it has no enhanced features that some more expensive solutions include. It has no encryption, and it comes with no software pre-installed.

The Adata website offers two utilities for the SE760: HDDtoGO and OStoGO. It turns out, however, that the link to HDDtoGO was added in error, as it won’t work with either the SE760 or SE800.

OStoGO does work on this drive and provides a means to install Windows 7 or Vista on the drive in a form that you could boot on any computer, theoretically.

It’s inadvisable to run unsupported versions of Windows, but the performance of the SE760 should allow the host system to run at a speed that’s equivalent to that of the internal drives.

For optimal use, this drive requires a utility to sync internal folders with the drive, but you will need to organise this yourself as Adata don’t offer one for their external storage products.

Adata is somewhat coy about the exact transfer performance owners can expect, only saying that 1,000MB/s reads are achievable on a PC with USB 3.2 Gen 2 support and UASP driver installed.

During tests, I used the Type-A cable to attach the drive to some front-mounted USB 3.1 ports that are on my test environment, and the results were much less than 1,000Mb/s.

Typically, read speed of 450MB/s and writes of 400MB/s are all this drive can do without a Gen 2 port. That’s about the same as I’d expect from an external SATA SSD, and I know that the hardware inside the SE760 is much, much better.

When I connected the drive to a Thunderbolt 3 port, downgraded to Gen 2 by default, the results were closer to expectations, and Adata’s claims. 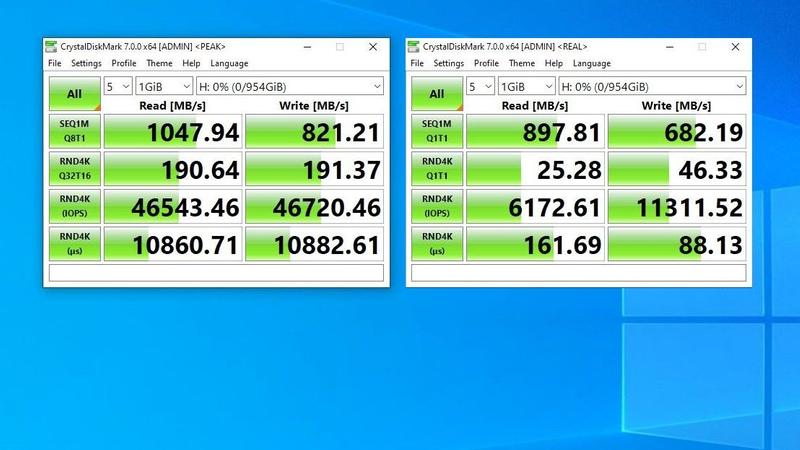 Using CrystalDiskMark 7 as the first test, I achieved 897MB/s read, and 682MB/s write in Real mode, a configuration that tries to simulate realistic performance. But peak performance was 1048MB/s reads, and 821MB/s writes, showing that the quoted reads from Adata weren’t an exaggeration.

Testing under AS SSD 2.0.7316 showed similar results, with read performance of 941MB/s and write of 758MB/s, confirming the CrystalDiskMark assertions. These scores are nearly the same as the Crucial X8 to within a couple of percentage points.

And, as they both have a three-year manufacturer’s warranty, it is mostly the lower cost that separates the Adata SE760 from the Crucial X8.

You can buy it from the likes of Amazon and Alza. 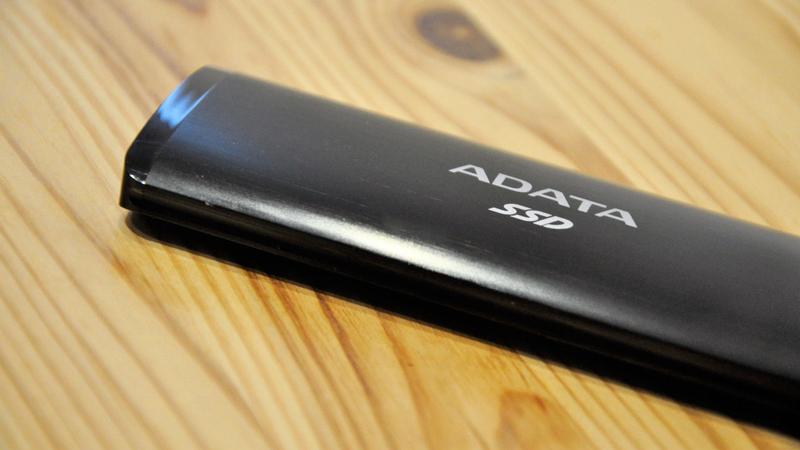 That cost puts it directly into competition with the Crucial X8, and the SE760 is $25 cheaper for the 1TB capacity. And, it’s even $10 less expensive than Sabrent Rocket Pro.

Other options, like the SanDisk Extreme Pro SSD and Samsung T7 Touch, are significantly more expensive.

The 1TB SE760 reviewed here is a highly competitive choice then, but you can check out our chart of the best portable hard drives and SSDs to see what else is available.

It’s hard to come up with much to be critical about in the SE760, except for the short cable length. But even that choice is understandable and common, given that longer ones might reduce the voltage on laptop ports to the point where problems can occur.

For desktop users, invest in some longer cables to avoid the dangling drive scenario for those with ports on the front or rear.

It would be nice to have encryption, and maybe a bundled application to sync folders from the internal storage to the external drive, but alas Adata offers neither.

Price is the critical component in flash storage products, and Adata has positioned the SE760 to offer the best speed at an aggressive price. What it has delivered is an almost identical product specification to the market-leading Crucial X8, but at a lower cost.

The signs are already apparent that the SE760 is going to be a very popular drive, as waiting for external driver transfers to complete is an irritation that most users would like to address if the price is right.