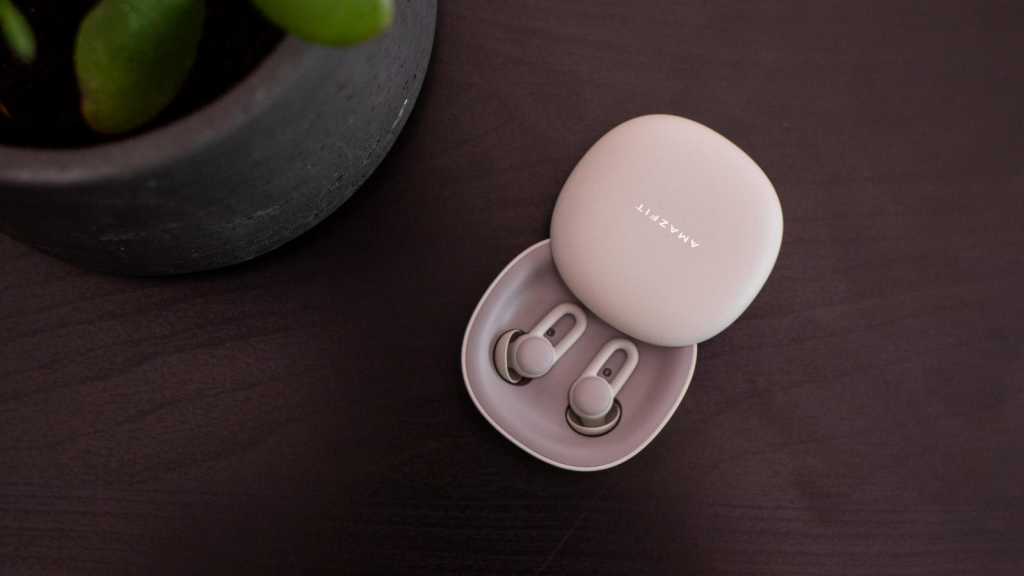 The Amazfit ZenBuds absolutely nail the core concerns, with a comfortable fit and enough battery to last all night and make it to the alarm clock – we just wish they’d let you use your own audio.

The Amazfit ZenBuds aren’t the first headphones designed for sleep, but they might be the best yet – though they still come with some serious caveats.

Owing a serious design debt to the Bose Sleepbuds – themselves discontinued after persistent battery and charging issues – the ZenBuds have fixed their flaws and thrown in a load of sleep tracking tech to boot.

The big downside? You’re limited to listening to sleep sounds from the app, so anyone who wants to fall asleep to podcasts, audiobooks, or their own music is fresh out of luck.

The obvious challenge for sleep headphones is that they’ve somehow got to be comfortable enough to wear for eight hours straight, including when you lie on your side. 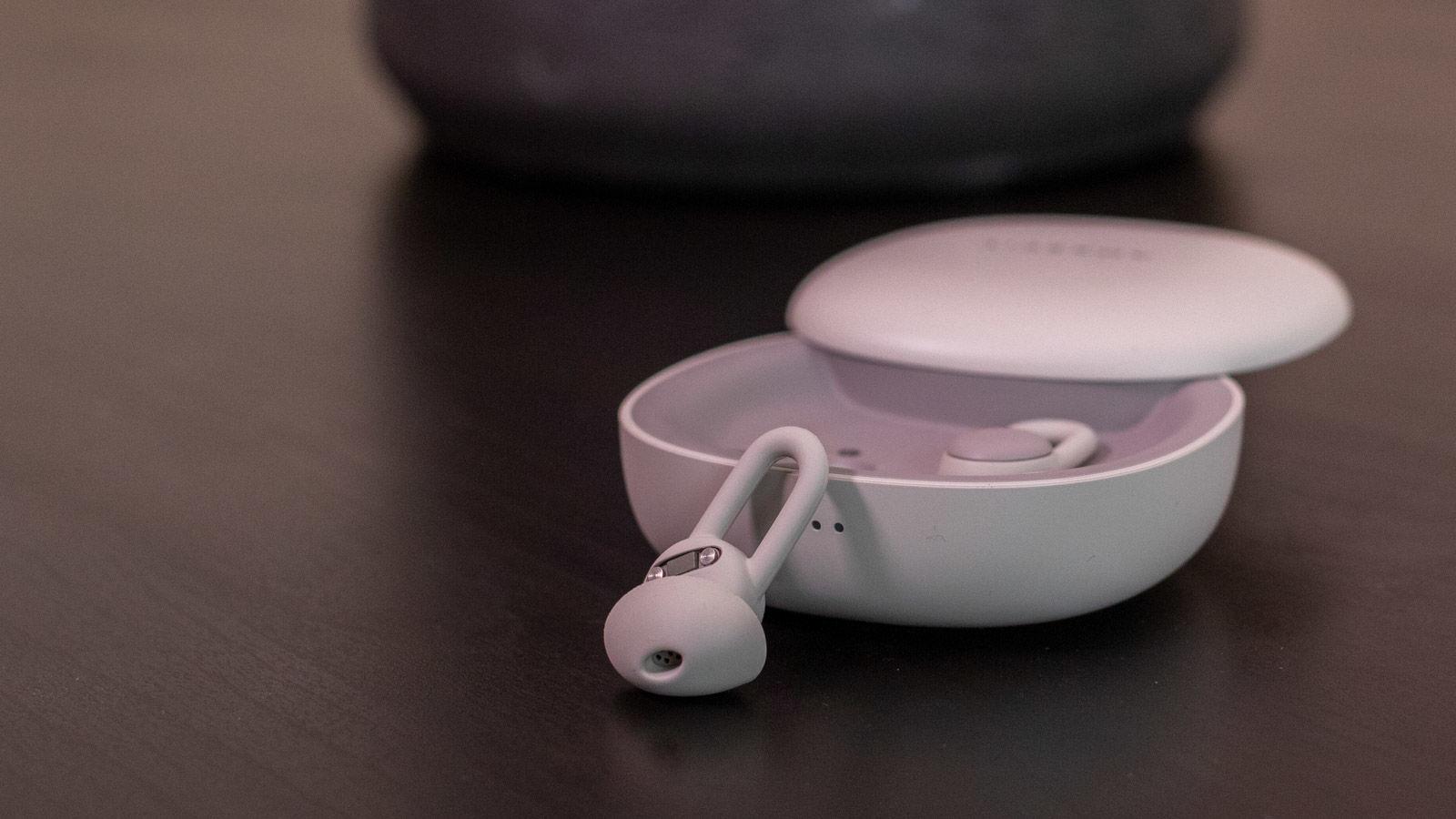 I’m not going to claim that I never felt any discomfort at all when wearing the ZenBuds, but I’m immensely impressed by how comfortable they are, and how little they bothered me while sleeping.

There are a few things at work here. For starters, the ZenBuds are super light at just 1.78g per bud. That’s partly because they’re minuscule, with a tiny body that’s small enough to comfortably fit in your ear without putting any pressure on it. That also means the bud won’t stick out from the ear, so even when lying on my side I never felt the bud was being pushed into my ear canal.

The whole thing is coated in super soft silicone that squishes comfortably into your ear – again, relieving any pressure you might be used to from in-ear buds. These are much, much softer and squidgier than other buds. 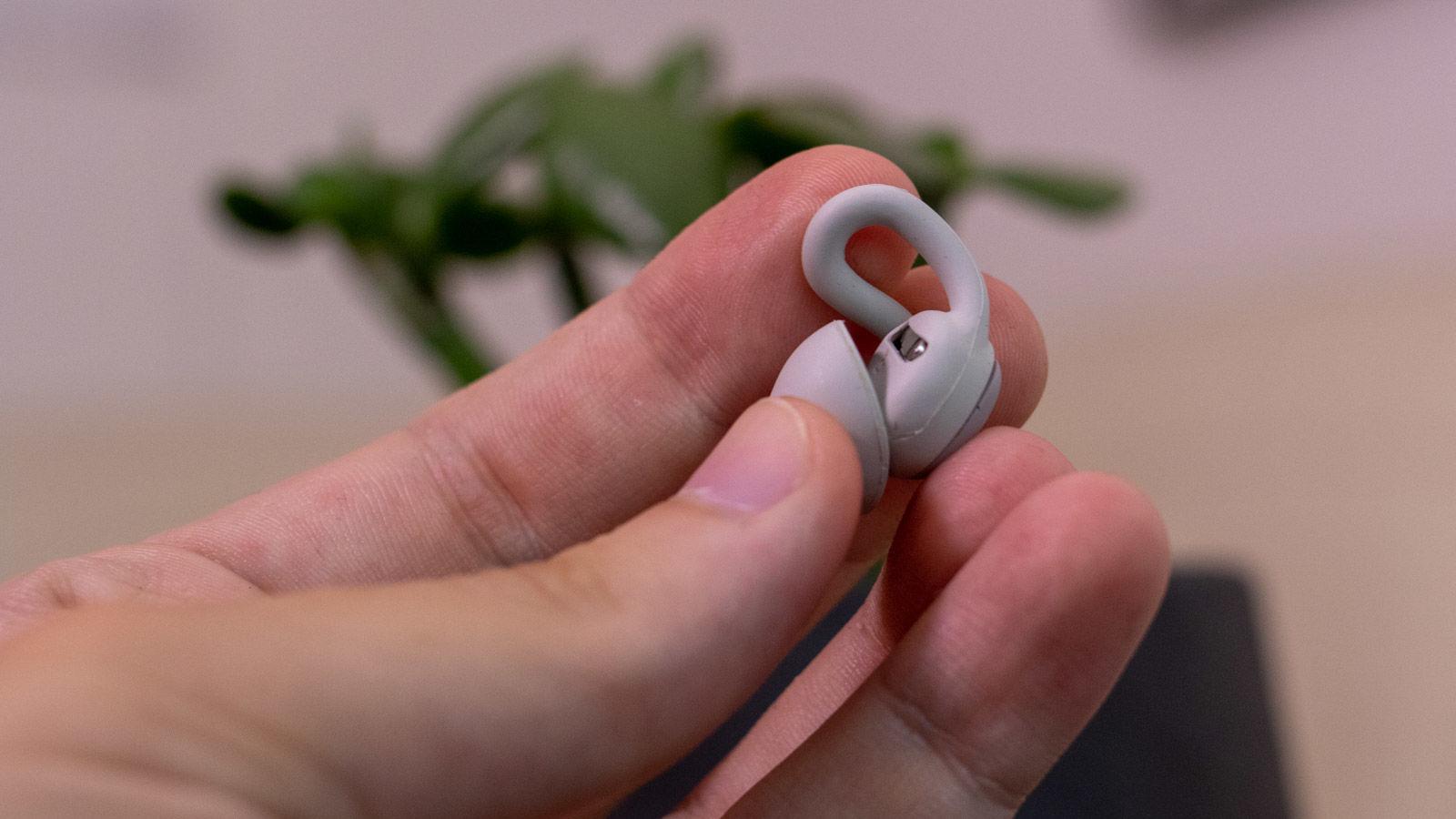 Huami ships the ZenBuds with a choice of four ear tip sizes to help you find the right fit. One minor irritation is that the tips and wings are integrated, so you can’t adjust the size of each independently. Still, there should be enough variety here for most people to find their fit, with the aim being a balance of comfort and a noise-blocking seal.

Most mornings I’d feel a slight relief at removing the buds from my ears – sort of the equivalent to taking your shoes off after a long day – but they rarely actually felt uncomfortable to wear. 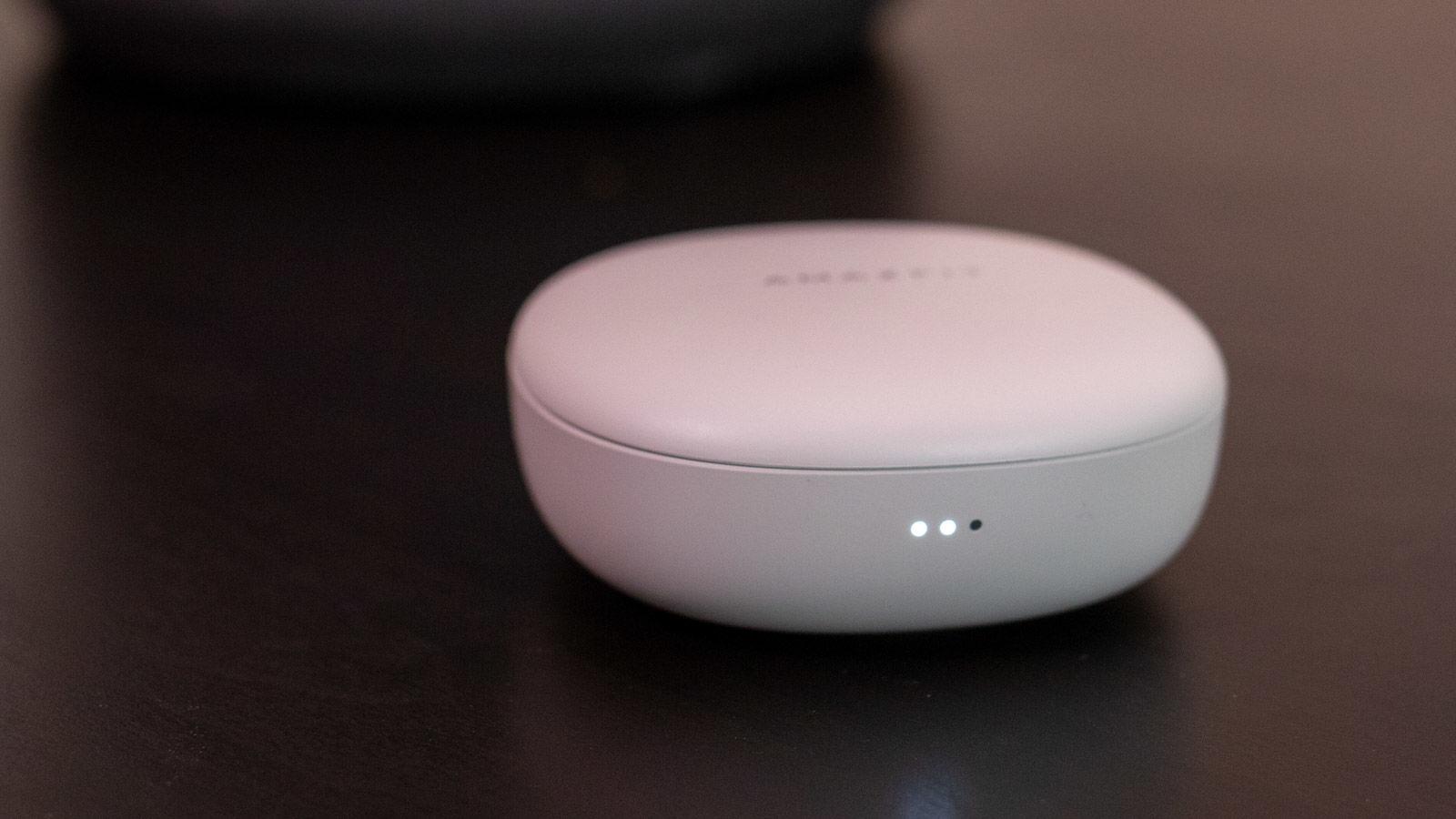 The included battery case is compact enough to travel with, and in a nice touch includes a grippy base for when it sits on your nightstand. Three LEDs indicate battery, but the coolest element is the lid, which swivels round 360-degrees to open up – admittedly another trick borrowed from Bose. This feels a little fragile, so I have some concerns about longevity, but for now I’ve had no problems.

At the end of the day, the main thing that matters here is comfort, and for the most part the ZenBuds pass the all-important Flanders test: it feels like you’re wearing nothing at all.

Actually listening to anything on the ZenBuds is a case of mixed blessings. The core expectation is clearly that for the most part you’ll simply use the Buds to listen to the provided white noise samples and drift off to sleep. 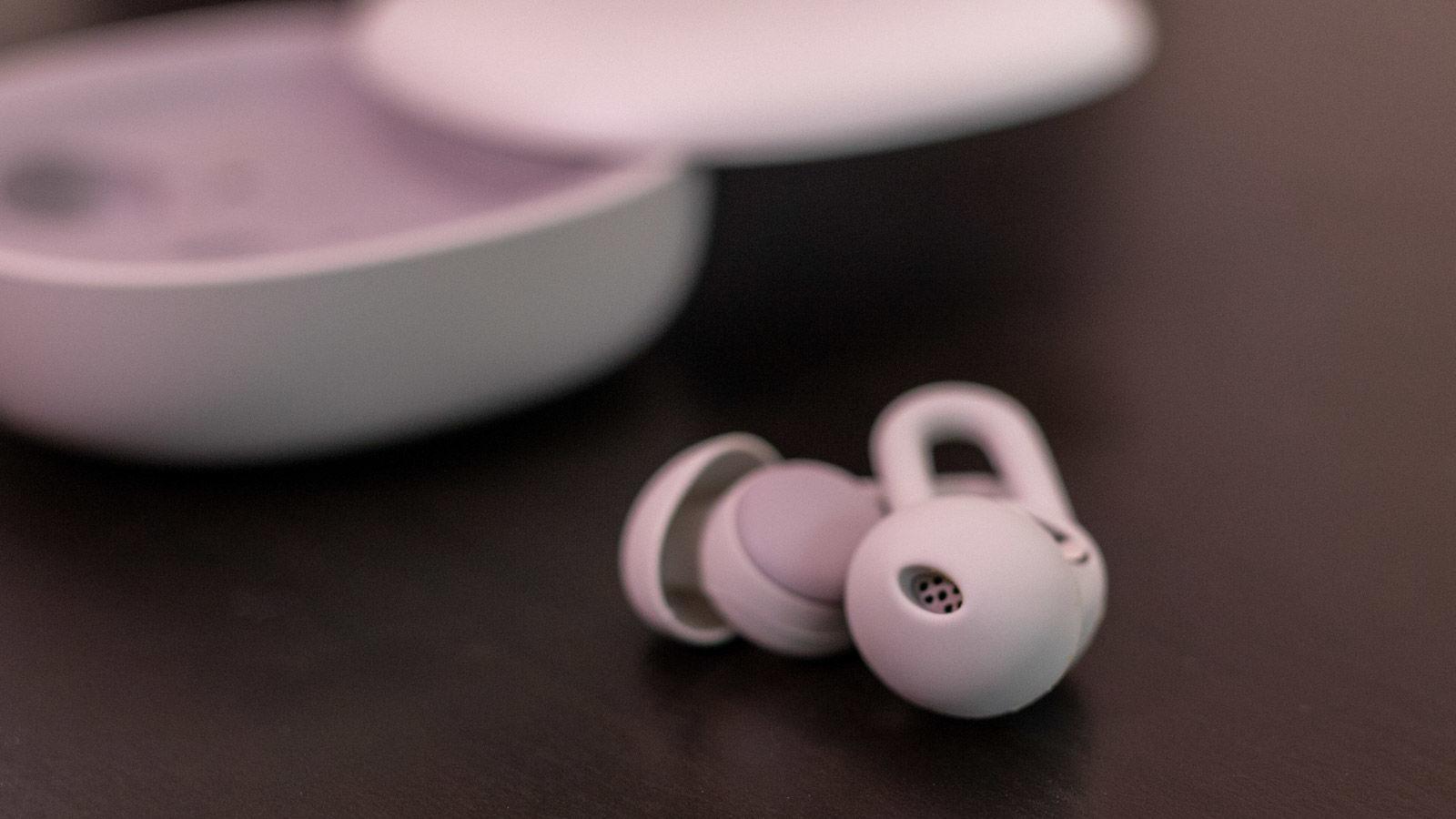 Options range from gentle waves or rainfall to Chinese flute or forest birds. I can’t personally imagine the cawing of a parakeet lulling me into a deep slumber, but I’m sure it works for someone, and the rooftop raindrops did the job for me.

There’s no active noise-cancelling – maybe for the next-gen version – but as long as you get the right fit the silicone tips do a great job of blocking out most external noise, and paired with your choice of white noise it should be plenty for most people. I only worry that without ANC they won’t be able to overpower the hum of a plane or train.

One clever touch sees the ZenBuds remember your preferred sleep sound and begin playing it the moment you take them out of the case, saving you from opening the app before bed.

You can set the headphones to play sounds until the battery dies, or for a set amount of time up to 4 hours, in 15-minute intervals. A Smart Playback option plays audio until you fall asleep, though it’s not perfect – while it mostly worked well, a couple times my lying very still trying to sleep was clearly registered as actual sleep, turning the audio off. 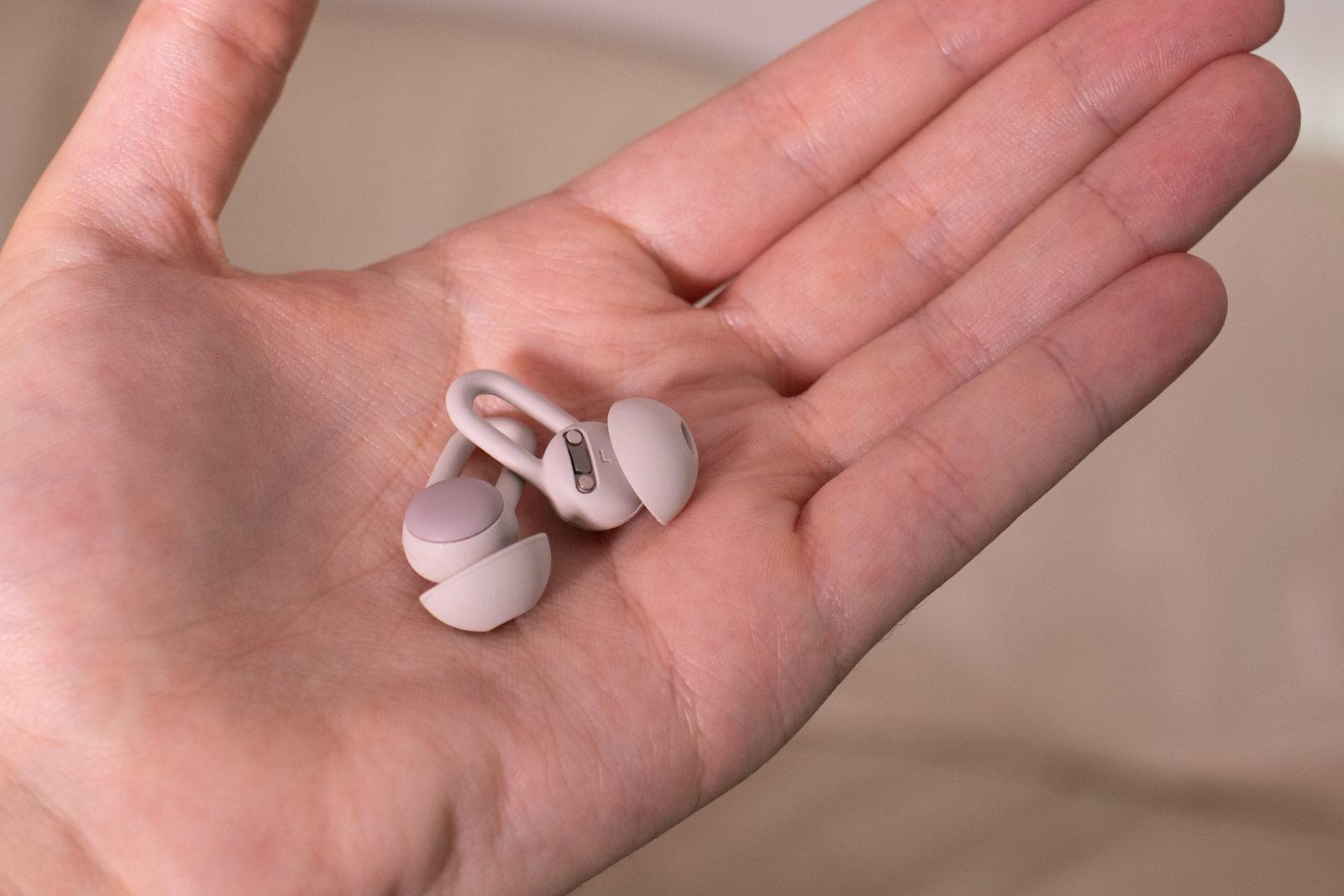 One other handy option is an in-ear alarm. You can set custom alarms for different days and times, set to repeat or not, and will be woken by some gentle tones that only you can hear – perfect if you don’t want to wake a partner, or want a quiet alarm to wake you up from a rest on a train or plane.

Rest Mode lets you quickly set a new timer for up to two hours for a shorter kip, while Focus Mode activates a pomodoro timer, giving you little audio cues to work for 25 minutes and then rest for 5 (you can customise those timings if you prefer).

This, unfortunately, highlights what for me is the ZenBuds’ big limitation: you can’t listen to anything except the audio included in the app. Earphones that let me listen to my own music with a pomodoro timer built in sound great, but I don’t want to work to white noise. 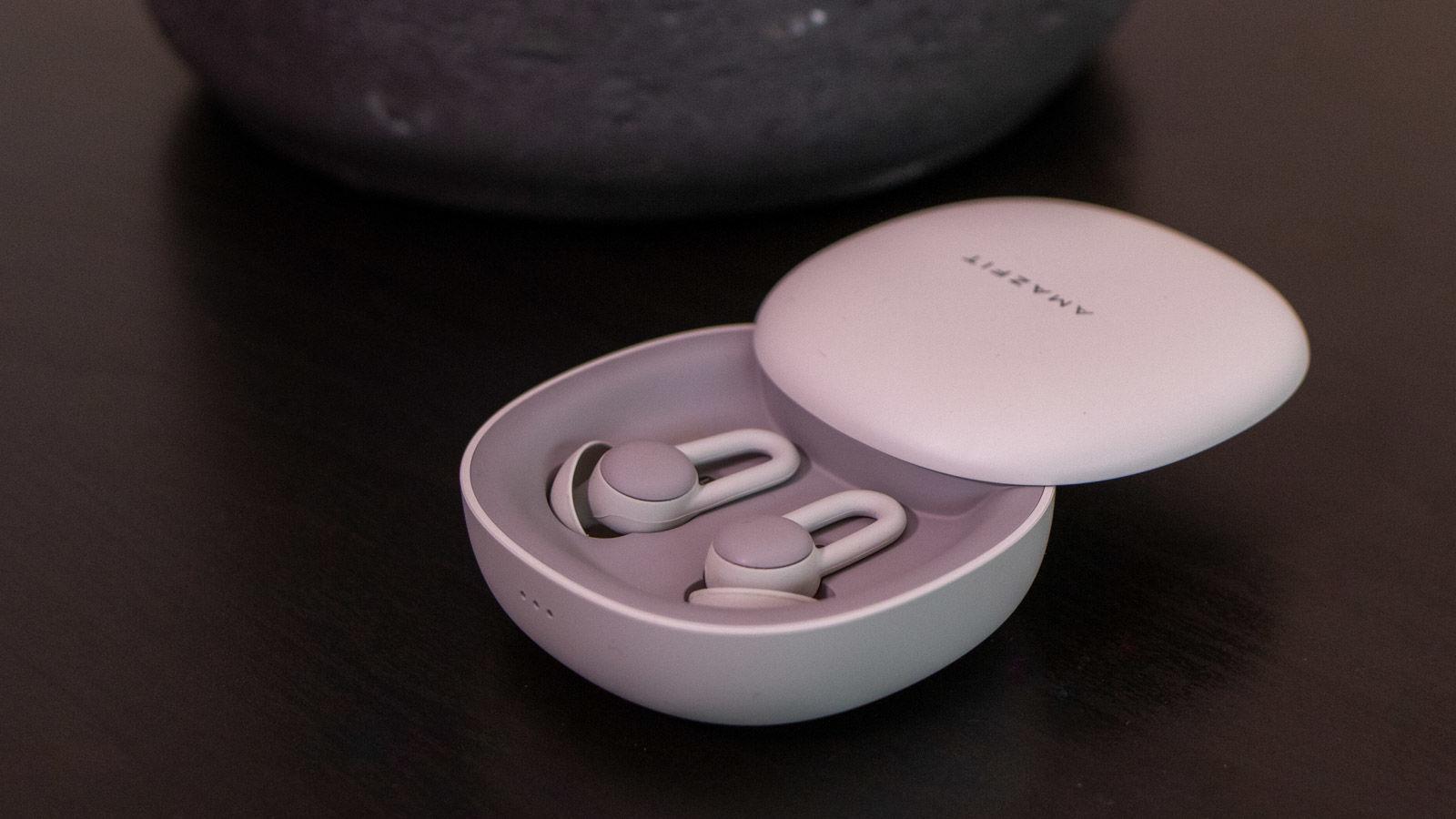 The same problem will affect people who prefer to fall asleep to specific music, audiobooks, or podcasts. In theory the ZenBuds should be great for this – technically speaking they’re just Bluetooth earbuds like any other – but at the time of writing the Amazfit app doesn’t include any capacity to listen to audio from any other source. More frustratingly there’s no easy way to simply pair them to your phone like regular headphones, as the app supersedes the connection, so you can’t even make this work manually.

This is almost certainly a software issue, not a hardware one, and I’m hopeful that Huami will eventually patch in support for external audio. But until it does, there’ll be plenty of people who find the ZenBuds simply don’t sound right.

The buds monitor your sleep position, quality, and heart rate for a fairly comprehensive picture of how you’re sleeping. You’ll get a daily overall score, along with graphs that breakdown the data in more detail. 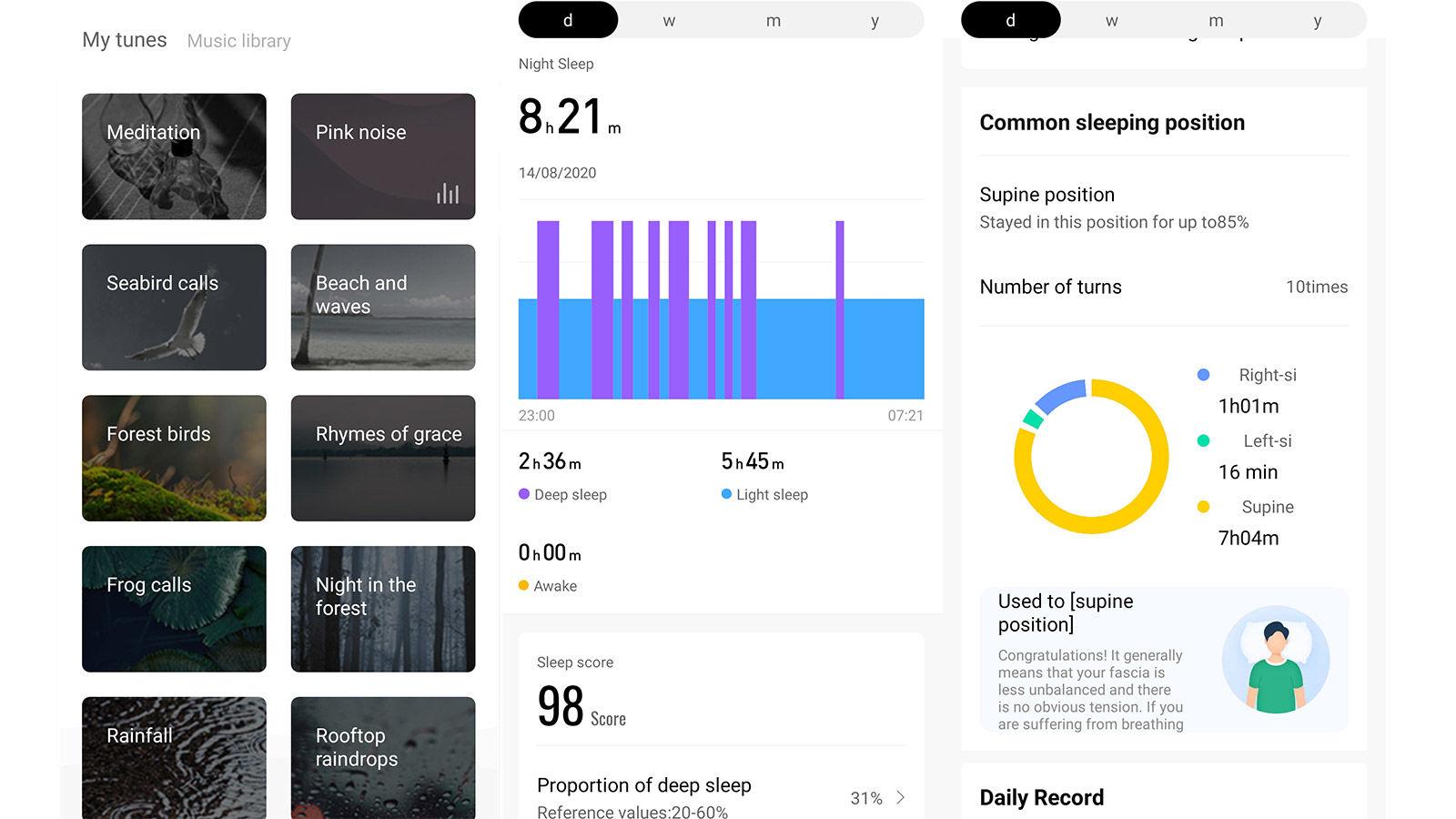 The most interesting perhaps is that the ZenBuds can tell how often you change position in your sleep, and which positions you prefer, giving advice for what that means for your back and breathing.

The data is accessed through the regular Amazfit app, so will neatly sync up to other health data if you also use an Amazfit smartwatch or fitness tracker.

That’s great if you do, but a little irritating if you don’t, as the app will be filled with empty fields and clutter that get in the way of you accessing the core ZenBuds stuff. A separate ZenBuds app would be very welcome here, giving you a cleaner, quicker way to access settings and audio options.

Battery is understandably one of the big concerns with sleep tracking, and it’s famously where the Bose Sleepbuds went wrong, with inconsistent battery life rendering the earbuds nearly useless for many.

It makes sense then that Amazfit has gone overboard. It claims that the ZenBuds will last for 12 hours of sleep tracking including audio playback of up to 3 hours, with a battery life cap of 8 hours if you keep the audio going all night.

That makes the unlimited playback option a risky one – especially if you’re also relying on the ZenBuds as your alarm – but so long as you only use a few hours of audio to get you to sleep you should be alright. It’s hard to really stress test the battery life of something that only works while you sleep, but I can say that using the Smart Playback option the ZenBuds have so far never died on me overnight. 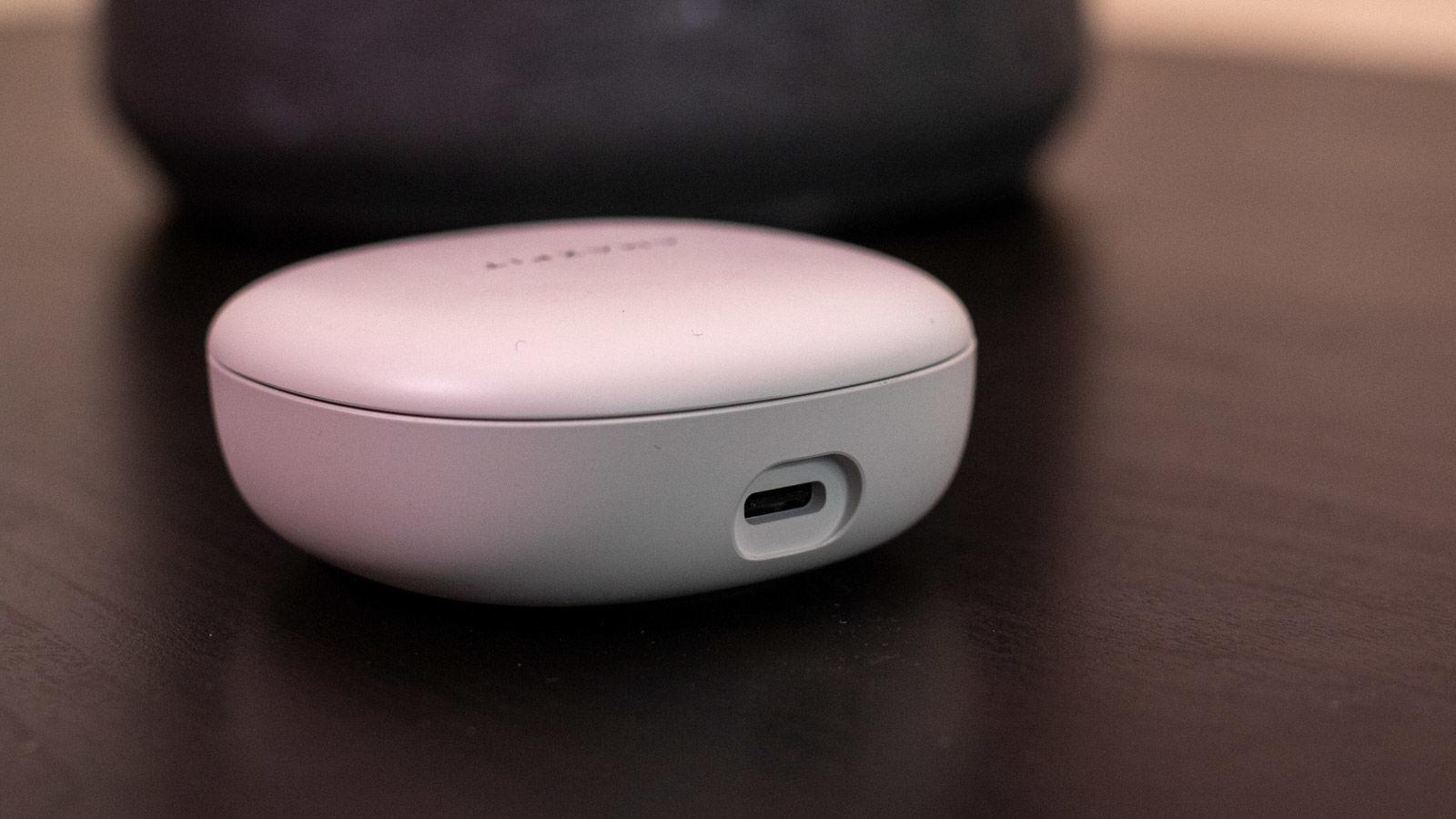 Beyond the buds, the case brings you to a total of 56 hours of battery, meaning you can go the best part of a week without needing to plug anything in, which is pretty phenomenal. When you do need to, the USB-C port and included cable make it quick and easy to top things up.

The ZenBuds are available to buy now from Amazfit’s US webstore for $149.99 (around £115). They’re not available from the UK store yet, but we are expecting them to launch here at some point soon. 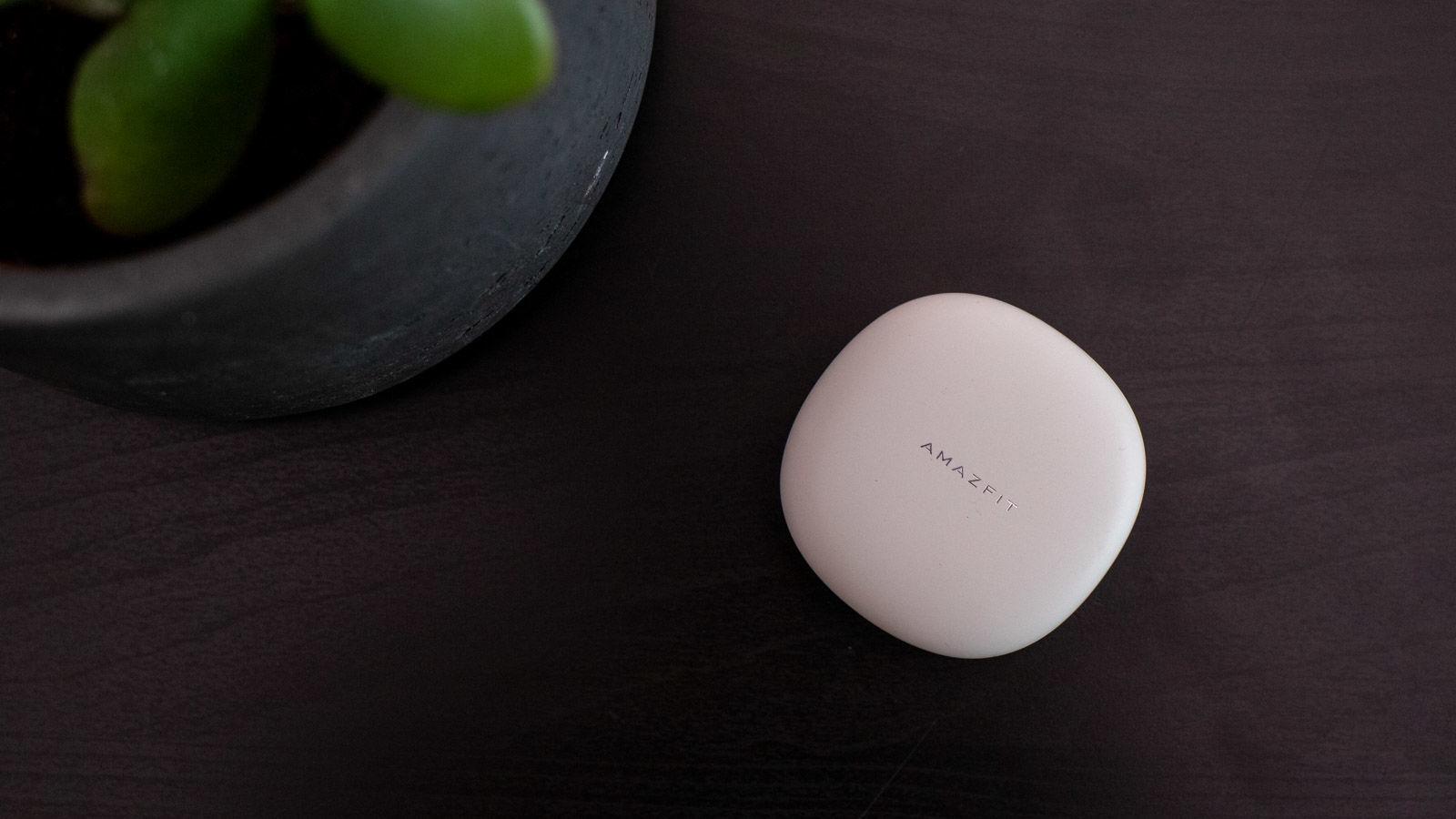 If it’s mainly the sleep tracking you want, and not the audio, then check out our guide to the best sleep trackers we’ve tested, including other wearables and under-mattress options.

The Amazfit ZenBuds absolutely nail the core concerns, with a comfortable fit and enough battery to last all night and make it to the alarm clock.

The app’s a little clunky, but the main limitation is the refusal to let you choose your audio source, which means these simply won’t work for anyone who needs specific sounds to sleep – or even work, if you want to take advantage of the pomodoro timer.