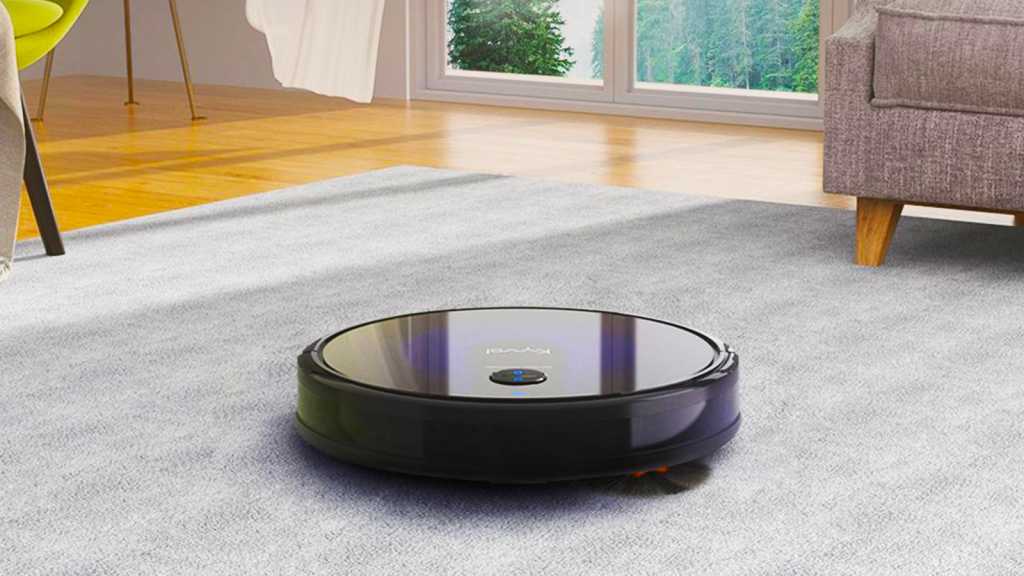 While you might be more familiar with parent company VanTop’s other wares – namely its dash cams and projectors, sub-brand Kyvol recently introduced a trio of competitively-priced robotic vacuums – the most-capable of which is the Cybovac E31.

Highlights include gyroscope-guided zig-zag cleaning for greater accuracy and coverage, up to 2200pa of suction and, unlike the Cybovac E20 and Cybovac E30, which launched alongside it, mopping functionality too. 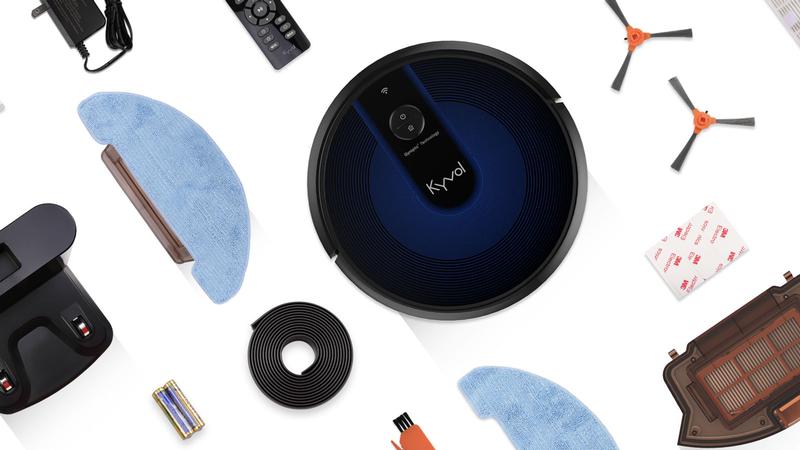 Your money not only gets you the vacuum and a charging base but also a remote (AAA batteries included), a side brush (plus a replacement in-box), the water tank with a mopping cloth already fitted (plus a replacement cloth), a spare HEPA filter, a magnetic strip with adhesive pads and a cleaning brush. All in all, a pretty generous assortment of extras come included for the price.

The E31 stands out from its launch siblings thanks to some blue accenting beneath the tempered glass of its circular top, which is a nice touch if you want to pull a somewhat odd flex. The rest of the body, meanwhile, is predominantly translucent black plastic – so may show wear and tear after bumping into things after extended use; in testing, however, the E31’s visible exterior remained looking practically box-fresh the whole time.

This cylindrical vacuum measures 72mm high – equal to the likes of the Eufy RoboVac G10 Hybrid – which proved to be just low enough for my slouch of a sofa but should happily fit under most furniture (where you’d expect a robot vacuum to fit, at least) without issue.

The top of the E31 features flush Home and Clean/Pause buttons, which change colour to indicate various things; like charge state, battery life and WiFi connectivity. The bottom meanwhile is a swathe of matte black plastic littered with the various fundamentals of the E31’s cleaning system. 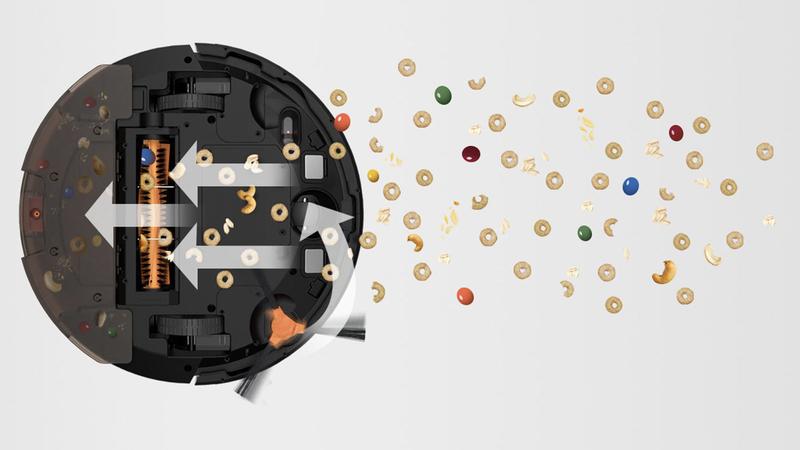 All the moving parts are accented by bright orange plastic, including the side brush, which clips onto the underside of the vacuum securely – so securely in-fact that although there’s certainly no risk of it coming off during cleaning, it does raise a slight concern when it comes to replacement (Kyvol says the side brush should be replaced every 3 to 6 months “or when it’s visibly worn”) – at least swapping this out isn’t likely to be a frequent occurrence for most.

There’s also the main roller – which pops out easily enough, an omnidirectional castor, charging contacts, a protected power switch and a pair of drive wheels with an impressive clearance range; which you’ll notice when you pick the E31 off the ground.

For the Cybovac to transition from vacuum to mop, all you need do is lift the orange latch on the 600ml dustbin (which contains the HEPA filter), pull it out and replace it with the included 300ml water tank, ensuring the mop is fitted too.

The tank has a rubber seal to avoid spills once it’s filled but it’s best not to manipulate the E31 far from horizontal while this reservoir is installed.

The default cleaning mode when using it as a vacuum is ‘Auto’ – defined by its medium suction level (the E31 supports three levels of suction) – and zig-zag cleaning pattern.

It’s the go-to option for everyday cleaning and, sure enough, firing it up for the first time it sent the E31 zigging and zagging across the laminate floors for my apartment for an hour. 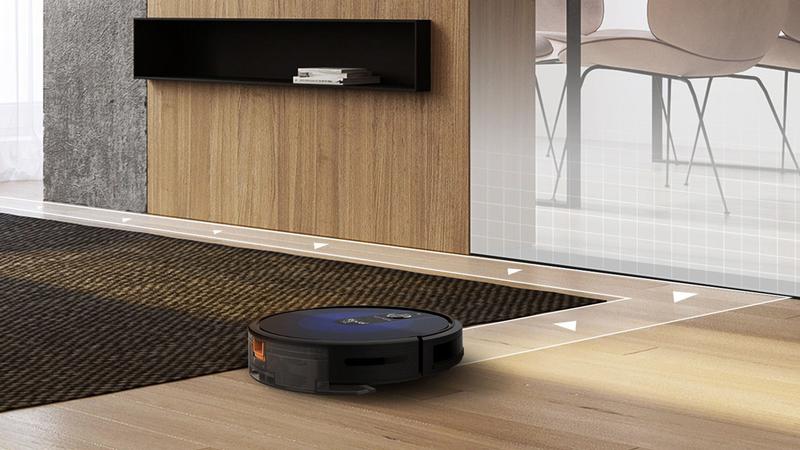 The pathing does seem somewhat random and can favour certain areas while neglecting others. It pays to start the vacuum off in a different location every now and then if you find that it treads the same ground too often.

Even when the floors appear relatively clean to begin with, the E31 is able to fill its bin on a standard run. It overcame the lip of a particularly steep doorway threshold – transitioning from laminate to tile – with ease and resorted to its automatic carpet boost feature when tackling rugs and coir matting, which came out surprisingly well afterwards.

Kyvol suggests that you tidy a touch before setting the E31 loose – moving the likes of wires (such as phone chargers) and tucking carpet tassels out of harm’s way. In testing, I expected the base of a bunched-up curtain in my dining room to cause it issue but it simply treated it like a boundary and moved on without trouble. Thin objects – in my case, the legs of an ironing board – may prove too narrow for the vacuum’s sensors to pick up every time – resulting in an audible crunch as the two made contact – so remove what you can before a cleaning session. 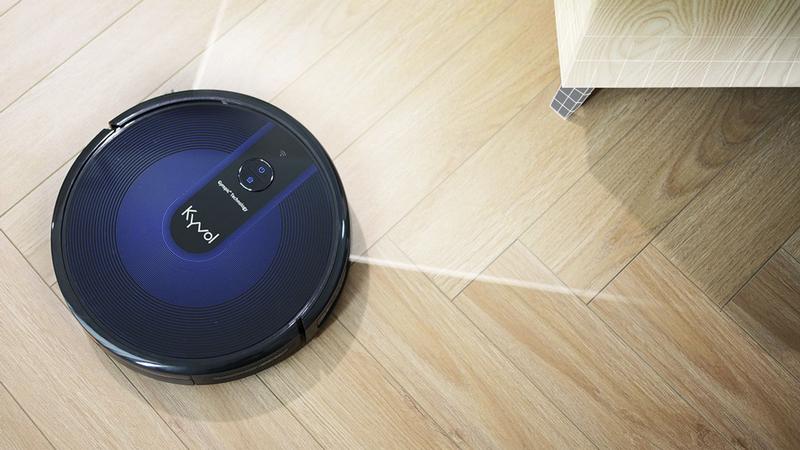 If your E31 does end up getting stuck, however, it’ll issue a loud beep and push an alert to your phone (if you’ve set up the app, that is), making it easy to retrieve and set right.

There’s also the matter of drops and no-go zones. I don’t have any steep or sudden drops in my home but the E31 is equipped to ensure it doesn’t take a tumble down a staircase should it find itself at any form of ledge.

The included magnetic strip can be cut to length and secured with adhesive tabs if you don’t want to the vacuum venturing past a certain point in much the same fashion as its drop sensor and sure-enough it works as promised, every time; even if the strips themselves aren’t the most attractive addition to a room.

If you’re aware of particular hotspots for mess in your house, the E31’s Spot mode will rove outwards in a spiral (to about 1.2m) from wherever its starting point is (and back in again) over the course of a couple of minutes, in order to pay extra attention to any problem areas. Edge mode is similarly suited to paying additional attention to the edges of rooms and around larger items of furniture too – running for 20 minutes at a time.

As well as emptying out the dust bin after a clean, it’s worth using the included cleaning brush to remove any fibres that may have wrapped themselves around any of the moving parts on the underside of the E31. The removable pieces make it easy to pull out any detritus, but it’s also worth checking the drive wheels and castor too, just in case.

As for mopping, changing setups is as easy as removing the dust bin and replacing it with the water tank (once filled); making sure the mop cloth is fitted too. You don’t need to remove the side brush, as I initially assumed, so all that’s actually required is a very quick and simple swap-out.

Similarly to suction when using it as a vacuum, you have the option to choose the water output (from the app UI at least) across three levels, which you’ll have to decide upon based on the flooring you’re having cleaned.

I had it set to level two and kept the mopping to the tiled surfaces of my kitchen and bathroom. It’s fair to say that this feature is great for a surface level clean but as a hybrid, the E31 lacks the grunt necessary to truly scour tough stains or get into the grouting between tiles with any real fervor. It’s still a nice inclusion, but its description in Kyvol’s marketing materials as a “mopping helper” seem apt.

While the included remote allows for easy operation of most of the Cybovac’s functions, including manual controls, cleaning modes and scheduling, it’s Kyvol’s mobile app that offers the richest experience.

The app requires that you make an account, which isn’t a particularly arduous process, and once signed in grants access to all of the functionality of the physical remote, along with a heap of additional data. 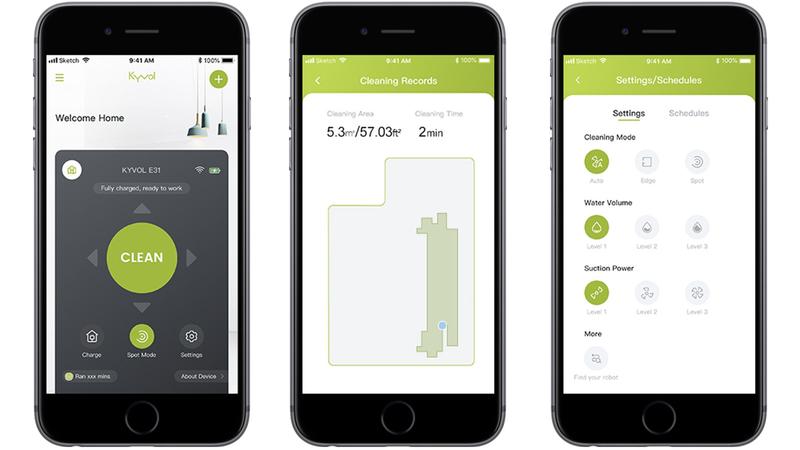 From the app you can see the vacuum’s charge state, how long it’s been running on its current cycle and even view the map that the E31 builds as it roves around your house – which is also a useful tool if you want to know where it is mid-cycle and how much square-footage it’s covered.

In terms of stats, you can also see the state of replaceable parts under the ‘consumables’ section, for things like the side brush and cleaning cloth, as well as the option to name Cybovac. “Why would you want to name the vaccum?” you might ask; because the app is also where you can pull in Google Assistant or Amazon Alexa voice control.

While this is only really good for starting and stopping the E31, it does feel decidedly Jetsons telling your robot vacuum to take a turn about the house.

As for longevity, the E31 takes between 6 and 6.5 hours to fully charge, which promises up to 150 minutes of cleaning time. Of course, mileage will vary depending on aspects like floor surface, suction level, square footage covered and so on.

In an hour-long auto session, with suction level two, covering approximately 55m² across laminate, tile and a set of rugs and coir matting, the Cybovac returned to its charging station with 53% charge left in its cells.

Charge level is visible on the top of the E31 based on the colour of the power button backlighting. Blue means plenty of charge, orange means they’re starting to run out and flashing red is critical.

The E31 may not be as powerful as more expensive alternatives, like the Ecovacs Deebot Ozmo 920 or the Roborock S6 Max V, but for the price, you’re getting a capable machine that doesn’t need nannying and packs an impressive feature-set, backed up by a solid app experience.