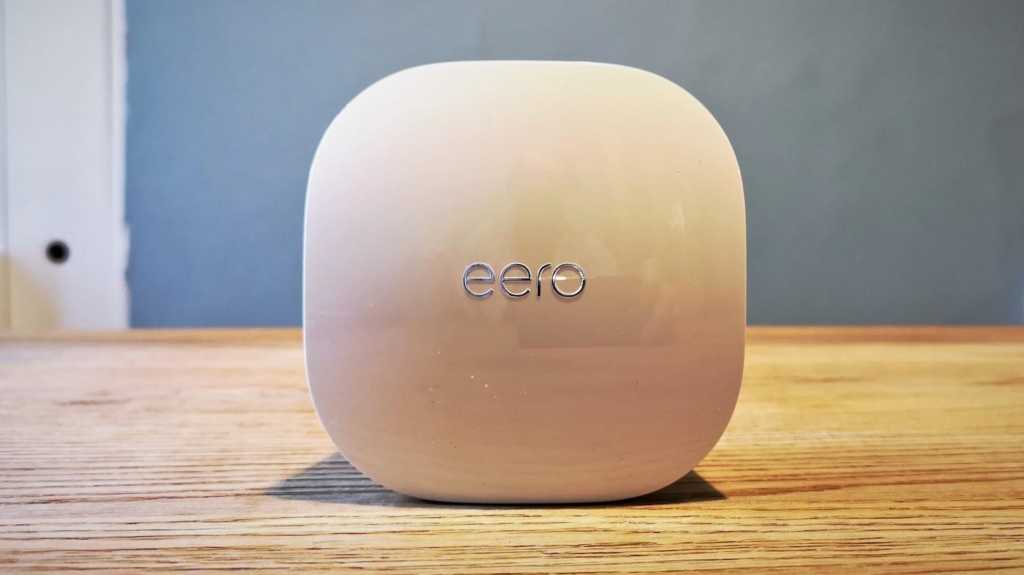 The standard Eero mesh Wi-Fi system is an excellent whole-home solution for people who have struggled with wireless not-spots and Wi-Fi boosters in the past.

Eero set out to be the last word in whole-home Wi-Fi when it launched in 2016.

Since then, the likes of BT Whole Home Wi-Fi, Netgear Orbi, and Google Nest Wifi have all hit shelves promising a similar core offering – multiple wireless hubs set around your home using the same network ID.

Eero says that its proprietary TrueMesh technology will actively reroute traffic between your devices and the access points should something block the signal, or you move into a different room, seamlessly handing over to whichever access point and radio frequencies can provide the best possible connection at any given time. That’s the idea, anyway.

The standard Eero mesh Wi-Fi system – which is on test here – and the more advanced Eero Pro are fighting for a corner in a crowded market, although they are priced pretty competitively. Amazon acquiring the company in 2019 likely means that they’ll be sold for even less this Black Friday, quite possibly with an Echo Dot speaker or two chucked in for good measure.

Eero says that three of its mesh Wi-Fi units working together will be enough to provide Wi-Fi coverage across 460 square metres (roughly 4950 square feet) of home space, while a single unit should cover around 140 square metres (1500 sq.f).

The Eero units are squat cuboids with gentle curves, matt edges and a reflective finish on the top. Measuring 60 x 98 x 98mm, they’re a lot smaller than your typical networking kit as well. One could pass for an Apple Magic Mouse, if you squinted.

Each Eero has two gigabit Ethernet ports on the rear, as well as a USB Type-C port for mains power. All of the ports are packed tightly together, allowing for a very small profile. These things won’t take up much room when they’re dotted around the home.

This could be a problem if you have a lot of devices – smart TV, games console, Apple TV, and other set-top box devices – all in one room, all of which could do with some Ethernet love.

Compared with a typical router, which will give you around four Ethernet ports, the Eero leaves you short-changed – Google Nest Wifi is similarly stingy with wired connectivity.

If this might cause problems for you, then your best bet would be to pick up an Ethernet hub, aka a network switch, or consider the Netgear Orbi RBK50, which gives you three Ethernet ports on the main device.

Setting up your Eero mesh Wi-Fi system from your phone is simple. You’ll need to download the iOS or Android app, connect your first Eero to your modem via Ethernet, and then connect it to the mains. Once that’s powered on and you’ve established an Internet connection, you’ll then be asked to pair it with your phone.

By default, it’ll ask you to pair your phone with the Eero via Bluetooth, but if this fails, you can just manually enter the serial number. As it happened, I had to do this with each and every Eero device, though that’s something I’m chalking up to Bluetooth being rubbish rather than a failing on Eero’s part.

Once the first device is set up, you’ll be able to name the network then create admin and network passwords. I christened the network ‘Robert DeEero’, because why not? At this stage, you’ll also need to tell the app which room you’re installing the device in – living room, dining room, hallway, and so on.

The Eero app is very thoughtfully designed and easy to use. The main Home menu shows you at a glance how many devices are connected to the Internet in your home at any one time, and drilling down, you can see which devices are connected in which rooms, and see whether they’re using the 2.4GHz or 5GHz frequencies. If you want to create a guest network, you’ll have to hop into the Settings for that.

Parents will appreciate the ability to create profiles for devices and schedule pauses if you want to enforce a Fortnite-free period in the evenings. If the worst should happen and you spot a device on your network that you don’t recognise, you can easily block it.

There’s an Eero Labs page where you can tinker with upcoming features such as band steering, which will encourage devices that can use 5GHz Wi-Fi to prioritise connecting to that, and WPA3 encryption – Eero uses WPA2 by default, but support for the newer encryption standard is there, currently in beta form, should you want to use it.

The Eero was tested in a three-bed terraced house in south London. The first of the three devices was installed close to the Virgin Media Super Hub 3 (which had been set to modem mode) and basically served as the home’s main gateway, providing an Ethernet connection for a TV set-top box.

The two other devices were set up in the two rooms in the home where Wi-Fi coverage is typically not great, the kitchen, towards the rear of the house, and a back room one floor up.

As there is no way to split SSIDs on the Eeros, which would allow me to create discrete 2.4GHz and 5GHz channels, I couldn’t directly compare link speeds.

The results below are averages of multiple speed tests, and reflect a typical experience of using the Eero day-to-day, compared with a Virgin Media Super Hub 3 and the Google Nest Wifi (tested in a similar, but different house):

Important caveats: the first two speed tests were recorded with my test device connected to the Eero I’d set up in the living room.

The dip in speed can be chalked up to the fact that while one metre away, I was using the faster 5GHz radio frequency. Stepping away from the device and behind a brick wall saw the Eero automatically switch over to the 2.4GHz frequency, as you’d expect – 5GHz RFs are, of course, poor at penetrating brick walls, while the lower frequencies aren’t as easily impeded.

The third test result was recorded while connected to the Eero set up in the back room of the house, again, using the 5GHz band.

The last test took place out in the garden with three metres and a closed door between me and the nearest access point. Again, the trusty 2.4GHz band took over when a 5GHz connection proved impossible, explaining those lower speeds.

You can immediately see the benefits of a whole-home system compared with relying on a single dual-band router, and although the Eero credo of selecting the best band and access point for you generally bears out, it doesn’t always work.

One SSID to connect them all, multiple access points to find them

Sometimes, when I walked into the back room, the mesh system had decided that I’d be better off connected to the kitchen Eero instead – despite that device being located one floor down and a couple of metres away from where I was actually stood.

Enabling Airplane Mode on the test device, waiting, then turning Wi-Fi back on, saw me reconnect, this time hopping on the back room Eero and enjoying faster speeds than before.

I would occasionally have to do this when out in the garden, or working towards the front of the house, when I should have been connected to the kitchen and living room Eeros respectively.

Perhaps with time, Eero’s dynamic rerouting algorithms will get a better handle on daily meanderings around the home, and this will subside.

Having been around for a while, and there being an Eero 6 kit now, the regular Eero mesh system is now available at a lower price.

While on paper it works out better value to buy the big pack, if your home Wi-Fi needs only require you to buy one extra access point, it’s good to know that you can shell out for just two, and save a bit of money.

These prices are very good in the scheme of things – a Netgear Orbi RBK50 router with just one satellite unit currently costs around £300 – although a three device TP-Link Deco P9 pack will cost you £199, so Eero’s not quite the cheapest player in the game.

For a better idea of how the Eero stacks up, check out our round-up of the best mesh Wi-Fi kits and the best routers.

The Eero mesh Wi-Fi system is a dream.

It’s easy to set up, and provides reliable whole-home coverage, and bar a few teething issues, works as intended. For the most part, the system moves devices to the strongest wireless connections automatically, regardless of where you are in the house.

The price is good too, and the modular nature of the system means you can build a network that’s as big as you need it to be.

A downside is that you’re limited to two Ethernet ports per Eero, one of which will be used to connect to your modem.

If this is going to be an issue for you, but the idea of mesh Wi-Fi appeals, you might be better off sizing up a Netgear Orbi, which is only slightly more expensive, and more generous with its ports.