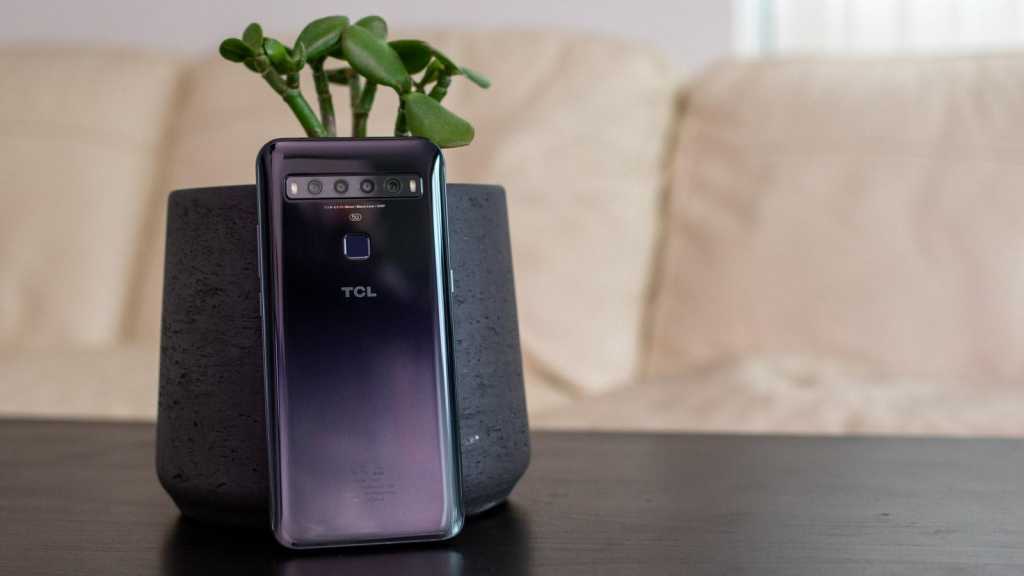 Anyone looking for a large phone with good battery life, solid specs, and an aesthetic that screams ‘professional’ will be fairly happy with the 10 5G, which seems destined to be more popular in the boardroom than anywhere else.

You might not have heard of TCL before, but you’ve probably come across their products before. The Chinese tech behemoth doesn’t sell much under its own name in the UK – TVs, mostly – but it manufactures plenty more, including Alcatel phones and, until recently, the last few Blackberry mobiles.

This year TCL has decided to put its name out there, starting with the launch of three phones in the West. The TCL 10 5G sits roughly in the middle of this set, offering some solid specs – including 5G support, if the name didn’t give it away – at a competitive price, with a subdued, professional (boring?) aesthetic that nods to the company’s recent history with Blackberry.

It’s probably fair to say that whatever you think about the TCL 10 5G, it’s not going to turn any heads. This is a phone built from the ground-up to look functional rather than flashy, and it’s likely to appeal most for use in a professional setting.

The boxy device feels solid in the hand, with a reassuring heft thanks to the glass and aluminium construction, and at 9mm is thick enough to still fit in a headphone jack – at the cost of any waterproofing rating. The glass rear has a subtle gradient finish that on my model goes between black and grey, though there is a blue model if you want something ever so slightly more flash.

The rear is dominated by the phone’s quad camera setup – more on that later – along with a reliable physical fingerprint scanner in an oh-so-functional square shape. Even the TCL logo is boxy and to-the-point.

I don’t want to suggest that the TCL 10 5G is ugly, but it has a clear aesthetic, and it’s worlds away from the flashes finishes and reflective flourishes of many other mid-range handsets. This is a phone for people who want to look like they don’t care how their phone looks – and it looks pretty good for that.

Along with the headphone jack you get a USB-C port for charging and a mono speaker setup along the bottom edge. In addition to the usual volume and power buttons, you also get a dedicated voice assistant button on the left edge – the phone’s sole colour contrasting note, in a simple silver finish.

On the front you get a 6.53in IPS display at HD resolution (1080×2340) with a punch-hole selfie camera in the top left corner. The top and side bezels are relatively slim – though not quite edge-to-edge – though you’ll find a bit more of a chin along the bottom.

There’s nothing wrong with the display, but it’s not leading either. It’s capped at 60Hz, at a time when 90 and even 120Hz panels are making their way into phones cheaper than this, and even at max brightness it feels slightly dim.

Colours are crisp though, and viewing angles excellent, and I’ve certainly had no issues or serious complaints while using it.

There’s support for HDR10+, which is a little unusual at this price, along with AI-driven software dubbed NXTVISION that upscales images and videos to HDR on the fly – though I found it so aggressive that I preferred it off.

Given that TCL is best known for its TVs, it’s a little surprising that it hasn’t leant more into the display tech in its phones and used this as a selling point – especially with a much better panel in the TCL 10 Pro. There’s nothing much wrong with the screen here, but It’s simply not especially remarkable in any direction.

Specs are more impressive. This is one of the cheaper handsets to use Qualcomm’s excellent Snapdragon 765G chipset, which delivers near-flagship performance along with 5G support.

Paired with 6GB of RAM and 128GB of storage (expandable by up to 1TB via microSD), the 10 5G kept pace with other 765G handsets in our benchmarks, and in day-to-day use it’s as nippy as you could ask a phone to be.

Yes, phones with the flagship 865 chipset – or even the Realme X3 SuperZoom with last year’s 855 – will look a lot faster in benchmarks, but unless you play the most demanding mobile games you’re unlikely to notice the difference in real-world usage, and this chip offers plenty of performance for the average phone user.

If TCL is pushing any aspect of the phone hardest, it’s probably the camera setup. With five lenses total – four on the back, one on the front – you’re certainly getting a lot of options for the price, and on paper the 64Mp main lens should also deliver the goods.

Photos with the main lens are by default taken at 16Mp, with four-to-one pixel binning, but there is an option to take high resolution 64Mp shots if you prefer. On the default setting the camera does a great job of capturing detail, with crisp images packed with depth.

At first I thought the phone was taking shots that were scandalously over-saturated, but eventually I realised that this was simply the ‘NXTVISION’ display optimisation software – switched on by default to ‘improve’ photos and videos you look at on the device. Switch it off and your shots will look more true-to-life, and also regain some of their dynamic range – though this is admittedly already the camera’s weak point, often the case with high Mp lenses if they don’t use especially large sensors.

Portrait results are decent, and supported on the rear by a 2Mp depth sensor that helps the phone do a good job of edge detection. Night mode is a little weaker – one of my test photos came out well, but the others lacked detail and were packed with noise and patches that remained inky black. Colours were at least true-to-life, unlike on some phones that make nighttime shots look like they were taken during the day.

The main lens is accompanied by an 8Mp ultra-wide, which is basically fine – it’ll get the job done, but the photos aren’t anything to write home about, with the limited detail made even more apparent by comparison to the main shooter.

Then there’s a macro, which is a frankly rubbish filler lens, there to make up the numbers – a worrying recent trend in mid-range and budget handsets. Colours are washed out and dreary, and with just 5Mp there’s far less detail than the main lens can offer. Any macro shot will look better from the main camera, and so the dedicated lens feels quite pointless.

As for the front, you get a 16Mp selfie lens that’s better than I expected, though the main camera’s dynamic range problems are exacerbated here. There’s a software-driven portrait mode, but without the depth sensor edge detection is weaker than on the rear lenses, and it also introduced a curious amount of additional noise on the subject of the photo.

The 64Mp main lens is what makes the TCL 10 5G feel competitive in terms of photography, but even so I’d hesitate to recommend anyone buy this phone primarily for the camera, as the likes of the Pixel 4a or OnePlus Nord will match or beat its performance for less.

The 4,500 mAh battery in the 10 5G easily sees the phone through a day’s use, and a day and a half seems to be a reasonable expectation from the device, which is nothing to be sniffed at.

There’s no wireless charging – hardly a surprise at this price really – and the wired charging speeds goes up to 18W – fast enough to give 39% of the battery back in half an hour, which should be nippy enough for most.

The TCL 10 5G ships with Android 10 – the latest version, at the time of writing – and includes TCL’s own Android skin on top, the simply named TCL UI.

Fans of stock Android will be pleased to note that this is a relatively unobtrusive software layer, keeping the system clean and easy to use.

There is a little bloatware pre-installed – Netflix, Facebook, and a few dedicated TCL apps like a performance optimiser and a support centre app – and most egregiously these can’t actually be uninstalled. No, not even Netflix. At least for the most part the phone sticks to Google’s own apps for phone calls and messages, and uses Chrome by default, so in using the phone you can easily avoid most of TCL’s inclusions.

That price sets it right in the competitive mid-range market, which is the biggest challenge for the phone. Looking at the UK, the £379 OnePlus Nord beats it on specs and display quality, while the £349 Pixel 4a trumps on camera and software – though admittedly lacks 5G. And that’s not even touching on the cheaper Realme and Oppo phones.

Check out the rest of our mid-range phone chart to see what else is out around the same price.

The TCL 10 5G is a decent enough phone that’s hamstrung by the fact that it doesn’t really excel at anything – and is up against stiff competition that frequently does.

Anyone looking for a large phone with good battery life, solid specs, and an aesthetic that screams ‘professional’ will be fairly happy with the 10 5G, but the average phone buyer will likely find that rival devices offer more in terms of design, display, and camera performance – and often cost less to boot.