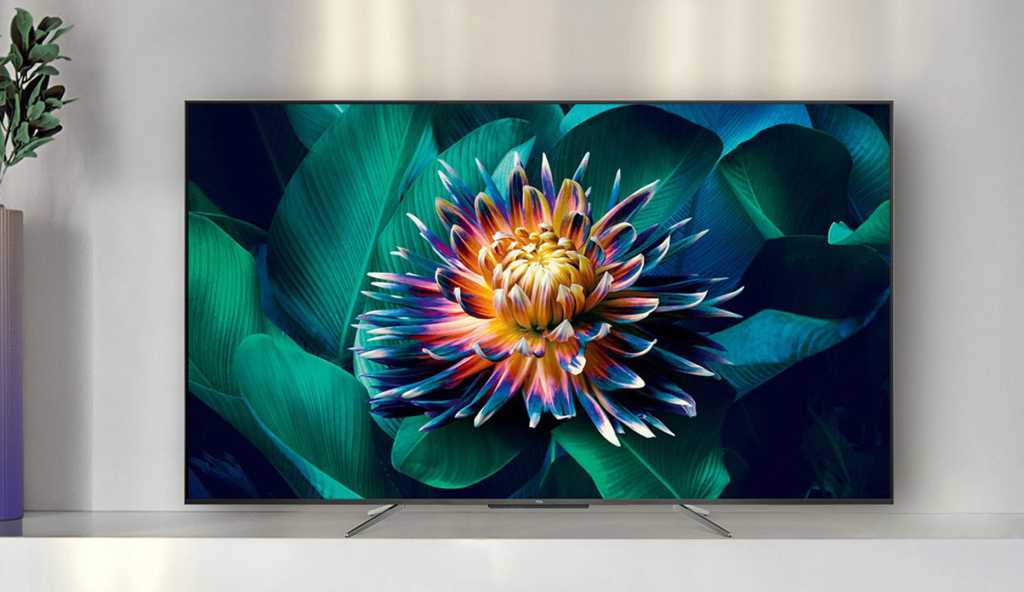 With Android smarts, universal HDR and QLED colour vibrancy you might feel inclined to forgive this budget flatscreen its foibles.

TCL has been nibbling around the extremities of the UK TV market for a while now, mainly touting low-cost budget screens, but with the C715K and its step-up stablemate, the C815, it’s beginning to capture the attention of enthusiasts.

The TCL C715K presents a minimal face to the world, with a three-sided micro-bezel. The set may not be the slimmest in the LED aisle, but it doesn’t have an onerous footprint.

Connections comprise three HDMI inputs, all of which are 4K 60fps capable. One also has HDMI ARC (but not eARC – in fact, there are no HDMI 2.1 morsels on the menu).

In addition, there’s a pair of USB ports, an Ethernet jack to support onboard Wi-Fi, a digital optical audio output, plus an AV mini-jack input.

TCL has stepped up its connected game for this Quantum Dot debutant, combining the latest Android TV OS (v9.0 aka Pie) with Freeview Play.

The Android TV OS has Chromecast built-in, so casting from Chromecast compatible Android apps is a doddle, and there’s integration with the Google Assistant and Amazon Alexa, for those that want voice control of basic TV functionality.

As a smart package, it just about nails it. The caveat is it’s rather sluggish.

When powering up you have to wait for the Android loading screen to clear, and the Freeview EPG is slow to populate. It just doesn’t seem as fast or silky smooth in operation as more expensive models.

It seems someone forgot to tell the C715K that it’s supposed to be a budget TV. The set is brighter and more dynamic than you would expect given the price.

Colour depth is first-rate, bolstered by a dynamic HDR presentation that should satisfy frugal cinephiles.

In addition to Dolby Vision, it claims compatibility with the HDR10+ dynamic metadata standard embraced by Amazon Prime Video, as well as regular HDR10 and HLG.

HDR performance is on the right side of good for this class of screen. I measured peak brightness at 400 nits, which is just about enough to render specular highlights and add believable depth to images. Dolby Vision manages tone mapping on Netflix content.

A run-through of the Will Smith actioner Gemini Man, on 4K Blu-ray, shows the screen performing at 4K/60fps and it looks mesmerizingly crisp.

The Gemini Man Blu-ray disc is a bit of an aberration, as few filmmakers outside of Ang Lee are able to bankroll high frame rate movies, but what we can glean from this is how it will perform with next-gen games consoles running at 4K 60fps.

Unsurprisingly, the set’s HDMI board doesn’t support 4K 120fps, but that’s a spec bridge too high for this cheapie and we don’t chide it for that.

Gaming chops are impressive, though. I measured image lag at a low 9ms (1080/60) when using the dedicated Game mode.

Picture presets include Low Power (which is effectively the de facto Standard setting), and Smart HDR which appears to give an HDR-like hand to SDR source material.

There’s no clever image interpolation on board, but you can select LED Clear motion to reduce blur. Unfortunately, this darkens the screen and adds a difficult level of flicker. This probably isn’t a screen for sports enthusiasts.

Consider stepping up to the C815 if audio is important and you don’t plan on getting a soundbar.

The C715K may lack the Onkyo-developed sound system of its more expensive stablemate, but it’s loud enough for everyday use.

There’s a wide range of audio presets, including Vivid, Low-power, Movie, Music, Voice, Game and Sports. The Movie sound mode, which widens the soundstage, is quite effective.

You can buy it from Amazon, Costco and AO. See what other options you have in our best TV chart.

TCL is top-tier screen maker with impressive technical resources, but until now we’ve only seen budget tellies from the brand. With the C715 QLED, it’s starting to flex its muscles.

It’s still undeniably budget in some ways, with only three HDMIs and a sometimes painfully slow UI, but as an overall package it certainly impresses.

Of course, there’s no shortage of rival cheap TVs out there at the moment, from the likes of Hisense, JVC and Toshiba, but this TCL earns its place at the cut-price table.