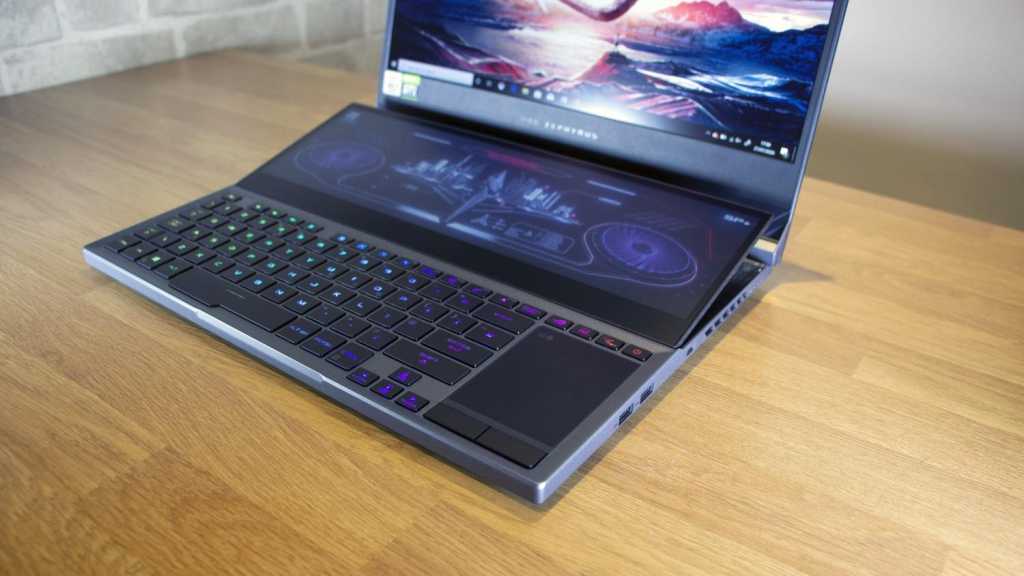 The innovative dual-screen design will be useful for some, alongside components that can handle almost any game or work scenario. This all comes at a cost, though, as well as thermal issues and design compromises.

The Asus ROG Zephyrus Duo (GX550LXS) is one of the most outrageous laptops around, with a dual-screen design, top-tier components and a huge £4,000/$3,700 price.

The second screen is borrowed from Asus’ professional ZenBook laptops, but this addition has been enhanced for gaming – and it helps this machine stand out from rivals like Razer, Gigabyte and Acer.

The second screen dominates this laptop – it pushes the keyboard to the front edge of the machine and means the trackpad is installed alongside. Opening the lid engages a mechanism to tilt the second screen forwards at a 13° angle in order to improve viewing angles and thermal performance.

The Zephyrus looks powerful – like a serious bit of kit – with a body made from aluminium. The logos and air vents are surprisingly subtle, although this rig is still bolder than Razer’s black, minimal notebooks.

The Zephyrus Duo has one full-size USB 3.2 Gen 2 connection and a Type-C port that supports DisplayPort, Thunderbolt 3 and power delivery. There are two slower USB 3.2 Gen 1 connections and an HDMI output.

The smaller Razer 15 offers similar connectivity, while the Razer 17 has better USB options. The Asus is also missing a card reader and a webcam, which is annoying considering how many gaming laptops are used for work too.

The keyboard is disappointing. The keys have a moderate 1.4mm of travel, and they’re soft and quiet. It’s got reasonable speed, but the keys aren’t snappy or weighty. The Asus’ keyboard is only acceptable for typing and for mainstream gaming.

There are issues elsewhere too. The RGB LEDs are inconsistent and often dim. The cramped design means the Return key is only single-height, the left-shift key is small and the cursor keys are tiny.

The installation of keys at the edge of the unit makes for an occasionally uncomfortable typing experience, and the included wrist-rest isn’t much help: the rubber surface isn’t cushioned or comfortable, and it’s not large enough to support bigger hands.

There’s no number pad, but the touchpad can be illuminated with number keys. The pad itself is smooth and accurate, but it’s narrow – a swipe doesn’t move the cursor across the whole screen. The buttons have a little too much movement and they’re slightly wobbly.

Anyone who wants a serious gaming experience will want a USB gaming mouse, and adding a gaming keyboard would be better – although this obviously adds bulk.

The ScreenPad Plus can be used to hold chat apps, browsers and music players while you’re gaming, and it’s the default home for the Asus Armory Crate software. Asus’ own launcher software can group apps together and snap apps around the display, and some tools are optimised for the second screen – including several Adobe apps and X-Split Gamecaster. It works with a stylus, too.

It’s easy enough to use unoptimized apps on the second screen, too – they just slot down and function normally. It’s a shame that more games aren’t supported – right now Dying Light II supports ScreenPad Plus and Overwolf can be used with League of Legends, Fortnite and CS: GO, but that’s it.

The ScreenPad delivers a 200 nits brightness level and 1,000:1 contrast, so it’s good enough to handle secondary apps. There are still some issues here, though. The viewing angles aren’t great – the second panel looks washed-out, and you may have to lean over the laptop to get a clearer view. The touchscreen coating also makes the display look grainy.

There’s also the question of how useful the ScreenPad – while it certainly makes gaming and working more convenient in lots of situations, it’s rarely a game-changer.

The ScreenPad Plus has a resolution of 3840 x 1100 and a 14.1in diagonal, which gives it a density level of 283ppi – virtually matching the 282ppi of the main 15.6in 4K IPS display. That’s smart because it means there are no jarring transitions between the two.

The main display has a 60Hz refresh rate and Nvidia G-Sync. That’s good enough to deliver smooth single-player gaming, which is where 4K excels, but it’s not really cut out for fast-paced eSports.

The panel has a brightness level of 374 nits and a black point of 0.29 nits – both are fine for indoor gaming. The contrast ratio of 1,290:1 is solid, and those figures deliver reasonable depth and vibrant colours.

The average Delta E of 3.29 is fine, and the colour temperature of 7,234K is not wayward enough to cause problems. The Asus handled gamuts well, with 99.2% coverage in sRGB and 97.1% in Adobe RGB. Its uniformity levels are middling – the backlight lost 16% of its strength in the corners. That’s not a great result, but it won’t make a huge impact in most situations.

This screen has the quality for gaming and mainstream work: it’s bright, punchy and has reasonable depth, and it has the coverage for photography and design unless you’re looking for a pro-level workstation laptop that delivers sub-2 Delta E levels.

The speakers are reasonable, with ample volume and decent mid-range performance. The top-end is a little tinny, though, and bass was inconsistent. They’re serviceable but a gaming headsett will always be better.

The RTX 2080 Super Max-Q is one of the beefiest laptop GPUs around, and it’s joined by an Intel Core i9-10980HK. The graphics core has a modest boost clock of 1,080MHz due to thermal concerns, but it still sports 3,072 stream processors and 8GB of memory. The processor uses the Comet Lake architecture and it has eight multi-threaded cores and a Turbo speed of 5.1GHz.

Connectivity comes from Intel Wi-Fi 6 and Gigabit Ethernet. That former is great, but the latter is mediocre –numerous gaming laptops now include 2.5Gbps Ethernet.

The RTX 2080 Super Max-Q opens up a decent lead over RTX 2060 and RTX 2070 machines in most benchmarks. At 1080p it plays games like Wolfenstein and Total War: Warhammer II at averages beyond 100fps, and it handles Far Cry: New Dawn at an impressive 91fps.

Surprisingly, the Asus and its RTX 2080 wasn’t always the fastest option, but these occasional anomalies were recorded in older, less-demanding benchmarks – at 1080p, this GPU just isn’t tested.

At 4K and Ultra settings the Asus played Far Cry at 43fps and Wolfenstein at 64fps. It’s easily quick enough to deliver smooth gameplay in today and tomorrow’s toughest games.

The Asus’ Geekbench 5 score is beyond anything we’ve seen from mainstream Intel CPUs, and it’s also quicker than AMD’s latest Ryzen 9 laptop chips. Whether it’s 4K video editing, design work or photo processing, this laptop will handle it.

The Zephyrus Duo may be fast, but it’s inconsistent in thermal tests. Fan noise is present but no worse than many other gaming laptops, and the CPU and GPU don’t get hot. On the outside, though, the keyboard becomes warm and the underside becomes uncomfortably hot. Hot air is ejected from both sides of the machine, which could be annoying if you’re using a USB mouse.

I also wouldn’t recommend using the Asus’ Turbo mode. While this does a couple of extra frames in games, the noise levels are noticeably worse.

Here are the benchmark results compared with some recent rivals we’ve tested such as the Gigabyte Aero 15 OLED and Acer Predator Helios 300.

Don’t expect great things from the Asus’ battery, either. It lasted for two hours and nine minutes in our video test and just under an hour when gaming– and, even then, the GPU speed was compromised. This laptop is designed to stay rooted to the mains.

Both Razer models omit the eight-core CPU and second screens, but both have touchscreen 4K panels.

You can buy the laptop from Scan and Overclockers in the UK, with a slightly different processor available from Amazon. In the US you can get the Zephyrus Duo direct from Asus.

Check out some alternatives in our best gaming laptop chart.

However you look at it, the Asus is expensive. For some people, it’s going to be worth it: the Asus offers incredible power alongside a good 4K screen and robust design, and the ScreenPad could be a boon in lots of situations.

In several ways, though, the design is niche or disappointing. The second screen can prove useful, but it’s rarely essential. The Asus has underwhelming ergonomics, inconsistent thermals and poor battery life.

The Asus is stunning, innovative and fast, but it’s not essential, not perfect and not cheap – and similar performance levels can be found for less if you abandon its daring design elements.