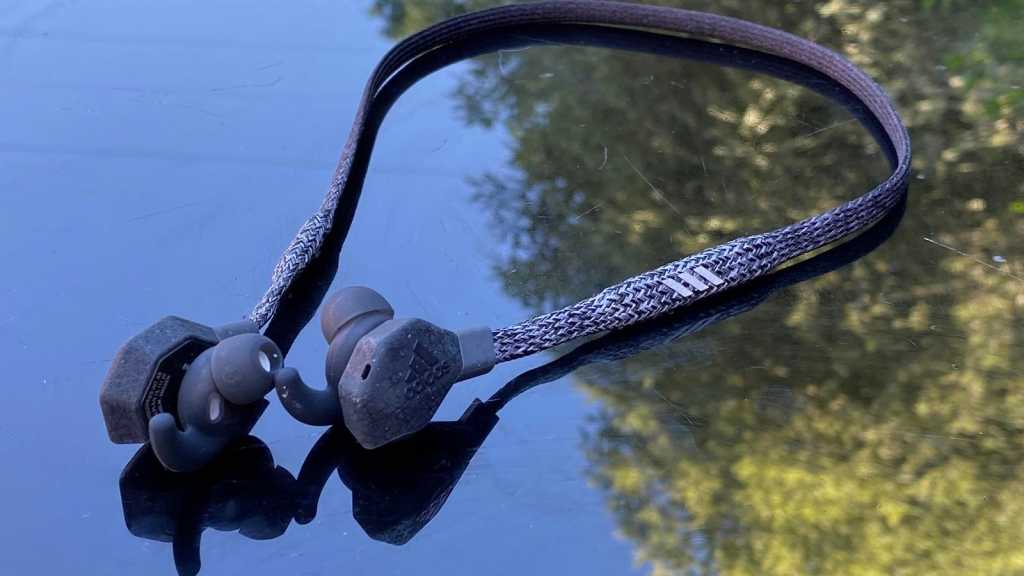 Though not a dedicated audio brand, the Adidas FWD-01s offer surprisingly good audio quality, and a very secure fit too.

Adidas may not be the first brand you think of when it comes to headphones, but it is a leader in the sportswear industry, so it makes sense for the company to dabble in the world of sport-focused earbuds from time-to-time. The Adidas FWD-01 neckbuds are a prime example of the company’s recent endeavour, offering fitness fans a secure fit with surprisingly good audio quality to boot.

Can the Adidas FWD-01s truly compete in an already full market of neckbuds, true wireless earbuds and wireless headphones? I was sceptical, but I must admit, I’m pleasantly surprised.

Design: A bulky, yet secure, fit

While some earbuds are designed to be subtle, that’s certainly not the case with the Adidas FWD-01. For one, the buds are bulkier than the competition, but that’s not surprising considering the shoelace-esque design of the low-friction knitted material that connects the buds houses little-to-no smarts. The battery, Bluetooth chip and most of the other smarts are packed into the buds themselves.

The buds sport an angular shape compared to the rounded buds used by most manufacturers, and they certainly stand out. They’re primarily dark grey in colour and covered in a smattering of light grey flecks, so much so that I actually thought the earbuds were dirty when I took them out of the box and proceeded to try and (unsuccessfully, of course) clean them up. 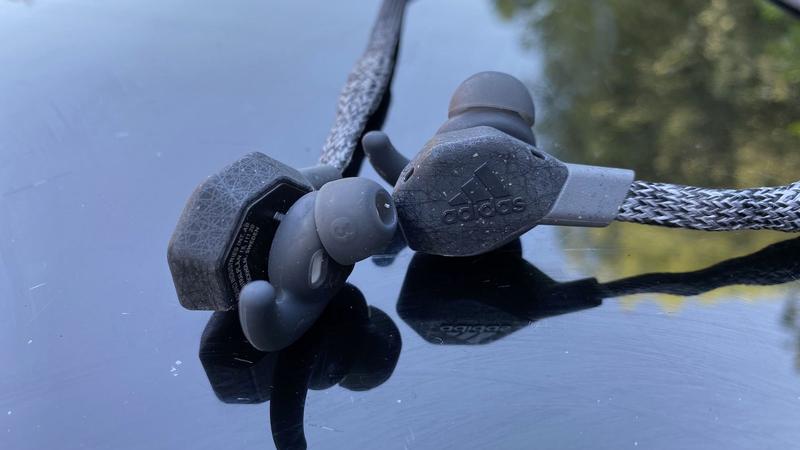 Adidas hasn’t gone down the route of including built-in media controls on the buds themselves, instead opting to include basic media controls and access to your smartphone’s virtual assistant via buttons built into the knit cable. The buttons are raised, making them easy to locate by touch, and provide a satisfying click feedback so you know the button press has registered – much better than some of the tap- or gesture-enabled controls on some earbuds.

Being fitness-focused earbuds, fit is key – it’ll not only make sure the buds stay secure when you’re out on a run, but it’ll offer huge improvements to overall audio performance too. The good news is that Adidas goes above and beyond when it comes to eartips, offering four sets of eartips and wings to help you find the perfect combination for your ears. It’ll take a while and it might be a bit of a pain, but it’s something you’ll only have to do once, and it makes a world of difference.

The lightweight 25g design, combined with the secure fit of the earbuds, mean you’ll likely never have to readjust the earbuds once you’ve put them in – and that’s not something I can say of many wireless earbuds at any price point.

Oh, and don’t worry about getting sweaty at the gym – the buds sport IPX4 water resistance, making them resistant to sweat and splashes. 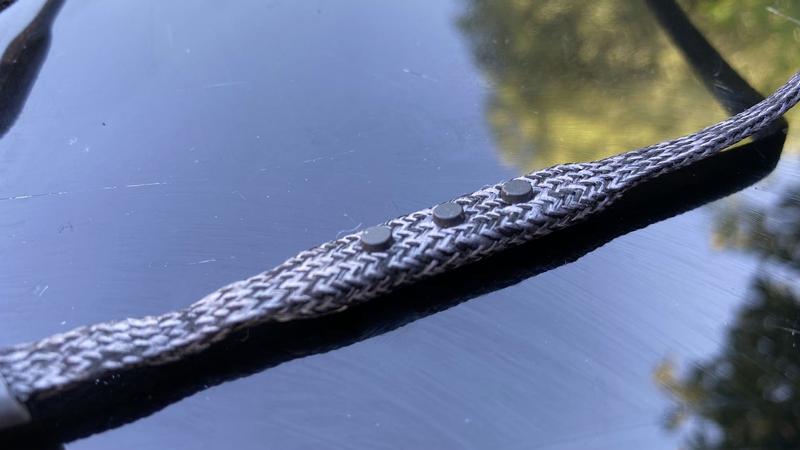 Sporting the classic neckbud design, it’s safe to assume that many will leave the earbuds to dangle around the neck when not in use, and I can say from personal experience that it’s the easiest way to lose them. The good news is that Adidas built magnets into the earbuds, allowing them to snap together when resting around the neck for a more secure fit, and it’ll automatically pause any music when connected.

It’s not quite smart enough to automatically resume playback though – if true auto pause/play tech is on your must-have list for earbuds, the FWD-01 may not be the best option for you. That said, it’s easy enough to press a button to resume playback, and the performance of the FWD-01 earbuds more than make up for it.

The Adidas FWD-01 neckbuds feature Bluetooth 5.0 technology, translating to a fairly stable connection, even in busy signal areas. Don’t get me wrong, it’s not dropout-free in areas full of wireless and Bluetooth signals, but it certainly performs better than other neckbuds I’ve used in the past, and I certainly didn’t have any issues when jogging (or what I class as jogging, anyway) around the local park.

More importantly, the audio quality sounds superb. It’s not industry-leading in the sense that it’ll take on £300+ headphones like the Bose QC35ii, but there’s a marked improvement in sound quality compared to other fitness-focused neckbuds I’ve used in the past.

The highlight of the audio is undoubtedly the bass; it’s deep, booming and powerful, perfect for keeping you motivated during intense workouts. 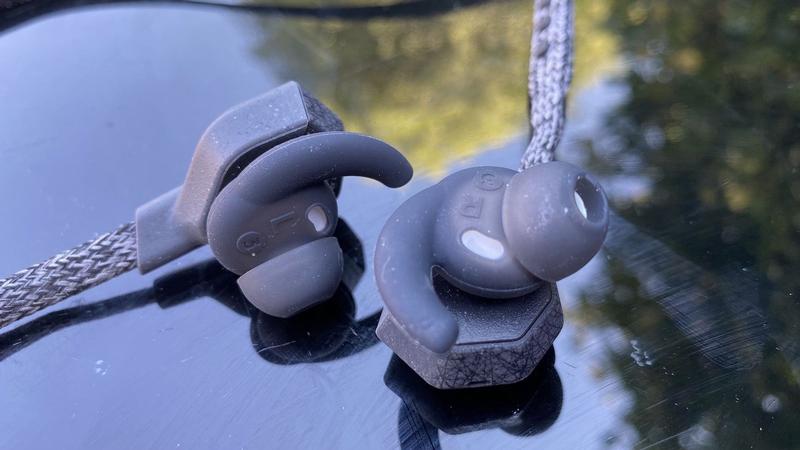 The earbuds perform at their best with bassy Hip-Hop and Dubstep tracks, but don’t let that trick you into thinking they’re only good for bassy music. Even with powerful bass, the mids and highs are relatively clear, and the great sound separation on offer is a nice surprise. You don’t get the same level of clarity here that you’d find from high-end headphones, admittedly, but it’s certainly enough to get the job done when exercising.

You’ll be able to get around 16 hours of playback off a single charge according to Adidas, and although that’s very hard to put to the test, I’d say that seems about right based on my usage. The good news is that when it does come to time to charge, the FWD-01s regain battery power very quickly – via USB-C, you’ll achieve 60% charge in only 15 minutes, with a full charge taking only 45 minutes. It’s perfect for when you need a last-minute top-up before you head out to the gym, that’s for sure!

The Adidas FWD-01 wireless neckbuds have an RRP of £129.95/$149.99, and while they’re available via Adidas in the US, they’re sold out on in the UK at the time of writing. That’s the bad news – the good news is that they’re available to buy on Amazon at a discounted £83.99 in the UK. The discounted price makes the FWD-01s a much more tempting option, beating most sub-£100/$100 neckbuds available right now.

If you’re on the market for a decent pair of neckbuds that’ll stay put even during the most intense workouts, the Adidas FWD-01s are a great option. Though the earbuds are bulkier than some of the competition, the multiple sets of eartips and wings that come with the earbuds make it easy to find the perfect fit, and they’ll stay securely in place too.

The audio performance is great, with a focus on powerful, heavy bass to help motivate you, but Adidas hasn’t neglected the mids and highs, offering a well-rounded audio performance. It’s not industry-leading, but it’s better than a lot of the sports-earbud competition. And, with a combination of a 16-hour battery and 0-60% charge in 15 minutes via USB-C, what’s not to like?