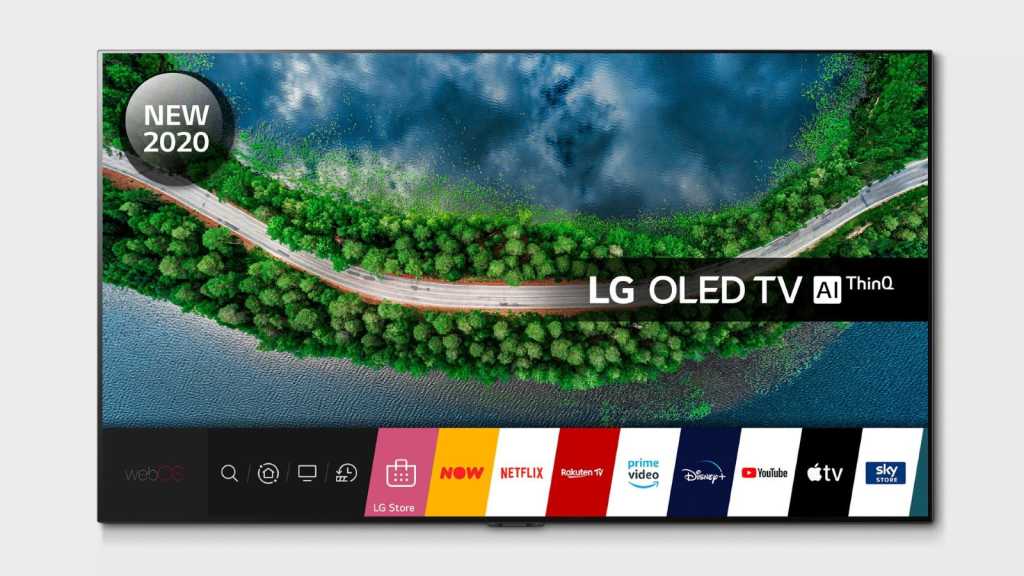 The GX OLED is the interior design star in LG’s 2020 4K HDR TV range. Its picture performance is impressive, but you’ll pay a premium for its luxurious style.

The GX Gallery OLED range stands apart from the rest of LG’s 2020 OLED line-up… by not actually coming with a stand. As its moniker suggests, the idea is this Gallery flatscreen TV hangs on a wall, rather than perched on a pedestal.

As a piece of home entertainment design, it’s absolutely beautiful. But there are caveats…

A uniform 20mm deep, the GX is a tad thicker than the average LG OLED offering, but it hangs flush and boasts a hefty onboard audio system.

The panel is framed by a 5mm micro bezel, bevelled for bonus style points and looks stunning.

While no pedestal stand comes in the box, one’s available as an optional extra, priced at £99 if you do want to mount it in the traditional way.

Smart functionality can be described as disappointing. For undisclosed reasons, there’s no Freeview Play from LG this year, which rather leaves a hole in the set’s Catch-up TV checklist.

The company tells me it’s trying to address the problem by securing standalone channel players, but the omission seems forgetful at best.

By way of compensation, you can browse the LG channels app, which offers a bouquet of miscellaneous entertainment, including archive content, eSports and special interest.

The webOS interface uses the same two-tier design seen on 2019 models, but there are changes. Out goes LG’s Bean Bird setup mascot and in comes a new Home Dashboard, which acts as a central hub for all sources.

It’s from here you can connect your smartphone, use AirPlay, or play files from USB sticks or networked servers.

Unfortunately, the Dashboard appears to have been airdropped in from another OS developer and is stylistically unconnected to the rest of the platform. Once so slick, webOS is beginning to resemble a patchwork quilt of features.

The set’s HDR delivery is dictated by your preset viewing choice. The TV peaks around 800 nits (cd/m2) in Vivid mode, but oversaturation doesn’t really make this preset fun to watch. Better to settle for 750 nits in Standard mode. Opt for the Cinema preset, though, and HDR caps at 650 nits.

New this year is Filmmaker mode (FMM), designed to provide a uniform cinematic viewing experience across various TV manufacturers; while the execution varies between LG, Panasonic, Philips and Samsung, the onscreen results all look much the same. Extraneous image processing is turned off, and screen brightness locked down.

Purists may love it, but the viewing experience isn’t for everyone. With HD SDR, content can just look dull, not least because it’s reflecting mastering standards first designed for an era of CRT display technologies. FMM does a rather better job with 4K HDR material.

Actually, I found precious little difference between LG’s Cinema preset and Filmmaker Mode. I prefer the AI-enhanced clarity of LG’s Standard mode, which has an easy edge when viewed at normal seating distances.

In addition to Filmmaker Mode, the set also offers Dolby Vision IQ, which is a version of Dolby Vision able to adjust to ambient lighting conditions. There’s no overt IQ labelling, but it’s triggered when you select the Dolby Vision Cinema Home preset.

Audio wise the set has heft. Downward-firing stereo speakers benefit from a claimed 60W of amplification, aided by an AI Sound Pro mode which makes the soundstage appear to widen and step forward.

You’ll still want to upgrade to a soundbar or home cinema system though. As the GX is Dolby Atmos compatible, it’ll bitstream Atmos out over HDMI.

Gamers are in luck. I measured latency at a pleasingly low 13.2ms (1080p/60fps) in Game mode, so you won’t be playing CoD at a disadvantage.

We reckon you’ll need quite a substantial wall to accommodate the latter!

You can buy them from the likes of Amazon, John Lewis and Currys. Plus during some of August there’s a deal for a free pair of earbuds and a half-price soundbar if you’re quick.

Before spending this much, you might want to consider the Sony AG9, the more affordable Samsung Q80T or something else from our best TV chart.

The GX is an impressive OLED TV, and its on-wall profile certainly sets it apart from rivals. LG’s new AI-enhanced sound and vision processing technologies put it in the premier league when it comes to performance.

But this performance isn’t exclusive to the GX model. The same panel and AI image technology can be found on cheaper LG OLED TVs, like the CX if this is too much for your bank balance to handle.

Smart connectivity suffers from the lack of Catch-up TV and Freeview Play. Still, the provision of 4K 120fps HDMI inputs (something missing from OLEDs by rivals Sony and Philips), make this worth a look at if next-gen gaming is a key reason to upgrade your TV.