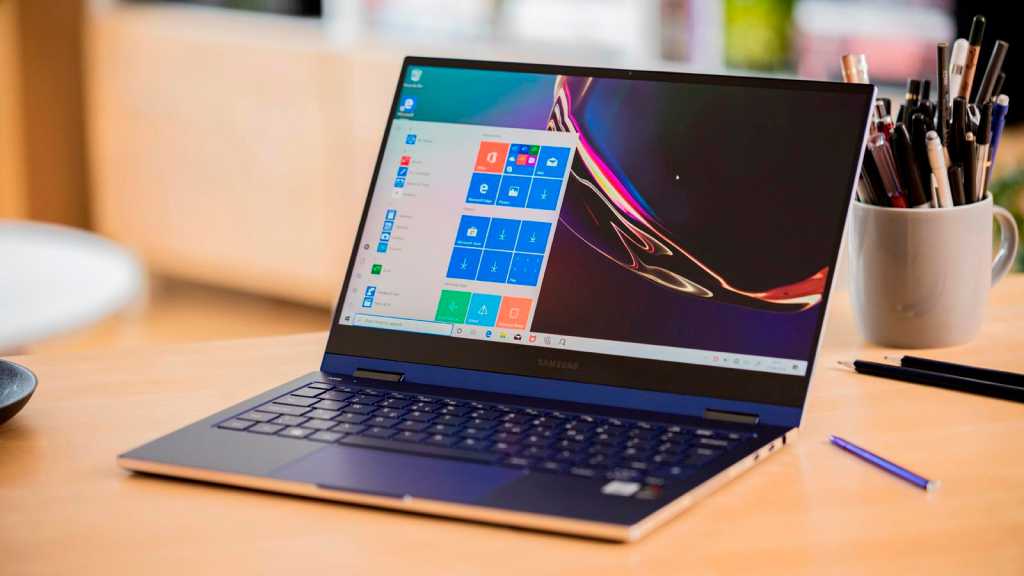 The Galaxy Book Flex is one of Samsung’s most accomplished laptops to date, and solid performance across the board makes it a real contender for everyday consumers.

With a hugely popular range of smartphones and booming TV division, it’s no surprise that a manufacturer the size of Samsung is looking to branch out into other forms of tech.

The company is hardly a newcomer to the laptop scene but has stepped up its game in recent months with a string of high-profile releases. These include the Galaxy Book S, which sports the longest battery life of any laptop we’ve tested.

As such, expectations are high for the Galaxy Book Flex, a premium Windows convertible complete with S-Pen. How well does it deliver?

As you might expect from a four-figure Samsung device, the Galaxy Book Flex screams premium as soon as you take it out of the box, while still weighing just 1.16kg.

Being able to fit a 13.3in screen in such a compact body is hugely impressive, making the Flex among the most portable laptops I’ve tested. Its stunning design is definitely enhanced by the Royal Blue model I tested, which also helps it to stand out from the crowd.

It’s worth emphasising here that the Galaxy Book Flex is a convertible as opposed to 2-in-1. It definitely feels more like a laptop that can also be used as a tablet, rather than the two modes being more interchangeable.

The consequence of this design choice is that the hinge is relatively weak. If you’re a fast typer, you’ll notice it wobble quite a bit, even on a flat surface. It also meant I was reluctant to make use of the touchscreen until I’d folded the keyboard out of the way.

However, this is by no means exclusive to the Flex, and the excellent keyboard more than makes up for it. The tactile and responsive keys made for a truly excellent typing experience, while the reduced travel meant it was extremely quiet when compared to most laptops.

One minor criticism was that I couldn’t get the function keys to perform their indicated purpose. That did make turning up the volume or adjusting the brightness a little more tedious, and from what I can tell it’s an issue other people have been having too.

Below the Enter key, you’ll find an excellent fingerprint scanner, which was easy to enrol and extremely reliable.

It’s a good job the sensor is so impressive, as the Flex curiously doesn’t support Windows Hello for face unlock. The 1080p front-facing sensor is better than most built-in laptop webcams, so it’s a strange omission here.

The Flex has a relatively compact design, so after including a full-size keyboard there’s not much space left for a trackpad. Samsung has adapted by making it wider and narrower than most, and crucially I didn’t notice any effect on the navigation experience. You might want to connect an external mouse for more precise tasks, but for general everyday usage, it coped just fine.

The power button is located on the side of the device, where it’s joined by two Thunderbolt 3 USB-C ports, one regular USB-C port, a 3.5mm headphone jack and SIM card tray for LTE connectivity.

It’s also where you’ll find the S-Pen, Samsung’s Bluetooth stylus that has become synonymous with the Note series of smartphones. It’s great to have it built-in to the device, something which is extremely rare among modern laptops.

The Galaxy Book Flex comes sporting a gorgeous 13.3in QLED display, at a resolution of 1920×1080. It’s everything you’d expect from a high-end Samsung screen and more, with rich, vivid colours and an excellent level of detail.

This can be customised to your liking across five distinct colour profiles, but I was more than happy to stick to the default ‘Auto’ mode.

I was able to record an impressive maximum brightness of 467 nits using the SpyderX Pro, more than the vast majority of modern laptops. There’s even an Outdoor+ mode in Samsung’s Settings, which can increase this even further, making working outside a real possibility. However, Samsung does warn you of the detrimental effect this has on battery life.

The display itself is housed between some extremely narrow bezels, giving it an impressive 87% screen-to-body ratio. It supports touch input, although the aforementioned hinge made me hesitant to tap away while in laptop mode.

It’s good news, then, that the Flex’s screen can rotate a full 360 degrees to suit your workflow. This is where the S-Pen comes into its own, working wonderfully on the large screen for creating digital art and handwritten notes. Using the Bluetooth functionality to navigate a presentation makes much more sense on this larger display, too.

Unlike many laptops these days, there’s only one configuration for the Galaxy Book Flex in the UK. The 10th-gen Intel Core i5-1035G4 processor is paired with Intel’s own Iris Plus graphics and 8GB of RAM.

However, it seems like a wise move on Samsung’s part, as the Flex delivers the excellent performance we’ve come to expect from the Korean company.

I subjected it to the usual rigours of my daily workflow, which include plenty of word processing, web browsing and multitasking, and the Flex barely broke a sweat. It’s similarly adept at consuming multimedia content and even some light gaming.

While it might not be able to handle graphic-intensive titles or high-end video editing, for most other tasks it should cope just fine.

As you can see from the benchmarks below, it’s extremely competitive with some of the best laptops on the market.

In terms of storage, the Flex’s 512GB SSD should be more than enough for most
It would have been nice to have a 1TB option, but only power users are likely to have any concerns.

The Galaxy Book Flex has a typical battery capacity 69.7Wh. It can be difficult to compare laptop batteries, as there are so many variables that affect how long it will last on a single charge.

Fortunately, the battery life in my testing was excellent. With brightness set to around 120 nits via the SpyderX Pro, I recorded a very impressive 17 hours and 44 minutes of looped 720p video.

It’s a step down from Samsung’s own class-leading Galaxy Book S, which recorded a staggering 25 hours and 24 minutes, but well ahead of the majority of laptops on the market.

What’s more, this can be extended depending on how much performance you’re happy to sacrifice. Windows 10’s own Power Saving mode will kick in at 20% battery, while Samsung has implemented its own Battery plus mode to give a further boost.

When the time does come to charge, you can do so via the 65W USB-C adapter included in the box. It was a similarly impressive story here, as I managed to get 46% battery in 30 minutes from off. That means you’re looking at just over an hour for a full charge.

The Galaxy Book Flex can also lend some of its battery to others via the Wireless PowerShare that’s built into the touchpad. Activated via the Fn+11 keyboard shortcut, it worked as advertised, although you’re stuck with 4.5W speed and all touchpad functionality is disabled. I’d only recommend using this when you have no alternative power source (unless you’re showing it off to friends of course).

As with so many modern laptops, the Galaxy Book Flex comes running Windows 10 Home out of the box.

I’m sure you know all about Microsoft’s operating system, so it’s probably worthing focusing on the additions that Samsung has made.

The likes of Samsung Notes, Live Message and digital colouring app PENUP have all been adapted for desktop, while there’s a dedicated app for Samsung DeX too. Check out the full selection below.

Add in the fact that Samsung devices are often first to get new features for Microsoft’s Your Phone companion app and there are some great ways to seamlessly share between phone and laptop.

Conversely, the Flex makes it really easy to avoid all Samsung software if you’d prefer. It works both ways.

As mentioned previously, there’s only one configuration for the Galaxy Book Flex, an Intel Core i5 processor combined with 8GB of RAM and a 256GB SSD.

While it might not beat those devices on pure performance, the well-rounded package offered by the Flex means it still offers solid value for money. It also feels well future-proofed, further adding to its appeal.

The Galaxy Book Flex is an ambitious step into the world of convertibles for Samsung, but it’s done an excellent job.

The 1080p OLED screen is just as excellent as you’d expect from a Samsung device, while the tiny bezels make it much more compact than most 13in laptops. Having the option to flip the screen a full 360 degrees is welcome, but it does mean the hinge is a bit more unstable than hoped.

However, that feels like a minor point, especially when performance is so solid and it has such great battery life. There’s even a decent webcam for working from home, although it doesn’t support Windows Hello for face unlock. However, the superb physical fingerprint scanner more than makes up for it.

The Flex can’t rival high-end laptops on internals, but for most people, this can be a great everyday laptop for many years to come.

Samsung has since released an updated version of this device, known as the Galaxy Book Flex 5G. Read all about it here.