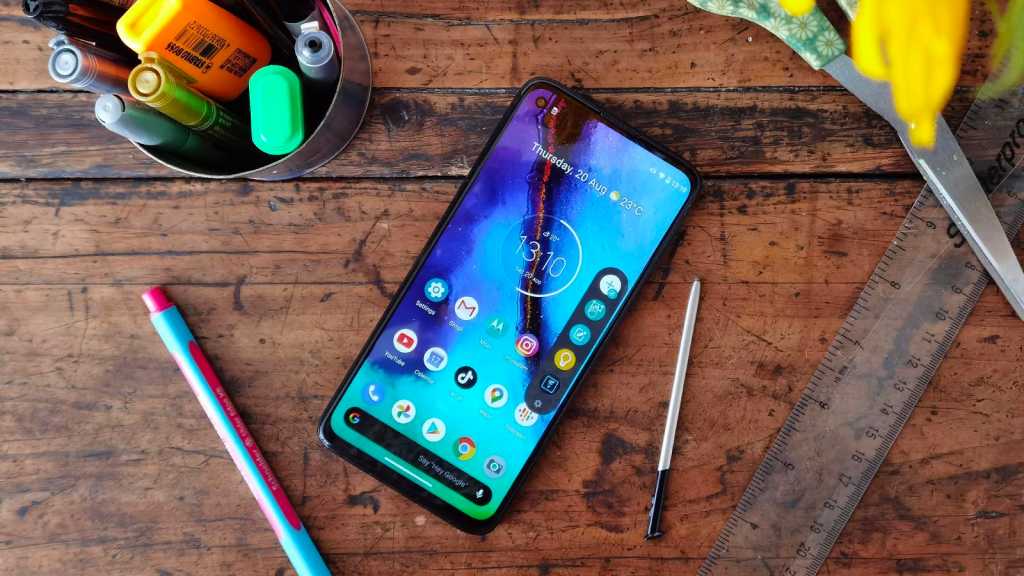 An unassuming phone, for the most part, the Moto G Pro is accented by the addition of an integrated stylus that could do more. Beyond that, it’s classic mid-range Motorola – a well-rounded package with a clean user experience and great battery life.

The stylus used to be one of the defining features of ‘smart devices’, back in the age of the PalmPilot and its reign more or less continued until Steve Jobs famously berated the peripheral while introducing the touch-driven original iPhone in 2007 – changing attitudes towards smartphone interaction, forever.

Of course, since then Apple’s – and the wider mobile industry’s – opinion of the stylus has softened, to the point that it’s been able to enjoy something of a renaissance.

While today’s stylus-toting stars are namely Samsung’s Galaxy Note range and the pairing of iPad and Apple Pencil, there’s definitely room for more players in the space, especially at more affordable climbs; a region that Motorola is exploring with the Moto G Pro.

Before we look at the hardware, there’s something to be said for that name – it’s confusing. Namely, because there’s nothing particularly ‘pro’ about this phone’s spec sheet compared to other 2020 Moto G-series phones, so we’re assuming that the ‘Pro’ here stands for ‘productive’ or ‘productivity’, rather than ‘professional’.

The G Pro’s US counterpart is actually called the Moto G Stylus – a far more apt title that didn’t stick when the phone travelled across the Atlantic, for reasons unclear. Mixed-up monikers aside though, what does the Moto G Pro actually bring to the table?

While there’s something to be said for creating a consistent brand aesthetic, we’d wager that you’d have trouble telling most of Motorola’s Moto G8 and 2020 Moto G devices apart.

Place the Moto G Pro alongside the Moto G8 and the G8 Power, and there’s little beside from back colour to easily identify which phone is which. All feature 6.4in displays with a hole-punch front-facing camera in the top left and all employ a centrally-positioned rear fingerprint sensor with the Motorola ‘M’ logo sat within it, alongside a four-piece camera setup accented by a single larger sensor at the top.

The G Pro comes with one obvious distinction, however – a stylus that slides neatly into the right corner of its frame (favouring right-handed users over lefties). The exposed end – that marries up with the geometry of the G Pro’s bodywork when docked – is colour-matched to its attractive Mystic Indigo finish (a pearlescent deep blue that fades to near black against the light), while the rest of the stylus itself is actually made of metal.

This came as a pleasing surprise considering both the Apple Pencil(s) and Samsung’s S Pen are predominantly plastic – there’s an obvious reason for this, though. Unlike these other styli, the G Pro’s offering doesn’t contain any internalised components. On the downside, this means no additional smart features – like air gestures, tilt or pressure control, or replaceable nibs – on the upside, it makes for a more resilient writing tool, that won’t flex under-finger.

Its oval cross-section sits nicely in the hand and while you’re unlikely to spend hours using it in a single sitting, it feels comfortable to use for extended periods, despite its size.

The rest of the phone

The G Pro comes with a case pre-fitted in-box and generally, there’s little reason to remove it (it’s a clear, flexible TPU offering) unless you hate the look, already have another case in mind or simply prefer your phones naked.

Case off, however, the phone sports pleasantly-thin bezels around its display (especially considering its price), a nicely-rounded plastic back for comfort, and a sturdy frame – albeit with some hard edges that aren’t quite as nice to handle.

A centrally-mounted fingerprint sensor is perfect for ambidextrous use, although it can be a little picky about getting a firm read on your print before unlocking.

Next to the USB-C port at its base, the G Pro also totes a 3.5mm headphone jack, which will likely appeal to those who aren’t yet ready to make the jump to wireless headphones.

Unlike older affordable offerings, the G Pro doesn’t require wired headphones in order for its integrated FM radio to function (although it helps) and as an extension of Motorola’s software offerings, you’ll find Moto Audio in the apps drawer.

This gives you Dolby-tuned audio profiles, suited to scenarios like ‘Film’, ‘Music’ and ‘Game’ that you can flip between, depending on the context.

It works across the phone’s own loudspeakers, remotely-connected speakers and headphones; granting you an optimised audio profile with a tap or the option to customise sound with an impressive level of granularity. There’s also a ‘Smart’ option if you’d rather not fuss with EQ settings at all.

It’s worth noting that the phone packs a pair of stereo loudspeakers that, although not earth-shattering (they deal out some pretty flat sound that shouldn’t really be pushed too hard during media playback) are a nice inclusion on such an affordable device.

As for the display, the 6.4in Full HD+ IPS LCD offers a pleasant amount of real estate on which to work when using the stylus, pushing out pleasing colours and solid overall brightness. It appears a little on the cool side by default, though, which can only readily be rectified by using the Night Light feature (intended to reduce eye strain during evening/low-light viewing) as a stand-in for proper colour temperature controls.

Contrast and brightness also suffer the moment the screen is viewed off-angle – seldom an issue when using the phone normally but a potential problem when you’ve set the G Pro down on a table to write notes with the stylus or, more importantly, attempt a bit of illustration.

A stylus experience that could have been more

The Moto G Pro is an Android One-based device, meaning it sports Motorola’s already-excellent near-stock take on Android 10 but also comes with the guarantee of prompt app, software and security updates direct from Google, without question.

Moto Audio is just one aspect of Motorola’s various software tweaks and additions; none of which make the user experience feel cluttered. You’ll find a myriad of handy gestures – called Moto Actions – to access things like the camera or torch instantly (all of which work reliably), as well as more nuanced experiences.

Moto Display’s adaptive on-screen media controls are always appreciated and additions like Moto Gametime offer control over notifications and companion apps that gamers might find useful while in-game, such as Discord. Then there are the stylus-specific additions, which could be described as ‘barebones’.

Motorola gets the fundamentals right, with quick access to the Moto Notes app by pulling the stylus to jot something down when the phone is locked, alongside a customisable shortcuts menu with room for up to four quick-access actions and/or apps.

One subtle alteration to Gboard – Google’s native Android keyboard – is that instead of featuring a button that takes you straight to your emojis, on the G Pro it defaults to a handwriting input field for use with the stylus. Better yet, handwriting recognition isn’t terrible – although not the preferred way to input text on a smartphone in 2020.

I just wish that Motorola had done more with the stylus to really make its inclusion worthwhile; additions that could have been powered by existing software. One of the fundamentals being handwriting-to-text, which would have added far more power to the G Pro’s note-taking capabilities.

Shape detection – to create recognisable forms from misshapen squiggles – would have been great for diagrams and illustration, and Google-powered translation using the stylus as a means to highlight foreign-language text, all seem like features that could have been implemented without the G Pro’s development team having to jump through too many hoops.

There’s a chance that Motorola could append new capabilities such as these to the software via future updates but considering the G Pro’s standing in the lineup, this seems unlikely.

Considering the pricing of the Moto G Pro, you need to temper your expectations with regards to the stylus’ performance. Latency is wholly useable but you’ll see and feel a notable delay between what you write or draw and its appearance on-screen, especially when moving the stylus quickly – an Apple Pencil this is not.

As for the wider phone experience, Motorola has ensured that the G Pro feels perfectly comfortable in day-to-day use. It isn’t going to multitask with lightning-fast responsiveness and demanding experiences like the camera app take a fraction longer to load than they would on something beefier, like the Motorola Edge, but such speed is above the G Pro’s price tag and it’s not a sluggish phone, considering its price.

Humble hardware usually results in respectable longevity and the G Pro is a great performer in this regard – clocking in just over 11 hours in our PCMark battery benchmark. It also supports 15W fast charging, which takes around two hours to fully replenish the phone’s 4000mAh cell – not exactly blistering but, like the phone’s general performance, comfortably liveable.

I was surprised by the abilities of the G Pro’s primary 48Mp sensor. Dynamic range is above what I’d expect for a phone at this price point and in natural light, both colours and quality bokeh can be found in most shots.

You can get much closer to your subject with the latter, which has value, but the image processing and degradation in quality, if you dare to crop in even a millimetre, is too severe for my liking. Capture a shot using the main snapper from further back and zoom in afterwards and you’ll likely get a better photo.

Night Vision makes otherwise unusable scenes Instagram-worthy, while the more advanced features like Spot Colour and Group Selfie are fun, creative extras that add value, even if they’re unlikely to see frequent use.

As for the 16Mp ultrawide sensor, it’s strange that there’s no dedicated way to switch to it when shooting stills but the ability to shoot decent wide-angle 1080p video while holding the phone in-portrait is a feature I wish more phones had.

The Moto G Pro costs £289.99 making it the second-most expensive member of the Moto G/G8 family right now after the Moto G 5G Plus. Based on its spec sheet it sits neatly between the Moto G8 and Moto G8 Plus.

It’s available to purchase from Motorola’s official website, as well as approved online retailers like Amazon and in the UK specifically, the likes of John Lewis too.

For the price, the Moto G Pro is a well-rounded, affordable mid-range device; with a pleasant design, functional everyday performance and a considered user experience. Motorola could have done more with the stylus but it meets the basic needs of anyone after what is to be considered a niche feature.

In a strange sense, the Moto G Pro is effectively unrivalled; the most obvious alternatives taking the form of the newly-launched Samsung Galaxy Note 20 and Note 20 Ultra – with their signature S Pen, but these are both flagship phones with price tags three-to-four times larger than the one attached to the Pro.

If you decide you don’t actually care enough about the stylus, after all, the aforementioned members of the Moto G8 family, as well as offerings like the Realme 6 Pro, will grant you a tad more bang for your buck.