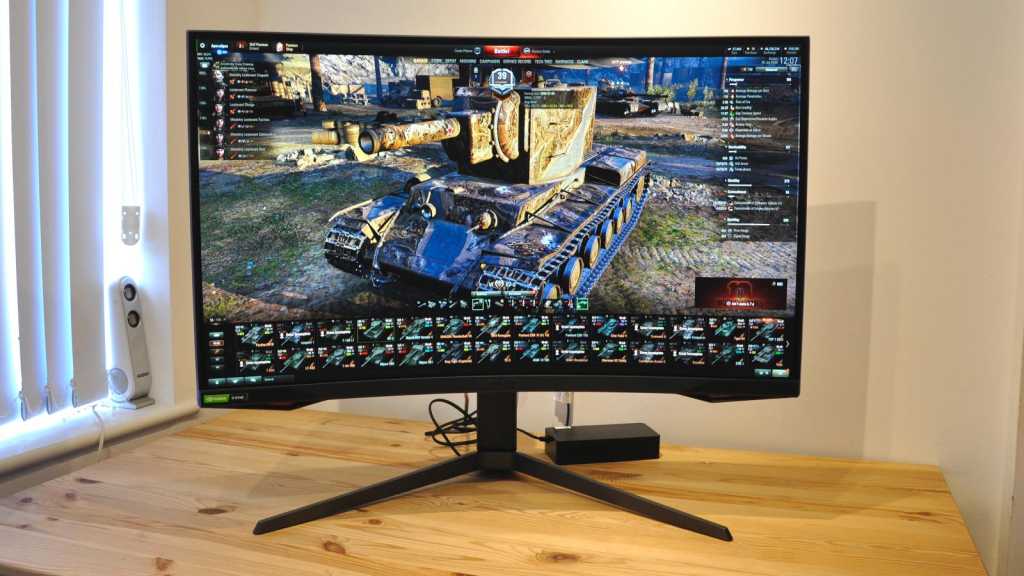 VA panels have never been this fast, colourful or curved. It might be a little awkward to assemble, but the Samsung Odyssey G7 delivers a big, bright and attractive gaming screen that gives a highly immersive experience.

The market for gaming displays appears to be fragmenting. Some gamers want the best colours and contrast on an ultrawide panel, while others are more interested in refresh rates than crazy screen ratios.

The Samsung Odyssey G7 is an attempt to provide something for all tastes, with a 31.5-inch 16:9 ratio design that sports a dramatic 1000R curve.

Where LG demonstrated recently with an UltraGear panel how far it is possible to push IPS screen technology with the Odyssey G7, Samsung counters by merging its quantum dot TV technology with a VA panel design.

On paper, this looks like the dream display for many gamers. It’s bright, colourful, has minimal refresh lag and the extreme curvature offers a high degree of player immersion.

When you combine the technical specifications with a highly competitive price, Samsung looks like it might have the product to dominate this sector in 2020.

Curved screens can be something of a nightmare to unbox. They inherently have a centre of gravity that isn’t inside their volume, and as such, you cannot hold them under the rotational centre.

Samsung did its best to help the new owner with an elaborate set of instructions advising how best to deploy this screen without damaging it, or yourself.

What sound advice Samsung recommends, is to remove the top foam tray of accessories and support arm parts and then attach the arm to the face-down panel before removing the whole assembly when completed from the bottom of the box.

The support arm foot attaches with a thumbscrew at the bottom, but you need a crosshead screwdriver to connect the arm at the screen end with four captured screws.

One word of warning for those that don’t read the instructions carefully; the support arm has a plastic sheath over it that serves as a conduit for cables in use, remove this before picking up the panel by the stand. Failure to realise that this cover slides off could result in you dropping the monitor unexpectedly.

Once you’ve got the monitor placed, you can put the cable cover back on, and also add a doughnut-shaped trim to cover the mounting point to the screen.

Once you’ve attached cables and the enormous power brick, you are, at last, good to go.

We’ve become used to seeing TVs and monitors that are ultra-thin, and therefore it comes as something of a shock to see a product that isn’t.

But realistically, with a curve of 1000R, this design could never be thin due to the degree of arc needed to make such a tight curve. As the term 1000R implies, the focal point of this curve is just one metre away from the screen, a typical distance that most gamers will sit from a display of this scale.

For those interested, the circumference of a circle is equal to Pi multiplied by the radius, and therefore a wall of G7s would be 3.14 metres long. As the screen represents roughly an 80cm wide segment of that arc, then you would need forty of them to create a full 360-degree circle of panels.

But one curiosity of the Samsung Odyssey G7 is that it is possible with the provided stand to use this panel in portrait mode. It looks a little odd, mostly because the screen only bends in the single plane, but it can offer this mode if you use it.

Along with rotation, the support arm can also tilt, but it doesn’t twist, disappointingly.

A metal adapter is in the box that enables a VESA 100 compliant arm or wall mount to be used instead.

All the connections are well spaced in a section at the rear that spans across underneath the support point, and a flimsy plastic cover is provided to cover them over.

We don’t like these types of covers for multiple reasons; they get easily broken, lost, and they’re a pain to remove if you need to re-cable. Yes, they make it all look neat, but we’d rather makers avoided them.

As was mentioned earlier, the cables can be passed through the vertical support arm which has a detachable cover. Better thinking than the port cover, but the channel is narrow considering that it might have two DisplayPort, an HDMI, three USB lines, an audio line and the power cable all running through it.

Control for the OSD is via a small centrally mounted joystick that avoids all the buttons older designers loved, and from that menu, you can activate the inbuilt lighting system.

Small lights are placed beneath the screen on the left and right almost like car headlights, and in a ring around the mounting point at the rear.

We’re not a huge fan of lights you can’t see from the paying seat, but these are at least subtle. And, the front-facing do confirm that the mode and colours are correctly set.

But enough of the external details, this monitor is all about that fantastic screen!

Quantum Dot tech in a monitor

Samsung has used the same Quantum Dot technology on this display that its deployed on TVs, and the panel here is a 10-bit panel (8 bit + FRC) allowing for an impressive colour gamut.

But it isn’t purely amazing colours on offer. This panel can also deliver 1m (GtG) response at 240Hz with a natural screen resolution of 2,560 x 1,440.

To get the most from this configuration requires DisplayPort connection, although HDMI input is available for those using consoles or other external output devices.

A PiP (Picture-in-picture) mode is available, allowing more than one input to be shown at once.

One interesting fact about this screen shared by Samsung with us is that the decoding electronics can accept 4K signals, which are scaled to display. As useful as this might be for playing 4K Blu-rays, for example, we don’t recommend you use this feature from a console or computer since it will introduce display lag and increase power consumption.

If you intend to use 4K output regularly, then this probably isn’t the monitor for you.

I’ve already described how easy to assemble and cable this screen is, and the thinking behind other aspects are generally well-considered.

The OSD is accessible from a joystick that is mounted just behind the LG logo in the centre of the bottom edge. It’s an easy to navigate interface and makes input selection or changing to one of a wide range of presets is extremely easy.

One slight oddity is that the top-level menu appears directly above the centralised button, and from here there are five sub selections. These options include exiting the menu and powering off the monitor.

Most of the options lead to a menu that appears in the same place, bottom centre, yet the one with the most on it ‘settings’ appears on the extreme right.

That seems silly, since you are looking at a specific part of the screen, and then the sub-menu pops up 17 inches to the right from where you are currently focused.

However, it is worth noting that LG has created a software menu system for both PC and Mac that has everything on it that the inbuilt menu offers, and some additional options.

One trick that software menu can do is to change preset based on the application being used, enabling games to use the perfects settings for them, and then switch back to a different mode when exited.

This mechanism is significantly more user-friendly than manually selectable options and makes it more likely that users will use presets. The first two of these, Gamer 1 and Gamer 2 have more customisation available than the other choices, but there is no ability to create new presets from scratch.

That’s slightly annoying for those that want the best colour accuracy. Because that comes with the sRGB preset, and yet that option has limited adjustment controls.

This software can also predefine splitting of the display and picture-in-picture for the simultaneous presentation of multiple inputs.

Some of the features require that the monitor is connected by USB to the controlling PC, like updating the monitor firmware, but many require a DisplayPort cable connection.

Our road to getting the best out of this display had the odd pothole, as it transpired that our DataColor Spyder calibration sensor didn’t care for our selection of sRGB mode, Nvidia drivers ran in 8-bit colour at 240Hz, and variable sync also had an impact.

As it has a 10-bit panel (8 bit + FRC) with Quantum Dot, it can produce much better 444 colour representation, if configured correctly.

Once these points were addressed, we got to experience the massive colour gamut that this panel can offer, where DCI-P3 was represented by 95%. That’s a range well beyond the defined scope of sRGB. In addition to the excellent colour gamut, this screen has a VESA DisplayHDR 600 rating, and not the usual VESA DisplayHDR 400 that the majority of better gaming panels are now offering.

To achieve this rating requires that the brightness of the panel achieves 600 nits, if only locally. And, it can control its localised backlight, and for limited periods hit those brightness levels.

A highlight of this design is that it is both FreeSync and G-Sync capable, allowing for fluid frame rates up to the maximum 240Hz. However, we should point out that you will need a powerful GPU and CPU combination to drive a 2,560 x 1,440 resolution display at 240 fps.

For more modest rigs, limiting the refresh to 144Hz might be a better option.

We have seen alternative designs promoted as being colour accurate that can’t achieve this gamut or the contrast levels. While it might not compete with the contrasts levels of an OLED TV, for gamers, it’s a significant improvement over what was considered the best less than a year ago.

After the disturbingly high cost of the recently reviewed LG UltraGear 34GN850 (£969.95), we were pleasantly surprised to discover that the Samsung Odyssey G7, aka the C32G75T, is at least 20% cheaper in the USA, even if it isn’t an ultrawide design.

That’s a similar price to the AOC CU34G2X, but cheaper than the Acer Predator Z35P and the Alienware 1900R 34.1. But, importantly, none of these alternatives is offering 1000R curvature, and many don’t have 240Hz operation either.

For the moment, the Samsung Odyssey G7 C32G75T is in a special category, joined only by its 27-inch smaller brother, the C27G75T.

For alternatives to Samsung’s option, take a look at our selection of the best gaming monitors.

As the successor to the C32HG70, the Odyssey G7 is a significant upgrade in image quality and user experience.

Assembling it is an overly elaborate exercise, but most owners will only need to do it once.

Where it mildly disappoints in that it has a colour gamut that could easily have a business application, but there aren’t the controls to adjust it sufficiently for those customers. Maybe Samsung should consider a G7 for business customers that removes the coloured lighting and adds better firmware controls.

The 1000R curve takes some adaptation and encourages the user to position themselves more precisely, but it is immersive when you sit in the ergonomic sweet spot.

But these are minor points, and the underlying technology and execution on the G7 are as good as we’ve seen from Samsung recently. And, at this competitive price, these are likely to fly off the shelves.