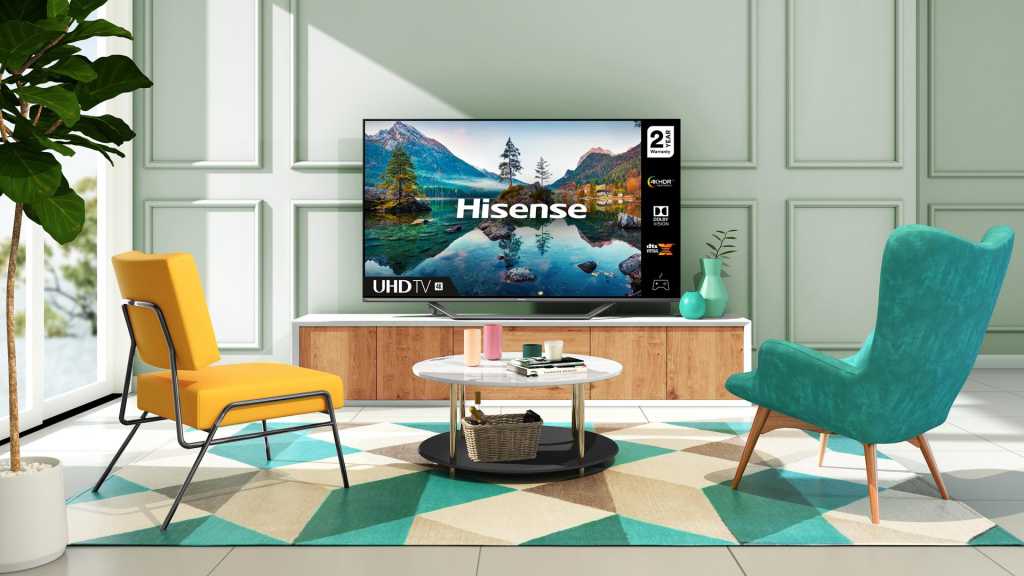 Hisense presents yet another good value 4K HDR TV with a simple and effective operating system. It’s a vibrant picture as long as you’re ok with limited contrast and viewing angles.

Offering Dolby Vision HDR with a wide colour gamut able to make the most of native 4K sources, including 4K Blu-ray, this sub-ULED Hisense A7500F hotshot is targeting the sweet spot between value and performance.

Factor in the brand’s no fuss Vidaa smart TV OS, here in fourth generation guise, and it quickly becomes a model to short list.

Build quality may not feel particularly premium, but when it comes to design, the A7500F is nicely turned out. It has a seamless unibody (one-piece) chassis, with thin grey micro bezel and a central stand with integrated cable management.

The latter is powered by Deviant Art and gives you a gallery of images to stare at. The Free button takes you to curated YouTube content, while Media offers file playback from connected network devices.

The set runs Hisense’s own Vidaa smart platform. Much like Philips Saphi system and the Vestel designed Toshiba platform, it’s relatively lean and mean when it comes to features, but whipcrack fast to use.

This fourth generation version features a new launcher View bar, which puts key apps on display. If you want to access catch-up TV or chill with some top tier streaming, it’s more than up to the job.

Netflix is tightly integrated, in so much that you can launch straight into your profile from the Vidaa homepage.

There’s some smart home control too, through Amazon Alexa and Google Assistant. Once connected you can voice command power, channel choice or input and volume.

The latter is automatically triggered when sports content is detected, but is easily fooled (Bradley Walsh set is off while I was watching The Chase).

There’s also an Auto option which appears to trigger data collection for smart advertising and is not related to image quality at all. Standard would be my go-to image preset recommendation.

Image interpolation is variable, and comes with a Custom setting with user definable judder and blur reduction. It’s quite effective at reducing typical LCD motion smearing.

HDR performance benefits from the provision of Dolby Vision, which manages tone mapping, but even so this isn’t a light cannon.

I measured peak HDR brightness at 350 nits. While the set doesn’t really ping out bright highlights, like lights, headlamps, fireworks etc, it does have a good overall brightness level.

Contrast is an issue though. With no local dimming, the image flattens when there’s not much tonally onscreen to work with (this seems most notable during movies).

Off angle viewing is also limited, with colour and contrast dropping dramatically when viewed from the side.

Hisense has clearly made huge strides when it comes to gaming performance. The A7500F, with Game mode engaged, delivers an input lag of 11.1ms (1080p/60fps), which can be considered excellent for an LED TV.

The set has a range of audio presets, including Standard, Theatre, Music, Speech, Late Night and Sports. Stereo separation is quite pronounced, and there’s enough volume to entertain during action movies.

The 50in A7500F on the test bench sells for £449. While there are even cheaper 4K options to be found in the wild, this still remains a highly competitive price.

If you’re looking for something more bijou, it has a 43-inch A7500F cousin, priced at just £399. Both are available from John Lewis.

The A7500F is positioned directly below Hisense’s entry-level ULED screen, the U7QF. In addition to that Vidaa smart OS, Freeview Play ensures all the main channel catch-up TV players are on-board. Navigation, even during the early set up screens proves fast and intuitive.

As well as sort of competing with itself due to the Hisense Roku TV and B7500, the A7500 goes up against the likes of Toshibas U29 and the JVC Fire TV Edition.

Check out all the rivals in our best smart TV chart.

Image quality though is a mixed bag. High levels of detail and wide colour are key attractions, and Dolby Vision HDR is welcome, but contrast and black level performance are limited. Off axis viewing also results in a loss of colour, so position in your living room accordingly.

Smart connectivity may be basic, but the Vidaa UI knows what you want and doesn’t get in the way. The integration of Netflix is particularly good.