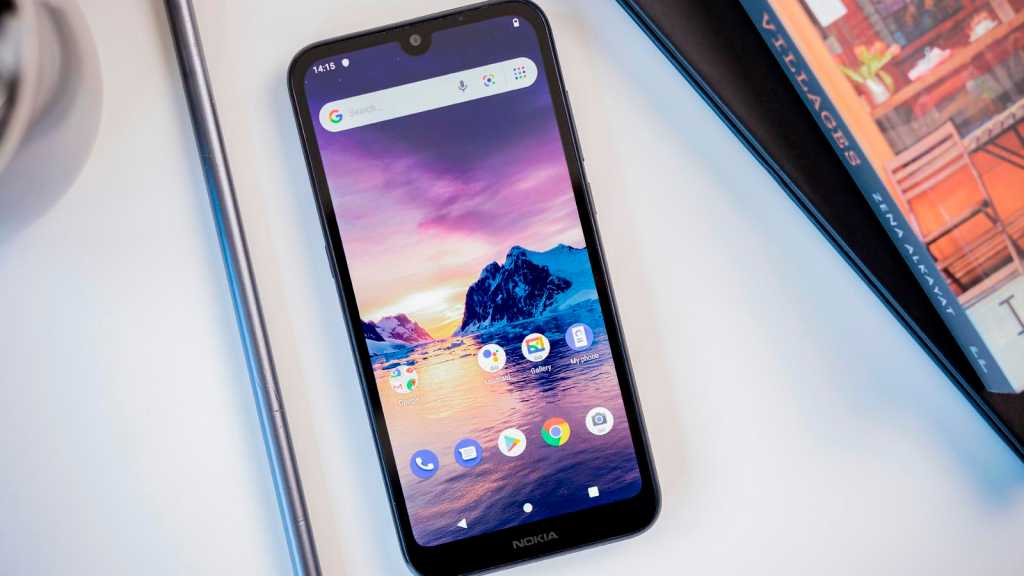 The Nokia 1.3 might look like a bargain at first glance and even in the hand, but there’s little point getting a phone that suffers from such painful performance issues.

Need a cheap phone, like a really cheap one? Well the Nokia 1.3 looks like it might be the best smartphone under £100 with its better than expected screen and battery life inside a compact design.

However, frustratingly poor performance means that those things don’t matter too much and you’ll be better off elsewhere.

There’s little to say about the Nokia 1.3 design because this is one of the most plain handsets around. Well in the Charcoal model I tested anyway – the Cyan and Sand are far more interesting.

It looks a little dated and won’t be turning any heads down the pub, but that’s hardly surprising given the cheap price of the phone.

At the front you have a small Nokia logo at the bottom, fairly chunky bezels around the screen and a small notch to house the front facing camera. That’s about the only indication that this isn’t a phone from a few years ago.

That and the more subtle inclusion of a third button, which is dedicated to summoning the Google Assistant.

Probably the most interesting thing about the design is that the plastic rear cover comes off, which is extremely rare these days. Instead of inserting a SIM or memory card via a tray, you’ll need to take the back off instead.

The issue is firstly that this isn’t obvious as there’s no notch or similar to get some purchase. Some paperwork in the box simply says to remove it starting at one corner but I found it nearly impossible and almost broke a fingernail trying to unclip the cover.

If not some kind of notch in the plastic, a tool should be included in the box. Once you do get it off, you can access the card slots as well as the battery, which is removable – handy if you like to carry a spare.

If there are some good things to say, it’s that the Nokia 1.3 is a compact handset which is hard to find these days. It’s about the footprint of the Google Pixel 3, although thicker and a little heavier.

A 5.71in screen is the main reason for the Nokia 1.3 being one of the smaller smartphones on the market and I’m pleased that it’s still just about an option for those not wanting something over 6in, which is now the norm.

The display is the best hardware element about the phone with the kind of credentials you might not expect at this price. It’s an IPS panel so has good viewing angles and the HD+ resolution over this size results in a pixel density of almost 300ppi – the same you’d get on an Amazon Kindle so that’s not bad at all.

The Nokia 1.3’s screen has soft colours and contrast isn’t too bad either. More importantly, it has a decent amount of brightness when you need it.

This might well be your first phone with a notch – the way the screen curves around the front camera – and you might be apprehensive about it but you’ll get used to it quicker than you might imagine.

It’s all well and good having a nice display, but without the performance to match you spend most of the time waiting for said display to load something.

HMD (the firm behind the Nokia brand these days) would have been better off spending on other areas and putting a lower-grade screen in.

This low-grade chip combined with just 1GB of RAM is anything but the speed needed for smooth operation, despite the phone running the ‘Go edition’ of Android 10 – which I’ll talk about later.

I haven’t been able to get any benchmark apps to run to the point of returning a score and that says a lot about the performance already.

Even if you don’t care about benchmark scores, the real-world performance of the Nokia 1.3 is the worst I’ve seen in quite some time.

While the phone has moments of feeling almost smooth, it’s short lived and I lost count of the times when things would take north of five or even 10 seconds to be completed. And I’m not talking about loading some intensive game, sometimes just waiting for the keyboard to pop-up so I could type something.

A handful of times the phone completely froze telling me “the System UI isn’t responding”. This kind of sluggish performance just leads to frustration – second clicks when you think the first was never registered etc – and ultimately a lack of trust in the device.

This is a very cheap phone so performance is bound to be slower than more expensive rivals and if it was just an occasional wait then I could accept it, but sadly it’s too frequent and therefore a huge reason not to buy the Nokia 1.3.

The above performance issues are despite the Nokia 1.3 running Android 10 (Go edition), which in a nutshell is a basic version of the operating system tailored to run on cheaper devices due to the more basic specs.

It’s sort of the bare minimum in many ways as you’ll see ‘Go’ versions of most apps pre-installed on the phone. Some of these, like Maps Go, aren’t even apps and simply run in Chrome.

You do get some of the features of full Android 10 like dark mode but there’s a lot missing too like navigation gestures and widgets so you can’t even put a clock on the home screen.

While these Google apps run better than the full versions, there aren’t many ‘lite’ editions of big name apps out there apart from Facebook and Twitter.

Even with the Go or Lite versions, the performance just isn’t fluid enough.

If you do decide to bear with the performance issues, then you will get updates to Android 11 (Go edition) and beyond.

I found battery life on the Nokia 1.3 to be very good. There’s a 3000mAh battery which in my testing can last more than a day – although this is partly down to giving up on it for various tasks due to the performance and resorting to a laptop instead.

Being this cheap, it’s no surprise that there’s an older Micro-USB port and no fast charging on offer.

The plus point here is that the battery is removable if you want to carry a spare.

The photography skills of the Nokia 1.3 seem like a bit of a moot point at this stage of the review but there’s a single 8Mp camera at the rear with an LED flash and a 5Mp front facing camera for selfies – both of which are capable of shooting basic 720p video.

While the Nokia 1.3 is capable of taking some images worthy of posting on social media, these are a little too few and far between. Generally speaking, quality is low which is to be expected for a phone this cheap.

However, it’s often a bit of a mission just to get even that with how slowly everything runs. It’s easy to miss a moment due to the delay between pressing the shutter button and the photo actually being taken.

So unless you’re taking landscape photos and have plenty of patience then this isn’t the camera for you.

Nokia touts ‘powerful AI low-light imaging’ but the low light sample I took speaks for itself really. There’s also a portrait mode but this only works on faces and I struggled to get it to work.

The selfie camera isn’t too bad and can result in occasionally nice shots, again if you can be bothered to bear with how long it takes to get one.

Coming in at just £79 (US$99), the Nokia 1.3 is one of the most affordable smartphones you can buy. Our upper cap for a budget phone is £250 so you could call this uber-budget.

You can buy it from Amazon, Argos, Currys and Very.

There’s very few smartphones that come in at under £100. However, Motorola’s Moto E6s is a closer rival at £99. In the US, you can get the regular Moto E6 at a reduced price of $99.

You will also want to consider the Xiaomi Redmi 7A which is also available for £99.

If you’re budget isn’t super tight then you could consider devices like the £169 Motorola One Macro or the firm’s own Nokia 5.3, which is £149.

If you’re looking for an extremely cheap smartphone then the Nokia 1.3 will look like an attractive deal.

Although it’s got a screen much better than you might expect at this price, solid battery life and a compact design many will find a boon compared to so many huge handsets, there’s an issue we can’t really look past.

Those good points are all pretty pointless when the performance is as slow as the Nokia 1.3 is able to offer.

Occasional lag would be acceptable at this price, but it’s just too frequent and exaggerated – even when using Go and Lite apps – to recommend this phone when there are better alternatives for not much more money.