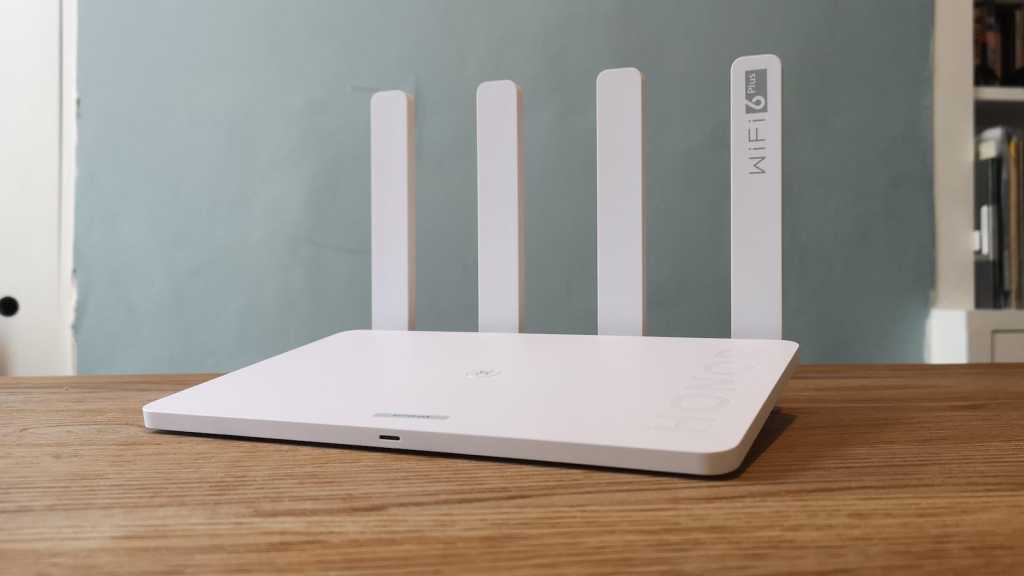 A fairly basic router, but one which offers excellent speeds, especially considering its low price.

The Honor Router 3 is a budget router from Huawei’s sub-brand you might be more familar with for phones like the Honor 9X Pro. In addition to being cheap as chips, it’s lightweight, simple to set up and can be managed easily from your phone.

Specs-wise, the Honor Router 3 brings dual-band Wi-Fi 6 with beamforming technology to the party, meaning that multiple phones, tablets and laptops ought to be able to enjoy fast speeds all throughout the home.

Typical features like Guest Wi-Fi and parental controls are along for the ride, and there’s also support for IPv6, if you want to embrace the future of the Internet, and UPnP, if you’ve got a lot of networked devices in the home already.

While Huawei is in the news again for some not-so-good reasons, note that the hardware restrictions only apply to backhaul network gear; consumer devices like this router and the latest Huawei phones aren’t about to stop working because Whitehall’s at loggerheads with Beijing.

Geopolitics aside, let’s see how the Honor Router 3 fares in the real world.

NOTE: This router does not have a built-in modem so isn’t suited if you get your broadband over a phone line. It’s designed for cable broadband, but can also be used with a separate ADSL/VDSL modem.

The Honor Router 3 is literally one of the lightest routers going. It weighs a mere 379g, takes up 41 x 242 x 152mm of shelf space, and features four Gigabit Ethernet connections – one of which you’ll need to use to connect to your modem, so in practical terms, you only get the use of three.

Cleverly, you can use any of the four ports on the back to connect the Honor Router 3 to your modem. Typically, routers will feature a designated WAN port, which can make things tricky if space is tight, so at least you get a degree of flexibility here. There’s no USB port, so there’s no way of connecting any cheapy portable hard drives to the Honor Router 3 – go NAS, or go home.

The Honor Router 3 is light in terms of design, too. Unlike a lot of routers which opt for a menacing sharp-cornered look, the Honor Router 3’s white plastic edges are smooth quarter-circles.

The action of the posable aerials is nice and gentle, although they only flex forwards and backwards, and can’t be pushed any further back than fully upright i.e. perpendicular to the desktop. Turns out this is largely for show, as they’re designed to be permanently upright – depending on how much tweaking and antenna posing you like to do in order to fine tune Wi-Fi reception, this may not be a bad thing.

There is just one LED on the front of the Honor Router 3, which will make at-a-glance diagnosis of problems hard, although you can manage the router from your phone with either the Huawei SmartHome app (iOS), or the Huawei AI Life app (Android), so a quick look at your phone should be able to tell you what’s up.

As with the similarly-priced Tenda AC10U router, there is no integrated VDSL modem here, so if you’ve signed up for any Fibre to the Cabinet (FTTC)-based services, you’ll have to pick up an Openreach modem. Virgin Media customers will also need to enable Modem Mode on their supplied router, unless they already have a separate cable modem.

The Honor Router 3 is easy to get going, thanks to the easy-to-follow instructions and visual prompts that guide you through the process. You can set everything up using your phone if you want to, but you’ll likely be more comfortable using a laptop to get everything up and running via Ethernet.

When you first connect to the Router 3, you’ll be invited to set up new SSIDs. You can opt to split both the 2.4GHz and 5GHz signals, or have the Honor Router 3 automatically switch devices over to 5GHz connections when signal strength is equal to that of the 2.4GHz band – so in practical terms, you’ll be automatically shunted over to 5GHz when you’re closer to your router.

This will have the twin effect of moving you to the fast lane, while making room in the perma-busy 2.4GHz band for devices that can’t or won’t connect to 5GHz.

The Honor Router 3 promises maximum wireless speeds of 3000Mbps (3Gbps), but only devices with the latest Wi-Fi 6 (11ax) radios will be able to achieve this.

A lot of phones and laptops won’t have this yet, as Wi-Fi 6 is still relatively new. Honor appears to have taken this into consideration, as during set-up, you can configure the router to broadcast additional Wi-Fi 5-only SSIDs, for the exclusive use of older devices.

Once you’ve chosen the names for the SSIDs, you can create passwords for them as well as set the admin password. Then you’ll be asked to pick your connection type from the usual list, PPPoE, DHCP, Bridge AP, or Static IP. Custom DNS settings can be entered at this stage too.

The control panel of the Honor Router 3 gives you an overview of all the devices on your network, the ability to limit or shape the connections.

Dig deeper and you’ll find toggles for the built-in Firewall, UPnP, and IPv6, menus for Port Forwarding and VPN (Virtual Private Network) settings. There are also some quite rudimentary parental controls, as well as the usual security settings, like the ability to change passwords, set Wi-Fi timers and create a Guest Wi-Fi network.

There’s also an IPTV setting you can enable if you’re having issues getting multicast TV content working with certain set-top boxes. I was able to access VOD content on a Sky Q set-top box through the Honor Router 3 with minimal hassle and without having to mess around with this.

Without having any YouView set-top boxes to hand or a BT TV subscription, I can’t say how well this works with other platforms and services, so your mileage may vary.

The Huawei AI Life mobile app gives you access to most of these features, and also acts as a handy diagnostic/optimisation tool. It’ll attempt to fix any wireless interference snags you may encounter, although you can’t do more advanced things like change Wi-Fi channels from the app.

As with the Tenda AC10U AC1200, the Honor Router 3, was tested in a three bed terraced house in south London, with link speed tests taking place in a number of locations.

The first lot of speed tests took place 1m away from the router, which is set up on the ground floor, close to the master socket.

The second test took place 5m away, with one wall in the way, with the third test taking place one floor up and two rooms back. The final set of readings were taken out in the garden, roughly 14m from the router, with the back door shut.

For the sake of comparison, we separated both the 2.4GHz and 5GHz SSIDs of the Honor Router 3 and a Virgin Media Super Hub 3:

Wireless speeds in the home were very good, especially on the ground floor, and it was impressive to be able to get a 5GHz connection upstairs.

On the flipside, while we were able to get a 2.4GHz connection out in the garden, it was slow going. Based on the results above, if you want reliable whole-home coverage, get a mesh Wi-Fi network, or some powerline adapters.

Compared with the Virgin Media Super Hub 3, which is starting to show its age a bit, the Honor Router 3, comes up looking the better option – not surprising when you remember that the Super Hub 3 is an 802.11ac router, while the Honor Roiter 3 uses the latest 802.11ax standard, aka Wi-Fi 6.

The Honor Router 3 can be ordered online in the UK now for £79.99 and from the official store you’ll get a free Honor Band 5 and a pair of Honor AM115 Earphones until 31 July.

However, if you don’t mind importing it then retailers such as Banggood have it for £52 at the time of writing, with UK shipping included.

You won’t be able to buy the Honor Router 3 in the US, but you can get it in Europe for €79.90 in Germany, France, Spain, Italy and the Netherlands.

The Honor Router 3 is another cheap ‘n’ cheerful device that represents excellent value for money. It’s slightly better than the Tenda AC10U in that link speeds were faster in our tests, and the price tag is about the same.

If you’re on a tight budget, and you’re not due a router upgrade from your ISP anytime soon, consider picking up one of these.

Having said that if you’ve got the cash to splash, consider opening your wallet for something like the D-Link EXO AC2600, which costs more, but is better value overall – there are more ports, Alexa and Google voice-assistant integration, which helps if you’re invested in a smart home ecosystem.

If none of that matters, and you just want an inexpensive router to replace one you really ought to have upgraded a couple of years ago, then the Honor Router 3 is an excellent choice.