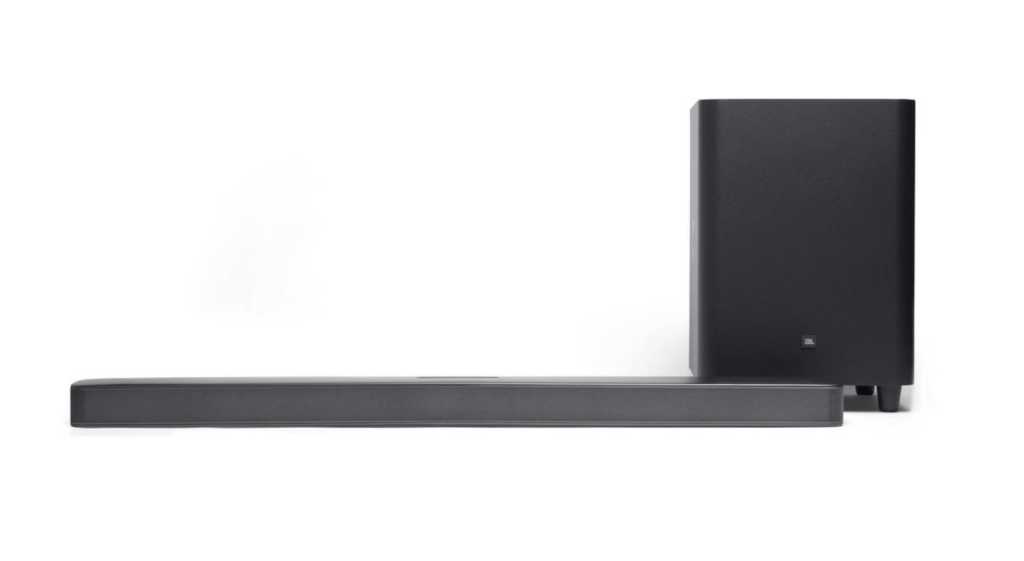 It might take up a lot of space on your TV unit, but the combination of a great speaker setup, a powerful subwoofer and JBL MultiBeam technology provide an exquisite experience.

Soundbars are all the rage right now, offering a simpler alternative to traditional surround sound system setups without too much of a sacrifice to audio quality. Just about every tech manufacturer has a soundbar or two, from Samsung to LG, and that’s not even including dedicated audio brands like Sonos, Denon and JBL.

JBL’s Bar 5.1 Surround has the potential to stand out from the crowd by utilising the same patented MultiBeam technology the company uses in cinema audio systems around the world. The technology provides impressive audio recreation, throwing sounds around the room with ease to fully immerse you in the moment.

The JBL Bar 5.1 Surround offers what I’d call a standard soundbar setup, compromised of a soundbar and an accompanying wirelessly-connected subwoofer that sits out of the way nearby. The soundbar itself will take up quite a bit of your TV unit – or even hang off the ends, as it does on mine –  measuring in at 1018 x 58 x 100mm, but with a total of seven speakers built into the soundbar, it’s a necessary sacrifice to make. I’d certainly rather a better audio experience at the cost of a small footprint. 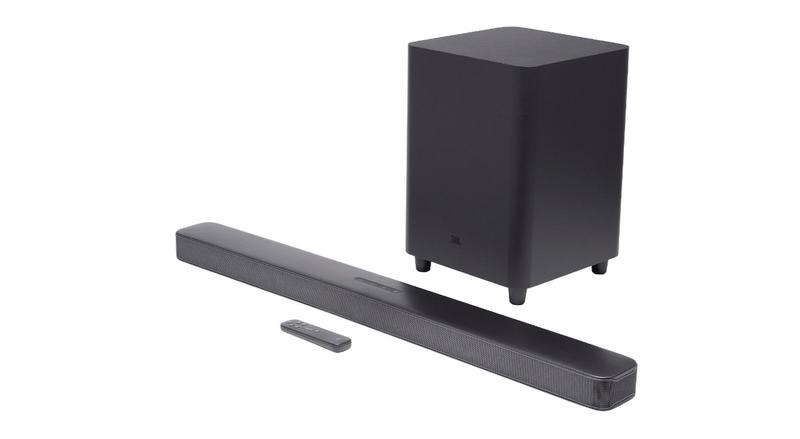 That being said, the soundbar sports curved pill-shaped corners of the soundbar that make it seem smaller than it really is while also helping it stand out from a sea of grey soundbar systems available in 2020.

The design is very minimal, and that extends to the on-soundbar controls. They’re found smack-bang in the middle of the soundbar for easy access, with four buttons on offer: power, volume up, volume down and source. Those are arguably the most used controls on a soundbar, but without a button to adjust bass, that’s something you’ll have to use the bundled remote for. The buttons are also physical and offer a tactile response, opposed to some soundbar systems that use a (rather frustrating) touch-based system.

The remote, like the soundbar, is refreshingly simple, offering a handful of clearly labelled, well-spaced buttons that’s easy to use by touch-only once you get used to the setup. And yes, unlike the Edifier S50DB, there’s a mute button on the remote – it’s a simple feature, but one that a growing number of manufacturers are ditching on soundbar remotes. 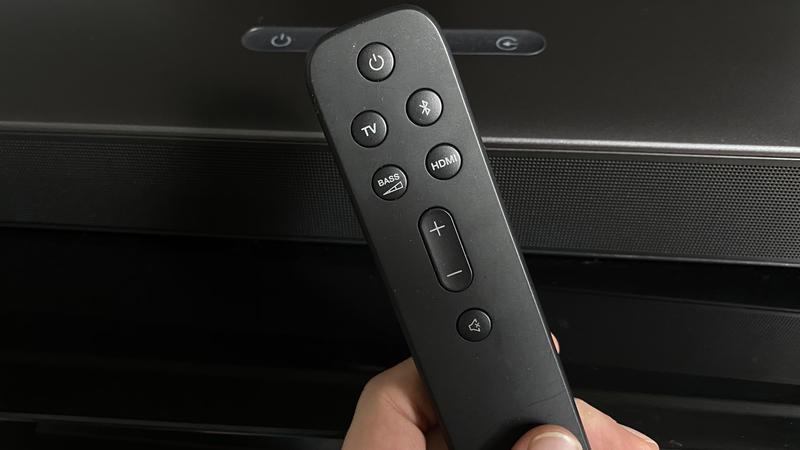 There’s no noticeable display on the JBL Bar 5.1 Surround – instead, there’s a dot matrix-esque display built into the right-hand side of the soundbar, behind the speaker grille. It’s a clean look, only appearing when adjusting volume, changing sources or when initially turning the system on, disappearing back into obscurity when not needed. That’s one less distracting light when trying to get into a good film, at the very least!

Accompanying the soundbar is the wireless subwoofer, housing a 10in woofer that packs a serious punch, but more on that later. The only real complaint about the soundbar is the size of the thing – it’s an absolute unit. Measuring in at 305 x 440 x 305mm, it’s one of the biggest wireless subwoofers I’ve reviewed, and some people might struggle to find somewhere for it to sit nearby inconspicuously. In my case, the subwoofer is actually taller than my TV unit.

Connectivity: Lacks the basics, but makes up for it

The JBL Bar 5.1 Surround is an odd prospect when it comes to connectivity: while it boasts a handful of premium options, it’s missing a few of the basics. You see, you’ve got the fairly standard Optical and HDMI (complete with ARC support) inputs, but it’s missing the Auxiliary and Coaxial inputs found on many other soundbar systems, so you’ll have to be sure that your TV either has an Optical port or supports HDMI ARC before heading to the shop to buy the Bar 5.1 Surround. 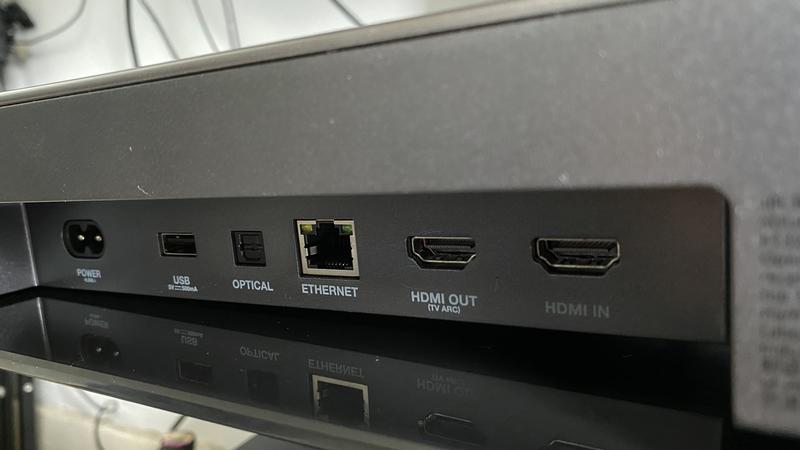 You’ll also find Bluetooth support, allowing you to connect your smartphone or tablet to the soundbar when you’re listening to music or playing mobile games, but it’s a feature I’ve only used once or twice. Why? Because the JBL Bar 5.1 Surround offers both AirPlay 2 and Chromecast support, connected either via built-in 2.4GHz Wi-Fi or Ethernet.

AirPlay 2 is a great feature of the soundbar if you own an iPhone, iPad, Mac or Apple TV, allowing you to wirelessly stream content from your Apple devices to the soundbar without having to faff around with Bluetooth and potentially compromise on sound quality. AirPlay 2 also allows for multi-speaker output, so if you’ve got another AirPlay 2-enabled speaker in the house, you can sync the two together.

And, of course, Chromecast is the perfect partner for Android users. It’s not quite as advanced as AirPlay 2, without the ability to work as part of a multi-speaker setup, but it’s still a much easier way to connect to the speaker compared to Bluetooth. Still, Bluetooth is still there for devices – like laptops – that may not support Chromecast or AirPlay 2 playback.

That’s essentially where the smarts end when it comes to the Bar 5.1 Surround – there’s no companion app for iOS and Android to control the soundbar, and nor is there any kind of compatibility with Alexa, Google Assistant or Siri, and that’s a bit of a shame considering the internet connectivity is readily available. 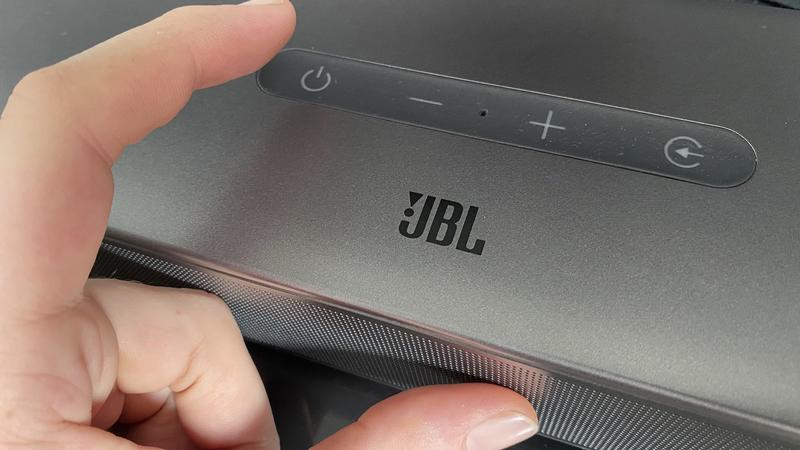 Audio: MultiBeam is the way forward

JBL is famed for its phenomenal audio performance, and that standard is upheld by the Bar 5.1 Surround. That’s possible due to the inclusion of five front-facing drivers and two side-firing tweeters, along with the strong, prominent bass from the wireless 10in subwoofer, offering a combined 550W of power.

That’s a strong setup, but that’s not the main reason why the Bar 5.1 Surround sounds so great. You see, JBL has been producing sound systems for cinemas for over 75 years, utilising the company’s own MultiBeam technology to produce an incredibly detailed and spacially-accurate audio experience, and that same technology is found in the Bar 5.1 Surround.

While some claims of 3D audio are pure marketing schpiel, JBL delivers on the claim – and it’s mind-blowing at times. The way that the soundbar can throw sounds around the room, especially to the far left and right of the speaker system, is amazing, creating an incredibly immersive experience when watching movies and playing games. The soundscape is nothing short of impressive, with incredible sound separation and simulated directional audio.

That does depend on the content you’re watching – Dolby Digital-supported content will always produce a better soundscape better than standard stereo content – but generally speaking, most content on Netflix, Amazon Prime and most other streaming services offer Dolby Digital support. I have to point out that it doesn’t support Dolby Digital Plus or the high-end Dolby Atmos, however, and that’s a bit of a shame considering the audio chops on offer from the soundbar system. 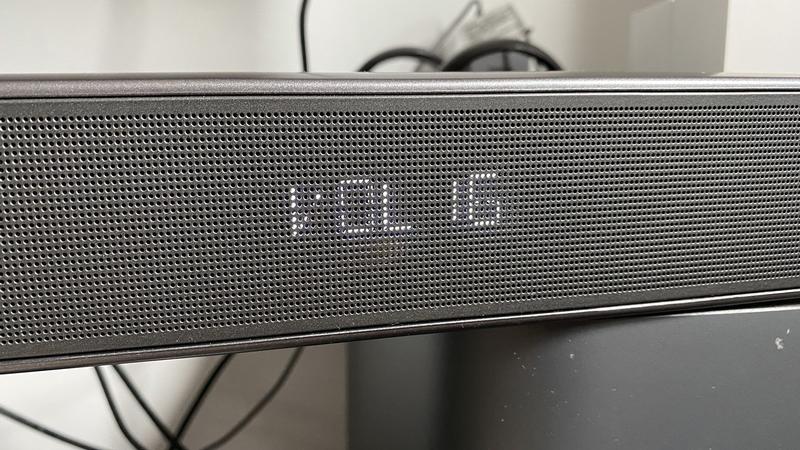 Regardless of whether you’re watching a movie or listening to music via AirPlay 2, the JBL Bar 5.1 Surround delivers rich, detailed audio with clear, crisp vocals and truly thumping bass, the latter of which can be independently adjusted via the remote control. The only slightly odd omission is the lack of EQ presets, enhancing playback depending on what you’re watching or listening to.

At £549.99/$499.95, the JBL Bar 5.1 Surround isn’t exactly an entry-level soundbar system, but you do get your money’s worth – especially with JBL’s MultiBeam technology, AirPlay 2 and Chromecast on offer. It’s certainly cheaper than the £799/$799 Sonos Arc, and Sonos’ option doesn’t include a subwoofer.

If the JBL Bar 5.1 has piqued your interest, it’s available to buy directly from JBL, although those in the UK can head to Currys and pick it up for £100 cheaper at £449.

For more soundbar inspiration, take a look at our choice of the best soundbars right now.

The JBL Bar 5.1 Surround is an impressive bit of kit, however large it might be. The soundbar looks sleek and minimalistic, and although it may lack standard connectivity options like aux-in, it makes up for it with the inclusion of both AirPlay 2 and Chromecast alongside Optical In, HDMI and Bluetooth connectivity.

Unsurprisingly, it’s in the audio department that the Bar 5.1 Surround really flexes its muscles. Using JBL’s own cinema-level MultiBeam technology, the soundbar can project audio around the room with impressive detail, creating an immersive viewing experience. That’s backed up by the 10in subwoofer that delivers thunderous bass, adjustable via the bundled remote.

Considering it’s available for £100 less than its RRP at Currys in the UK, it offers both great value and great performance.