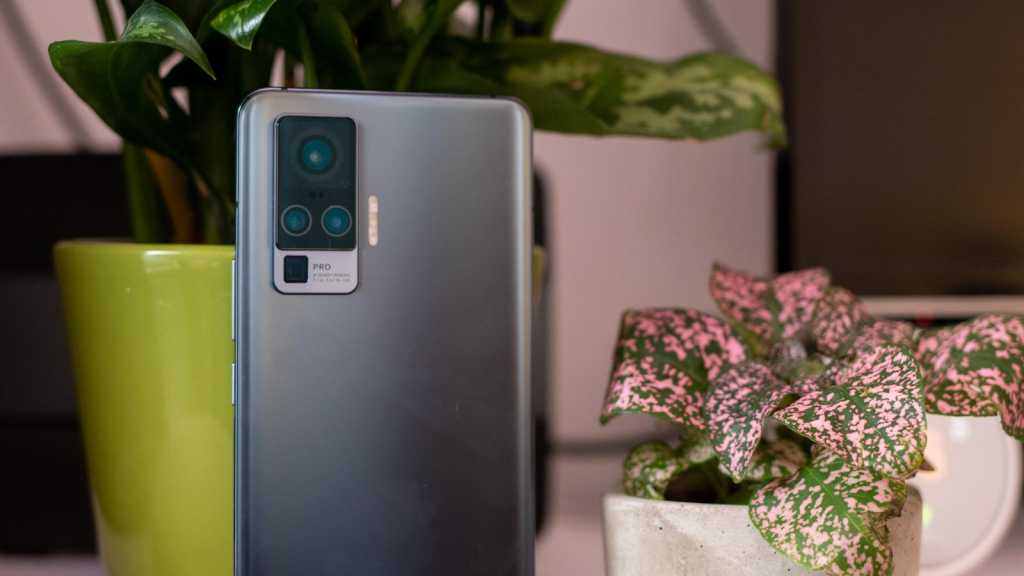 The Vivo X50 Pro’s chief selling point is its built-in camera gimbal, but this would be a competitive mid-range phone even without it.

The X50 and the X50 Pro are the first phones in Vivo’s upper-mid-range X series to get an international launch – though the top-end X50 Pro+ is staying in China for the time being. In fact, since initially writing this review the X50 Pro has arrived officially in the UK, though under a new name: the Vivo X51.

The X50 is a pretty standard mid-range device, but the X50 Pro is a little more special, boasting the world’s first built-in gimbal stabilisation for a phone camera – a potential game changer for both video and night-time photography.

OK, first off: yes, I know you’re not meant to shake Polaroids, don’t @ me.

But more importantly: you can shake the Vivo X50 Pro. The Pro (and the China-only Pro+) are the first retail phones to feature the smartphone gimbal tech that Vivo first showed off in its Apex 2020 concept phone earlier this year.

If you don’t know, a gimbal is a stabiliser that essentially mounts the camera so that it floatsm and moves it in the opposite direction to any exterior movement – such as shaky hands – to keep the image itself stable. They’re usually big bulky bits of kit used in professional filming setups, but over the last few years they’ve shrunk small enough to be used to mount smartphones, as in the DJI Osmo Mobile series, and now Vivo has squeezed one into a phone itself.

To be clear, the gimbal tech is only built into the 48Mp main lens, but that makes sense – that’s the one you’ll most often use for filming video or taking the long-exposure night time shots where it helps. It offers dual-axis stabilisation, but is paired with three-axis electronic stabilisation to amplify the effect.

For video, the effect is immediately obvious. Whether it’s trying to hold a steady single-shot, or filming something inherently shaking like shooting while walking, the X50 Pro smooths out the worst of camera shake. There’s a slight stickiness every time you pan, as the gimbal at first tries to compensate for the movement, but beyond that there’s very little downside here, and quite obvious upside to video quality.

This will be of niche appeal to most – though I know plenty of YouTubers and vloggers who will no doubt get a kick out of it – but anyone who shoots any video, even just for Instagram Stories or TikTok, while find immediately improved results. An optional on-screen visual aid shows you when you’re moving too much for the gimbal to compensate for, and the Ultra Stable mode crops the video in further to combine the gimbal with extra electronic stabilisation.

When it comes to regular shots, that 48Mp lens produces images with bright, punchy colours and decent dynamic range. There’s a little less detail than I expected, and occasional artifacting and noise that creep in, but overall this is a plenty capable shooter.

There’s a noticeable drop in detail when you shift to the 8Mp ultrawide, but that’s to be expected, and its colour range is almost as impressive as the main camera’s. The periscope zoom isn’t bad either – it definitely can’t match Huawei or Oppo’s tech for holding detail at high zoom levels, but they’re the best of the best, and this isn’t bad at all.

Switch to night mode or astro photography and you’ll see the gimbal kick back in to steady these long and multiple exposure shots. I had high expectations here, and admit I was a bit disappointed. The gimbal is clearly doing its work in preserving detail and sharpness, but there’s still plenty of noise, and the colour reproduction is clearly way off Google and Apple’s, with a tendency to try and make low light shots look like they were taken in daylight. It also doesn’t possess that magic ability to salvage shots taken in pitch black conditions – you’ll still get pitch black back.

On the selfie side, there’s just one lens, offering a high 32Mp resolution but a less impressive aperture of f/2.5. That detail shines through in crisp selfies and portrait shots, but you definitely miss out on the colour range a little.

All-in-all the X50 Pro’s camera setup is great for steady video, and solid for everything else. This isn’t the best camera around, and it’s not even the best camera at this price point, but it’s capable, versatile, and especially strong on video at least.

Specs: Not quite Pro, but close enough

The X50 Pro’s camera may impress, but the Pro moniker feels a little less applicable to the rest of the phone’s internals, which are more upper-mid-range than pro standard.

At the heart of the phone is Qualcomm’s Snapdragon 765G, a 5G-enabled chipset that won’t quite match the top-tier Snapdragon 865 (or recently announced 865+) but will hold its own.

Vivo has paired the 765G with 8GB of RAM and a choice of 128GB or 256GB storage (availability may end up varying by market). The result is more than enough oomph for most people – the phone flies through day-to-day tasks. Though as you can see in our benchmarks, it does notably lag behind the 865-powered OnePlus 8 – and even the Realme X3 SuperZoom using last year’s Snapdragon 855 – in demanding CPU and GPU performance.

There’s a single speaker – no stereo sound, sadly – and no headphone jack either. There is NFC at least, so contactless payments are supported, and there’s Bluetooth 5.1 and Wi-Fi 5 – not the more recent Wi-Fi 6 standard.

As for biometrics, you can use the single selfie camera for face unlock, though it won’t be too secure. The in-display fingerprint sensor is better, and is one of the faster, more reliable in-display sensors I’ve used yet.

Speaking of that display: it’s a 6.5in curved AMOLED, with Full HD+ resolution, HDR10, and a refresh rate of 90Hz. If you don’t speak specs, that basically means it’s bright, vivid, and smooth, though won’t be quite as crisp or smooth as the QHD and 120Hz displays on some flagships this year. Most people won’t be able to tell the difference anyway though, and honestly I’ve found this screen a consistent joy to use.

Finally, battery life. With a 4,315mAh cell the X50 Pro pretty comfortably lasts a full day’s use, even with the always-on display turned on, and should last longer without it. 33W fast charging isn’t the best around on paper, but in my tests it averaged 62% charge in half an hour – up on Vivo’s own 57% claim, and fast enough to satisfy even the most ardent speed freaks.

Note that there’s no wireless charging, and also no IP rating for waterproofing.

I’ve gotta say, if there’s one thing that’s surprised me about the X50 Pro it’s how much I’ve enjoyed the design, build, and simple feel of the phone.

The Pro is only available globally in a colour called Alpha Grey, an attractively muted gradient. It’s finished in matte frosted glass, which looks great and feels simultaneously smooth and grippy – you don’t worry that it’s gonna slide right out of your hand, but it doesn’t sacrifice any of its slick, premium feel to get there.

It helps that with a 6.5in screen it’s a big phone, but not uncomfortably so. The curved display hits the sweet spot between comfort, style, and practicality, and at 181g it’s reassuringly weighty without feeling heavy in the hand.

The punch-hole selfie camera is unobtrusive, and I love Vivo’s introduction of a two-step rear camera module which allows the main lens to jut out from the body – a necessity given that gimbal – while keeping the periscope a little more flush, and finished in a different tone. It somehow makes the chunky camera module feel smaller than it is, a clever flourish that Samsung could learn a thing or two from.

If I was allowed one small complaint, it would be the choice to emblazon the phone’s top edge with a holographic ‘5G: Professional Photography’ graphic. It’s small, it’s subtle, and you can mostly forget it’s there. But it’s still pretty dumb looking.

And here’s the big caveat to the X50 Pro: the software. While it ships with Android 10 (good) it is covered up by Vivo’s Funtouch OS (bad).

Anyone who used a Huawei, Xiaomi, or Oppo phone before those companies made their big push into the west will know that Chinese software sensibilities differ to the west’s, and Funtouch still shows it. In fairness to Vivo Funtouch is now a lot better than it was on the last Vivo device I reviewed, last year’s Nex 3, but there’s still work to be done.

There’s a lot of customisability, but it’s frankly overwhelming at times, and there’s no clear internal logic to the layout of the settings section. The result is that it’s frequently difficult to find the settings you want to change, and that if often involves fighting past unrelated options you barely understand.

It’s also curiously unrespectful of user choices. The phone ships with a selection of rotating lockscreen wallpapers. I turned these off, replacing them with one of my own photos – a process which itself took 5 minutes of playing with settings to figure out. Ever since, I get a pop-up notification once every few days asking if I want to resume the lockscreen posters and get Vivo’s “beautiful wallpapers” again. It’s not quite as egregious as Samsung’s built-in ads, but it’s not far off.

Fortunately, the phone’s western release – as the X51 – features a modified version of Funtouch that has less bloatware and is easier to make sense of, so consider opting for that version instead.

Here’s where things get a little trickier. The X50 Pro is out now in China, and you can import it now with prices starting from £509 for the 128GB model.

The phone has also launched in Europe as the X51 though, and this version costs £749/€799 for a model with 256GB of storage. It gets you better localised software and guaranteed support for western 5G bands, but does of course come at a price premium.

Otherwise, check out our ranking of the best mid-range phones you can buy in the US and UK for similar options that are a little cheaper in the West.

The Vivo X50 Pro will live and die by its camera. Elsewhere, this is a decent upper-mid-range phone with solid specs, slick design, and so-so software.

But if you want in-camera gimbal stabilisation for videos or low light photography, this is the only game in town. Throw in the 5x optical zoom periscope, the portrait lens, and wide-angle and it’s easy to see the appeal.

Still, for many this camera oomph will be overkill, so decide carefully. If you’re unlikely to make the most of it then there are plenty of other Snapdragon 765G phones that offer similar specs for less outside of photography