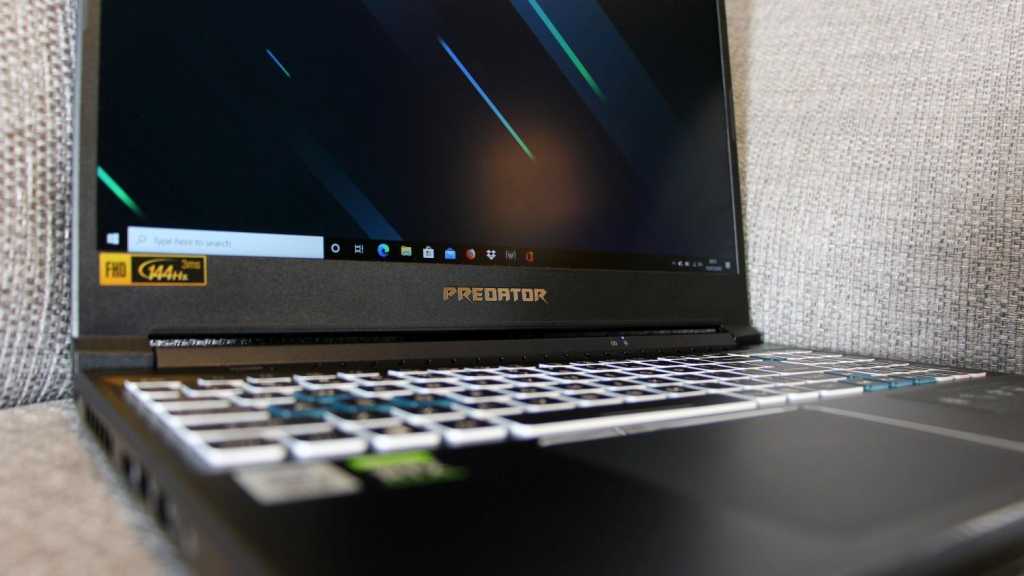 Acer provides a pretty nice balance of value and performance here at 144Hz, as long as your ok with middling battery life, lower screen quality and a less portable design.

The Acer Predator Helios 300 has been around for a few years, but this 2020 model is an updated version. It’s been outfitted with new components, and minor exterior changes make it a little easier to live with.

A more powerful Nvidia RTX 2060 graphics card and a new Intel 10th-gen CPU have both been fitted, and it’s paired with a 144Hz display and a whopping 20GB of memory.

The Predator Helios 300 is designed for mainstream gamers, and its £1,399 price makes it a little more expensive than its predecessor – but it’s still a little cheaper than both of its key rivals.

There haven’t been big visual changes here from the Helios 300 (2019) . The lid still has a blue, illuminated logo between two slashes. You’ll still find dramatic air vents with blue internals – although minor tweaking means they now have a row of metallic plastic underneath, too.

Around the front, the trackpad is ringed with metal to match the front of the machine, and the bulk of the machine is built from matt black aluminium. Acer’s black-and-blue theme looks reasonable, but rivals are more subtle if you would prefer: the MSI GS66 Stealth is almost entirely black, with fewer flourishes, and the Asus ROG Zephyrus 14 also looks more mature.

The Acer Predator Helios 300 weighs 2.2kg and is 23mm thick, which makes it larger than rivals too. The MSI is a little smaller and lighter, while the 14in Asus is far more compact.

Build quality is middling: the base is sturdy but the screen has a little too much give. It’s not worryingly weak, but its rivals are more robust, and a protective sleeve would be a good idea. Also bear in mind the laptop’s front edge – it can dig into your wrist and can be quite irritating.

The Helios 300 has single USB 3.2 Gen 2 Type-A and Type-C ports, with both connections supporting faster 10Gbps transfer speeds and charging. There are two slower USB 3.1 Gen 1 connectors, HDMI and mini-DisplayPort outputs and a headphone jack alongside Gigabit Ethernet.

Once again, rivals are arguably better: the MSI has more, faster USB ports and adds Thunderbolt, while the Asus subtracts Gigabit Ethernet and Thunderbolt but does include two USB-C connectors.

The Helios 300 has a dedicated numberpad, which instantly lifts this keyboard above both rivals. There’s a dedicated button for Acer’s Predator software alongside a good layout – the only minor issue is the single-height Return key.

The WASD, cursor and Predator buttons are highlighted with see-through plastic, and every key has a slightly concave shape for better grip.

The Predator has RGB LED backlighting, although it’s not a per-key affair – instead, it uses four zones. It’s a sensible compromise, and the lighting is bright and consistent.

The keyboard offers ample travel for gaming and typing, and its action is comfortable and quick, with a good amount of snap. It’s crisper than the Asus, but a tad softer than the MSI. It’s also a little too loud for my liking.

The keyboard is decent, but the trackpad is disappointing. The buttons are soft, and the MSI’s pad is far wider. The positioning is awkward too as it sits on the left of the machine, so trying to use the trackpad and the WASD keys simultaneously is cramped. If you want to enjoy gaming, use a USB gaming mouse.

The 15.6in display has a Full HD resolution, a 144Hz refresh rate and a 3ms response time, which means it’s ideally positioned for mainstream single-player and competitive gaming.

This display has no syncing and it’s certainly possible to get a higher refresh rate – the MSI has a 240Hz screen. However, a 144Hz display is buttery-smooth in all games, and most users won’t notice the benefit of a leap to 240Hz.

The screen has middling quality. Its brightness level of 329 nits is fine, but its black point of 0.38 nits is high. The contrast ratio of 866:1 is underwhelming, and in real-world situations that means colours are a little pallid, with darker areas that appear grey rather than black.

The colour temperature of 8,621K is on the chilly side, which also leaves the screen feeling a little washed-out. For gritty, metallic games and movies, that’s not terrible – but other panels have more punch. The Acer’s sRGB coverage level of 87.2% is mediocre, and this display can’t handle DCI-P3 or Adobe RGB.

The average Delta E of 2.59 is reasonable, and the panel’s uniformity is good – the brightness deviated by 11% in the top-left corner and by less than 6% everywhere else.

The Helios 300’s display is good enough for gaming, primarily thanks to its refresh rate and response time – it’s smooth and fast, even in frantic situations. However, the MSI’s 240Hz panel is faster, with better contrast and more accurate colours. The Asus is also better in those areas, and is available with 1080p/120Hz and 1440p/60Hz options.

The speakers have enough volume for bedroom gaming, but they have weak bass, a muddy mid-range and a tinny top-end – they’re only useful if you have no other options. None of the Acer’s different audio modes made a difference, either. The Asus is much better, and a gaming headset would be a wise investment.

The Intel Core i7-10750H and Nvidia GeForce RTX 2060 are a popular laptop combination at the moment. The former component is one of Intel’s new 10th-gen CPUs, and the latter is a solid graphics core with Nvidia’s latest architecture.

The RTX 2060 included here has the usual 6GB of memory, and it runs at base and boost speeds of 1,005MHz and 1,350MHz – speeds that outpace its default specification. The Predator Helios 300 also has Fast and Extreme overclocking modes that improve the boost speed to 1,400MHz and 1,450MHz.

The processor has six multi-threaded cores, base and boost speeds of 2.6GHz and 5GHz and Intel’s Comet Lake architecture. Specs are rounded out with 16GB of memory and a 1TB SSD alongside Killer-branded Gigabit Ethernet and WiFi 6. It’s a good selection overall.

The rival MSI has a virtually identical specification, but the smaller Asus uses a more efficient RTX 2060 Max-Q alongside a new AMD Ryzen 4000-series mobile CPU.

The Acer’s RTX 2060 is impressive in benchmarks. We’ve also included Acer’s Nitro 5 to show how a cheaper option compares.

In 3D Mark Sky Diver, the Acer scored 36,003, which is more than 1,500 points beyond the MSI and further ahead of the low-power Asus. In Wolfenstein: Youngblood the Acer averaged 103fps, which is seven frames beyond the MSI, and its 75fps pace in Far Cry: New Dawn matched the GS66.

The Acer’s 64fps pace in Total War: Warhammer II is three frames ahead of the MSI and three frames behind the Asus, which pulled ahead thanks to its AMD CPU.

The Helios 300 is a little quicker than rivals in most gaming scenarios, and it’s got enough speed to handle key situations: it’ll play high-end single-player games at tough graphics settings, and it’ll run eSports games at the speeds required by the 144Hz display.

Don’t expect much from the Acer’s GPU overclocking, though: these modes provided inconsistent results, with declining speeds in 3D Mark and Far Cry alongside a modest gain in Wolfenstein.

The Predator’s Geekbench 5 score of 6,022 is marginally ahead of the MSI, and those machines were virtually identical in PC Mark 10. The diminutive Asus machine is better, though, thanks to its eight-core AMD CPU. That machine scored 7,693 points in Geekbench 5 and 5,682 in PC Mark 10.

The Acer has the power to handle everyday work, multi-tasking, office applications and photo editing. However, the Asus’ AMD chip is far better if you need a laptop for work alongside play.

The Acer has no interior or exterior temperature issues, and its noise levels are fine when gaming using conventional performance modes – there’s fan noise, but it’s modest. The noise is louder when using the misfiring overclocking modes, and stressing the CPU also caused the noise to increase. Both scenarios are easy to avoid, however.

The Acer can’t compete with either rival when it comes to battery life. In a video playback test with the screen at 120 nits the Acer lasted for four hours and 50 minutes, but the MSI lasted for eight hours – and the Asus eleven hours.

When gaming, the Acer lasted for an hour and fourteen minutes. You’ll need to stick by the mains if you want to use this laptop for a proper gaming session.

UK users can choose from two different Helios laptops. The model we’ve reviewed costs £1,399 from Scan and a £1,299 version maintains most hardware but drops down to GTX 1660 Ti graphics – so you have a little less power alongside no Ray-Tracing.

In the US, only the pricier model is available right now, but at US$1,119 via Amazon.

Acer’s rivals are more versatile. The MSI is available in numerous different options, including alternatives with faster GPUs and 300Hz screens if you’re happy to splash more cash.

The Helios 300 is pretty good value for money but the ROG Zephyrus G14 just can’t be beaten starting at £1,099.

The Predator Helios 300 has a decent price, a fast GPU and solid components and connectivity. Combine this with the good keyboard and the smooth 144Hz screen, and you’ve got a system that can easily cope with mainstream gaming and eSports.

It’s a well-rounded machine and is cheaper than the MSI GS66 Stealth with very similar performance, although that has a 240Hz display if that’s enough to tempt you to spend more.

The bigger issue for Acer is that the excellent Asus ROG Zephyrus G14 is even cheaper and offers amazing performance and a better screen. Both rivals have a more svelte and portable design than the Helios 300, too.

For mainstream gaming the Acer Predator Helios 300 is easily good enough thanks to its solid components and design.