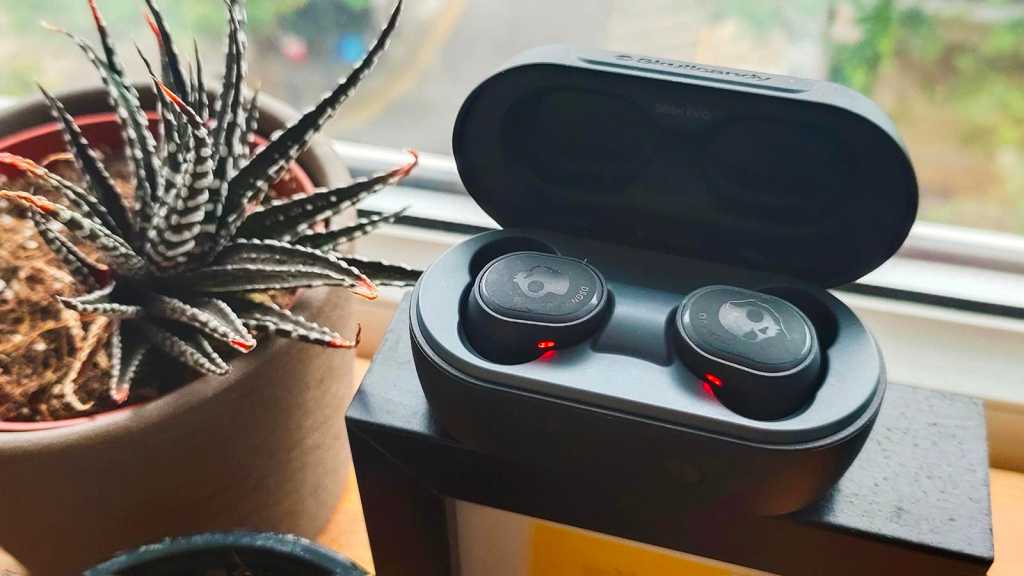 These budget wireless earbuds might pride themselves on being simple, but it’s at the cost of mediocre sound, build quality and basic controls. Tile tracking is the big selling point here.

The Skullcandy Sesh Evo are budget wireless earphones that integrate Tile tracking – which means you can find them easily when lost. But is it worth parting with £60/US$60? We find out.

Design & Build: All plastic, no frills

The Sesh Evo unashamedly look budget in a basic plastic charging case. No design flourish here. At 63.5g, it’s super light, but it does feel cheap. 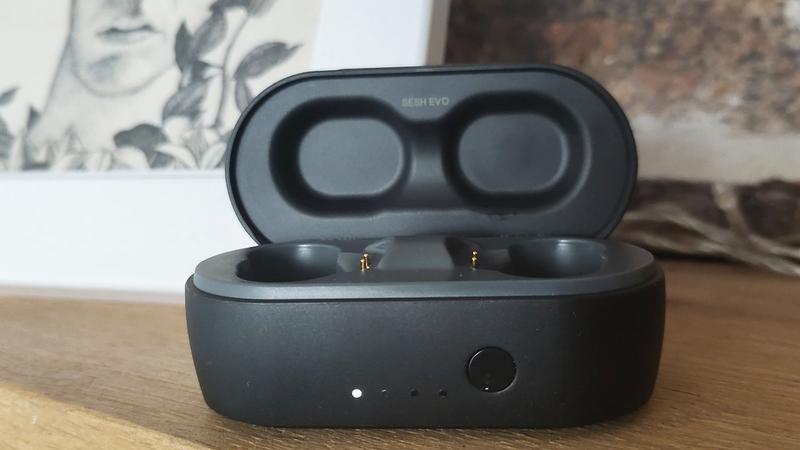 Thankfully, if the case (or earbuds) ever break, you can them replaced at a discount from Skullcandy, as per its Fearless Use Promise.

The Sesh Evo’s otherwise bland case is redeemed by nifty LED lights along the front that indicate battery status. I found this particularly helpful when I didn’t want to go into my phone’s Bluetooth settings for battery information.

As for the feather-light buds themselves? They offer a snug fit but could benefit with an anti-slip coating or texture, as they slipped out of my hands on a couple occasions. There is a (very welcome) silicone coating on the control buttons though.

Unlike wireless earbuds that respond to tap or swipe gestures, you’ll have to physically press down on the Sesh Evo’s buttons. In my first attempt, I had to press down quite forcibly, which wasn’t very comfortable. The better way to do this is to pinch the button along the top ridge. 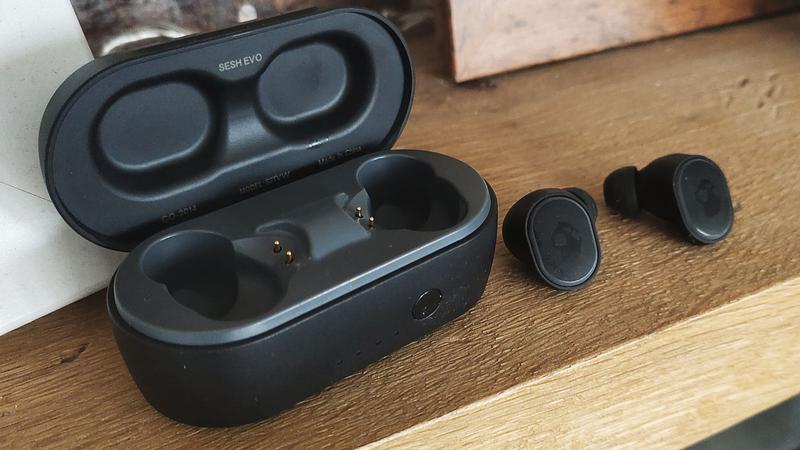 The Sesh Evo’s controls aren’t the easiest to remember as they depend on the number of times you press (or pinch) the button. There should be a better way of doing this. Let me illustrate:

One press starts and stops audio – great, you got this, says your internal monologue.

Two presses raises the volume – now was that on the left ear or right ear? Ah, right ear (“right-raise, left-lower”, you repeat under your breath). You try again but now you’ve accidentally pressed it three times. Oops. You’ve launched the smart voice assistant on your work-from-home laptop to which the earbuds are paired. No, Cortana can’t help.

But you’re nearly there. You keep pressing ahead (pun intended).

Four presses and you’re in the sound modes: Movie, Podcast and Music. But, now you’ll have to press the earbuds four times each time you want to change the mode. Oh yeah, you can’t go backwards.

You’ll just have to sit there pinching away at your ear. Thankfully you’re not out on a jog.

You do get IP55 water, sweat and dust resistance when you are though, so that’s one less thing to worry about.

The most attractive benefit of the Sesh Evo is that it integrates with Tile trackers – those Bluetooth squares that help forgetful folks (like myself) quickly locate tagged items, like house keys or a wallet.

I was excited to try this feature via the Tile tracking app, but the pairing process wasn’t very straightforward – though this is more of a criticism of the Tile app.

When you pair the Sesh Evo earbuds via the Tile app for the first time, unclear pairing instructions suggests you need a separate “Tile device” to register each earbud in the first place. You don’t.

You may need to make a few attempts before the app recognised the Sesh Evo.

When finally paired, you’ll hear a whistling sound from each Sesh Evo earbud (you can choose which bud should chime). Though not incredibly loud, the whistle is sharp, so you’re likely to notice it if you’ve lost the earbuds inside the house or in your car.

The Tile tracker app will show you whether you’re moving closer to the earbuds as well as its location history. Just be sure the earbuds are charged in the first place as it won’t work if they’re dead, of course. 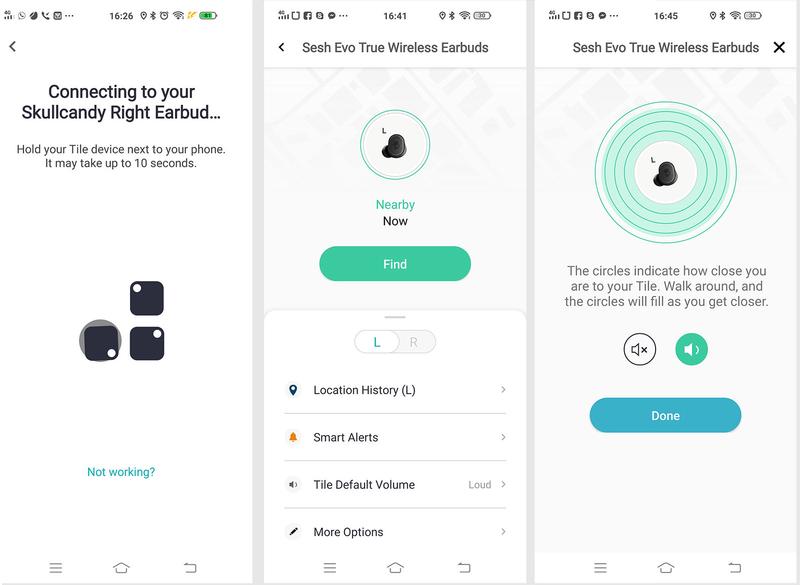 Yes, the Sesh Evo are affordable earbuds, but this is more than apparent in the perfectly mediocre audio quality.

The sound profile and tuning leans towards the treble and mid-range, which is tinny at times and they lack the warmth of rich bass.

Instead, the Sesh Evo stretches the mid-range towards the lower end. This means R&B, hip-hop, and other bass-heavy genres won’t sound very satisfying. You can get away with mid-heavy rock or pop though.

In comparison, you will find a stronger bass in the slightly more expensive noise-cancelling Amazfit PowerBuds (£99/US$99). 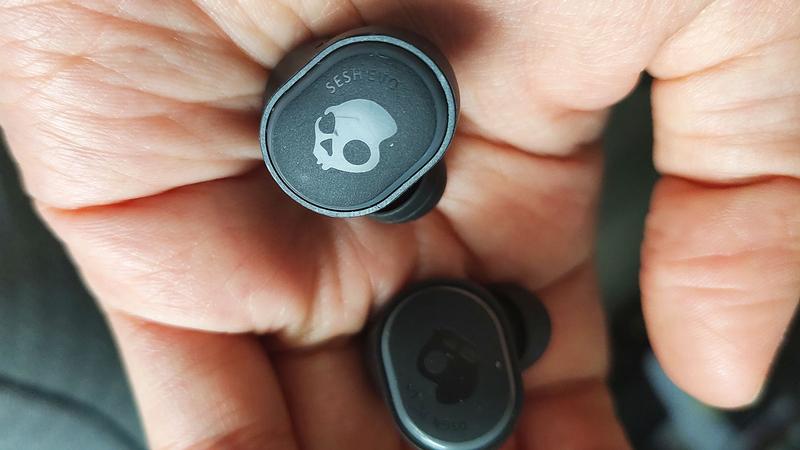 The Sesh Evo would truly benefit from in-app equalization (especially because Skullcandy has an app for its other products!). I would prefer this over cycling through three restrictive presets. It’s also very difficult to hear the difference between the Movie, Podcast and Music modes.

The Sesh Evo caters to the casual listener who isn’t particularly focused on high fidelity but wants an ambient soundtrack – whether that’s music or the news.

One of the strongest features of the Sesh Evo is how easily they connect to your device. If you’ve already paired them with your phone or laptop, you just have to take the earphone out of the case and they connect within seconds.

If they’re out of the case already, just press the control buttons for a couple seconds and they should pair to the last connected device right away. This feature is incredibly helpful if you don’t have the charging case nearby.

The Amazfit PowerBuds, in comparison, need to be inside the case to pair.

While the Sesh Evo offer Bluetooth 5.0 connectivity, I couldn’t pair them with two devices at once like I could with the Sennheiser HD 450BT.

The Sesh Evo excel when it comes to battery life. While the earphones carry five hours of juice on their own, you can add another 19 hours of life from the case, which charges via USB-C (cable included). Again, LED indicators on the case also give you a quick reading of how much charge remains. 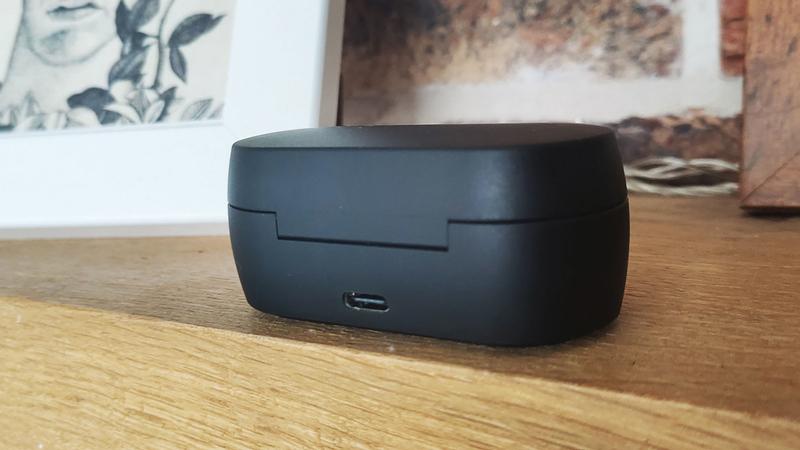 I could easily get over a week of use with minimal charging. If you use the Sesh Evo occasionally (say 2-3 times a week), you’re likely to get away with weeks of use as the case maintains charge while on standby.

The Sesh Evo are available in Bleached Blue, Pure Mint and True Black directly from Skullcandy, for £59.99/ $59.99.

Skullcandy undoubtedly priced the Sesh Evo competitively, but you can find cheaper options with superior sound in our round up of the best budget wireless earbuds.

“Perfectly Simple” is right, as Sesh Evo’s motto goes. Without noise-cancellation or customisable sound equalization, the Sesh Evo are almost as simple as you can get.

Yet equally, if you need something cheap and cheerful, perhaps to keep kids entertained on a road trip, these might just do the trick.

Tile tracking is the big selling point if you’re prone to losing earphones and a two year warranty is more peace of mind.