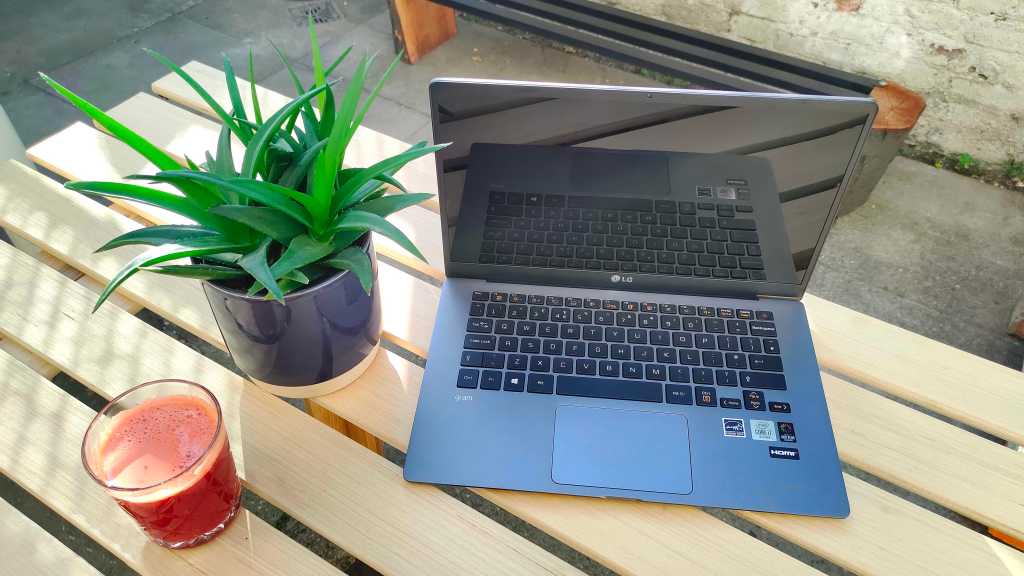 If you need the most portable laptop with good connectivity then the gram 14 is a front runner, but it’s not great in all areas.

LG’s line of gram laptops hasn’t been easy to get hold of in the UK over the last few years. However, 2020 is different as the firm has three different sizes to choose from.

The gram 14 comes in at under 1kg and yet still boasts the power of a Core i7 Intel processor, IPS screen and plenty of ports.

This puts it in contention for being one of the best portable laptops on the market.

The first thing that surprised us was the extreme lightness of the LG gram 14. It weighs less than a kilogram, a few grams more than a 12-inch tablet, so the term ultra‑portable fits it like a glove. This is largely due to its magnesium alloy coating.

It gives the impression that it can break easily, and that it’s made of plastic, but don’t be fooled, LG has it covered by the MIL-810G military standard for added protection.

The keyboard is very pleasant to use and typing is not so noisy that it disturbs those around you. Speaking of typing, it’s quick and accurate, thanks in part to the size of the keys, which has not been sacrificed in order to achieve a compact laptop at all costs.

The keyboard also offers enough space on the sides and underneath, so hands have enough room to rest and type flat on the keys.

LG has integrated a backlight system with two brightness settings for users working at night or in a low-light room.

The power key with built-in fingerprint reader looks too small to scan your finger properly, but it’s actually very responsive and accurate.

The touchpad is very satisfying too, with a large surface and works extremely well. It’s a little off-set from the space bar, but it’s placed exactly in the center of the laptop.

You might not like how small some of the keys are, such as the arrows, but this is fairly normal on a compact laptop. The bigger sacrifice at 14in is of course the numeric keypad, if you want an ultraportable computer with one, then the LG gram 15 (1.12kg) might be just right for you.

The LG gram 14 weighs just 999g, a very hard to beat weight – just bear in mind it’s not a 2-in-1 model so the screen can’t flip all the way around to be used like a tablet.

We appreciate that it has a one-handed opening system, but a camera shutter would have been welcome – athough this is an uncommon feature in the market.

The 14in (non-touch) screen has thin bezels with rounded corners, its upper edge that houses the HD camera.

Whether you are working indoors or outdoors (in full sunlight), you get a clear screen with contrasting colours and perfect readability.

As far as audio is concerned, the speakers have been placed under the computer on each side and are slightly raised.

There’s support for DTS:X Ultra (an immersive 3D audio format rivaling Dolby Atmos) but this isn’t supported by the likes of Netflix and Amazon Prime Video and the speakers don’t sound great anyway so I used the gram 14 with a Bluetooth speaker.

In addition, this ultra-portable LG is equipped with a generous amount of fast RAM (16GB, DDR4 3200MHz). As for its storage, you will benefit from 512GB on a M.2 SSD, a speedy drive for your files and apps.

Finally, in terms of graphics, you will only benefit from an integrated Intel Iris Plus Graphics.

The benchmark scores below are a mixed bag as the Geekbench 5 figure is far behind rivals such as the Dell XPS 13 9300 (2020) and Acer Swift 3 – both have the same Core i7 processor. So it seems LG has sacrificed on thermals to achieve the size and weight of the laptop.

However, factor in the RAM and Iris graphics and the all-rounder test of PCMark 10 is much more favourable.

Moving onto 3DMark, though, and again the gram 14 struggles to keep up with others with the same Iris Plus Graphics.

So while the LG gram 14 is good for general day-to-day office tasks. You’ll want to look elsewhere if you need to run anything more demanding of raw compute power or if you fancy playing intensive games.

It’s worth pointing out how well the Huawei MateBook 14 did in the same tests, despite its much lower price point.

With the ultra-portable LG gram 14, you won’t run out of power very often because once fully charged, the 72Wh battery keeps me working for 2 days (or a very long one).

In our benchmark test, it lasted eight hours and 31 minutes looping video at a constant screen brightness of 120 nits.

That’s not too bad, but it’s also outpaced by lots of rivals. Namely the larger LG gram 17, which went almost twice as long at 16 hours. The Samsung Galaxy Book S went over 25 hours.

The LG gram 14 has an HDMI port, to connect an external monitor, projector or even your TV.

It also has two USB-A 3.1 ports, a USB Type-C (Thunderbolt 3) and also a microSD card slot.

That’s very good for modern laptop of this size and weight when so many rivals stick to just USB-C. And the power adapter doesn’t take up any of these ports as it uses a traditional barrel connector.

LG even includes a USB-C to Ethernet adapter in the box for those who need a physical internet connection – perhaps in a university halls that doesn’t have Wi-Fi.

The LG gram 14 is very light but the same cannot be said for its price. It is sold for £1,349 on Amazon and Argos, and it is £60 cheaper on Costco website.

It’s not a huge saving, but with this saving you can, for example, invest in a USB hub to meet your connectivity needs.

This is for the higher-spec Core i7 model, but the cheaper Core i5 option is available from Amazon at £1,065.

Check out our round-up of the best laptops to see what else might suit you.

The LG gram 14 is a great laptop that we easily recommend if things like portabilty and connectivity are top of your list.

You get a pretty good all-round experience here with a decent screen, keyboard and solid enough battery life. Better can be found in rivals for all three, though.

Performance is good for general day-to-day tasks but the design does lead to throttling so more demanding tasks and gaming are out of the question.

The main question here is whether the weight and portability of the gram 14 is worth the fiarly high cost – especially at the Core i7 model we tested.

If the pricetag is a bit rich for you then you’re best off looking at options such as the Huawei MateBook D 14, Acer Swift 5 and Microsoft Surface Laptop 3.