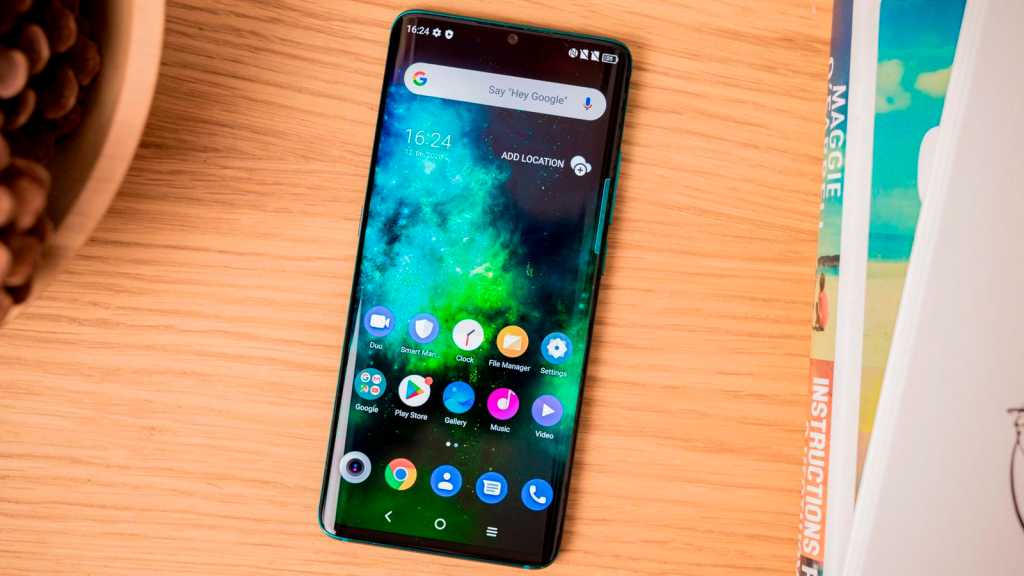 The TCL 10 Pro is halfway between a mid-range smartphone and an affordable one, boasting great features and a high-end design. On closer inspection, however, cracks – like its price/performance balance – start to appear.

The TCL 10 Pro is slim, modern and attractive, and could even compete with higher-end devices. Indeed, it combines a glass screen and back with an aluminium frame, where plastic is the norm for similarly priced devices.

This premium feel is accentuated by its green gradient back, which evokes memories of adventurous colourways Huawei’s P30 series came in.

Despite its good looks, the TCL 10 Pro is very slippery in the hand, which is somewhat frustrating. Thankfully, the phone does come with a basic TPU case in-box, which mitigates the problem somewhat but you may want to consider something more robust.

At the rear, there is a quad-camera module. The main 64Mp sensor is accompanied by three secondary sensors (a 16Mp ultra-wide, a 5Mp macro and a 2Mp depth sensor), along with a dual-LED flash.

Moving to the front, the TCL 10 Pro features a 6.47in AMOLED screen with a resolution of 1080 x 2340 pixels. It’s an HDR 10-compliant panel that paired with that AMOLED tech is superb to look at; although we wouldn’t have expected anything less from a company that specialises in TV manufacturing.

It’s topped, not with a hole-punch like the TCL 10L, but with a dewdrop-style notch in the centre, in which sits a 24Mp front-facing camera.

This phone looks much more compact than its 6.47in display suggests, which is probably due to its 19.5:9 ratio, as well as its impressive 93% screen-to-body ratio. As a result, it should fit comfortably across a range of hand sizes; we found it neither too big nor too small.

Along its aluminium edges, TCL has inlaid physical metal buttons – on the right is the power button and volume keys, and on the left is a customisable button that by default triggers the Google Assistant.

On the top, there is an infrared sensor (IR blaster) and a headphone jack. This is superbly handy when you want to use wired headphones and the USB-C port is currently being used to charge the phone.

After two weeks of use, the TCL 10 Pro has been a joy to handle, especially that curved display.

The only real sticking points were the unreliably-but-fast fingerprint reader (you can replace this with facial recognition), the Google Assistant trigger button which was all too easy to press by accident (it is possible to disable or change its settings) and even with the case protecting it, the phone felt fragile.

The 10 Pro uses the company’s own TCL UI overlay atop Android 10. You’ll find 20 pre-installed Google apps, such as Podcast, Google One, YouTube Music and Google Pay, which we’ve come to appreciate all the more since having tested recent Huawei and Honor devices that lose out on such staples.

TCL UI feels fluid and very easy to get used to, thanks to its logical design. It’s also highly customisable, with features like app sorting by name, label, use, installation, category and even icon colour on offer.

You’ll also find there’s a sidebar (the Edge Bar) on hand to quickly access your favourite features, apps and contacts. It can be activated/deactivated but also modified as you wish.

Diving into some of TCL UI’s more advanced features…

Let’s start with NXT Vision which is used to improve the visual rendering of your videos. It’s worth highlighting that the TCL 10 Pro is Netflix-certified and that the app comes preinstalled. If you enable the NXT Vision option video quality across supported apps, like YouTube and Netflix, can natively stream in HDR.

That aforementioned IR blaster also means you can control your smart TV, air purifier or projector from the 10 Pro with minimal setup.

Chances are you’ve never heard of Super Bluetooth mode. It lets you pair up to four devices to the Pro and is great for sharing media to speakers or Bluetooth headphones en masse.

To round out the experience, the phone’s Always-on Display is an appreciated inclusion, letting you check the time and notifications at a glance.

The triple view mode allows you to get 3 previews of your subject to be photographed (Original, Ultra Wide Angle and Low Light Video), then you just have to choose the one you like.

On the back, the TCL 10 Pro is equipped with a quad-camera setup that is almost the entire width of the phone – impressively though, it sits flush against the phone’s back.

In this quartet, the absence of a telephoto lens is the most notable omission, but the versatility that remains is still promising.

The pictures this phone takes are unquestionably eye-catching, although they may not be to everyone’s tastes, with some deeming them too saturated or bright.

On the other hand, things break down when zooming up to 10x, (see below), with blur and artifacting that’s easily visible to the point that they look like paintings. as a rule of thumb, don’t zoom in when taking pictures on the Pro, wait till after.

As for the Super Night mode, it’s satisfying to see such usable results. The only drawback is that you have to be patient, as the process takes more than a few seconds to work its magic.

If you’re looking for a smartphone with balanced camera capabilities, including decent day and night shooting, we’d recommend a Google Pixel 3 or the Huawei P30 Pro, whose pricing has plummeted since their release in 2019.

The overall performance of the TCL 10 Pro isn’t bad at all. During our testing, it presented as responsive and fluid, which is quite surprising when you consider that it runs on an ageing Qualcomm Snapdragon 675 processor, released in 2018, even if it’s supported by 6GB of RAM.

In real-world testing, we didn’t experience any noticeable slowdown or lag, with the phone remaining smooth and pleasant during the length of the review process.

Under artificial conditions, it does better than a Samsung Galaxy A51, which is equipped with an Exynos 9611 and the Motorola Moto G8 – with its 665 chip and 4GB RAM.

The TCL 10 Pro is perfectly at home with everyday tasks (web browsing, email, social networks…) but it is not a gaming smartphone unless all you’re planning on playing is Tetris or Solitaire.

In testing the battery lasted more than a day with moderate use. If you decide to stream content in HDR or use those cameras extensively then logically its lifespan will shorten.

TCL sells the 10 Pro with a fast 18W charger, which respectably reaches 37% charge after just 30 minutes. A full recharge from 0% to 100% takes precisely two hours.

The TCL 10 Pro is available on Amazon in two colours, Forest Mist Green and Ember Grey for £399.99. At this price, you get a smartphone combining 6GB RAM, 128GB of storage, a 4500mAh battery, a Snapdragon 675 chip and a quad-camera setup.

Given its price, we’d place it against mid-range rivals like the Apple iPhone SE and Samsung Galaxy A51.

The TCL 10 Pro is part of the first wave of phones designed by the brand. It is a successful bet in terms of design (with that curved screen), not to mention its cameras and user experience aren’t half bad either

However, there are some (beginners’) mistakes here. Indeed, at this price, some blend of a more up-to-date chipset, water-resistance or even just stereo speakers would make for a more worthwhile offering

For an extra £70, you can get yourself the more powerful 128GB iPhone SE (if, of course, you don’t mind switching from Android to iOS). Decide to stay within the Android camp and you have great options with superior shooting chops and even 5G, thanks to devices like the Oppo Find X2 Lite.