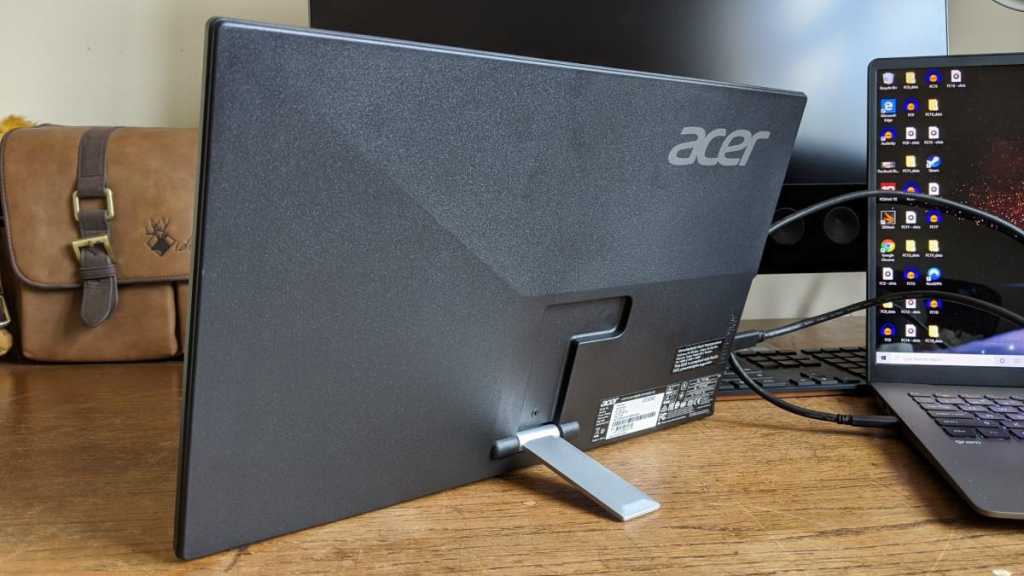 It doesn’t have the highest quality display and isn’t exactly svelte, but for basic tasks on a budget the Acer PM1 will do the trick.

Thanks to technology advancements such as USB-C, portable monitors are becoming more popular and if you don’t have loads of money to spend then the Acer PM161Qbu is one of the most budget friendly options on the market.

As can often be the case with cheaper tech products, the Acer PM161Qbu isn’t the sleekest monitor around.

It’s made of cheap, chunky plastic and doesn’t feel particularly premium – especially compared to the Lenovo ThinkVision M14 which tapers to just 4.4mm and weighs only 570g.

The Acer comes in at 20mm and 970g, which is by no means bad but you’ll need to splash more cash if a svelte design is important. Acer does include a pouch to transport the monitor in.

Chunky bezels and exposed metal around the ports don’t help the PM161Qbu win any style awards and only add to the budget feel.

A single, and fairly narrow, kickstand at the rear is quite stiff making it a little tricky to get out but then offers good support when the monitor is in use. It doesn’t have a huge amount of adjustment but 15° to 35° should be enough for most tasks.

What Acer has done better than other portable monitors is the control. A simple set of buttons on the side might be a little clicky but they do their job, making it easy to access the OSD and make adjustments to things like brightness.

What the PM161Qbu lacks in design and build, it makes up for to some extent with the display itself.

That’s because in many ways, Acer had managed to match the ThinkVision M14. It’s an IPS display with a Full HD resolution and a 7ms response time. Lenovo offers 6ms but the pair are essentially the same.

Acer offers a larger 15.6in size which isn’t quite as good for portability but the extra real estate will be worth it for some.

Thanks to the IPS technology, there’s good viewing angles – important when the display is a second screen – but the display does suffer a bit when it comes to other performance metrics.

Acer quotes a peak brightness of 220 nits but testing with a Spyder X, I found the PM161Qbu maxxed out at just 173 nits. It also, at only 6-bit, doesn’t have a whole lot to offer when it comes to colour with only 65% of sRGB and 49% of Adobe RGB.

It’s clear that this monitor is aimed at being a second screen for more basic usage, rather than anything professional like photo editing.

The brightness is probably the main issue here since it affects all users, especially if you want to use the PM161Qbu outdoors – but it does at least have a pretty effective matt finish and anti-glare coating.

This portable monitor, like most arriving at the moment, has USB-C connectivity, making it a great companion for modern laptops.

Most will be able to drive the monitor for data and power with a single cable – you need a USB-C device with DP-Alt mode, though, which is rarely listed on a spec sheet. If you’re not sure whether your laptop will work, contact the manufacturer to find out.

Otherwise, the PM161Qbu also has Micro-USB for power when needed. The supplied cable is too short, though.

The Acer PM161Qbu comes in at £169 in the UK or US$179 making it one of the cheapest options for those after a portable monitor.

For comparison, the Lenovo ThinkVision M14 is £249 (or the same figure in US dollars) and the Hanspree HL161CGB starts at £199.

You can buy the Acer PM161Qbu direct, or from Amazon and eBuyer.

The Acer PM161Qbu isn’t particularly nice to look at and has a basic plastic build featuring chunky bezels.

It is still portable, though and these design choices are here to hit a lower price point than rivals so this is a good choice if you want a portable USB-C monitor without breaking the bank.

For basic tasks, the monitor does the job offering 15.6in of real estate at a Full HD resolution and IPS panel technology for good viewing angles.

It’s lacking in brightness and colour gamut, though, so you’ll need something else if you want to use it for colour sensitive applications like photo editing.