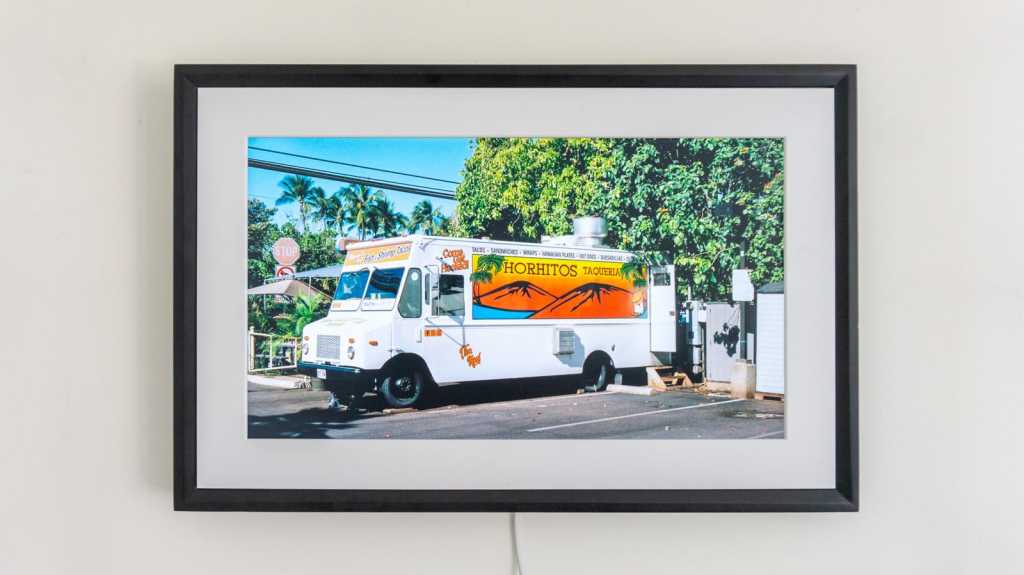 The Meural Canvas II is a great way to display your own photos or favourite artworks, but with a high asking price and an ongoing subscription fee it’s simply too expensive for what’s on offer.

The Netgear Meural Canvas II is a niche prospect: a smart art frame designed to display either famous art works (paid for through a separate subscription) or your own images.

It’s expensive enough that most people wouldn’t even consider buying one, but affordable compared to actual art – and has the added bonus that you can change images as often as you want.

Fantastic picture quality helps justify the outlay for a Meural Canvas, but dodgy gesture controls and connectivity issues make it a harder sell. Ultimately this is a great bit of kit if you can afford it, but it’d be hard to call it good value.

Design and build: A blank canvas

From start to finish the Meural Canvas II is designed to look like, well, a canvas. Instead of slimming bezels, as we’ve seen on phones and laptops, the Canvas II leans into its chunky white borders, intentionally reminiscent of framed artwork.

There are two sizes available – 41x61cm (16x24in) and 48x74cm (19x29in) – and four frame styles: white, black, light wood, and dark wood. Beyond size, the specs of every model are the same, though prices vary according to the size and finish.

I tested the smaller frame in black and I’ll admit I was surprised by how plasticky the whole thing feels. I expected a little more polish from a product that starts from £600/$400, but in fairness that impression fades quickly once you’ve got the Canvas mounted on the wall – after all, this isn’t a product you’re likely to be picking up very often.

Mounting is as simple as it would be for any picture frame, with both vertical and horizontal options. Buy the optional swivel mount and you can easily swap between them on the fly too. The only thing to remember is that you’ll have a power cord to worry about: if you can run it through the wall then great, but otherwise you’ll have to live with it trailing down to the floor below the frame.

The power cord connects into the frame at the back, but the Canvas’s other ports are hidden behind a small door on the side of the frame: a Micro USB port, SD card slot, and Ethernet socket. You can use the USB port or SD slot if you want to display your own images, though it’s also possible to add them via the cloud.

If you can hide the power cable, the Meural does a decent job of camouflaging as a real frame. If someone gets up close they’ll be able to spot the difference, but at a distance the effect works, and mostly hides the fact that this is in reality just yet another screen in your house.

Display: A work of art

Speaking of that screen: it’s good. Really good – though there are some downsides to be aware of.

Depending on the overall Canvas size you’ll get either a 21.5in or 27in display, but either way it’s 1080p. A higher resolution 4K option would certainly be a welcome upgrade – one for the Canvas III I suspect – but picture quality is strong enough that you’ll likely forgive being limited to Full HD.

It’s an AHVA LCD – essentially the same sort of thing as an IPS – so you’re not getting OLED here. But you probably wouldn’t want it anyway, as the risk of image burn-in would be too great if you decided to keep the same artwork on display for a while.

Besides, a good LCD screen like this one can offer phenomenal colour accuracy, which is one of the most important things in displaying photography or paintings. Together with the display’s matt finish, this is about as close as you could get to it looking like a framed print.

There are still giveaways. Netgear has done its best to hide the telltale LCD backlighting – the chunky white border perhaps playing a part – but you still catch it occasionally. More frustrating are the viewing angles, with images fading noticeably as you move to the side. It’s not a dealbreaker, but you will want to consider it when deciding where to mount the Canvas.

There’s one other thing to be aware of: the aspect ratio. The Canvas display is 16:9, like a TV. Most full-frame photographs are in 3:2, and paintings come in all sorts of sizes, so be aware that you’ll almost always have to see images either cropped to fit, or surrounded by black letterboxing.

From a hardware perspective the Meural Canvas II mostly impresses, but unfortunately the software experience is inconsistent at best.

Setup requires you to use a separate phone or tablet, and I had numerous issues connecting my review sample to my Wi-Fi network. Hours of frustration and two factory resets later I got the Canvas connected, but at this price you should be able to expect a smoother setup.

Once it’s up and running you can either control the Canvas with the phone app or use on-device controls. Both are unpleasant in their own different ways.

The on-device settings are locked behind some half-baked gesture controls that see you wave your hands in front of the frame to swipe around the UI. If I was being charitable I would suggest these gesture controls worked maybe one in ten times, and even then they’re slower and more cumbersome than the app.

A few discreet buttons would have done wonders here. As it is, you’ll quickly realise that you’re better off with the app. This is great, letting you adjust settings, change images, and browse the extensive Meural library – but only when it can stay connected.

Persistent connection issues meant that I was usually told that my Canvas was offline when I tried to connect to it, leaving me with no way to connect to it. Trying to fix this from within the app guides you back to setting it up from scratch – no thanks – leaving little option but to wait and hope it finds its way back online.

Price: A picture is worth a thousand pounds

The real stinger though is that for all of these technical issues, I still haven’t gotten to the heart of the Meural’s problem: that after spending the best part of a grand buying the thing, you won’t be able to display any art beyond your own images and a few free samples unless you pay up again.

The Meural Canvas II starts from £599/$399 for the smaller size with a plastic frame, and goes all the way up to £829/$699 for the larger model with wood. That’s a lot more than any other digital photo frame we’ve reviewed, though admittedly it packs a larger display and a few unique features.

But beyond that, to get the most out of your Meural you’ll also need to pay the $8.95 monthly membership fee (or $69.95 annually), which gets you access to a library of more than 30,000 artworks.

Even that doesn’t even get you everything, because some artworks aren’t even included in the subscription, requiring you to pay an extra fee to download them.

It’s understandable that art shouldn’t be free – especially when it’s a mix of old classics and modern works, meaning by paying you’re helping to support new artists – but with a steep up-front price for the frame, a monthly subscription fee, and additional charge for some works, it’s hard to see the Meural model working for anyone who doesn’t have money to burn.

The Meural Canvas II looks the part, and while the display has limitations it’s still the best option around for displaying your own photography or hanging digital artwork on the wall.

The problem is that between the high price of the frame and the ongoing subscription you’ll have to pay a lot and keep on paying – which would be more forgivable if it weren’t for the Wi-Fi problems and dodgy gesture controls.

If you can afford the price then the software frustrations are worth putting up with, but for most of us that will be harder to justify. Netgear might need to go back to the drawing board.