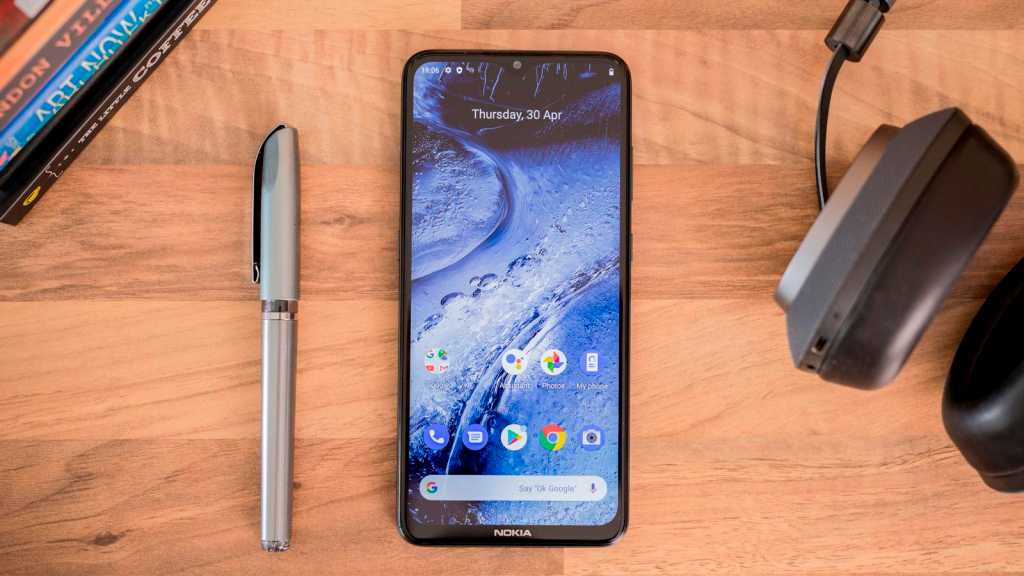 The Nokia 5.3 saves on the old purse strings, but you’ll have to put up with some flaws.

Nokia is back with another affordable handset with the 5.3. It was announced back in March alongside the Nokia 8.3 5G and the Nokia 1.3. As with many things, the pandemic has delayed launches across numerous countries, but it’s now available to purchase in the UK and the US.

I spent some time with the Nokia 5.3 to see what the high points and low points are of this budget phone. Read on to see all the details – you can also check out our full roundup of the best Nokia phones on sale right now.

The design of the Nokia 5.3 isn’t anything revolutionary, but it’s clean and refined with curved edges and a matt black finish (it also comes in cyan and gold in certain markets). You get a fingerprint scanner on the back of the phone, as well as a circular quad camera just above it in the traditional Nokia circular style.

The IPS display measures 6.55in and is made from Gorilla Glass 3, with a water drop notch camera that results in an 82.3% screen-to-body ratio. Though you get a large display, the resolution is 1600×720 pixels, also known as HD+. This means that text and images aren’t quite as sharp or detailed as they would be in a phone with a FHD display – the difference is noticeable side-by-side.

Though the screen is bright enough to view indoors, it’s too dim to be fully visible under direct sunlight. Even when turned up to 100% brightness, you still get some glare.

Every budget phone comes with compromises, and the Nokia 5.3’s biggest is the quality of the speakers. They’re extremely tinny, and actually lose details entirely at lower volumes. I actually thought that it was an audio filter when I first listened to a YouTube video, it’s that noticeable.

Whether this is a deal-breaker or not will depend on what you use your phone for. If you watch a lot of YouTube, or like to stream Netflix from your smartphone, then compromising on this area is a big ask.

The UK version of the 5.3 comes with 4GB RAM and 64GB of storage, though other international markets get either 3GB or 6GB worth of RAM. There’s also room for expandable storage with a microSD card, but as this comes integrated with Google Drive and Google Photos, you should be able to save space by uploading them to the cloud.

The 5.3 runs on a Snapdragon 665 processor, which is a decent mid-range chip. The phone runs quite quickly and is responsive to most tasks. It’s not a device you should be using for heavy mobile gaming, but I tested out Pokémon Café Mix and that ran without any issues, so the odd game here and there should be fine.

Looking at our benchmark tests, the Nokia 5.3 sits close to the likes of the Moto G8, which runs on the same processor and has the same RAM but comes with a punch-hole camera and is about thirty pounds more expensive at the time of writing.

The main 13Mp camera itself is rather good – it produces bright and contrasting colours and details are nice and sharp. To the untrained eye, you wouldn’t ever guess that some of the photos were taken on a phone of its price point.

However, the other modes don’t really match up with the core camera. Whilst the wide-angle camera is a nice-to-have, at 5Mp the quality significantly drops and the colours look extremely faded and muted. You do get a lot more in the picture, but for travel shots you’d be compromising on the scenery.

The dedicated macro lens suffers in part because it struggles to find focus. Even when it does, the low pixel count is a hard limit on how much detail it can capture – you actually get a better photo if you use portrait mode.

There’s also a night mode on both the normal and wide-angle cameras. Whilst this does lift the colours and make photos less dark, it gives them a blown out and unnatural feel. It’s better on the main camera than the wide-angle lens, but that’s to be expected considering the difference in the quality.

Portrait mode includes a feature I’ve never seen before: the ability to choose the shape of where the lens focuses. You can use the normal mode, or choose cookie-cutter shapes such as a heart, a star or a butterfly. Personally I don’t really see any use for this in selfies, as typically in portrait mode you want to focus on the individual and not the background, but this comes down to user-preference.

Here’s one of the selling points of the Nokia 5.3: its 4000mAh battery. Nokia claims this gives the phone a two-day battery life.

Whilst I didn’t quite manage two days, I would on average manage about a day and half taking video calls, surfing the web and using social media all the while. This is still longer than some flagships, which can burn out after around eight hours, and for a budget phone is pretty good.

The Nokia 5.3 doesn’t come with fast charging or wireless charging. Despite that it managed to top up to 29% charge from flat in half an hour, so you’ll be able to give it a bit of juice on short notice if you need to.

If you’re looking for something with a longer life, then there are other phones at a similar price that we found lasted longer than the 5.3, such as the Moto G8 Power.

The Nokia 5.3 runs on stock Android (as part of Google’s Android One program), and comes with Android 10 straight out of the box. The apps are cleanly laid out, easy to navigate and come with all the standard Google features you need to get started.

As this phone is part of the Android One range, it benefits from monthly updates and will be one of the devices to update to Android 11 once that rolls out to more phones outside of the Pixel range.

The best thing about this is there’s hardly any unnecessary pre-installed apps cluttering up on the phone as you would find phones that run on Android skins, like the Honor 9X.

There’s no denying that for the price you’re getting some good features, particularly with the clear main camera and the simple OS. Interestingly, the Moto G8 matches the 5.3 nearly spec-for-spec, but does come with a marginally better camera on paper.

The trade-off is that it’s £30 more expensive at the time of writing. Whether you’re prepared to spend that for 3Mp more is your call. Another great option for a similar price as the Nokia is the Oppo A5 2020, which comes with a 5000mAh battery and a high-end design.

Alternatively take a look at our full list of the best budget smartphones on the market right now for other phones that come in below the £200 mark.

The Nokia 5.3 is by no means a perfect phone. The poor speakers and low-resolution screen don’t make it the best choice for watching Netflix or YouTube, and there are a few gimmicky features that don’t always work very well, especially when it comes to the camera.

Though the phone has some compromises, those who will be looking at a handset at this price-point may not be entirely put off. You still get a clean design, a large screen, a great battery life, and a decent main camera to get by – all the things most budget users are after.