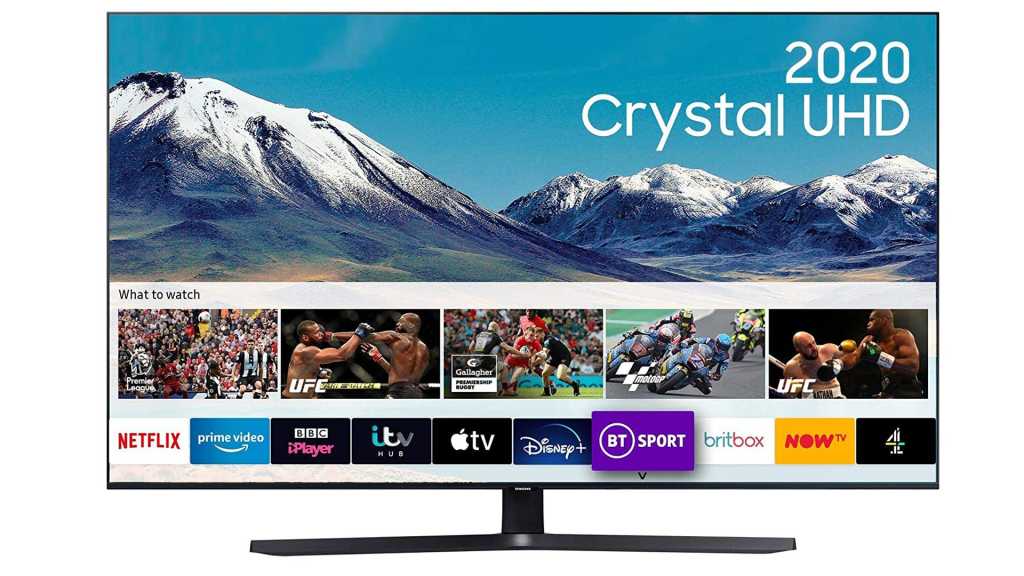 But there are inevitable compromises when it comes to design and picture performance.

The design of the TU8500 is probably best described as unpretentious. It’s not particularly slim, or pretty, although the bezel is certainly minimal. Stereo speakers fire downward from the chassis and the panel sits on a central splayed foot.

The set comes with two remotes: a regular pointer with dedicated buttons for Netflix, Amazon Video and Rakuten TV, and a more streamlined alternative.

Samsung continues to give Freeview Play the swerve, but compensates by loading up its Tizen smart TV platform with catch-up apps from all the mainstream channels, plus a class leading selection of popular streaming services, including Netflix, Amazon Prime Video, Disney+. Britbox, ITV Hub, Apple TV, Rakuten and YouTube.

Samsung also has its own IP delivered channel bouquet. Essentially this is a motley collection of miscellaneous themed services (vintage TV, sports, movies), but there’s enough here to while away some time and you might well find stuff of genuine interest.

But Tizen isn’t just about streaming telly. There’s Samsung’s signature Ambient mode, which gives the panel something to do during downtime, either acting as a JPEG gallery (ie a digital photo frame) or blending chameleon-like into your room decor.

A new feature addition this year is Multiview, which allows you to co-display a smartphone screen. I haven’t found a use for this, although I’m told gamers will sometimes play along to YouTube tutorials, so I guess there’s a point.

We also get voice control via Bixby, Alexa or the Google Assistant, and a Smart Things compatible dashboard, allowing the TV to act as a hub for compatible connected devices.

Despite all this, the user interface doesn’t look overly messy. Most interactions still happen via the launch bar, which has been downsized to accommodate more apps.

The TV is a good option if you’re into gaming. Samsung essentially offers two Game modes, one with Game Motion Plus, and the other without. Opt for Game Motion Plus and you’ll retain elements of the set’s image processing.

If you’re planning on buying a next gen PS5 or Xbox Series X though, both of which will offer 4K/120fps gameplay (not supported here), it might be worth buying a screen higher up the price chain.

Image quality impresses, albeit with caveats.

The set benefits from a new dual LED backlighting system. Rather than use a single colour temperature LED backlight, Samsung has opted for two (5000k and 2000k). This technique improves contrast, giving pictures a little more punch.

This is a shame, as Dolby Vision content from Netflix and UHD Blu-ray disc would certainly benefit from some sympathetic dynamic tone mapping, to prevent detail loss through clipping.

I measured peak HDR brightness at just under 300nits, which means some of the more aggressively graded HDR TV shows just don’t ping the way they can. The set’s black level performance is also limited, a common trait of LED LCD screens at this price.

The set’s audio performance is scalable. Out of the box, it’s perfectly functional, if nothing much to shout about. However, connect a Dolby Atmos soundbar or AV receiver and you’ll unlock its home cinema potential.

The screen can pass Atmos through from any connected HDMI device. It’ll also awaken the Netflix app, which will stream Dolby Atmos over HDMI ARC to a waiting sound system.

That eARC mode can be used with eARC soundbars like the new Sonos Arc, for uncompressed Dolby Atmos pass-through. However that doesn’t mean the set can’t pass Atmos through from a Blu-ray player to a regular ARC HDMI device. It’s delivered as a Dolby Digital Plus bitstream.

It’s not available in the US but in the UK you can get it from Amazon, Currys, Argos, AO, John Lewis and Very.

It’s a lot cheaper than Samsung’s flagship Q80T but there is some strong competition in the mid-range including the Panasonic GX800 and Hisense U8B.

Then you can drop down to amazinly cheap sets like the Toshiba U29 and JVC Fire TV Edition.

Check out our best TV chart for our top 10.

The TU8500 is a reassuringly affordable, mid-range 4K UHD TV that doesn’t short change when it comes to technology and features.

Smart functionality is sophisticated, and image quality good, although I felt there were limitations when it comes to HDR performance due to a lack of peak brightness.

Overall though, everyday usability is high and it’s a great buy for console gamers. The TU8500 is well worth shortlisting for your next set.