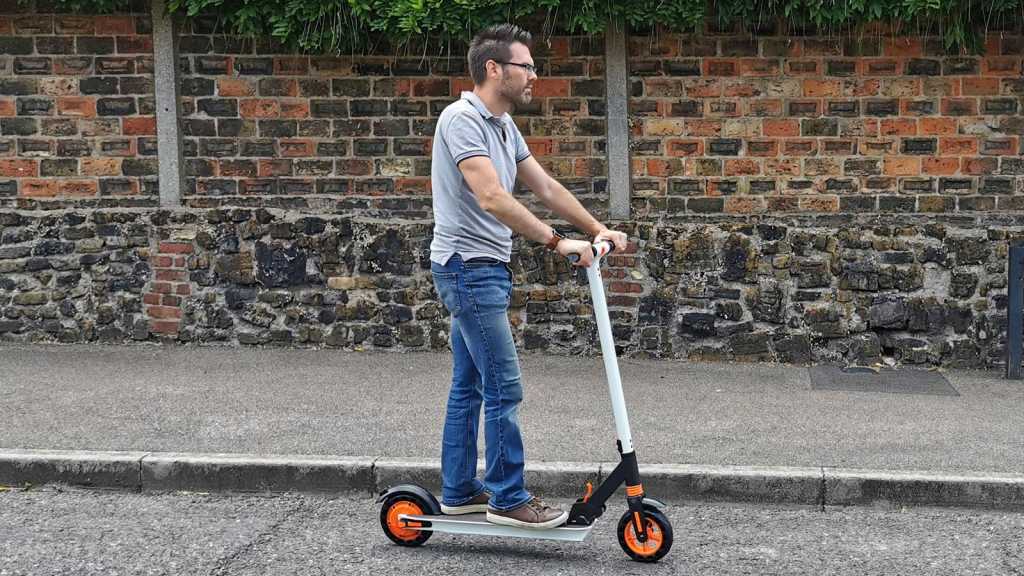 You tend to get what you pay for with electric scooters (and electric bikes) but the Kugoo Kirin S1 bucks that trend. It’s an affordable option compared to premium models from the likes of Innokim which can cost three or even four times as much as the S1.

This is the first Kugoo scooter I’ve tested out, and it’s nice to see the company has a proper website and the option to get one delivered from within the EU (see below) which means less waiting after you order and no import charges compared to buying from China.

The Kirin S1 comes in black or white (both with orange highlights) and is not to be confused with an older model simply called the Kugoo S1.

This new model has a good-quality folding mechanism which you can operate with your foot and which keeps it securely locked in place when folded, unlike some designs. The only small downside is that the handlebars can still turn, which means the scooter’s body can move when you’re carrying it. 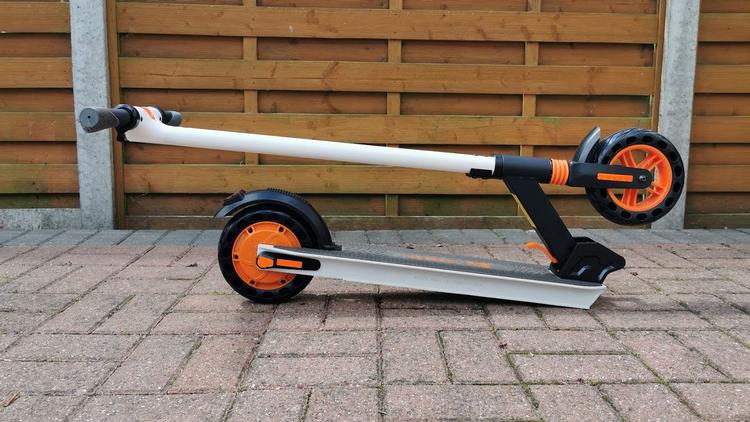 At a little under 12kg, it’s lighter than a lot of electric scooters, and the handlebars aren’t too tall, so it suits shorter people better than, say, the Turboant X1. This is also a bonus when transporting it as it takes up less space and is more likely to fit into your car’s boot (or trunk if you’re reading this State-side).

There are built-in lights at the front and rear, although the rear only flashes when braking and doesn’t double as a taillight. 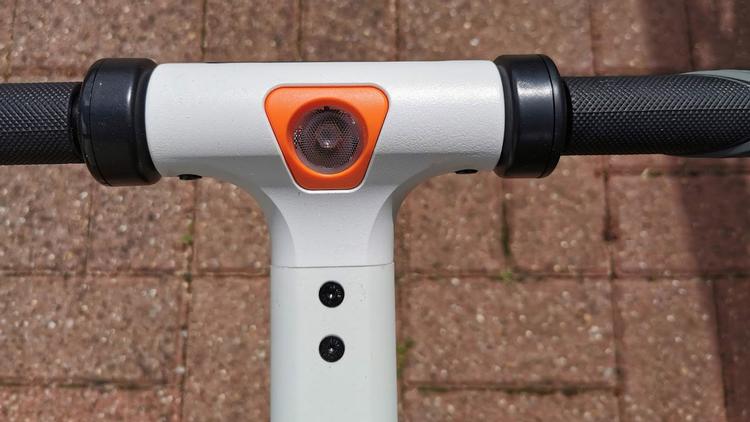 Tyres are 8in and ‘honeycomb’, which means there’s no inner tube and no punctures. Holes around the circumference give a little over bumps, and a small spring at the front offers a hint of suspension too, but the S1 is still most comfortable on smooth asphalt.

Assembly is minimal: you have to connect the wire that joins the display to the body and screw in the four bolts which attach the handlebars to the steering tube. It takes just a few minutes.

Unlike most other electric scooters, the Kirin S1’s motor is in the rear wheel. There are a couple of benefits compared to putting it up front: no external wiring and much less wheelspin when going uphill on loose surfaces.

The battery isn’t removable like the Turboant’s but being in the base is preferable when pushing the scooter uphill as it doesn’t topple forward. Charging is via the port on the side. 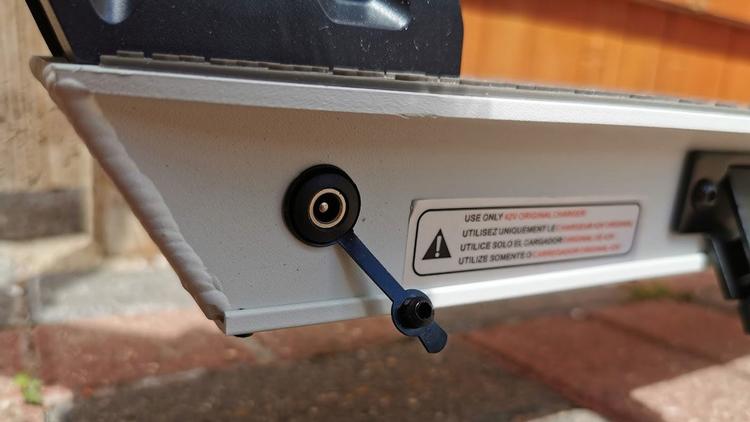 Maximum speed is, of course, limited to 25km/h (15.5mph) but range from the battery (of an unspecified capacity) is up to 25km. That’s in ideal conditions and with a 60kg rider, so expect less if you weigh more, it’s cold and you’re riding up lots of hills.

In my tests, I got around 15km before needing to recharge using the strangely lightweight power supply.

A single button controls everything. A long press turns the S1 on and off, and short press toggles through these three modes. Top speed isn’t the only difference. The available torque also changes, so you’ll feel much more of a surge of acceleration in ‘Red mode’.

A double-press of the button turns the front light on and off, and it’s nice and bright.

This is the main problem with the Kirin S1. It’s just not bright enough so outdoors in normal daylight, it’s all but impossible to see. Cover it with your hand (as instructed by Kugoo) and you can just about make out the battery level and drive mode, but when riding, unless it’s dim or outright dark, you won’t be able to see your speed. The display is actually on in this image and illustrates exactly how hard it is to read on a sunny day. 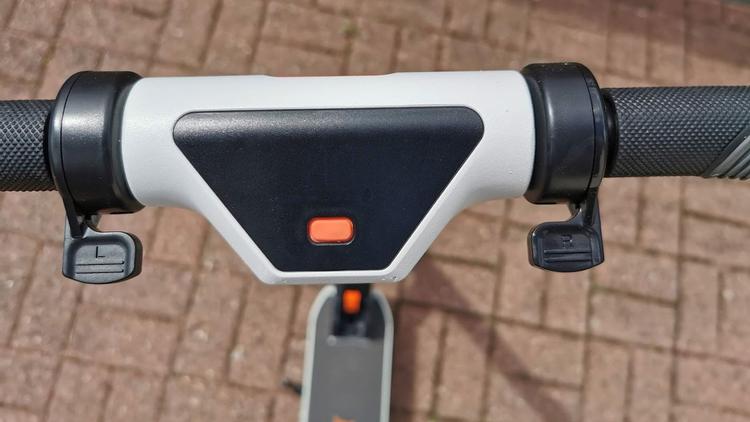 Either side of the screen are levers. The right one is the throttle, and the left one the electronic brake. It’s the first time I’ve tried out a scooter with one of these and it’s a bit unnerving at first. But it works, stopping from top speed in around five metres in dry, flat conditions.

You can also put your foot on the rear brake (the same as you get with a traditional non-electric scooter) to assist the motor braking.

If you want to you can install the Kugoo app. This works over Bluetooth and lets you control the power mode, light and see a more precise battery level.

The main reason to install it, though is so you can disable cruise control if you don’t want that feature kicking in after holding a steady speed for six seconds. There’s also an option to choose ‘Zero-Start’ which means the motor will kick in as soon as you press on the throttle, rather than the default of needing you to push off with your foot and get up to speed.

The option to switch to mph instead of km/h would be useful if the display were visible. 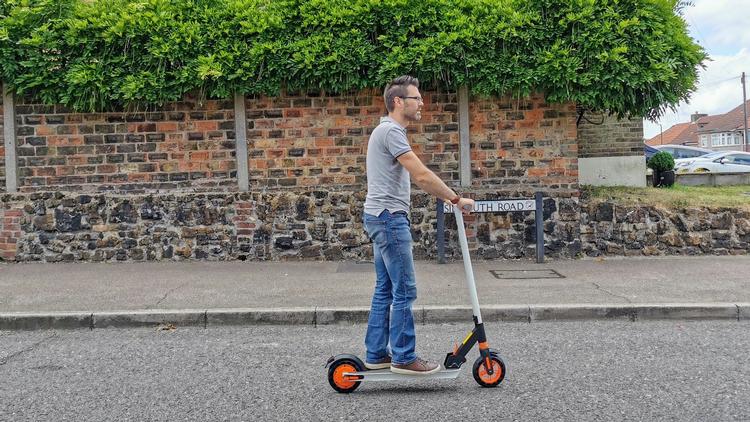 The popular Xiaomi M365 scooter costs around £400 / $500, and if you buy it from Halfords or another UK retailer such as Pure Electric, you’ll pay considerably more than that.

Plus, ordering the Kugoo from Geekbuying’s EU warehouse means no import duty to pay and a wait of around only five days.

For more e-scooter inspiration, take a look at our selection of the best electric scooters.

For the price, the Kirin S1 is well built, not too heavy and offers a reasonable range from the battery. It’s a shame Kugoo released the scooter with a display you can’t actually see unless it’s dark,  but at this price, it’s probably a compromise you can live with.